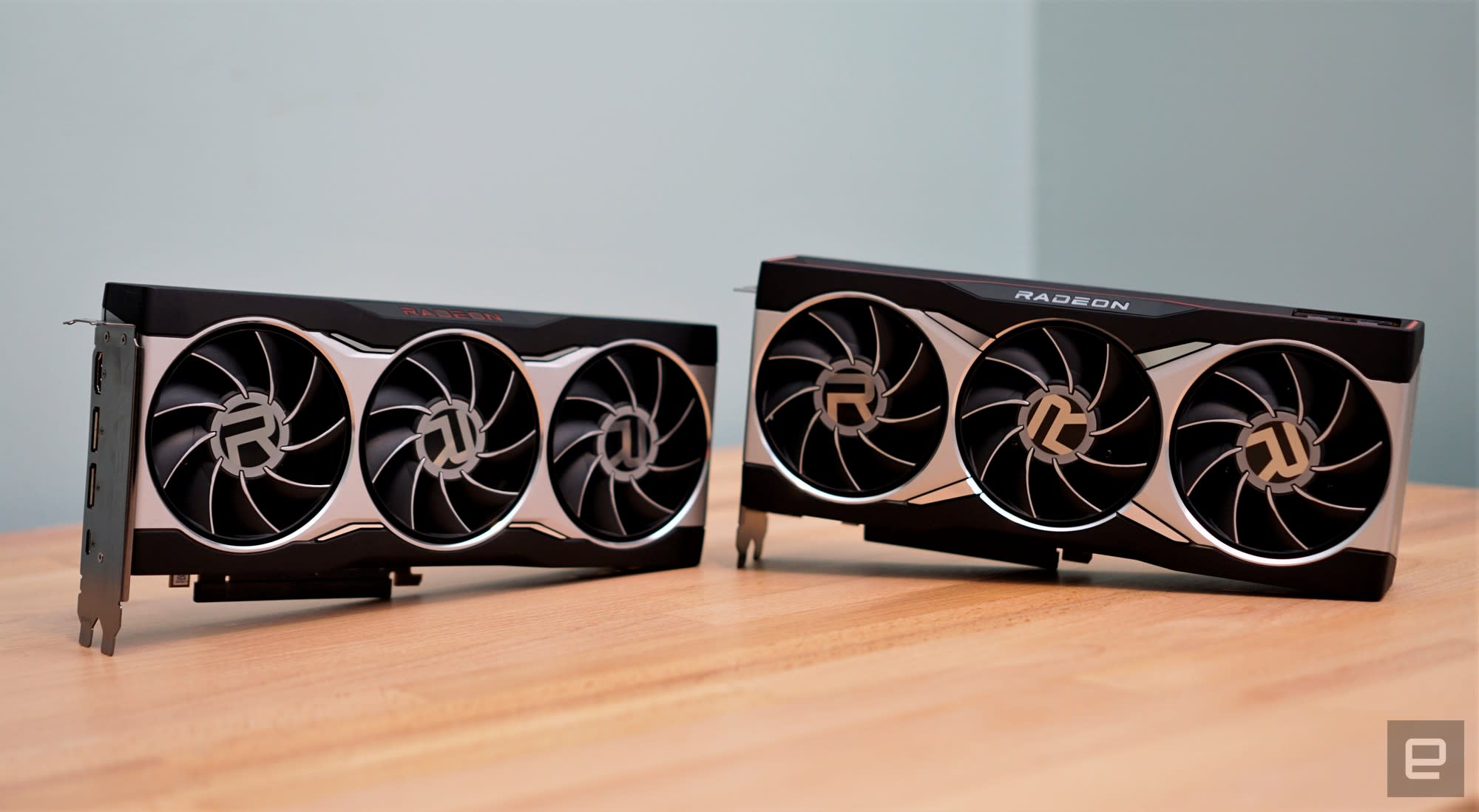 They're solid NVIDIA competitors -- except when it comes to ray tracing.

After years of focusing on mid-range video cards, AMD is making another play for powerhouse hardware with its new Radeon RX 6000 line. Last year's Radeon VII was a notable attempt to stay relevant in the high end market, but it never made much sense for gamers since it was slower than NVIDIA's RTX 2080. The VII was followed up by AMD’s mid-range RX 5000 series, which was more competitive but topped out at the $400 RX 5700 XT. Now AMD has a slew of beefy cards you may actually want: the $579 RX 6800, the $649 6800 XT and the $999 6900 XT. Clearly, the goal is to take on NVIDIA's powerful RTX 3000 GPUs with cheaper alternatives.

Even if AMD didn't unveil these new cards though, you could argue that it'll easily win the GPU war this year. Its RDNA architecture powers the PlayStation 5, as well as the Xbox Series X and S, all of which will bring powerful graphics into more homes than NVIDIA's PC GPUs. But it makes sense for AMD to finally show some love to hardcore PC gamers once again, if only to take NVIDIA's relentless marketing hype down a notch. And after testing the Radeon RX 6800 and 6800 XT over the past week, I can confirm that AMD's new hardware can easily go toe-to-toe with the RTX 3070 and 3080.

What's special about the RX 6800 and 6800 XT is what's under the hood: AMD's new 7nm RDNA 2 architecture, its first with support for hardware accelerated ray tracing. The 6800 sports 60 compute units and ray tracing accelerators, while the 6800 XT boosts both of those figures to 72. They also feature 16GB of GDDR6 memory, compared to 10GB on the RTX 3080 and 8GB on the 3070. Now that 4K gaming is the focus, more memory can impact how well games load and perform, although the RTX 3080 has significantly higher memory bandwidth than AMD’s cards, which levels out the playing field.

The 6800 and 6800 XT make a striking first impression. They're large cards that look like they're carved out of a single block of metal, with three fans cooling a traditional array of heatsink fins. While NVIDIA came up with an entirely new cooling and PCB design for its latest cards, AMD is sticking with a fairly standard design. But hey, at least they've moved on from the annoying single-fan blowers. Both cards rely on two 8-pin power connectors, and thankfully they're at the very edge so you can route cables easily.

All games tested in 4K/HDR with the highest graphics quality settings, on a rig powered by an Intel Core i7-8700K and 32GB of RAM.

Now let's get to what you're really interested in: benchmarks and performance impressions. As you can see in the table above, the 6800 consistently scores higher than the $499 RTX 3070, but that's to be expected since it costs $80 more. The 6800 XT, meanwhile, manages to outdo the RTX 3080 in Hitman 2 and Shadow of the Tomb Raider's benchmarks. But as you can tell from the Port Royal test, AMD lags behind when it comes to ray tracing.

Perhaps that benchmark wasn't optimized for these new cards yet, but it matches with the lackluster ray tracing performance I saw throughout my testing. Control, for example, could only run at 35 to 40 fps in 4K with ray tracing maxed out. On the RTX 3080, it hit around 50 fps (though for actual gameplay I ended up relying on NVIDIA’s DLSS technology to optimize performance even more). Unsurprisingly, these AMD cards were all but useless in the Minecraft ray tracing beta, which were tuned specifically for NVIDIA's RTX hardware. There were some bright spots though: Dirt 5 was able to run between 50 and 60 fps in 4K with ray tracing turned on. That's a game I also tested on the Xbox Series X, but it looked better on PC since I could crank up the visual effects even further.

Both the RX 6800 and 6800 XT hovered around 72 Celsius under load, whereas NVIDIA's latest cards could reach up to 80 Celsius. But while the cooling performance was solid, they're definitely noisy cards. At times, the 6800 XT sounded like it was trying to lift off with my desktop case. If you're noise averse, you may want to consider third-party cards with alternative cooling options.

The big takeaway: Both the RX 6800 and 6800 XT are solid high-end GPUs that can, in some cases, outmatch NVIDIA's hardware. But it still seems like AMD is just getting a handle on ray tracing support, and developers still need to optimize their titles to take advantage of its implementation. So your choice between AMD and NVIDIA's hardware really comes down to what's important for you: raw gaming performance for some times, or better ray tracing support.

Testing these two cards convinced me even more that NVIDIA's RTX 3070 is an incredible value for $499, since it essentially delivers all of the great capabilities of the 2080 Ti for half the price. The 6800 XT, meanwhile, looks like a solid performer if you don't care that much about ray tracing. AMD's 6800 is in more of a curious position, since it's pricier than the 3070, and offers worse ray tracing performance. Perhaps there's a gamer out there who would rather save the extra $70 it takes to get the 6800 XT, but if you're already shopping in this price range, why not go all the way?

Consider the Radeon RX 6800 and 6800 XT a return to form for AMD. They prove the company can finally deliver true high-end gaming, once again. And they also show the value of competition -- AMD evidently hustled to match NVIDIA's lead, but now it's clear neither company can afford to get lazy.