Two months in, it's the social features that keep me coming back.
K. Naudus|05.20.20
@krisnaudus

Animal Crossing gets me out of bed in the morning.

And I don’t mean that in the sense that it gives me a reason to live. I mean, I have to wake up Sunday mornings before noon to catch Daisy Mae to buy some turnips before she leaves. And, on other days, I log on early to check turnip prices, since that number changes at 12pm. These are all just part of the Animal Crossing routine and, now that we’re two months into the game’s release, all of us playing the game have our own patterns we follow on a daily basis.

That’s not news, I know. I’ve played almost all of the main series games (I missed the boat on the original GameCube version) and one of the things I’ve always liked was the relaxed pace and the slow build of the game. It was always about patience; about being willing to wait. I know some people choose to time travel, setting the clock ahead so they don’t have to wait, and so they can jump around and gather resources. That’s not for me. I like the slow burn over months, and even years.

The first month is always the set up phase, where you’re running around like a maniac picking up shells and fruit so you can pay back your loans. You’re a beach bum, sleeping on a cot with cardboard boxes for furniture.

Then after a few weeks you’ve paid off your loans, settled into a routine and started figuring out what you want from your village. Do you want to make an orchard, or a beautiful garden? Do you want to decorate your bedroom like a traditional Japanese house, or in the French rococo style? New Horizons really expanded the options here; you not only get to decorate the island itself with furniture, but you can shape the very land. You want a temple fortress surrounded by waterfalls? Knock yourself out.

Then, finally, you enter into what I call the maintenance phase. You check your shores for shells and your trees for fruit. You see what’s on sale in the store. You shake all your trees and water all your flowers. You see what special guest might be visiting your town. Then you’re basically done for the day.

New Horizons hasn’t really been anything like that. It’s been two months, and I’m still so damn busy. There’s still so much left to do! A lot of this is because they’ve simply packed the game with features; even with all the time I’ve been spending with it (and I have a lot of time to spend these days) I’ve still barely scratched the surface. I haven’t tried terraforming, mostly because I like my island’s layout and have no idea what I’d change. I hunt for bugs and fish (I finished the fossils just the other day). I pop into my neighbors’ houses to see what they’re building. I hang around the plaza to see if any of the villagers are singing (a microphone placed in front of the plaza helps). And I visit my real-life friends.

More than anything, the one thing that makes New Horizons into a time-consuming black hole of cuteness is the community that’s built up around it. Animal Crossing has always had some friend features; the GameCube version let you swap memory cards to visit your friends’ towns, while later editions like Wild World and New Leaf just let you just exchange friend codes to visit online. City Folk even had voice chat (which wasn’t great, but at least they tried). Now, in the era of Switch, if you were so inclined, you could just leave your airport gates open all day and let people pop in whenever they want.

That’s one of the things that keeps me going, in fact — whose gates are open today? Who will drop by if I issue an open invitation to all my friends? It adds a new layer of unpredictability to a game based so much on routine. It gets even more interesting if you were to join AC-dedicated groups on Discord and Facebook or search Twitter for random DODO codes. (Perhaps you’ve seen the story of the girl who got Elijah Wood to visit?) 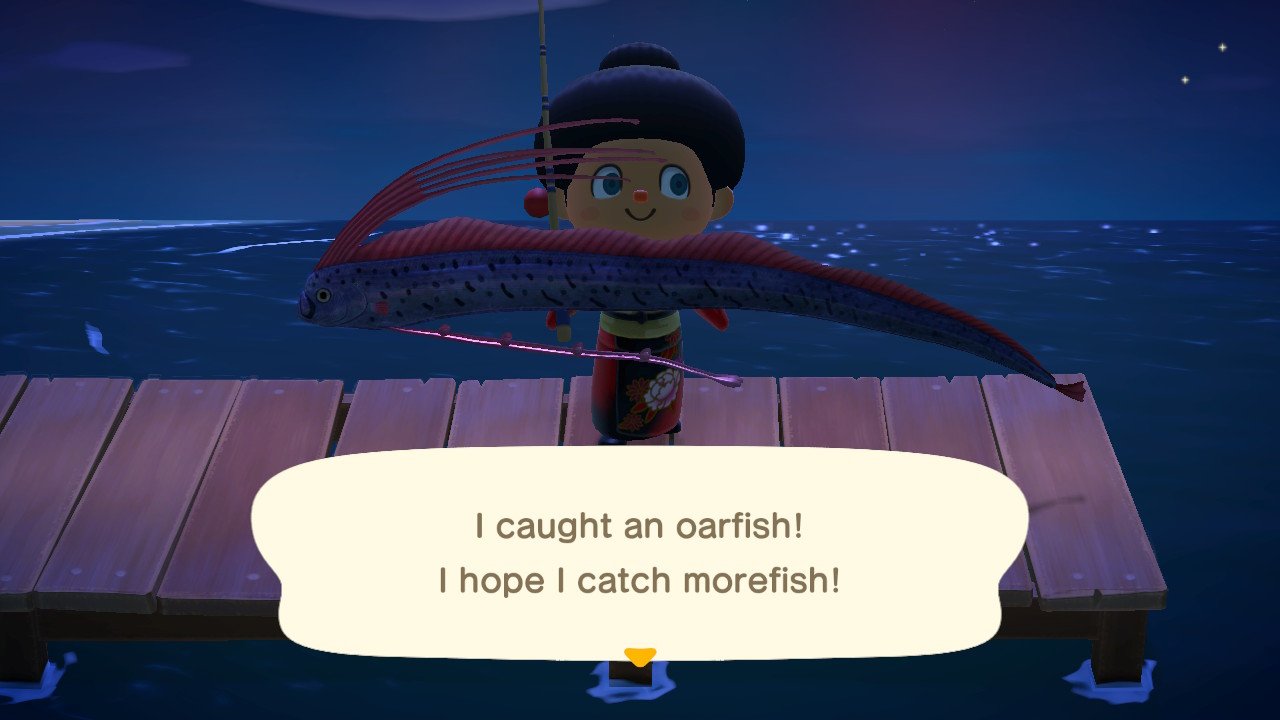 And unlike earlier games, it’s not just about saying hello, exchanging native fruits and quietly judging their island layouts (I’ve seen some ugly villages). Being able to visit my friends’ islands has made the game… longer? Bigger? It lets me reap the benefits of time travel without actually time traveling. One friend chose the Southern Hemisphere for her island, so I can go and catch normally out-of-season bugs and fish. Others are located on the west coast so, if I need to sell something late and don’t want to wait for my shop to reopen, I can pop over to their shops after midnight ET. I even have a friend in Australia, so I get those inverted hours plus Southern Hemisphere fauna. It’s pretty great.

But even cooperation with my local peeps yields huge rewards now. Two weekends ago, one of my groups arranged a flower watering party where we all took turns opening up our islands. The idea was to get all of our plants tended by the group, in the hopes of growing more hybrids. This past weekend there was a cataloguing party, which was sort of like a yard sale in that everyone brought items to be picked up and added to everyone’s individual catalogs. And let’s not even get into turnip price tracking, which has numerous sites dedicated to it. It’s a lot easier to invest tons of bells into the Stalk Market when you know there’s always going to be someone around to set you up with a good price.

All this might seem antithetical to the point of the game, making it feel even more like work. But none of this is actually necessary; there’s no gatekeeping, and you can just play the game on your own for a few minutes a day if that’s all you have the time and energy for. And someday I expect that’s all New Horizons will be for me. But right now, the collective of fans have managed to construct a completely new reality that I can immerse myself in, akin to some of the best MMOs but a lot kinder and cooperative.