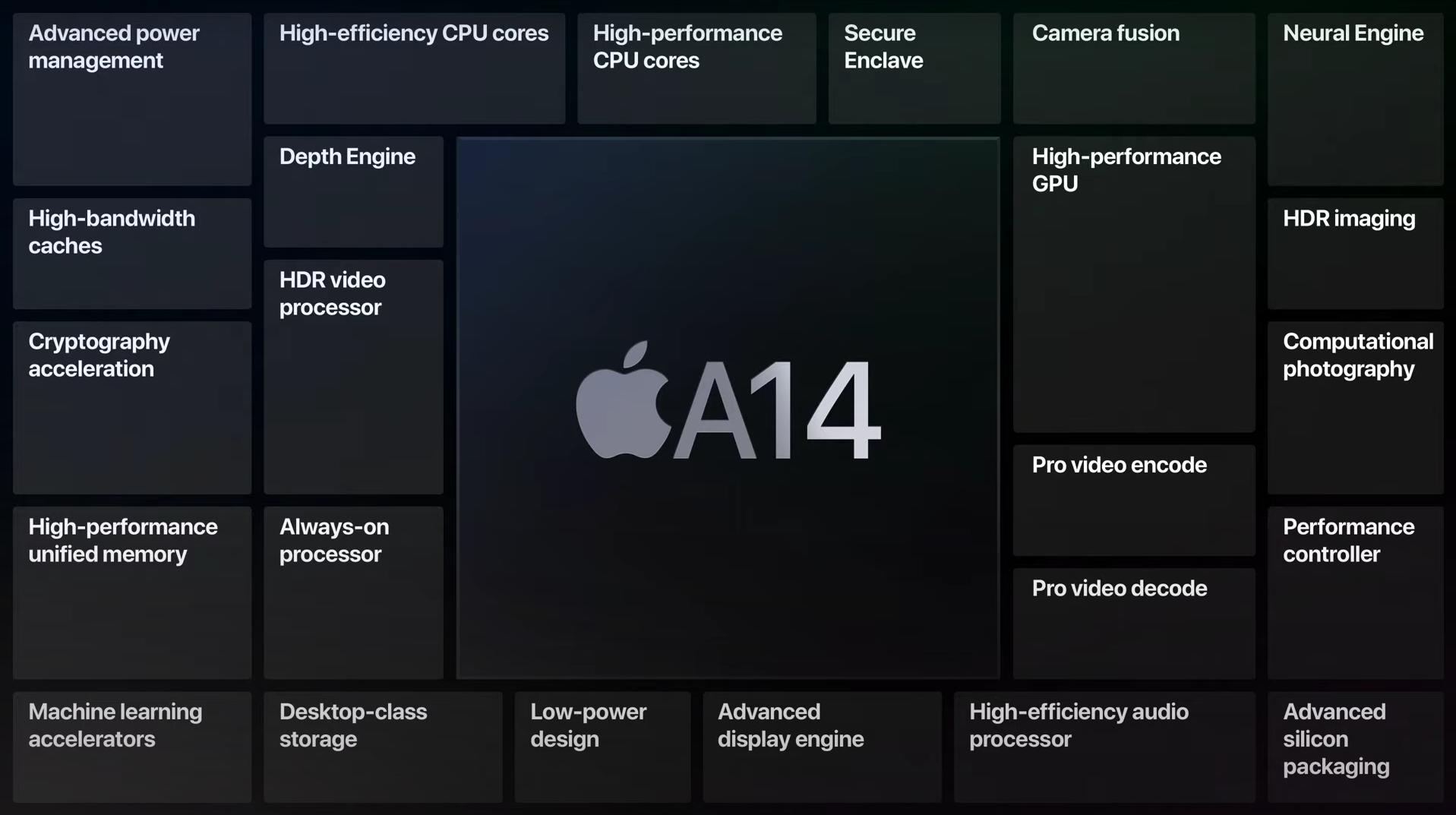 When Apple announced the new iPad Air last month, the most interesting thing about it wasn't its iPad Pro-inspired design or the bevy of new color options. No, it’s what the new Air had lurking inside that slim frame.

To our surprise, the 2020 iPad Air was the first device announced by Apple to use the new A14 Bionic chipset. That silicon’s impact won't be limited to tablets, either -- it will almost certainly power the next generation of iPhones, which Apple will unveil on October 13th. In a conversation with Engadget, Tim Millet, Apple's VP of platform architecture, and Tom Boger, senior director of Mac and iPad product marketing, shed some light on the company's approach to designing the A14, and what it means for the iPad Air and beyond.

At a high level, the A14 seems similar to Apple’s other Bionic chipsets. This system-on-a-chip packs a six-core CPU — two cores high-performance cores and four for lower-priority tasks — just as the A12 and A13 did. The number of GPU cores here has also remained unchanged at four. Don't be fooled by these passing similarities, though: Because the A14 was designed for a 5nm manufacturing process, there’s more going on in this system-on-a-chip than ever before. But let’s take a step back first. The shift to ever-denser chipset designs has been happening for years, and shows no sign of slowing.

The A14 might be the world’s first commercially available 5nm chip, but Apple’s rivals aren't far behind. Qualcomm first 5nm mobile chipset, the Snapdragon 875, could debut as soon as December at the company’s virtual Snapdragon Summit. And then there’s Samsung, which — in addition to manufacturing those Snapdragons for Qualcomm — has begun pulling back the curtain on its 5nm Exynos 1080 chipset.

The main benefit of chips based on these new manufacturing processes is that they’re more densely packed with transistors, incredibly small switches that can control the flow of electrons. These serve as the foundation for logic gates, which beget integrated circuits, which beget full-blown processors.

In any case, the shift to 5nm meant Apple had far more transistors to devote to all the systems on the chip. Think: 11.8 billion, up from the 8.5 billion the company had to work with in last year’s A13 Bionic. As you’d expect, that huge uptick in transistor count gave Apple the extra processing bits needed to build significantly faster, more efficient CPU and GPU cores. But it also gave Apple the latitude to make more subtle improvements to a device’s overall experience.

“One of the ways chip architects think about features is not necessarily directly mapping [transistors] to a user feature in the product so much as enabling the underlying technology, like software in the graphics stack to be able to leverage a new capability in the GPU,” Millet said. “That will inevitably come as a visual feature in a game, or in a snappy transition in the user interface.”

The switch to a 5nm design for the A14 also gave Apple the latitude to devote more of its transistor “budget” to components beyond just the CPU and GPU. And when it comes to achieving the best all-around experience, companies like Apple, Samsung and Huawei -- the only other companies to design chips for their own mobile devices -- have a distinct advantage. In this case, because Apple exercises full control over what goes into its systems-on-chips, it can invest in additional processing cores and components before they go mainstream.

The best example is the company's Neural Engine, a component that debuted in the iPhone X's A11 chipset to accelerate the sorts of neural networks needed for features like secure face unlocking, voice recognition for Siri and augmented reality, among other things. Apple was among the first to integrate a dedicated neural accelerator into its chips — Huawei announced the Kirin 970 and its neural processing unit a week before Apple revealed its own Neural Engine, and Samsung and Qualcomm only caught up later.

That boost was made possible by a big redesign: The A14's Neural Engine now packs 16 cores, compared to eight in last year's A13. Doubling the engine's core count was an interesting choice since many of the iOS features that relied on it already seemed to run well enough. Since that’s the case, why not instead devote more of those new transistors to further ramping up CPU and GPU performance, which most people may more immediately notice?

The answer is two-fold. For one, Apple continues to see huge potential in supercharging neural networks, not just for the sake of its own software experiences, but for the ones app developers might be able to achieve with the right components in place. The popular image editing app Pixelmator Pro, for instance, leans on the Neural Engine for a feature that makes low-resolution images look surprisingly crisp and clean. Meanwhile, on the other end of the creative spectrum, Algoriddim’s djay Pro AI app uses the Neural Engine to more capably isolate vocals and instrument tracks in songs.

“We saw the opportunity to do things that would have been impossible to do with a conventional CPU instruction set,” Millet said. “You could in theory do many of the things the Neural Engine does on a GPU, but you can't do it inside of a tight, thermally constrained enclosure.”

And that’s a nice segue to the other half of the answer, which is that Apple had to balance sheer horsepower with efficiency. After all, there's no point in making sure the horses run fast if they tire out too soon.

There's little debate that the A14 is more impressive than its predecessors, but all of this raises an interesting question: How powerful is this thing, really?

It depends. Apple hasn't yet issued claims about the A14 Bionic's performance improvements over last year’s A13 Bionic -- expect more on that during the company's upcoming keynote. (A set of leaked benchmarks suggests some healthy gains over last year’s chipset, though some are less than impressed.) When Apple revealed the new iPad Air, though, it did say the A14's CPU was up to 40 percent faster than the previous model, and that people could expect up to a 30 percent increase in graphics performance.

It's important to note, however, that real-life performance gains don't always live up to Apple's promises. When the company says the A14's CPU is 30 percent more powerful than the current iPad Air's A12 chipset, for instance, it isn't going off results from popular benchmarking tools you and I have access to. According to Boger, those figures are an amalgamation of "real-world application workloads." In other words, they're composite numbers derived from many different performance factors -- all to demonstrate what it’s like to actually use this thing.

Since I've spent a considerable chunk of 2020 testing Apple's devices, my thoughts quickly pivoted to how the A14 may blur the boundary between the Air and the iPad Pros. After all, the 2020 iPad Pro relies on a souped-up variant of a two-year-old chipset. How does that stack up compared to Apple's new silicon?

On the whole, the iPad Pro still has the edge. It was a blistering-fast machine when we tested it earlier this year, and Millet and Boger were quick to point out that the current model’s A12Z chipset has more CPU and GPU cores -- eight of each -- than the A14 does. That big difference in GPU computing power in particular means the iPad Pro will continue to be better suited for graphical work and the other “high-performance workloads” Apple’s pro users might deal with. But that’s not to say the iPad Air’s chipset is completely outgunned here.

"Because the A14 has our latest-generation CPU cores, you may see a few things here and there that the A14 could potentially outperform the A12Z in," Boger noted.

That Apple built a $600 tablet with the power to sometimes outperform its pro-level hardware is a big deal. What might be more important, however, is the effect Apple's work in designing the A14 could have on the rest of its devices down the road.

As I said earlier, the A14 will power the new iPad Air and likely the company's latest slew of iPhones, but it'll almost certainly wind up in other products too. Just look at Apple's line of entry-level iPads: While they've never gotten the high-end chipset variants made for the iPad Pros, they're frequently refreshed with silicon used in previous-generation iPhones. If you're a fan of Apple's devices, it doesn't matter if you aren't planning to splurge on a new phone or tablet just yet -- there's a decent chance you'll eventually experience the A14.

And even if you don’t, you may still benefit from some of the work that went into it.  When people at Apple start working on a chipset, they're not solely focused on building one for a single product; they take into account the company's entire lineup. “We spend a lot of time working with the product teams and software teams, and the architecture group really does sit in the center of that,” said Millet. In building a product, Apple has to wrangle a laundry list of important components, from the CPU and GPU to cameras and display modules and a bevy of sensors. Connecting all of them in ways that work well falls to Millet’s team, and one of their biggest priorities is making sure the chip-level architecture that weaves them all together is parameterized -- that is, scalable for use in different kinds of devices.

“Ultimately, we want to make sure that when we build a CPU for one generation, we’re not building it necessarily only for one,” he said. While that doesn’t mean you’ll see the A14’s six-core CPU in something like an Apple Watch, the architecture developed for the company’s flagship phone chipset may well be adapted and reused elsewhere. And as it turns out, we might not have to wait very long before to see a great example.

For weeks now, rumors of an iPad Pro powered by a high-performance version of the A14 called the A14X have continued to surface, with some suggesting a launch in early 2021. That alone isn’t unusual; Apple announced its third-generation iPad Pro and its A12X chipset just one month after releasing the A12-powered iPhone XS series. What’s more interesting -- and this is the part you should take with a grain of salt -- is that the A14X is also rumored to be the chipset inside the company’s first commercially available Apple Silicon Macs. Naturally, the company wouldn’t confirm any of this to me, but when asked about whether the company’s work on Mac chips influenced the A14’s development at all, Millet noted that “sometimes it's the constraints of a unique platform that drive invention.”

Ultimately, there’s still a lot we don’t know about the A14 and Apple’s plans for it in the near future. How else will its architecture be expanded or constricted to work for differing hardware? Will what Apple learned from designing mobile chipsets like the A14 give it the tools it needs to take on Intel and AMD? Millet stopped short of discussing these topics in full, but one thing seems clear all the same: Whether or not you buy an iPad Air (or an iPhone 12, for that matter), the impact of Apple’s work on this chipset will be felt for years to come.