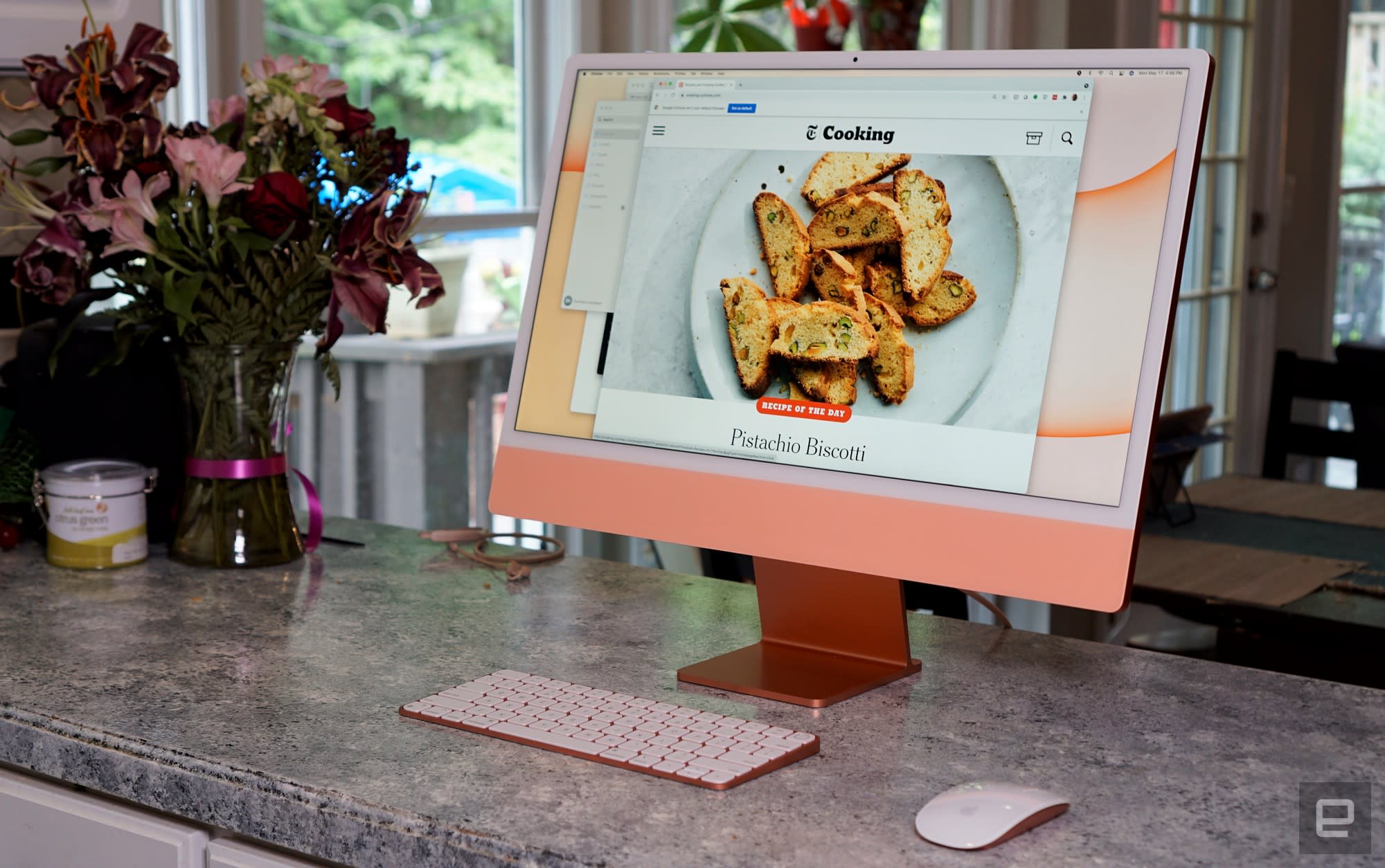 Apple's new iMac is the portable desktop I never knew I wanted. That alone makes it far more intriguing than the last few generations of iMacs. It weighs under 10 pounds, so it's a cinch to move around your home. Its thin and colorful design allows it to fit almost anywhere, even on your kitchen counter. In many ways, this iMac is a reminder of why all-in-one desktops can still be pretty useful, especially for families.

You can thank Apple's M1 processor for the iMac's radical redesign. That chip turned the MacBook Air into a powerhouse that didn't even need a fan. Since it's based on a mobile architecture, the M1 is far more efficient than Intel's competing PC hardware. That means the iMac no longer needs a thick frame and room for complex cooling. The new case is just 11.5 millimeters thin, a mere four millimeters more than the iPhone 12. And most impressively, it's that slim across the entire chassis; there aren't any humps like before. 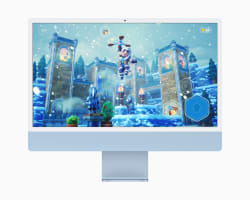 The new case colors also go a long way toward making the iMacs seem more approachable to kids and less tech-savvy users. That was the whole point of the original bubbly iMacs, after all. Those helped set Apple apart from the sea of gray “IBM clones” of the '90s. Now, it seems Apple is trying to rekindle that sense of fun, after being bogged down by staid silver and gray designs over the last decade. Sure, brushed aluminum looks cool, but there's a reason why Apple keeps returning to multi-hued cases in iPhones. It turns out, plenty of people like colors.

I opted for the orange iMac for our review, but Apple should have probably just called it creamsicle. It has a bit of a pinkish hue along the "chin" below the screen, while the rear case looks more distinctly orange. And despite the playful aesthetic, the iMac still looks and feels like a premium device. I particularly like the way light bounces off the back of the sturdy base. The iMac hasn't had this much Pixar-esque energy since the days of the lampshade G4. Hell, Apple could still benefit from following some design ideas from that long-forgotten machine — or maybe I'm just the only one that misses being able to adjust my screen vertically.

There's at least one concession this time around for monitor obsessives: You can also buy the new iMac with a VESA mount, which makes it easy to attach to things like arms and hinges. It would have been nice to see that standard on every model, but I'd wager Apple decided an elegant stand design mattered more than being flexible for a handful of users.

So, the iMac looks cool, but how does it actually perform? If you've seen our reviews of the M1-equipped MacBook Air and MacBook Pro, you already know that chip absolutely trounces most Intel and AMD hardware. And, not surprisingly, the same is true of the iMac. Our review unit, which has the pricier 8-core GPU and 16GB of RAM, hit higher Geekbench 5 scores than powerful gaming laptops like the ASUS G15 and MSI GS66. And it was a dream to use for my daily workflow, where I'm typically juggling multiple browser windows filled with dozens of tabs, along with Slack, Spotify, Evernote and Pixelmator Pro. It also transcoded a 4K clip to 1080p in one minute and 22 seconds. That's 15 seconds slower than the MSI GS66 took, but a full 32 seconds faster than ASUS's ZenBook Duo.

Apple's M1 processor also makes the iMac responsive in little ways. It wakes up almost instantly from sleep mode and gets to the desktop in around 25 seconds from a cold start, which is dramatically faster than any Intel Mac I've ever used. Basically, all of the zippiness I appreciate from the M1 MacBooks is here. The iMac also had no trouble handling any of the games on Apple Arcade, like The Pathless and The Last Campfire. But given that those games already run smoothly on the iPhone and iPad, it's not a huge surprise to see them running well on a more powerful desktop. You'll still hear some fan noise while playing games, by the way, but at least it's more of a gentle whir, rather than the roar of a jet engine.

While the slim new design and powerful processor are nice, the iMac's stunning 23.5-inch, 4.5K Retina Display is its true centerpiece. It covers the full DCI-P3 gamut, which means it can display over a billion colors. Take that together with a surprisingly high 500 nits of brightness — more than many gaming laptops — and the iMac's screen can make just about anything pop. It's one of those displays that makes high-resolution photos feel three-dimensional. Video also looks fantastic, especially if you're watching something with a huge color palette. While the iMac doesn't support HDR, its sheer brightness and color depth almost makes it seem like it does.

This isn’t visible at first glance, but Apple also finally managed to squeeze in a 1080p webcam in a Mac. It’s not quite as sharp as my Logitech Streamcam, but it’s certainly a huge upgrade over Apple’s notoriously crummy computer cameras.

Despite its thin case, the iMac sports a shockingly capable sound system. With its six speakers and force canceling woofers, it did an admirable job of reproducing the diverse instruments and percussive beats from Flying Lotus's Yasuke soundtrack. And it captured the dreamy melody of Thundercat's "Fair Chance" without missing a beat. The iMac definitely won't replace an inexpensive pair of bookshelf speakers, but it's more than adequate for a personal jam session. It can fill a room with sound without any distortion, and it can even handle a decent amount of bass. There's also Dolby Atmos support, which worked so well while watching John Wick, I swore there were speakers right behind me.

The iMac's multimedia prowess was another reason I was so tempted to bring it all around my home. I put it on the kitchen counter to serve up recipes, watch videos and listen to music as I made dinner. I took it out of my basement office and into a guest bedroom because it had better natural light, which always helps me write. It's so easy to move around, thanks to its single magnetic power cable, you probably won't think twice about moving it into your living room to help your kid with homework. The iMac is practically built to be a communal computer, the sort of thing anyone can hop on to handle a bit of work (or play).

It's also far easier to swap between users on this iMac, thanks to its Magic Keyboard with Touch ID. After registering your family's fingerprints, they can get into their accounts just by touching the sensor. That's also helpful in ways I didn't expect on a desktop. Just like on iOS devices and MacBooks, you can use Touch ID to securely authenticate App Store purchases. Honestly, it's surprising it took so long for Apple to bring this feature to iMacs.

When it comes to typing, though, the Magic Keyboard still has that same love-it-or-hate-it design. It took me a while to get used to its shallow keys, and it’s a bit too compact for me to type comfortably. I've never really looked to Mac desktops for ergonomics, though. That's particularly true for the Magic Mouse, which still feels too light and flat. Maybe I'm too spoiled by Logitech's MX Master mouse lineup, but it feels weird to have nothing to rest my palm on. I had a better time with the Magic Trackpad, which is basically an enormous version of what you’d find on the MacBook. Using it just felt more natural than the Magic Mouse. You'll have to shell out an additional $50 to get the Magic Trackpad, or you nab both for $129.

While I probably sound entirely head over heels, there's still plenty to criticize with the new iMacs. For one, the port situation is messy. The $1,299 entry-level model only comes with two USB-C ports. To get four, you'll have to step up to the $1,499 model with a more powerful 8-core GPU. That pricier model also has an Ethernet port embedded in its power brick, which the cheaper iMac lacks. I realize Apple held off on removing USB Type-A ports on the iMacs for a while, but I still miss them. Now your only choice is to clutter your desk with dongles and USB hubs if you want to connect older devices. The same is true if you want to use SD cards, which irks me to no end.

If you can live with those issues, though, the M1 iMac is an incredibly compelling all-in-one computer. As usual, though, be prepared to pay a premium. If you want 512GB of storage, you'll have to jump to the most expensive $1,699 model. Want 16GB of RAM? Slap on another $200. Need more storage? That's an additional $200 for a 1TB drive, or $600 for a 2TB model. Unfortunately, there aren't that many strong PC alternatives. If you're looking for something larger, HP's 34-inch Envy all-in-one is solid, but that's stuck with aging Intel chips.

Really, then, if you're in the market for a desktop, but don't want to deal with the cable mess of a PC and monitor, the iMac practically stands alone. It's faster than ever, and it can fit into almost any nook in your home. It’s basically the family computer, re-invented.