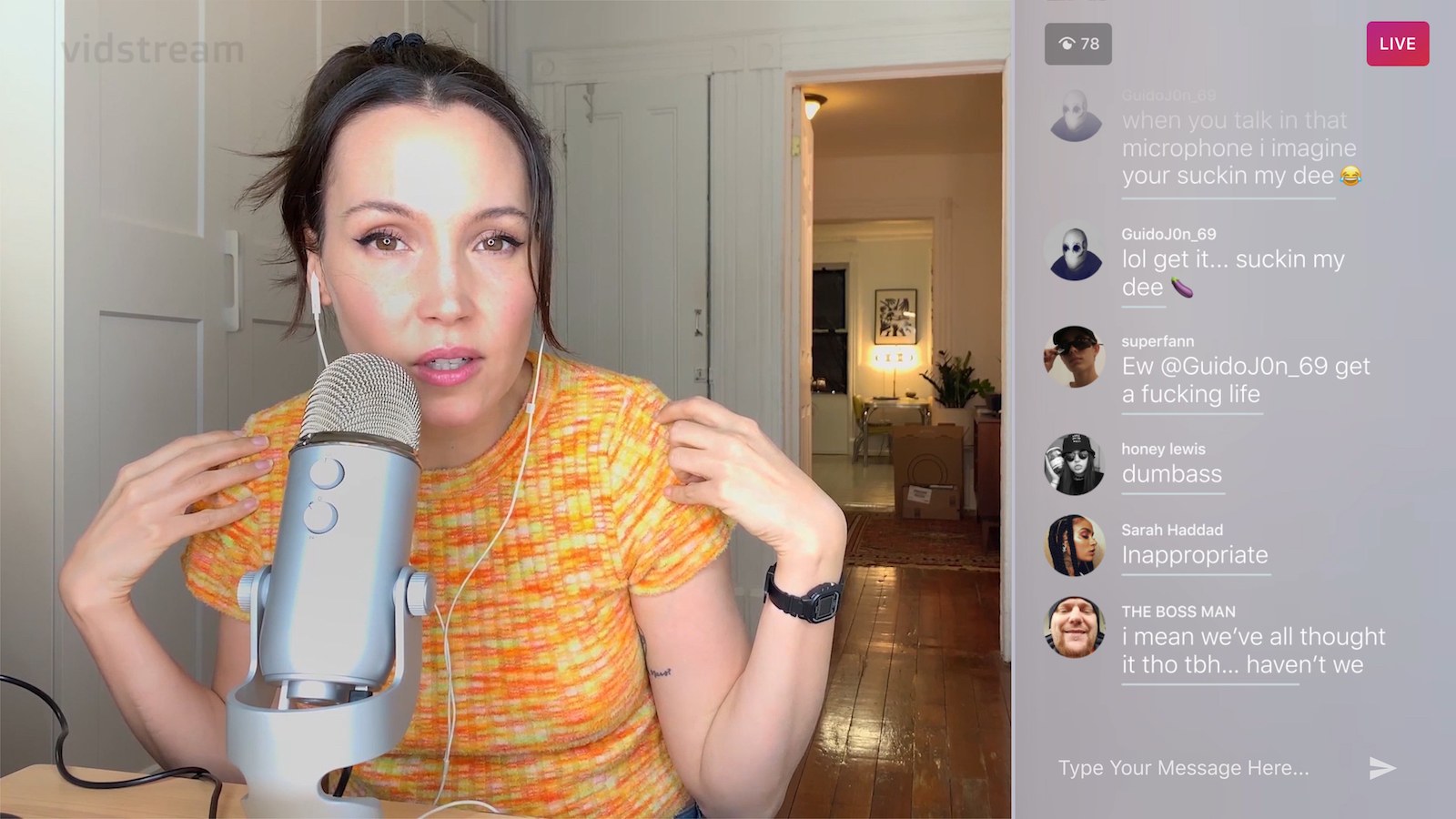 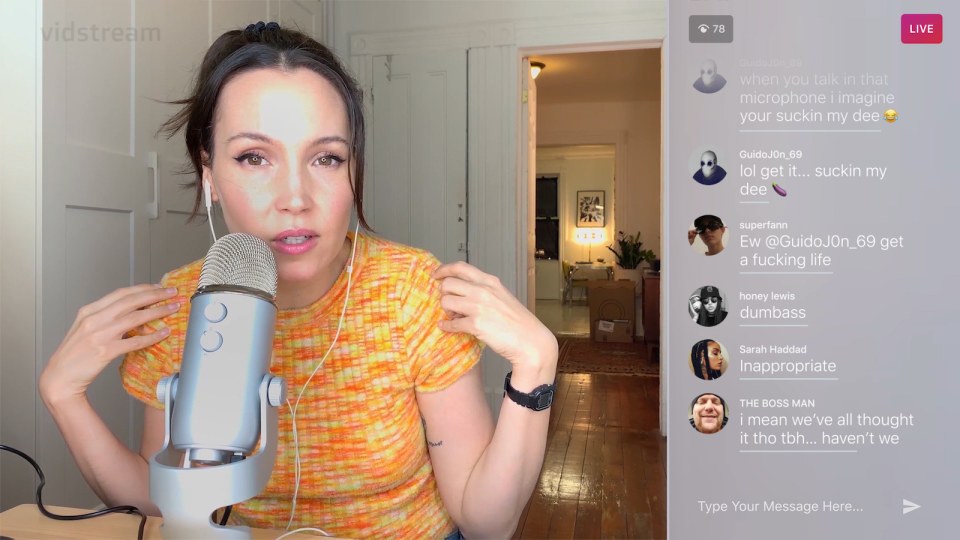 Alexandra Serio stares directly into the camera, a ring light reflected in her eyes and a microphone resting on the desk in front of her. She smiles like she’s just seen an old friend and whispers into the metal mesh, welcoming viewers as they join her live stream. She brushes her hands in front of the lens, teasing the audience with soothing motions. The chat begins to bubble with comments.

Behind her, a closet door is propped open, filled with bulky jackets. A long hallway extends beyond her left shoulder, open to an empty house.

Her tone remains calm and quiet as she strokes the microphone with a makeup brush, wave-like sounds rolling through the speakers. It’s impossible to ignore the empty house beyond her smiling face, especially as the comments become more and more hostile. Despite her tranquil movements, dread sets in.

This is the opening vignette from Tingle Monsters, a short horror film written by, directed by and starring Alexandra Serio. In it, Serio plays an ASMR practitioner named Dee, and the entire 11-minute film feels like a genuine at-home live stream -- blown-out lighting, misspelled comments and all.

ASMR stands for Autonomous Sensory Meridian Response, and it’s a relatively new field of self-care spawned by the YouTube generation. In the bulk of these videos and live streams, women with fantastic manicures tap, scratch and trace everyday objects right next to powerful microphones, amplifying their comforting sounds. Or, an ASMR practitioner will whisper kind phrases and affirmations with their mouths extremely close to the mic, catching every pleasant pop and tsk.

People who experience ASMR find these videos calming, describing the feeling as “tingles” that flow from the crown of the head, down the neck, shoulders and spine.

“An overwhelming majority of ASMRtists are female, so that type of altruistic nurturing felt like fertile ground to build a narrative on top of, examining how violence against women begins with words and how this affects women's real-life treatment,” Serio said.

"Violence against women begins with words."

Serio is Chief Content Officer at Nameless Network, the company behind the Webby-nominated Everything Explained video series and the Museum of Pizza, an infinitely Instagrammable pop-up that appeared in New York City in 2018. She’s monitored the responses to Nameless Network’s YouTube videos and social media posts over the past six years, and during that time, she noticed a trend.

“As a content producer, I have always been struck by the difference in the comment section on videos hosted by women, which usually focus on the female host's appearance, the way her voice sounds or what she chose to wear,” Serio said. “On male-hosted videos the comments section typically focuses on what is being presented in the video.”

Misogyny is nothing new, but YouTube comments sections offer a fresh outlet for these deeply ingrained, harmful perceptions to shine. Written out in all-caps or all-lowercase lettering, spelled correctly or grammatically unhinged, finished with an “lol” or a “bitch,” people who present as women on the internet encounter hate and disrespect regardless of the content they’re producing, based solely on their perceived gender. It’s inescapable and well-documented. Combine this truth with the intimacy of ASMR videos, and it’s a recipe for hypersexualization.

Serio discovered ASMR four years ago and immediately recognized the healing power these videos can have.

“I was struck by how these practitioners, or ASMRtists, view what they are doing as a healing service, a sort of digital cure in the age of digital maladies like generalized anxiety and insomnia,” Serio said. “They use the medium of ASMR to simulate a digital form of intimacy.”

Serio wanted to capture this tension between the friendly tranquility of ASMR videos and the constant threat of harassment that women face online, which is why Tingle Monsters is a straight-up horror film. With a runtime of just under 11 minutes, Tingle Monsters builds tension beautifully, with subtle framing choices and a “live” chat scrolling down the side, packed with authentic-sounding comments. Throughout the film, it’s clear that something is going to happen, but viewers are left guessing until the terrifying reveal.

“Horror is such a rich, comprehensive genre that really pushes the medium of filmmaking forward,” Serio said. “I think my favorite thing about horror is its capacity for allegory, social commentary, titillation, comedy and mass appeal to exist within the same narrative. In this day and age it's a privilege to have people watch your work, and horror's built-in audience helps amplify the message.”

Serio sees Tingle Monsters as a conversation-starter. It’s a clever and memorable film that encapsulates the real-world fear that many women feel when interacting with trolls and abusers online. Tingle Monsters says, clearly and with heart-pounding imagery, This is the situation. Now what are we going to do about it?

“Too often we think of misogyny as something that men do to women, when actually it's something people do to women,” Serio said. “We're all complicit if we accept the harassment of women in digital spaces as something that cannot be changed or affected. Tingle Monsters invites its audience to acknowledge where we are in the hopes someday we can change.”

Tingle Monsters will debut online on May 20th, on the film’s homepage. It’s already been selected for a handful of festivals, including the Cleveland International Film Festival 2020 and Cinequest Film & Creativity Festival 2020, both of which are Oscar-qualifying events.

Serio hopes Tingle Monsters will strike a chord with people who have never experienced gender-based harassment, driving home the all-consuming, physical unease that accompanies hateful online commentary. Many women understand this feeling all too well, but it’s difficult to communicate. Tingle Monsters gets the message through loud and clear. Well, quiet and clear.

In this article: ASMR, Tingle Monsters, Alexandra Serio, Nameless Network, horror, movies, Short film, trolls, harassment, entertainment
All products recommended by Engadget are selected by our editorial team, independent of our parent company. Some of our stories include affiliate links. If you buy something through one of these links, we may earn an affiliate commission.