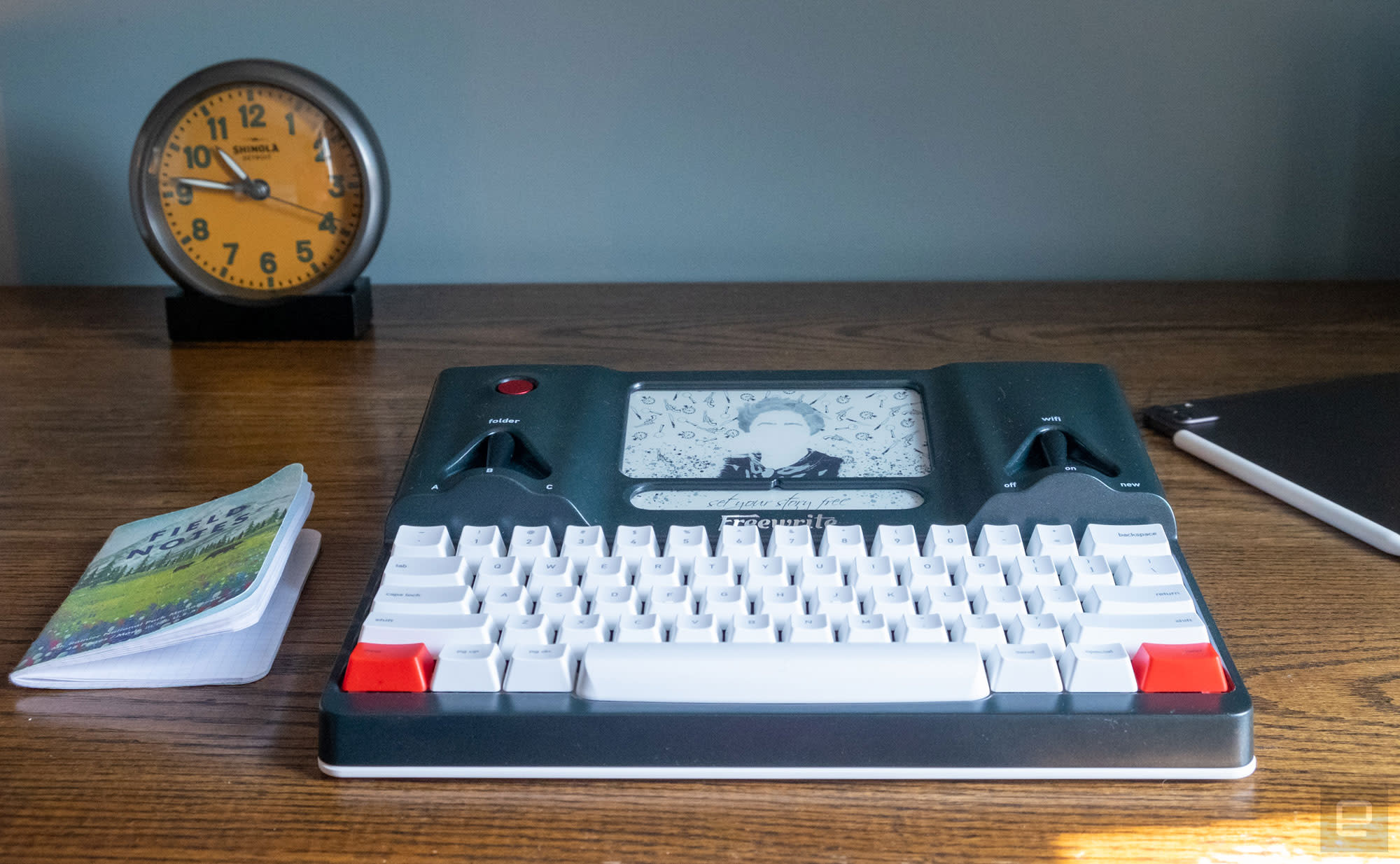 But the Freewrite's price and quirks make it impractical for most.

I’ve been a technology journalist for 10 years now and have written thousands of news articles, reviews and analysis pieces in that time. But lately I’ve wanted to change it up and do some writing that flexes different parts of my brain: things like short stories, essays or even a longer fiction piece.

But since I’m a tech nerd at heart, I couldn’t help but start thinking about new software or gadgets I could use to optimize my pursuit. I started using my favorite writing app, Bear, on the iPad Pro. I had read that minimizing distractions while writing can be crucial to making headway – and though my job means I’m almost always multitasking while writing, the luxury of my new hobby is that I can take the time to truly focus. But all those notifications and distracting apps lurk right beneath the surface, testing my resolve to actually sit down and get into the zone.

At the same time, I caught wind of a new product from a company called Astrohaus, the “Hemingwrite,” a limited-edition version of a device that Astrohaus has sold for about five years. The Freewrite (and the Hemingwrite edition, which is already sold out) combines an excellent mechanical keyboard with an E Ink display and is meant purely for drafting text. There aren’t even arrow keys, so editing anything more than a few words back is a non-starter. It has WiFi, so you can sync your drafts to Dropbox, Google Drive or Evernote, but that’s about the only concession it makes to the internet age.

My colleague Kris Naudus tried the Freewrite Traveler last year. As the name implies, it’s a portable version of the Freewrite with a clamshell, laptop-like design and a standard laptop-style keyboard. She did not love it, mostly because of the screen's refresh rate.

The Traveler held little appeal to me, but the full-size Freewrite wormed its way into my mind. It’s expensive at $600, but it’s a beautiful machine with an aesthetic that spoke to me. I imagined starting my day with a large cup of coffee and the Freewrite, banging out my thoughts for an hour every morning before starting my work day. With my phone silenced, good music on my headphones and a blank page in front of me, I’d surely get into the writing flow.

By the beginning of August, I had decided to try the Freewrite for a month and see if it was a useful tool for me. My first impression of the Freewrite hardware was that it looked just as striking in person as it does online. The main chassis is a dark gray aluminum, while the underside is a bright white soft-touch plastic that matches the white keycaps. The E Ink screen is a little under five inches wide and a bit over two and a half inches tall. There’s also a smaller thin strip of a screen below that displays things like word count, a clock, a timer or the sync status of your drafts.

Flanking that screen are two pleasantly chunky physical switches: one for controlling WiFi settings and another to move between three different folders that drafts are saved in. The last button wakes up the Freewrite when you’re ready to go. Like the two switches, this button just feels great to press. At a time when so many of our devices try to do so many things, there’s something pleasant about a beautiful piece of hardware designed to do one thing well.

Right away, I noticed the learning curve. For me, it was a combination of the mechanical keyboard and E Ink screen. Those are both two of the main selling points for the device, and they’re each very different from what I’m used to. After years of using thin laptop keyboards, the mechanical keyboard tripped me up a bit; my accuracy and speed were not the finest. Given the lack of a cursor and arrow keys, I tried to train myself to blast past small typos rather than delete words to go back and fix them.

This is just what the Freewrite’s creators intended. This isn’t a device for editing your thoughts, just for getting them out as quickly and efficiently as possible. Fine-tuning can happen later, on a laptop. It took some time to get used to this approach, and I still often find myself stopping to go back and fix small mistakes, but I can definitely appreciate the benefit of moving forward with whatever I’m writing rather than getting hung up on the details.

The screen presents its own challenges and benefits. I was originally worried about its size, but that turned out not to be an issue. You can adjust the text size, but the default setting let me see plenty of my draft. I’d occasionally have to page up a bit to refresh my memory on what I was working on, but it honestly never felt too cramped.

It’s sharp, clear and looks great with or without the light activated. I tried to train myself to write by natural light, and most of the time I found the built-in front-light (again similar to the Kindle) unnecessary. It’s still good to have you prefer working in darker conditions, but I try to do most of my work in a well-lit room.

If you’ve ever used a Kindle, you know the big downside of E Ink screens: the refresh rate. It’s not as big an issue on a Kindle, where you flip the page every 30 seconds or so, but on a typing device the screen is updating constantly. It’s far different than the instant feedback you get when typing on a traditional computer, and I can absolutely see how it would be off-putting to some people.

It’s worth taking the time to get used to, though. Most experienced typists probably don’t need to watch every single character appear; I just tried to type and get into a flow and only really pay attention to the screen when I wanted to go back and read something. In my mind, I think the trade-off between a traditional LCD screen here is worth it. We have more than enough blue-light screens in our lives.

Another benefit of the E Ink display is that it means the battery life is measured in weeks, not hours (yup, like the Kindle). I’ve been using the Freewrite pretty heavily over the last month and I think I’ve given it a full charge twice. Astrohaus says it’s rated to run for four weeks with 30 minutes of daily usage. My sessions were usually longer but less frequent; I definitely didn’t hit four weeks between charges, though. Regardless, unless you use the device for multiple hours every day, you shouldn’t have to worry about running out of juice.

Overall, I’d say the hardware delivers what Astrohaus promises. But I’m not trying to review this like an iPad or other modern gadgets. For me, the question has been whether this thing will help me become a more disciplined writer, and if it is better suited to that task than other tools at my disposal.

Trying something a little different lately. Giving the @Astrohaus #Freewrite a shot while simultaneously doing @jamiattenberg's #1000wordsofsummer challenge. It's fun to flex the creative writing brain, even though I feel everything I'm doing is aggressively mediocre! pic.twitter.com/jqXWrS0Oo9

By one very important metric, the Freewrite is a success: I’ve written over 15,000 words on it in less than a month, the vast majority of which were not for work. Aside from this story and one other, everything else I’ve created on the Freewrite has been words I would not have written if I wasn’t trying to write creatively.

Of course, that’s not to say I couldn’t have done the same thing with my iPad, a laptop, or various other gadgets. From that perspective, it’s hard to spend $600 on a Freewrite, as it doesn’t offer any truly new features compared to a laptop.

But, in the same way that a Kindle, Nintendo Switch or a high-end digital camera are better for specific purposes than a smartphone or iPad, the Freewrite is optimized for its singular purpose better than other options. Because the hardware is so gorgeous and easy to use, I found myself wanting to pull it out – it has been a positive reinforcement tool that has helped me build my habit.

That said, I still have to have the discipline to use it and block out potential distractions. If I set up with a laptop on my desk while trying to write with the Freewrite, I’m just screwing myself.

That’s why the Freewrite hasn’t been an essential tool for my work. Even on days when I need to get writing done, I’m often multitasking, keeping an eye on our Slack channel and the news in a broader sense. I realize this doesn’t make for an optimal writing environment, but it’s the reality of being an online journalist.

Practically speaking, I’m often flipping between my writing and a browser for research or another document with notes on my piece. There simply aren't a lot of stories that I work where I can just sit down and write uninterrupted. This story is one of them, though, and a workflow where I do my drafting on the Freewrite while also having my iPad handy for research, notes and an occasional Slack check has worked pretty well thus far.

There’s no way to quantify how much of this is due to the Freewrite and how much of it is simply me finding the willpower to start developing a new habit. People are creatures of habit, and I, too, enjoy a good ritual. I haven’t fully transformed my life where I can write uninterrupted every morning like I imagined, but I have found myself making more time for my new hobby. The other night, I had a few hours free after work, and instead of blowing them on video games, I worked on a story I’ve been writing – a small victory over my lowest impulses, but I still think it counts.

Lately, I find myself waking up thinking about when I can squeeze in 30 minutes or an hour of writing time without the distractions of news and work, and the Freewrite is my first choice for that. It’s a joy to type on, and it’s a prime example of hardware that just gets out of your way and lets you focus on the task at hand. There’s no doubt that it’s an expensive device, and one that is more limited than a comparably priced laptop. It’s a luxury, but for a specific type of person, it might also end up being an invaluable tool for your work. For me, it's been a great help in fostering a new hobby. It's not an essential tool, but it's something that makes me want to write more when I'm not, and something that makes me want to keep writing when I am using it.