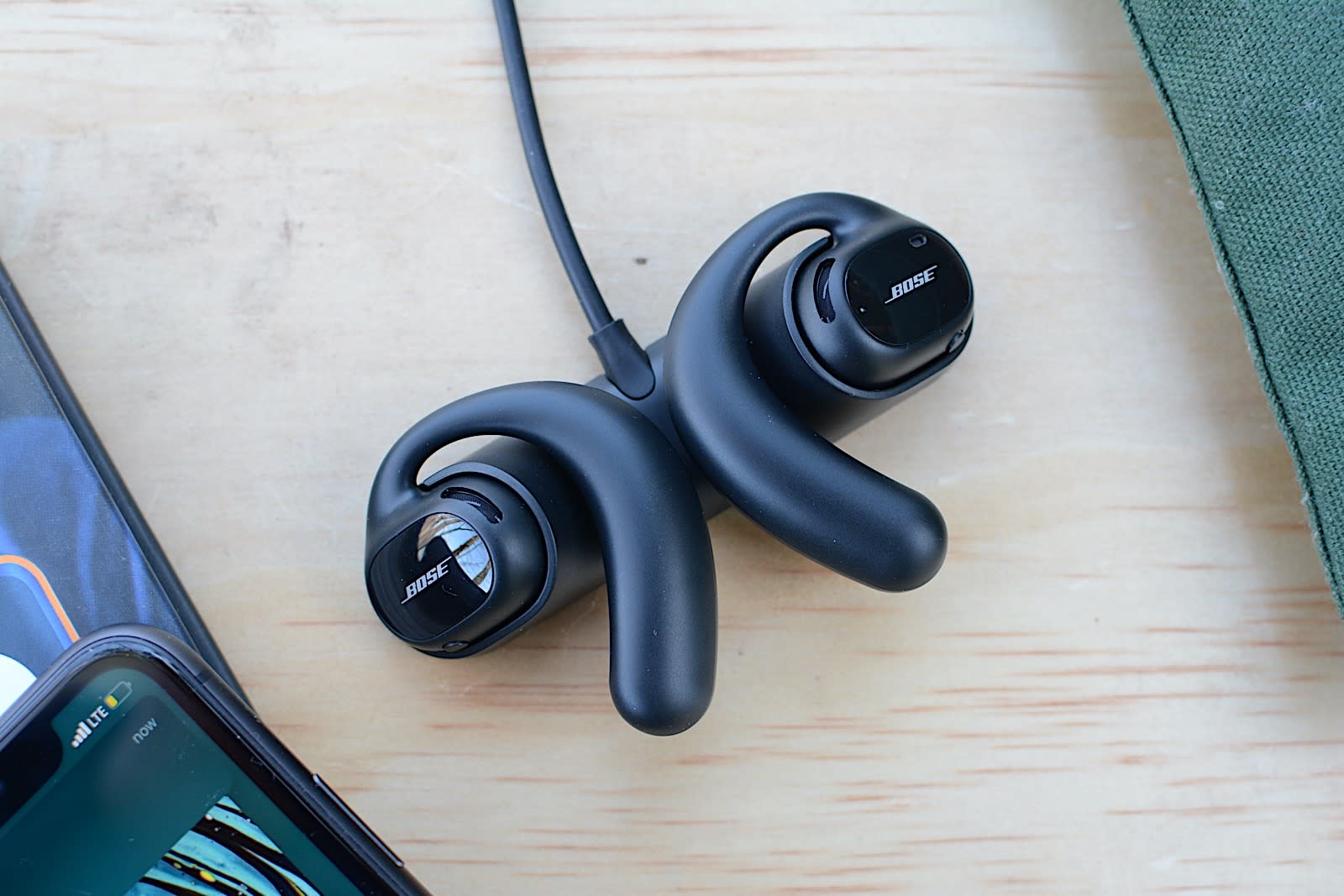 Bose Sport Open Earbuds review: Great for workouts, but not much else

The open design has its merits, but it also requires some sacrifice.

Bose is no stranger to sports earbuds. The company has made a number of them over the years, including multiple pairs of true wireless buds. However, for its most recent option, Bose is taking a different approach. The Sport Open Earbuds ($199.95) are indeed true wireless, but they don’t have the typical ear tip that goes inside your ear canal.

Instead, as the name suggests, they have an “open” design that sits outside of your ear. Not only does this increase comfort, but it also allows you to hear what’s going on around you at all times — a key safety feature for runners. Add a sporty over-the-ear hook design and water resistance and you’ve got earbuds prepped for the gym or trail. The only question is whether you’re willing to make some sacrifices for the sake of staying in tune with your surroundings. 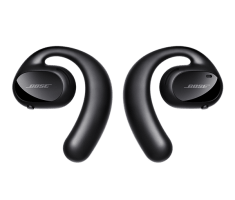 Like a lot of sports buds, both wired and wireless, the Bose Sport Open Earbuds have a hook that goes over the top of your ear and down behind it. This, of course, keeps them in place while you’re moving around on a run or in the gym. And that’s even more essential with these since there’s nothing going inside your ear that would otherwise keep them from falling out.

The hook design keeps things stationary, but they’re made of hard plastic. They don’t offer as much comfort as a soft-touch or flexible material would. Plus, they don’t bend to adjust to the contours of your ears. You’re stuck with the exact shape Bose’s designers selected, which isn’t uncomfortable per se, but it also isn’t as comfy as it could be.

Due to the Sport Open Earbuds design, the actual “earbud” component sits at the top of your ear rather than just outside of your canal. This allows for the “open” design that keeps your ears free to hear what’s going on around you while you listen to music or podcasts. Bose has created what it calls OpenAudio technology that beams “rich, full-range sound” into your ears while reducing what others nearby might pick up. It’s a similar concept to the Bose Frames, though these earbuds position the sound source much closer to your ear. So instead of using bone conduction, the Sport Open Earbuds employ specifically placed acoustic ports that channel music to its intended destination, powered by two 16mm drivers. It sounds good on paper, but in practice, my family could easily hear noise from these even at medium volumes.

Samsung’s Galaxy Buds Live, also offers an “open” type design. But with those, Samsung puts the speaker directly over your ear canal. So while there’s no ear tip inside your ear, the buds are much closer, which helps with noise isolation and overall sound quality.

Lastly, Bose didn’t totally nix on-board controls for the Sport Open Earbuds. There are two tiny physical buttons — one on each side — that offer a few options. On the right, a single press will play/pause, a double press will skip to the next track and a triple press will return to the previous track. That same button is used to power on the earbuds and answer/end calls. The control on the left earbud activates your voice assistant of choice when you hold it down, and you can set it to announce the battery level with a single press. Thanks to a post-launch update, you can adjust volume with a tap on the outside of the earbuds. Use the right to increase volume and the left to turn it down. Bose also gives you the ability to disable volume control entirely inside of its app (it’s disabled by default).

It’s interesting that Bose employs both a physical button and touch gestures for the on-board controls on these earbuds. The tap is the less invasive action, so it would be great if the company could make some of button-pressing items touch enabled. At any rate, it’s clear Bose plans to improve the experience over time, since it’s already doing so shortly after launching the product.

Going into this review, I had flashbacks to testing the Galaxy Buds Live. Samsung’s design choices were pretty unique and those earbuds accomplished a lot of what it set out to do. However, the audio quality just wasn’t there. Plus, the company included active noise cancellation (ANC) on a product that didn’t seal off your ears, which kind of defeated the purpose. My first experience with a set of “open” design earbuds showed me having your ears always tuned into what’s going on around you meant big sacrifices in audio quality.

That’s the case again with the Bose Sport Open Earbuds. Bose has achieved a lot of what it intended: primarily, keeping your ears unobstructed when you’re exercising. There’s no denying this has massive implications for safety, especially for runners. But, I could overhear plenty at home while testing these. And, if your gym is anything like the one I went to pre-pandemic, it blasts a variety of pop music at an unreasonable volume. The main reason I wore headphones was to block that out, and these Bose earbuds won’t help you much there. You also have to be aware that these aren’t going to give you the audio quality you’ll likely be looking for in a set of $200 earbuds. That’s especially true when it comes to low-end.

While the Sport Open Earbuds have decent clarity, the lack of bassy thump sucks a lot of energy out of songs that are otherwise big and boomy. And if you’re like me, you rely on an ample amount of low-end to keep you motivated during a workout. With these earbuds, you get plenty of treble and some mid-range but that’s about it. This means they’re great for podcasts but just okay for most genres of music.

For example, the drum machines and percussion on Com Truise’s synth-heavy instrumentals retain detail, but the songs just don’t have the depth and droning bass lines that make them so atmospheric. The discrepancy is even more noticeable with hip-hop tracks like Lil Baby’s “Heatin Up.” The beat that’s the backbone of the track fades into the background.

The open design also has a benefit for calls: you can chat without feeling like you have to yell to hear yourself. Like podcasts, call audio comes through the earbuds crisp and clear. However, the person on the other side noted I sounded only slightly better than a speakerphone and background noise was an issue. They also said that they could hear themselves coming through — likely because the earbud mics were picking up sound from the open speakers.

A lot of headphone companies offer the ability to use audio presets, manually tweak the EQ or customize on-board controls with an app. That’s not an option Bose gives you with the Sport Open Earbuds. Instead, the app primarily handles software updates and monitors battery levels. There is one handy item in relation to charging: the app knows when the earbuds are on the base and displays progress.

Like most earbud and headphone apps, it also reminds you what the controls do, but that’s really it. It’s clear Bose wanted to keep things simple here, but that comes at the expense of literally any degree of customization.

Bose claims up to eight hours of battery life on the Sport Open Earbuds. During my tests, I actually managed slightly better, stretching them about 30 minutes longer than the stated figure. This listening time is slightly above average for true wireless earbuds these days, but there’s a catch: these buds don’t come with a charging case. You don’t have a place to constantly top off the battery in your pocket when you’re taking a break from tunes. It also means there are separate accessories for charging and for storage.

Bose includes a magnetic charging base with a USB cable that connects to either your computer or a plug you likely already have. The Sport Open Earbuds fully charge in two hours, and 30 minutes will give you three hours of playback. Lights on the outside of the earbuds pulse white during charging and remain solid when done. The company also put a hard shell carrying case in the box. It’s not the fanciest thing, but it gets the job done. And a magnetic closure should keep them from falling out if the case gets jostled around in your bag.

Bose actually offers some solid competition for the Sport Open Earbuds within its own product lines. The Bose Sport Earbuds are a more traditional true wireless product, with ear tips and fit wings to keep things in place and block out noise. They lack the company’s powerful ANC and they’re quite big, but the sound quality is solid and they’re cheaper at $179.95.

As I mentioned, if you’re a fan of the “open” wear style, Bose also offers it with sunglasses. The Bose Frames Tempo are specially designed for exercise and sports, though the company does have options for “regular” use. The sport model offers eight hours of battery life and better water resistance, but they’re also one of the priciest options at $249.95 (some models are $50 cheaper). All of the audio sunglasses have swappable lenses, some are even prescription friendly, and they keep your ears tuned in to what’s going on around you.

For non-Bose alternatives, I’d actually suggest the Galaxy Buds Live from Samsung. Like the Sport Open Earbuds, these don’t have an ear tip and sit outside of your ear canal. However, they’re positioned just at the outside of the opening, rather than above it. This ensures better sound quality while still keeping things comfy and allowing ambient noise through. I’m not a big fan of them overall, but if a set of “open” earbuds are what you’re after, they’re worth a look. As of this writing, they’re $130 on Amazon (regularly $170).

Bose has a long history of great-sounding headphones. The company may be mostly known for its noise-cancelling chops, but overall audio quality has also been respectable. With the Sport Open Earbuds, Bose decided allowing you to be hyper aware of everything around you was paramount. This means you gain the comfort of not having something crammed in your ears, but you have to accept sacrifices to sound quality.

I can appreciate these earbuds have a very specific purpose, and they could be a solid compliment to a set of over-ear noise-cancelling headphones that allow you to tune in and tune out the world. Of course, that’s the wrinkle: Do you want to invest in two sets of headphones or earbuds? There are plenty of all-around options that are well-suited for both casual listening and exercise. You’ll just have to decide if keeping your ears open is more important than great sound quality.