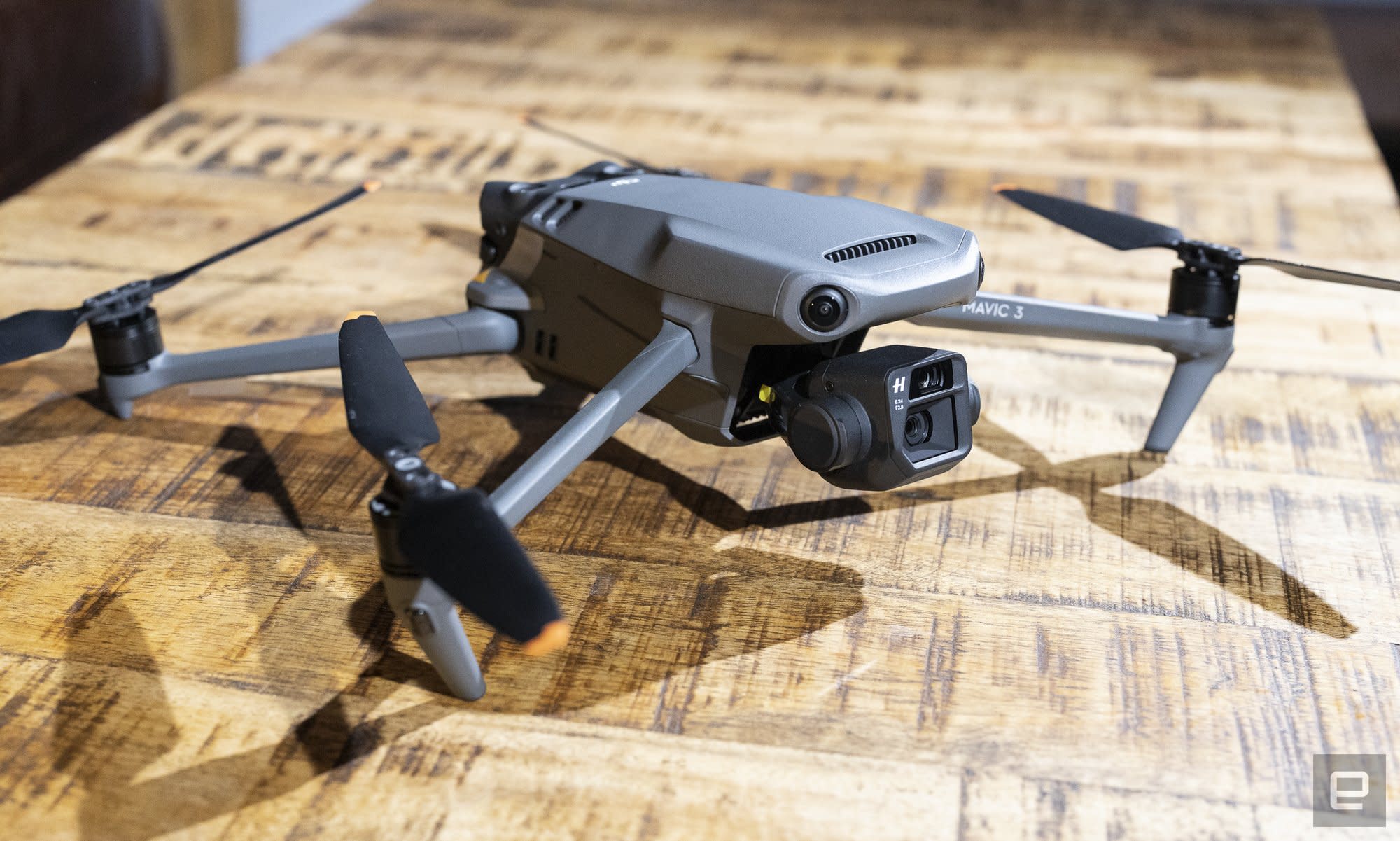 It can also fly for up to 46 minutes, 50 percent longer than before.

DJI is best known for drones, but it's possibly the most inventive camera company right now. After unveiling the outrageous full-frame Ronin 4K camera/gimbal last month, it has now launched the $2,200 Mavic 3 drone with not just one, but two innovative camera systems.

As rumored, there are two models in the Mavic 3 family, the Standard and Cine models, along with a "Fly More" combo that bundles more accessories. The main difference is that the Mavic 3 Cine has a built-in 1TB SSD and supports Apple ProRes 422 HQ video recording — highly desirable for professional film productions. The latter is also considerably more expensive, as I'll discuss shortly.

The Mavic 3's main 24mm (35mm-equivalent) f/2.8 - f/11 Hasselblad-branded camera has a Four Thirds sensor that's considerably larger than the 1-inch sensor on the current Air 2S model. And yet, the camera module doesn't look much bigger and the Mavic 3 weighs slightly less than the Mavic 2 (895g compared to 907g).

Four Thirds is the same size as the Micro Four Thirds sensor on Panasonic's BGH1 box camera, for example, so it should allow for more cinematic video and photos. The variable aperture, along with optional ND filters, will make it easier to shoot in a variety of lighting conditions. It also comes with a new autofocus system called Vision Detection that supposedly optimizes focusing speeds.

If you need to get in much, much closer, DJI has squeezed in a second camera directly above the main camera. This one has a half-inch 12-megapixel sensor and 162mm tele lens (35mm equivalent), which is around a 4X zoom, or claimed 28X hybrid zoom. The aperture is fixed at f/4.4, and it offers strictly automatic, rather than manual exposure control. It can capture 4K video at up to 30 fps.

DJI has confirmed that the Mavic 3 will have up to 46 minutes of autonomy in ideal conditions (40 minutes of hover), as leaks had suggested. That's up pretty massively from the Mavic 2 Pro or Air 2S, both of which offer 31 minutes of flying time. It can also fly a bit faster too, at 47 MPH compared to 45 MPH. Those capabilities were enabled by a higher-capacity battery, more energy-efficient motors/propellers and a more streamlined shape on the Mavic 3's arms, body and gimbal. "Wind tunnel testing shows Mavic 3 produces 35 percent less drag than previous generations," DJI wrote.

The Mavic 3 also offers enhanced flight safety thanks to its updated APAS 5.0 system that uses inputs from six fish-eye vision sensor and two wide-angle sensors to detect and avoid obstacles. Meanwhile, the ActiveTrack 5.0 system has new options for tracking subjects no matter which way they're moving, and it can even continue to track a subject if it moves out of frame and pick it back up when it reappears. All of that allows "more fluid and diverse drone and camera movement," DJI said.

It also comes with an improved RTH (Return to Home) system that works by automatically calculating the shortest, safest and most energy-efficient route to land back at its home point. It can take into account wind speed and power when calculating the path, giving users a bit more flying time before triggering the RTH action. Another updated feature is O3+ signal loss prevention that allows for a maximum control range of 15 km. Mavic 3 is also DJI's first drone with a 1080p 60fps transmission speed on the live feed, meaning "the camera view is displayed at a resolution close to what the camera actually records," DJI notes.

Along with the drone, DJI introduced a number of new accessories, including a new DJI RC Pro smart controller, a 65W Portable Charger that's compatible with notebooks and smartphones and allows for fast charging (around 96 minutes), a wide-angle lens and two sets of ND filters (ND4/8/16/32 and ND64/128/256/512) that allow for shooting in bright sunlight. It also introduced a carrying bag that converts into a backpack that can fit the drone, a laptop and other accessories.

Engadget received the drone just yesterday, so we haven't had a chance to fly it yet — stay tuned for a full review. However, I'm impressed so far by the design and small details like the storage cover that protects the camera, gimbals and propeller (below). It's also clear that DJI has put a lot of thought into the new charging system and batteries that should make operation more practical. Even the carrying bag/backpack is well conceived, with pockets and sleeves for the batteries, ND filters and more.

As you may have noticed, the drawback with the Mavic 3 is the relatively high price. Rather than $1,600 as was rumored, the Mavic 3 starts at $2,200 for the Standard model, which includes the Mavic 3 drone, storage cover, one battery and charger, the RC-N1 remote control "and other essential items." The $3,000 Mavic 3 Fly More Combo adds two extra batteries (three total), a three-battery charging hub, the ND4/8/16/32 filter set and the fancy bag/backpack.

Finally, the $5,000 Mavic 3 Cine Premium Combo gives you all that plus the aforementioned 1TB SSD and Apple ProRes 422 HQ recording (arriving in January 2022). It adds a few more accessories to the Fly More Combo as well, including the RC Pro remote, ND64/128/256/512 filters and the DJI 10Gbps data cable. Five grand is obviously lot of money, but the Cine model is aimed more at professional film producers. All three drones are now available to order from DJI's website, Amazon and other authorized partners.