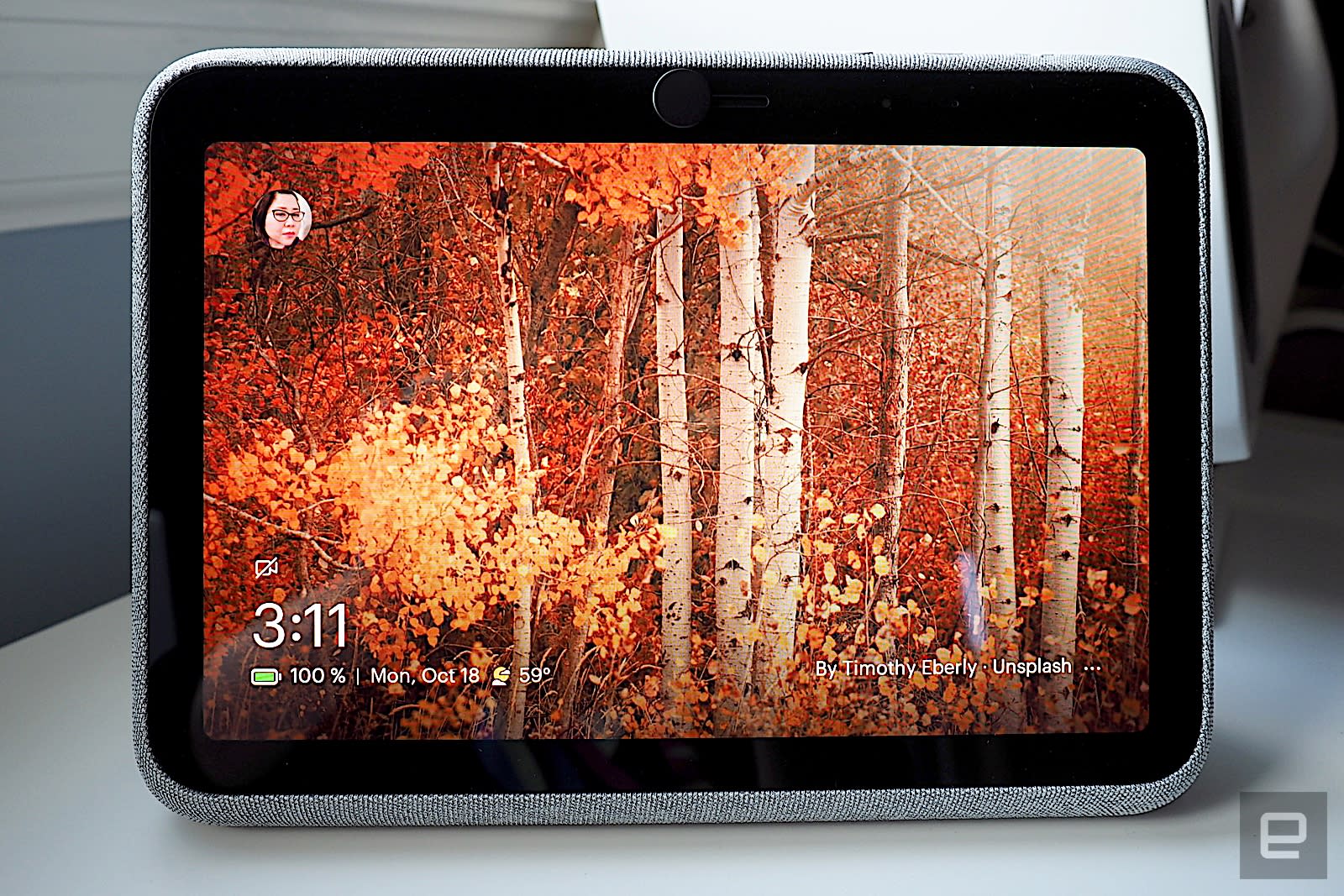 Portability doesn't quite make up for its flaws.

The main selling point of Facebook’s line of Portal devices has always been its video chat capabilities. Plus, it’s the only smart display that works with Messenger and Whatsapp, two of the most popular chat platforms in the world (with added support for platforms like Zoom last year). This year, Facebook is introducing a portable version called the Portal Go, that you can drag around the house to make calls from any room.

That portability combined with a few software updates make the $199 Portal Go an improvement over its predecessor, but it still doesn’t have the same breadth of features as Google’s or Amazon’s smart displays. And, as with all things Facebook, it all comes down to whether you trust the company with your data in the first place.

The Portal Go has a softer aesthetic than previous models, with a grey fabric enclosure that’s similar to Google’s Nest Hub. It has rounded corners and almost looks like the display has been stitched onto a pillow (albeit a not very plush one). All of these curves make the Go pleasant to hold or to prop up on your lap, which is important for a device that’s meant to be portable.

Along the top of the Go are the volume controls and a button that disables both the camera and the microphone; The status light will turn red when that happens. If you want to leave the microphone on but not the camera, you can slide a built-in cover over the lens. This way, you can still use voice commands and make calls without worrying that anyone is watching you.

On the front is a 10.1-inch display with the same 1,280 x 800 resolution as previous Portals, but that’s not a bad thing. It’s crisp, colorful and the viewing angles are great. It has the same adaptive lighting features too: Automatic screen brightness, color adjustment and a Night Mode that reduces the amount of blue light in the evening.

The main difference between the Portal Go and its predecessors is that it doesn’t need to be plugged in all the time. Thanks to its integrated handle and light weight, it’s easy to tote around with one hand. When it’s time to charge it, the device fits neatly into a proprietary 3-pin charging dock, too.

According to Facebook, the Portal Go will get up to five hours of Messenger calling on a charge, and up to 14 hours of music playback if the screen is off. But I actually managed to get six hours and five minutes of calling out of it before having to stick it back on the charging dock.

One of the benefits of the Go’s portability is that it is now effectively a portable speaker as well. The audio quality is pretty decent too, thanks to its two full-range speakers and subwoofer. The bass was relatively deep considering its size and the highs were clear. It’s not as good as the audio from my Sonos One of course, but it’ll do in a pinch.

It should go without saying that, like all Portal devices, the Go requires a Facebook account. (How else is it supposed to make Messenger calls?) You can choose to integrate your WhatsApp or Workplace account as well.

Basically, the Go is a smart display that’s meant to be as easy to tote around as a tablet. You can keep it docked in your office for most of the day, for example, but when it comes time to chat with grandma, you can carry it to whichever room the kids are in. I don’t have any kids, but I liked being able to set it up wherever the best lighting was at various times of day for calls.

The Go has a 12-megapixel wide-angle lens coupled with AI-powered tech that will automatically pan and zoom to keep you in frame. Instead of crowding over an iPad, for example, you could just place the Go on a coffee table and get the whole family on the call. You can also double tap on someone’s face to “Spotlight” and keep the focus on them. I was impressed with how well it was able to “follow” me around the room, keeping me in frame as I wandered from my desk to my couch.

This automatic panning and zooming doesn’t just work in Messenger and WhatsApp, but also third-party video applications like Zoom and GoToMeeting. I should say, however, that this face-tracking technology also exists in the Nest Hub Max and the Echo Show 8, and they too have Zoom integration. However, only the Portals have Messenger and WhatsApp.

I was quite pleased with the video quality overall. I did notice occasional latency issues, but it wasn’t that bad. The Portal Go was able to handle different lighting conditions too; The colors were great even in relatively dim lighting. I did notice that calls in WhatsApp were a bit more pixelated than Messenger, but according to Facebook, that could be a bandwidth issue as they’re separate networks.

Facebook has also updated the Watch Together experience so it can be used not just on Portal-to-Portal calls, but also with Messenger contacts on other devices. It was a blast laughing over videos like 5-minute Crafts on calls with my friends. My main criticism is that we could only Watch Together clips that are on Facebook Watch. Portal devices unfortunately lack support for YouTube, which is a much more diverse source of video content.

Like previous Portals, the Go has AR features such as StoryTime, which is an AR storytelling experience, and PlayTime, which is an assortment of AR games. These are fun, but they’re the sort of thing you try once and never again.

The whole Portal family got an update recently with a new, more personalized home screen. There’s a top row of favorite contacts that you can customize, and you’ll also see call notifications here.

Underneath the favorite contacts is an array of cards that lead to different apps, depending on what you have installed. I found the calendar card particularly useful, which not only shows upcoming events with handy links to join Zoom chats where relevant.

The Portal Go can be used by the whole family, but you might not trust everyone to use the device responsibly. That’s why Facebook introduced Household Mode, which restricts what users can do while it is enabled. For example, you can set it so that the Portal can only be used for Messenger calls to grandma and grandpa. You can then disable Household Mode to regain full control of the device.

By default, the Portal Go’s home screen will show stock art, but you can also customize it with a Digital Photo Frame app. When you tap the Apps button on the home screen, you’ll see an array of pre-installed apps like Spotify, Pandora, iHeartRadio, Photo Booth, a browser, Facebook Live and Facebook Watch, and more are available for download.

As with previous Portals, the Go supports Alexa and the Facebook Assistant, which you summon by saying “Hey, Portal”. You can ask the Facebook Assistant to make Messenger and WhatsApp calls, play music, check the weather, create timers and launch apps. I also occasionally used it to change the voice options for different AR effects.

Alexa, on the other hand, is more for hearing the latest news or sports scores, building a shopping list and managing your smart home devices, which the Portal assistant can’t do.

Of course, with any Facebook product, privacy and security are obvious concerns, given the company’s terrible reputation. It said the AI-powered panning and zooming are processed locally on the device. Additionally, all WhatsApp calls are end-to-end encrypted by default. Messenger calls however, are not, and you’ll have to specify which contacts or groups you want to enable it with. Even then, encryption is still in the roll-out phase; I don’t currently have it.

While the Portal Go excels at video calls, it still lags behind the Amazon Echo Show 8 and the Google Nest Hub Max in basically every other department. Facebook doesn’t offer any streaming video options aside from its own, which means no Hulu, Netflix or YouTube. Plus, smart home features are buried in the Portal Go, while they’re front and center on the other devices.

To make matters worse, the Nest Hub Max and the Echo Show 8 have similar smart camera technology to the Portal Go, so that’s not a unique advantage for Facebook. And the $199 Go is even more expensive than the $130 Echo Show 8. (Though the Nest Hub Max is $229.) The Portal Go is the only one that’s battery-powered, however, while the other smart displays are stuck wherever you plug them in.

The primary advantages that the Go has over other smart displays is its portability and Messenger and WhatsApp support. But both Google and Amazon make better devices with way more features. On top of that, Facebook’s poor reputation on privacy gives us pause on recommending it. You should only choose the Portal Go if Messenger and WhatsApp are the two video call services you use.

All products recommended by Engadget are selected by our editorial team, independent of our parent company. Some of our stories include affiliate links. If you buy something through one of these links, we may earn an affiliate commission. All prices are correct at the time of publishing.
View All Comments
Facebook Portal Go review: Blurring the line between tablet and smart display