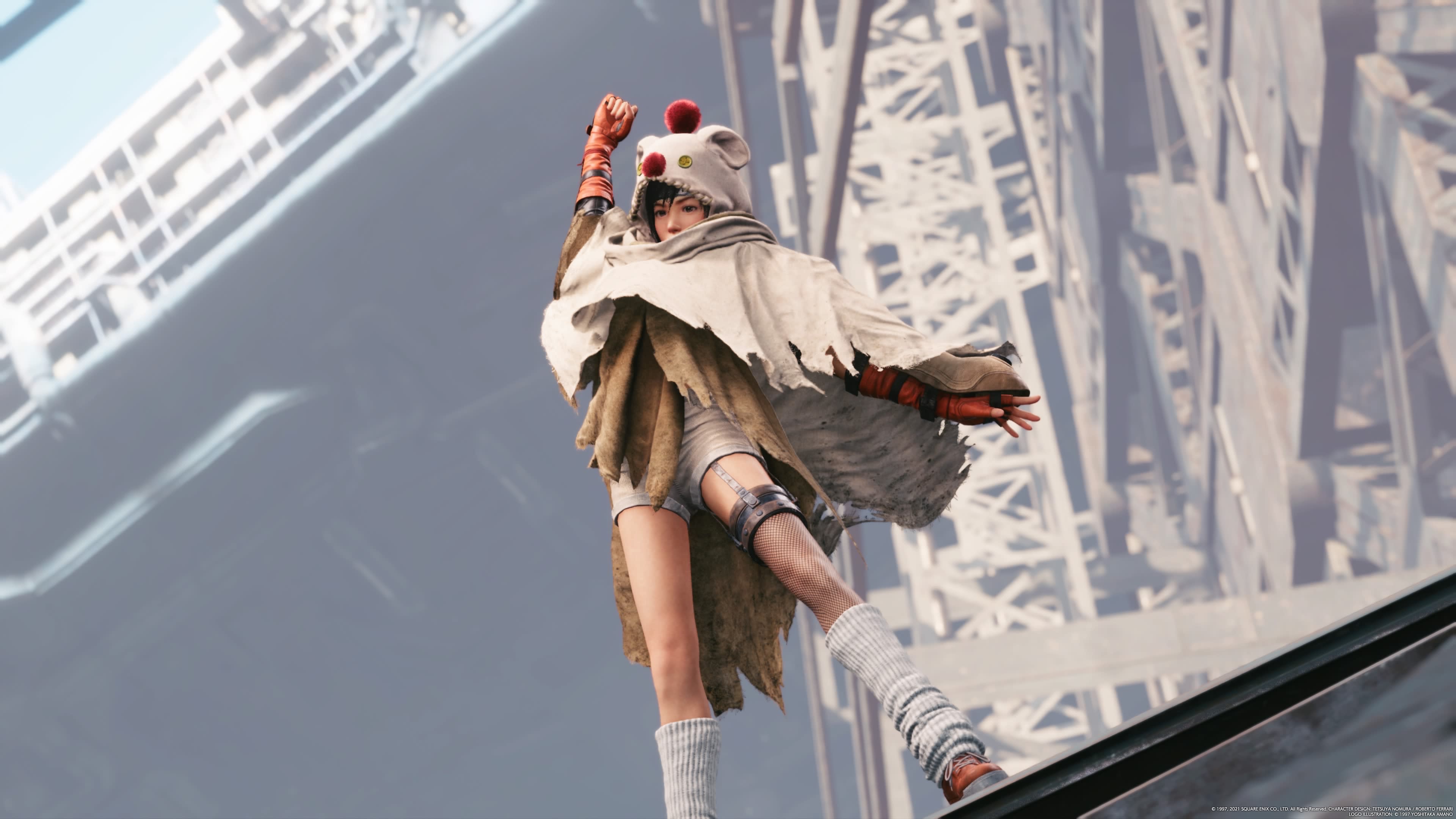 It’s an otherwise solid upgrade that lightly taps into the possibilities of newer consoles.

Final Fantasy 7 Remake Intergrade is a little confusing, if the name didn’t give it away. It’s Final Fantasy 7 Remake, remade (or at least polished up) for the PlayStation 5. It also includes new original content called “Intermission.” This is a two-chapter run completely separate to the main game, following the once-optional character Yuffie arriving into Remake’s main setting, Midgar, and bringing her own fight to the evil Shinra corporation. Sadly, you can only play Intermission with a PS5.

In Remake, each character had a unique playstyle in battle, and that’s still true in Intermission. Yuffie’s battle style switches between long- and close-range fighting. She’ll hurl her oversized shuriken at enemies, and then either close the distance for melee attacks, or launch magical elemental attacks from afar, with the shuriken acting as a sort of lightning rod.

As a young, out-of-town ninja, Yuffie also brings a healthy dose of sass and attitude to a game (and characters) that can take everything a little too seriously. The results are often hilarious. When you take on secondary characters from Remake in Fort Condor mini-games, she’ll talk smack to the likes of Jessie, Roach and Kyrie. At points, it’s borderline tone-deaf: Jessie may have just sent her friends, part of anti-Shinra group Avalanche, to their deaths. But from the perspective of Yuffie, she doesn’t know that, and when she crushes the anxious Avalanche member in a board game, the ninja doesn’t hold back.

Soon into the first chapter, Yuffie is joined by a new character, Sonon. He acts as a close-range tank, distracting enemies from Yuffie who’s more easily damaged. While he’s an uncontrollable support character, and will choose his own movement and enemies to attack, you can still order him to attack with skills or equipped magic from the battle menu.

This leaves Yuffie able to deal damage safely from a distance; she has the ability to mete out elemental attacks without having to equip the necessary materia (orbs that add magic and skills to characters), able to attack weak points without tinkering much with your loadout. You can also bolster Sonan with materia, making him a more tempting lure to enemies, or just amping up his hit points to ensure he survives more often than not. Sonon also has a convenient resurrection skill that triggers if Yuffie gets KOed, ensuring you’ll center your fight strategies around letting Sonon draw the enemy’s attacks, while Yuffie attacks weaknesses and shoots across the area for enemy crowd control.

I’m impressed Square Enix was able to eke out yet another completely different fighting style for this DLC chapter — and this bodes well for the subsequent four characters that were party members in the PSOne’s Final Fantasy 7. In the original, barring stats and limit break attacks, characters were blank slates which you loaded out with materia to offer more attack options. In the Remake, they move and attack almost completely differently, demanding different playstyles when you switch.

There’s a PS5 version of Remake, too. Given that FF7R was a recent exclusive to the PS4, the changes aren’t groundbreaking but they’re certainly noticeable. I took issue with the grainy land and skyscapes you’d see from the detailed areas in FF7R, and in Intergrade, the resolution has been increased and detail improved. Things that the internet went to town on, like those atrociously rendered doors, have been fixed.

In Intergrade, you can now switch between performance (60fps fixed) and graphics (4K, more graphical flourishes) modes. The former is a revelation during your battles across both the game and the Intermission chapters, as your team fluidly moves around enemies. It feels easier on the eyes and just more satisfying to play. The original Remake (I hate having to write that) didn’t choke too often, but sometimes all the pyrotechnics and detailed boss battles did take its toll on framerates on the fourth-generation PlayStation. There's also a new photo mode in Intergrade, making it easier to captures some beautiful stills from what is a gorgeous game. I've added my favorite shots at the bottom.

There are some other PS5 upgrades, too. Yes, the DualSense’ haptic feedback occasionally kicks in but you’ll rarely notice it. I was only reminded of the difference during the motorcycle chase during the base game, where you can literally feel the texture of parts of your tarmac. Besides that and Cloud’s occasional memory flashes, no other times really stood out where the controller was offering me any extra immersive rumbles. As you might also expect, the loading speeds are also hugely improved: loading your saved game, or hopping between chapters are both incredibly swift.

One of the big criticisms leveled at Intermission is that these new chapters are playable only on the PlayStation 5 — if you’ve been able to buy one. But do the environments, battles and rambunctious ninjas demand next-gen console hardware?

Only Square Enix knows for certain, but I don’t think so. The PS4 would have struggled to keep up with Yuffie’s battle style, which sees her shooting across the battlefield after her oversized shuriken. There are other parts, as you navigate levels, that seem to be there expressly to showcase how smoothly the PS5 can handle a ninja hurtling down a mechanized fire pole, with scaffolding, levels and items shooting past — all backed by a five-track jazz arrangement. I'm not joking.

Right at the start of the Intermission chapters, Yuffie gingerly steps through a gap — one of the in-game slow-downs familiar to anyone that’s played Remake on the PS4. This seems to happen only once in the new parts of Midgar introduced in Intermission. It’s almost a knowing nod that things are going to speed up. And they do: the second chapter takes a few darker turns, and at times turns into a gauntlet of punishing battles that are both challenging and entertaining. Complete the Intermission chapters, and a secret optional battle in the core game, too. I won’t spoil it for you.

For those that haven’t played FF7R yet, Intergrade is the definitive version, and the DLC is worth a playthrough, but it’s a shame that the Intermission chapters aren’t playable on the PS4. It turns what is a very polished piece of DLC into a slightly hollow cash grab.

All products recommended by Engadget are selected by our editorial team, independent of our parent company. Some of our stories include affiliate links. If you buy something through one of these links, we may earn an affiliate commission. All prices are correct at the time of publishing.
View All Comments
Final Fantasy VII Intergrade’s entertaining DLC should also be on PS4