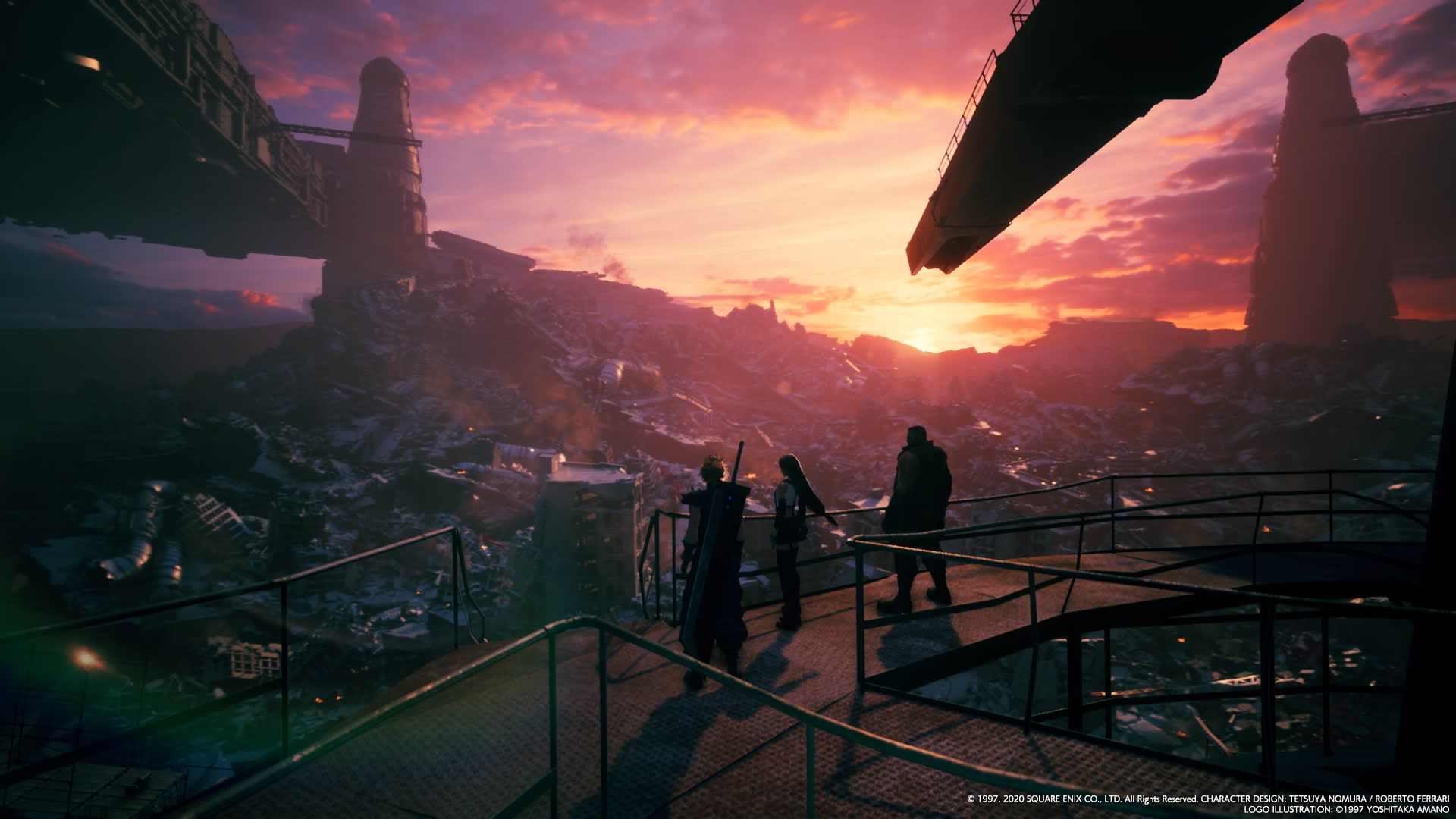 A very different, but great, game.

Decades in the making, Square Enix’s refreshed vision of Final Fantasy VII is here. If you’ve followed the announcement, the first impressions, demos and countless documentary videos from the team behind it, you’ll know it’s a big deal for the company, for the Final Fantasy series and for people obsessed with the game — like me.

The good news is that Final Fantasy VII Remake delivers. Even if I didn’t think it would.

There was so much goodwill to lose. Would they ruin the memories we had of the original? With this episodic delivery of the remake, it felt like a new way to take fans’ money. Even after I’d played the demo and previewed early parts of the game, I wasn’t sure whether Remake could deliver that FFVII experience: I knew it would only encompass the opening few acts of the original, that you wouldn’t go beyond Midgar, a huge steampunk metropolis that never lets you forget how big it is. It was going to retread the same story, the same characters, but rendered at a level unimaginable when the game was first released in 1997.

The differences are still big. You might still be controlling Cloud, the mercenary with a mysterious past and a rather consistent migraine, but this is no beat-for-beat remaster of the original. There are no more turn-based battles; they’re replaced with a system that pulls strands from Final Fantasy XV and Kingdom Hearts, and fuses them with FF7 moves and quirks. The storyline is different in parts (especially the final acts) but generally keeps the soul of the original.

Characters are more well-rounded than the original. Barret, leader of rebel group Avalanche and with a gun for an arm, is still rather cliched and shouts a bit too much. Aerith, mysterious flower girl, is a bit too consistently chipper, but her character gets some of the funniest lines, too — typically at the expense of angsty Cloud. Red XIII, a giant feline character that joins your party late into the remake, also has some zingers, but we’ll have to wait for part two to hear more from him — and actually use him. In this first installment, he’s just a guest party member.

The original FF7 had cinematic ambitions before it was even really all that possible back in 1997. The game tried to wield camera angle transitions between computer-generated backgrounds and added dramatic tension through the incredible soundtrack — or lack thereof. A couple of decades since, and it sounds so quaint. Remake has all the technical power needed to realize Midgar in incredible detail — well, the parts you can actually visit.

In battles, you will usually control Cloud at the start, but you can set it so you start things off with whoever else is in your party. From there, you only steer one person at a time during the fight, with the ability to command special attacks and spells from the other support characters. Pressing up on the d-pad will switch between characters and you’ll quickly realize that, when it comes to fights, each character is far more unique compared to their turn-based RPG origins.

Simply put, Cloud hits hard and has a counter move built-in; Barret is a ranged attacker with high defense (though he does pick up close-range weapons later); Tifa moves fast, stacking her skills and buffs to help stagger your enemies and Aerith shoots magical ranged attacks, heals with her limit-break move and has some area-of-effect tricks. She also has a knack for being KO-ed early into the game — an important reminder that you need to play differently with each of them.

The best way to approach the most difficult fights, including practically all boss battles, involves well-timed character swapping, making the most of their strengths and covering for any weaknesses.

Left to their own devices, the rest of your party will mostly act as damage sponges, contributing a few attacks on their own. It’s a shame they aren’t a little smarter. There are flashes of some better automation: There’s an auto-cure materia that’s new in the remake, which ensures an uncontrolled party member heals anyone in dire straits.

They will, however, need to charge up enough of the ATB (active time battle) gauge to do that. The ATB gauge, taken from the original FF7, behaves completely differently here, building up from attacking and defending, and you’ll need it for doing anything that isn’t a simple physical attack. I found it limited in the demo, but as the layers of complexity built up in the full game (and I came to terms with the fact that this is a very different system to the original FF7), I actually started to enjoy the combat. A lot. Building up the stagger gauge on enemies to stun them and increase damage is hugely satisfying (a battle technique seen in both FF13 and 15), while Cloud’s punisher mode, with its counterattack stance, is hugely gratifying when he turns the tables on heavy-hitting enemies.

Yes, it’s a very different system, and the FF7 Remake team has attempted to appease original traditionalists with a ‘classic’ battle mode that sadly neuters the enemies to easy difficultly (you hit harder, they hit lighter) and does half of the fighting for you. You can then just select the abilities as your ATB gauge builds — it’s a pretty soulless way to play a game that has some fantastic battle set pieces, whether giant monsters or FF7 antagonists, like the Turks, which turn up several times in this first installment.

The boss fights are the most exciting part, especially those against other human fighters, where you’d have to figure out the weakness or timing to best them. Spamming attacks isn’t going to work in FF7R. One issue I had with several boss fights were that many took too long to kill, merely to extend the game time. The majority of the monsters and robot boss fights include at least one transition to a more powerful mode — some had four of these transitions. Often, they started to drag. If you go into certain battles without the appropriate elemental attack, for example, it’ll be an uphill battle.

To equip yourself for these frenzied (occasionally lengthy) fights, materia, the orbs that provide spell and skill support, combine with a new weapons system where your equipment can be upgraded as you level up and get stronger.

Upgrades not only increase damage or hit points (health) but also add extra materia slots so you can wield more spells and add more flexibility to your fighting style. This means if you’re a big fan of Cloud’s original, comically huge buster sword, you can pretty much use it for the entire game, upgrading it with ‘skill points’ you pick up along the way. It’s nice to keep using your favorite, as you’ll be able to see most of the party’s weapons as they interact with people and each other outside of the fights.

This first installment covers the opening acts of the original, centered on Midgar. If anything, the neon city (and undercity) shines just as much as the reimagined characters. It’s all moody lighting effects, elaborate slums and highly polished corporate buildings.

Even on my base PS4, the game is nearly always gorgeous. That said — and you might notice on video — there was some corner-cutting when it comes to some textures and items, some that were hard to ignore. Aerith’s flowers, beautifully rendered in the opening beats of the game, drop down to PlayStation 2 levels of detail later in the game — and I’m not sure why. These missteps often scream out because the game is one of the prettiest titles ever for the increasingly mature PlayStation 4.

Square Enix’s clever use of high-resolution backdrops and skylines keep the steampunk city consistently in view. Later in the game, when you roam higher parts of the city, the effect is reversed, and you get a view of all the slums and all the havoc wrought by the Shinra Corporation.

Shinra is the initial antagonist in this game, just like the original, but it’s not long until Sephiroth, iconic big bad with a katana to match, starts messing with Cloud’s mind and picking a fight with your team. It wouldn’t be a FF7 game without Sephiroth, and the team behind Remake seem tacitly aware of it. Brief mentions or appearances of the silver-haired villain in the PlayStation original have been hugely expanded here, especially when FF7R attempts to step out from the shadow of the source material.

New for Remake, mysterious phantoms appear at several key points in the game, blocking paths, attacking the party and creating more questions about what’s going on in the remake. There seems to be a connection to Sephiroth, but well… what do I know? I know that new story twists and turns kept me — someone that completed the original countless times — intrigued to see what happened next.

The other members of the rebel group Avalanche, Jessie, Biggs and Wedge, are given more space and time to express why they’re fighting Shinra in the first place. This new detail expands to many once one-note characters, that obsessive Final Fantasy 7 fans like me can recognize, like Scotch and Kotch, the two lackeys for creep kingpin Don Corneo, or Big Bro, now called Jules, the guy that runs the squat competition. Even Jonny, an otherwise unremarkable character with an unrequited love for Tifa, gets his own sidequest.

This level of affection extends to who and what you fight, with many standard enemies from the original amped up to full-blown boss status in the remake. Delightfully, they’re some of the most ridiculous enemies. Fight a house! Or a man trapped in a pot. FF7R is still, thankfully, bizarre at times.

There’s a new chin-up challenge to go alongside the squat competition, a box-smashing competition and Cloud still gets a feminine makeover that could get him into Ru Paul’s Drag Race. I’m relieved the game has kept its weirdness.

The remake includes many set pieces, like briefly taking control of Barret to explore (and shoot walls to pieces) or using grappling hooks to scale the heights of Midgar, which would never have happened in the original. Like the original, though, the game has some flaws. It’s rather linear, and exploration opens up (a little) late into the game. You’re always heading from one goal to another, with little agency.

That said, it’s one incredibly polished adventure, a game with an awful amount of ambition, even if it’s not the entire story. It was never going to be something as epoch-defining as the original Final Fantasy VII, but now I’m intrigued.

How will the creative team layout the rest of the world outside of Midgar? And how many discs will that take?