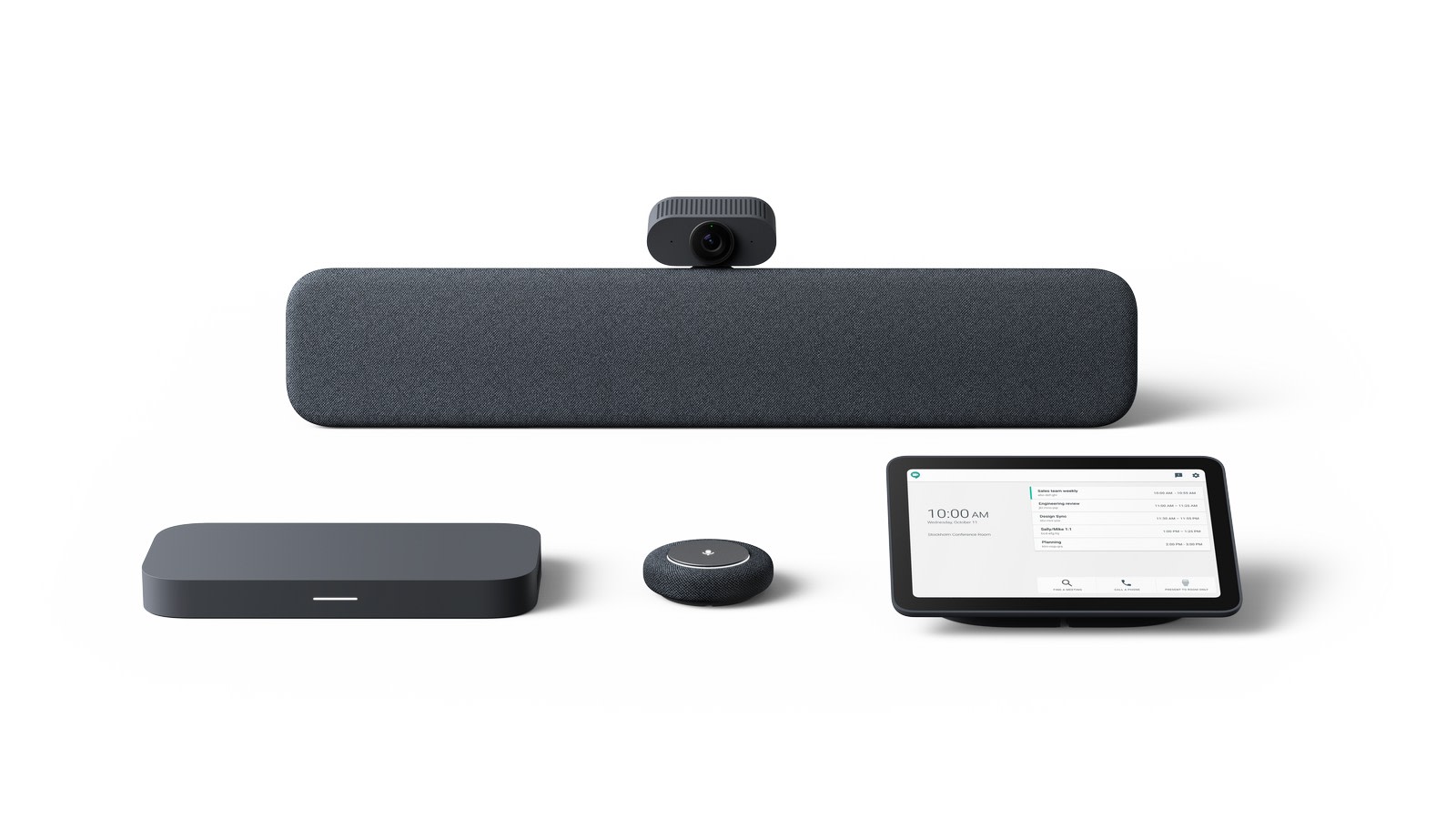 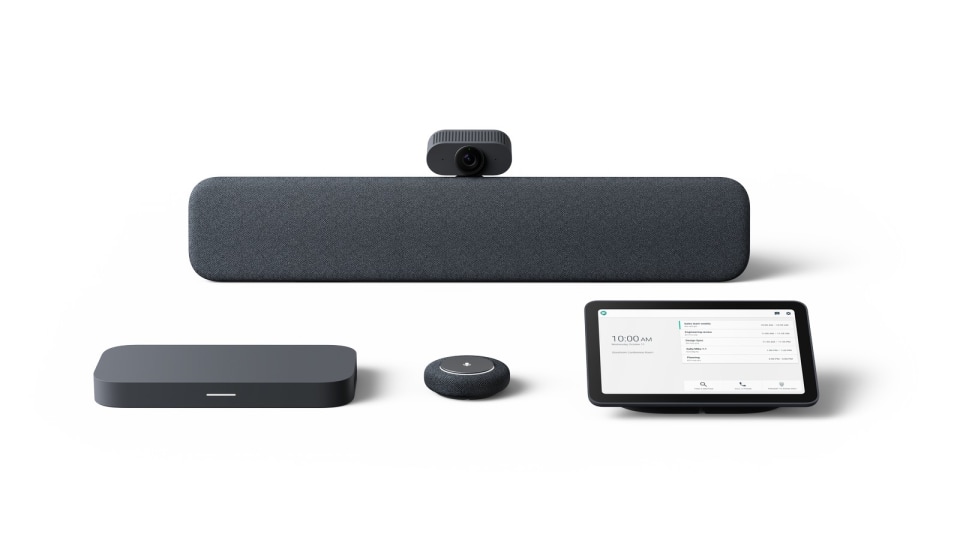 As we begin to consider returning to our offices, Google wants to help make conference rooms more pleasant. The company is announcing Series One meeting room kits today that comprises a soundbar, a pair of cameras, a touchscreen controller, mic pods and a compute unit. The kits will be available in three sets based on room size, and while the company couldn’t share an exact date, it said pre-orders will open soon. Expect more details on when these go on sale in October, when Google’s hardware partner on this project Lenovo will have more to share. If this sounds familiar, it’s because Google tried something similar with a video conference hardware package for Hangouts in 2017, and Series One appears to be another stab at the same concept for Meet.

The new Series One hardware is meant for businesses, so don’t think of it as something you can run out to a store to buy for your home. The basic offering is the $2,699 “Small Room Kit,” and it includes a smart camera, smart audio bar, compute system and rechargeable remote control. The medium and large options come with additional mic pods, a bigger camera and a 10-inch touchscreen controller. Businesses will eventually be able to purchase these items individually, and they’ll be compatible with G Suite management software.

One standout feature of the Series One products is their ability to use Power-over-Ethernet (PoE), so they’ll only need a single cable to both get power and the internet. The compute box will also have RJ-45 ports and color-coded cables to make it easier to manage each component’s wires. So the next time someone unplugs the mic pod and leaves its cable in a mess of wires, you can more easily find the right one.

The compute system is powered by an Intel Core i7 processor and runs Chrome OS with a focus on Google Meet, and all the kits come with room and fleet management via the G Suite Admin Console that many enterprises already use.

The “Smart Audio Bar” is a 2.3-foot speaker that uses Google’s own TrueVoice multi-channel noise cancellation and voice amplification tech. It uses eight beamforming mics and can process up to 44 channels simultaneously. In a recorded demo, Google showed how this system can help keep voices clear while filtering out sounds like crinkling snack wrappers, loud typing and stationery stands being dragged around. In larger rooms, you can get additional mic pods which each have eight mics to help hear every member in the meeting.

The soundbars will also come with a calibration tool that will check the acoustics of a room, determine the microphone range during setup and auto tune levels to make sure the audio it’s playing is optimized for the environment. 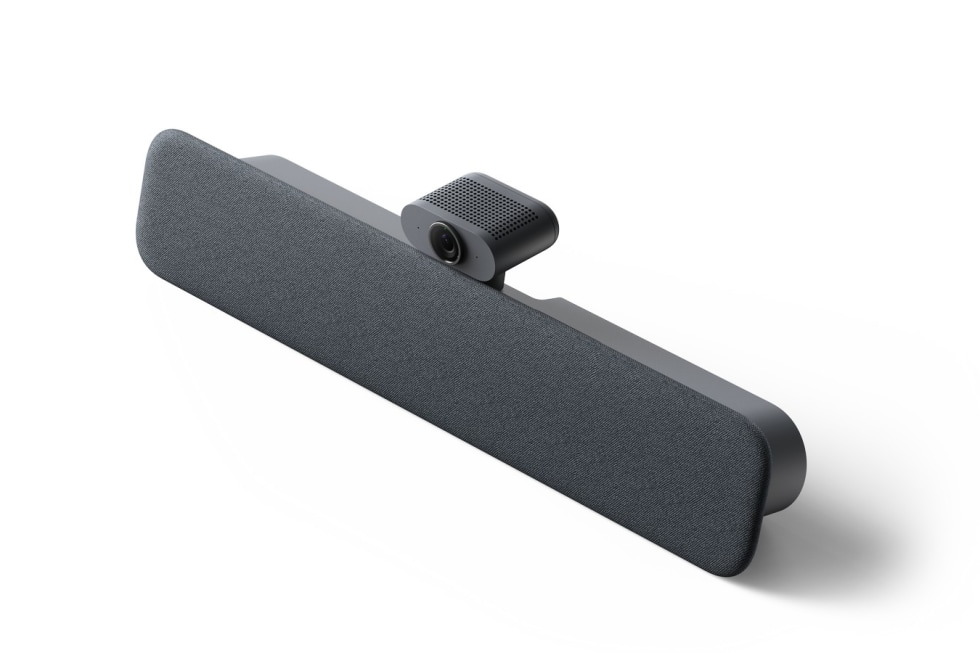 To better see everyone, the Series One kits come with either a regular 12-megapixel Smart Camera or the “XL” version with a sharper, larger 20.3-megapixel 1-inch sensor and 4.3x optical zoom. Both cameras can shoot at up to 4K and offer digital pan, tilt and zoom movements due to that higher resolution. Google also uses similar software to the Nest Hub Max here by offering automatic participant framing. It works with rooms with up to 10 to 18 people

When there’s only one person in a big room, they can use the one-touch auto zoom option on the control panel so callers can better see them. As other people join the meeting, the smart camera will zoom out to include them in the frame. Google said its system recognizes the number of people in the room “based on physical bodies and other attributes and sound,” and that it doesn’t use face scanning. also said that each kit can “anonymously sense the number of participants in the meeting to help monitor room utilization and maintain safety protocols.”

This means the cameras can help keep track of how many people are in a room, and group product manager TJ Varghese said in a briefing that this could be extended further to “any new types of requirements, whether it be social distancing requirements etc.”

Varghese also said the company is aware of issues in cameras rendering darker skintones. “I think this is something that the industry is finally acknowledged and is accepting and we are actively working with partners to develop algorithms that can do this,” he said. The company has a roadmap in place that will look at making “constant improvements on lighting and processing for low light, processing of HDR etc.” We’ll learn more in the coming months, Varghese said, adding that “our goal as Google is to effectively develop and represent darker skin tones in a much better way than traditionally cameras have.”

The remaining pieces of the kits are fairly straightforward. The 10.1-inch touchscreen control panel looks a lot like the Nest Hub Max, while the mic pods are similar to the pucks we already seen in many offices, except for the fabric covering that’s shown up in Google’s other smart home devices. In fact, all the Series One products feature the same rounded corners and fabric that’s prevalent in other Google hardware. The controllers (both touchscreen and simple handheld remote) will support voice control so you can dial into a meeting by asking Assistant to connect you.

Two color options will be available for the entire series — charcoal and chalk — and the small room kit will cost $2,699. Google said it designed Series One to be “an investment for the long haul” and they’re expected to last at least five years. While Lenovo is a launch partner for the new gear, Google also said it might have other products with different hardware makers for the Series in the future. Though the company has partnered with the likes of ASUS and Lenovo on meeting room hardware in the past, the Series One appears to be a concerted effort at making its own devices with well-integrated Google software.

Update: This article was edited to provide more clarity on the differences between the Smart Camera and Smart Camera XL.

In this article: video call, enterprise, video conference, google, smart display, g suite, news, gear
All products recommended by Engadget are selected by our editorial team, independent of our parent company. Some of our stories include affiliate links. If you buy something through one of these links, we may earn an affiliate commission.