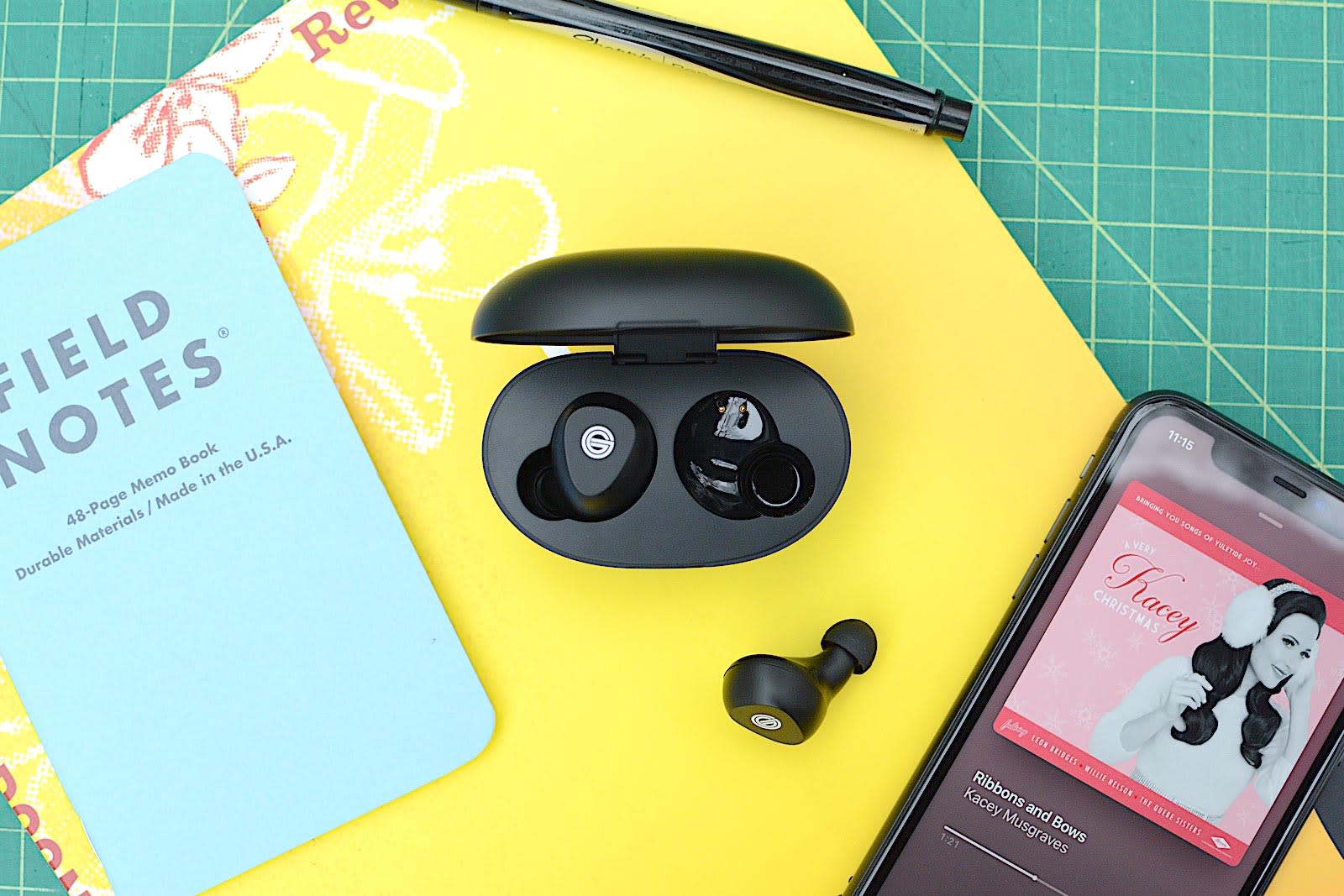 Grado has been making headphones for decades, but the family-owned company was late to the wireless game. Admittedly, it waited until it felt the technology met its lofty standards for audio performance. Grado debuted its first wireless headphones in 2019, keeping its open-back roots intact while offering the convenience of cutting the cord. True wireless is all the rage now, and once again the company did its homework before wading in. With the GT220 ($259), Grado offers its signature sound quality in a set of earbuds that cover all the basics. And sometimes that’s all you really need.

Grado makes a range of headphones, from affordable and basic to truly sonically impressive -- and expensive. Many of those pricier models are built with materials like mahogany and brushed aluminum. However, the company kept it simple with its first wireless headphones (the GW100), and it did the same here with the GT220. The earbuds are very plain-looking and all-black, except for the white Grado “G” logo on the touch panels. Honestly, I’m a little disappointed these don’t have more of the design touches Grado is known for. While I can appreciate there’s very limited space to work with on earbuds, I think there’s room for the typography and finer details for the Prestige Series.

A status light shines through that G icon (blue, red or purple), letting you know when the earbuds are in pairing mode, powering off or going through a factory reset. This area is also the touch panel that accepts your taps and long presses for the on-board controls. And Grado has done a stellar job organizing those so everything is easy to remember. On the left earbud you can summon a voice assistant or take a call. On the right resides all of your audio controls. Lastly, a long press on the left and right handles changes in volume (left is down, right is up).

While the shape of the touch panel is a rounded triangle, the main housing is more of an oval. A nozzle-like extension juts out from the bottom and into your ears, complete with a silicone tip on the end. I can’t tell if it’s the diameter of that component or the length of the “arm” itself (or a combination of the two), but the design here causes the GT220 to sit awkwardly outside of my ear. It’s like I need to be able to push them in further, but can’t. To be clear this doesn’t affect the sound quality whatsoever, and the earbuds never feel like they’re going to fall out. But they do stick out further than it feels and looks like they should, and that makes things a little cumbersome at times.

And then there’s the charging case. The pill-shaped accessory has embossed GRADO text across the lid, with a USB-C port around back and a group of four LEDs on the front. Those lights let you know how much battery is left or what your charging status is. Since there’s four, each one signifies 25 percent, so it’s pretty easy to get an idea of where things stand with a quick glance. This isn’t the smallest case I’ve seen by any means, but it’s still pretty compact considering the five extra charges it offers inside.

To get started, simply remove the GT220 earbuds from the case, and they’ll automatically go into pairing mode the first time. If you need to pair to another device, simply press and hold on either the left or right earbud for five seconds. Because Grado doesn’t offer a companion app, that’s pretty much it in terms of setup. There are no presets to test or any way to change up the on-board controls, so once you’re paired, you’re golden. Those who prize simplicity should be pleased.

In terms of overall comfort, the GT200 is really a mixed bag. Once you find the best eartips for you, the buds will provide a tight fit that keeps things sounding good and goes a long way to passively block out distractions. Unfortunately, the design leads to an awkward fit -- at least for me. Again, the nozzle-like extension that goes inside your ear seems a bit too long, or too wide, so the outer portion of the buds sticks out rather than nestling on the ledge just outside my ear canal. Although the touch controls themselves work just fine, the not-quite-snug fit means the earbuds move quite a bit when you’re making adjustments, especially the press-and-hold volume adjustments.

You’d be forgiven for assuming a set of Grado true wireless earbuds sound amazing, but I can confirm that assumption is accurate. There’s outstanding clarity in the audio profile, so you can pick up subtle details you might miss on other buds. The depth and dynamic range keeps music from sounding overly compressed. I picked up on things like natural reverb from the studio on things like snare drums (where the artists intended it to be heard) and grungy metal guitar distortion has more texture. It’s not just noise, there’s nuance, and the GT220 led me to discover new aspects of old favorites.

That clarity is paired with a well-tuned EQ. There’s ample bassy thump when it’s needed, like when you’re blasting the bombastic drums of Gojira or the droning beats of PVRIS. The GT220 keeps vocals and instrumental details crisp and clear with ample low-end tone, leaving every source of sound layered on top of each other.

Since there’s no companion app, you only have the stock tuning on the GT220. Frankly, that’s just fine because these are quite good sonically right out of the box. There’s also no active noise cancellation (ANC) here either. For me, the GT220 offered a tight fit once I found the right eartips, and the passive isolation was enough to block out any TV noise radiating from my nearby living room. Of course, you also lose any ambient sound mode. That’s not always a companion to ANC -- some earbuds like the Galaxy Buds+ have it without noise cancellation -- but more often than not, the two come as a pair.

Much to my surprise, the battery life on the GW100 headphones far exceeded what Grado promised during that review last year. In fact, I got three more hours than the company claimed. With that in mind, I figured the GT220 would have no trouble hitting the stated six-hour mark, and that there would be a good chance it would exceed that number. Indeed, I managed eight hours of use with the earbuds before I had to dock them in the case. And Grado goes further than most headphones companies when it comes to the charging case. Not only does it offer wireless charging, but it also holds five additional charges for 36 total hours of use. If you’d rather use a cord, the GT220’s case can also be topped off with a USB-C cable.

Despite its age, Sony’s WF-1000XM3 still sits atop my “best of” list when it comes to true wireless. The earbuds are big and bulky, but few even come close to what Sony offers in terms of audio quality and noise-cancelling performance. Plus, the company packs a load of customization into its companion app and will automatically adjust presets based on activity or location. That is, if you’re willing to give the software certain permissions. Perhaps most importantly, the WF-1000XM3 is around $30 cheaper than the GT220 if you have to pay full price. More often than not these days though, Sony’s earbuds hover around $170-$180.

Grado does beat Sony in terms of pure sound though, and if that’s your primary concern, the best alternative is Sennheiser’s Momentum True Wireless 2. The MTW2 doesn’t quite offer the complete package that Sony does, but the earbuds sound really good. Sennheiser also packed in ANC, though it doesn’t block out the world quite as well as Sony or Bose.

Speaking of Bose, if noise-cancelling capability is of utmost importance, the QuietComfort Earbuds are your best bet. Like the WF-1000XM3, they’re chunky, but Bose managed to bring its outstanding active noise cancellation tech from its over-ear headphones to true wireless earbuds. You’ll find a better mix of features elsewhere, but you’ll have a hard time matching the QC Earbuds’ noise-blocking abilities. Again, sound quality isn’t as good as what Grado has, and this Bose model is pricier at $279.95.

There’s no question the GT220 sounds amazing, and for some people, that’s all that matters. When you factor in the battery life, wireless charging and reliable on-board controls, Grado covers all the basics with its first true wireless earbuds. However, some will want ANC to counter noisy environments, while others would like the ability to change up the touch inputs. And if you’re like me, you may have to contend with a slightly awkward fit. Grado falls just short of the complete package here, but for a company obsessed with sound quality, it delivers on nearly every promise it makes.

All products recommended by Engadget are selected by our editorial team, independent of our parent company. Some of our stories include affiliate links. If you buy something through one of these links, we may earn an affiliate commission. All prices are correct at the time of publishing.
View All Comments
Grado GT220 review: Stellar sounding wireless earbuds that cover the basics