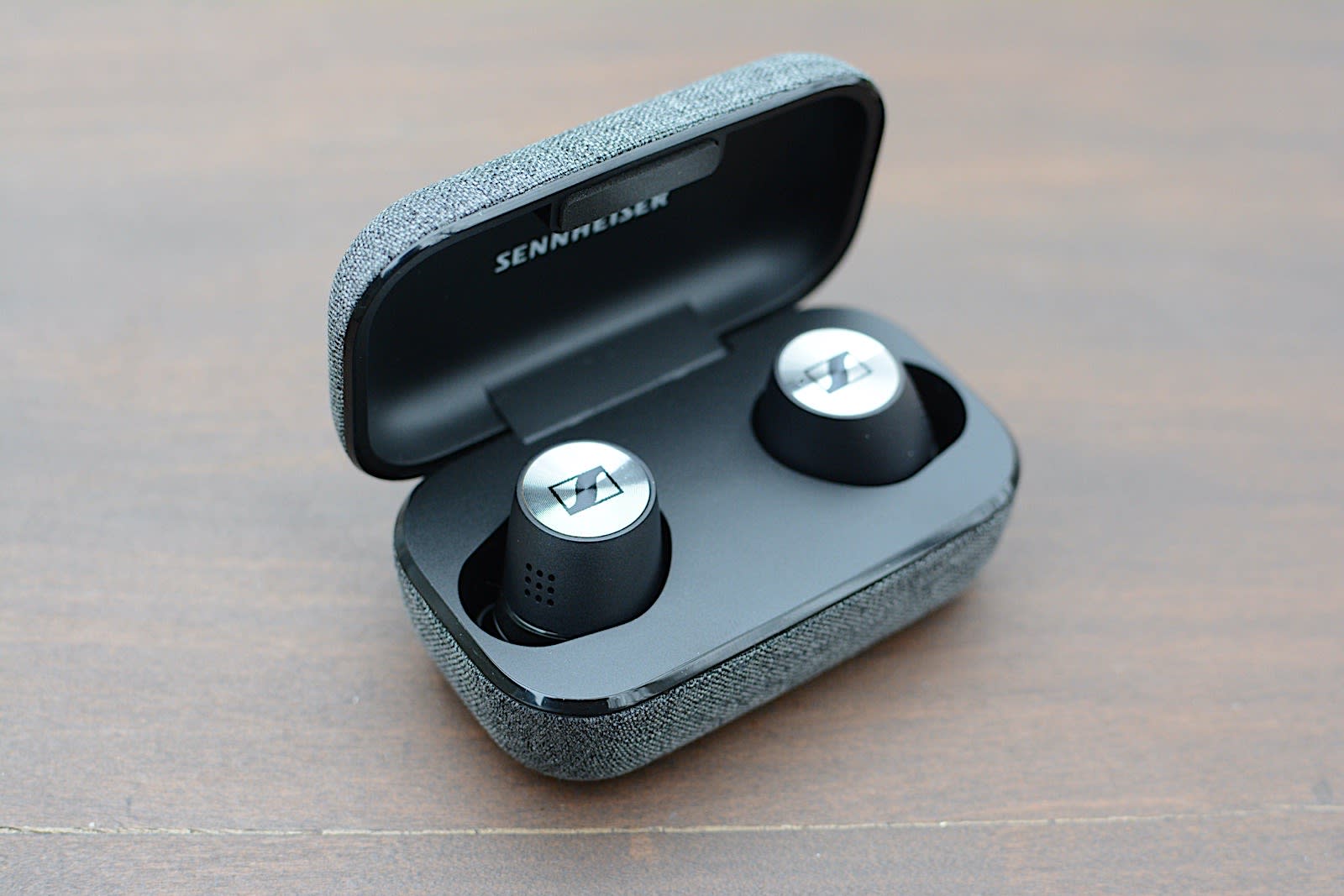 Sennheiser debuted its first true wireless earbuds in 2019. And while the Momentum True Wireless had that stellar sound profile the company is known for, there were a number of things that made them frustrating to use. Now the company is back with the Momentum True Wireless 2 ($299.95). It added active noise cancellation (ANC) and improved battery life, but the earbuds are still just as pricey.

Although Sennheiser says the Momentum True Wireless 2 (MTW2) is only two millimeters smaller than the first-gen model, the size difference is noticeable in depth and diameter. It's still larger than the Jabra Elite 75t ($180) and the Samsung Galaxy Buds+ ($149), but every little bit helps. Other than stature, the MTW2 is pretty much identical design wise. The touchpad on the outside of each bud is still textured metal with the logo emblazoned on both sides. The microphone array on this new model is a six-hole square pattern instead of single dots, but that's only noticeable if you're looking closely. The charging case is also the same size and shape, although this time the fabric is a few shades darker and the logo on top is now white instead of black.

The onboard controls were a source of unending frustration on the first Momentum True Wireless model. That was especially true when it came to any actions that required multiple taps. Thankfully, that's no longer an issue. There's a beep that increases in pitch each time you tap on the earbuds, so there's audio feedback to guide you. It seems simple, but it's helpful. On most earbuds like this, you're left guessing if you did it correctly -- waiting to see if the track actually skips ahead or if you've accidentally summoned Siri. 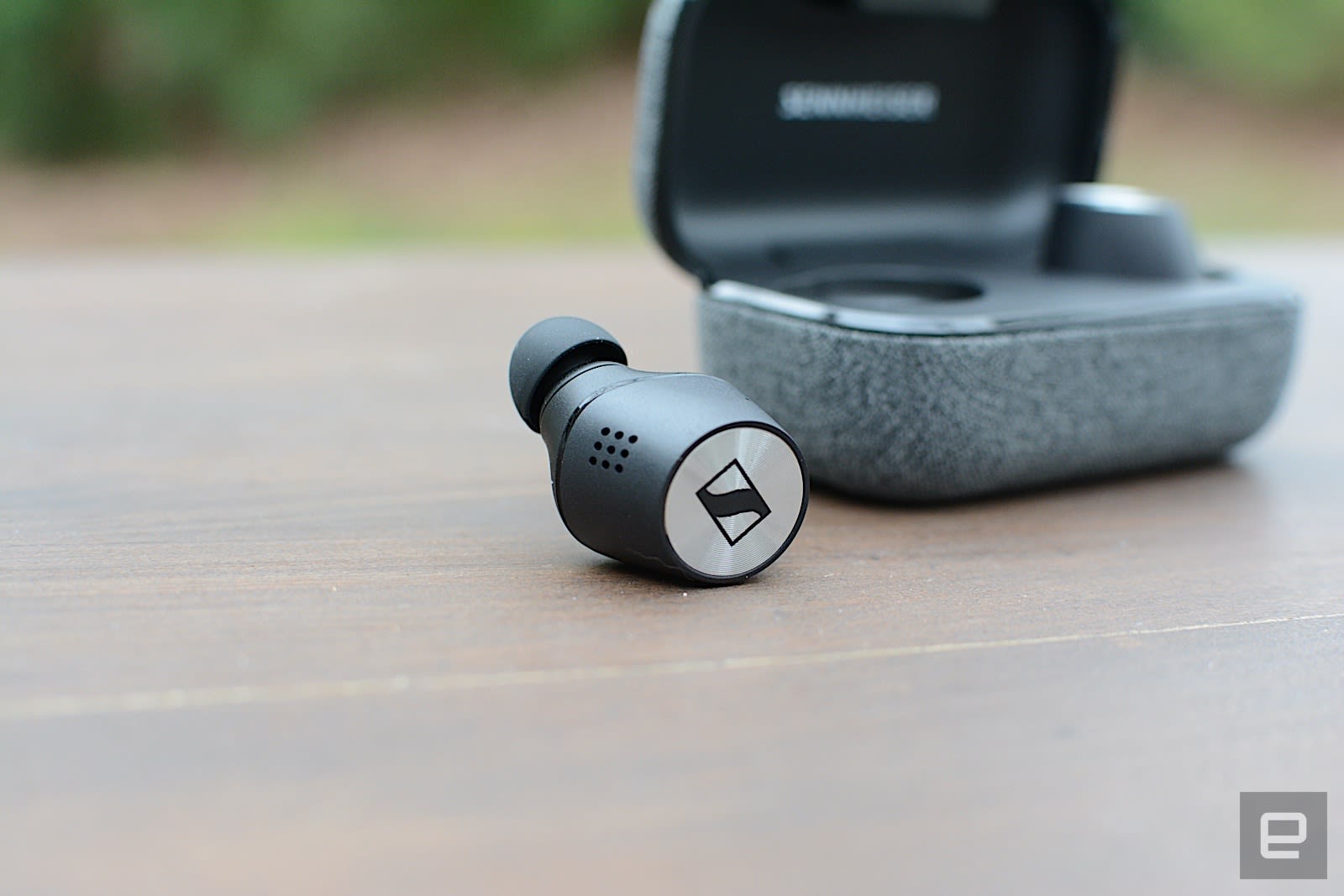 Those controls are still organized the same way. All the playback options are on the left earbud: play/pause (one tap), next track (double tap), previous track (triple tap). On the right side, a single tap will summon your voice assistant. A double tap turns on Transparent Hearing, which is Sennheier's term for ambient sound. Last, a triple tap on the right earbud activates ANC. Volume controls are still a press-and-hold action: Doing so on the right increases the level while the left lowers it.

With the company's Smart Control app, you can not only adjust the EQ curve to fit your sonic preferences but also customize the onboard controls. And it's not just one action on each side either. You can completely change all the single, double and triple taps as well as the press and hold. So if you're like me and prefer the playback controls on the right side instead of the left, you can make that change in the app. There is an option to restore the default settings, but it doesn't work. Sennheiser is clear that the software for the MTW2 is in beta, so hopefully that bug is taken care of soon -- mostly because I got rid of the volume controls, and now I can't get them back. Trust me, it's awful. With the software obviously still under construction, it's not a dealbreaker. Just proceed with caution for the time being.

Inside the Smart Control app, you can actually choose to pause the audio when you activate Transparent Hearing or keep the music going. The latter is something I used while walking down the street, for example. The software also allows you to disable features like smart pause when you take an earbud out of your ear and sidetone (the audible feedback of your voice during phone calls) as well as has the ability to automatically accept calls when you remove the right earbud from the case.

The audio quality was great on the first-gen Momentum True Wireless. In fact, it was one of the best-sounding units I tested in 2019. Sennheiser consistently creates an audio profile that highlights minute details of songs, from the "noise" of acoustic guitar strumming to the depth of synths and drum machines. The trademark tone is warm, pleasant and inviting. That's all true of the MTW2, even with the default tuning. I usually need to tweak the EQ on headphones to get them to sound their best, but I didn't feel the need here. You might like a little more bass, a touch more mids or a dash of treble, but the MTW2 sounds great straight out of the box. Still, Sennheiser will allow you to do so if you don't agree with me.

With Phantogram's Ceremony, bass lines are big and boomy but with detailed depth, and it never drowns out the rest of the instruments. Claps, hi-hats and other sounds in the higher range are punchy. The snare drum is crisp and cuts through while the vocals seem like they envelope you. You get the details of the synths, drums, guitars and more. That's true of other genres too -- whether it's Caspian's atmospheric post-rock or Kaytranada's expertly produced hip-hop. 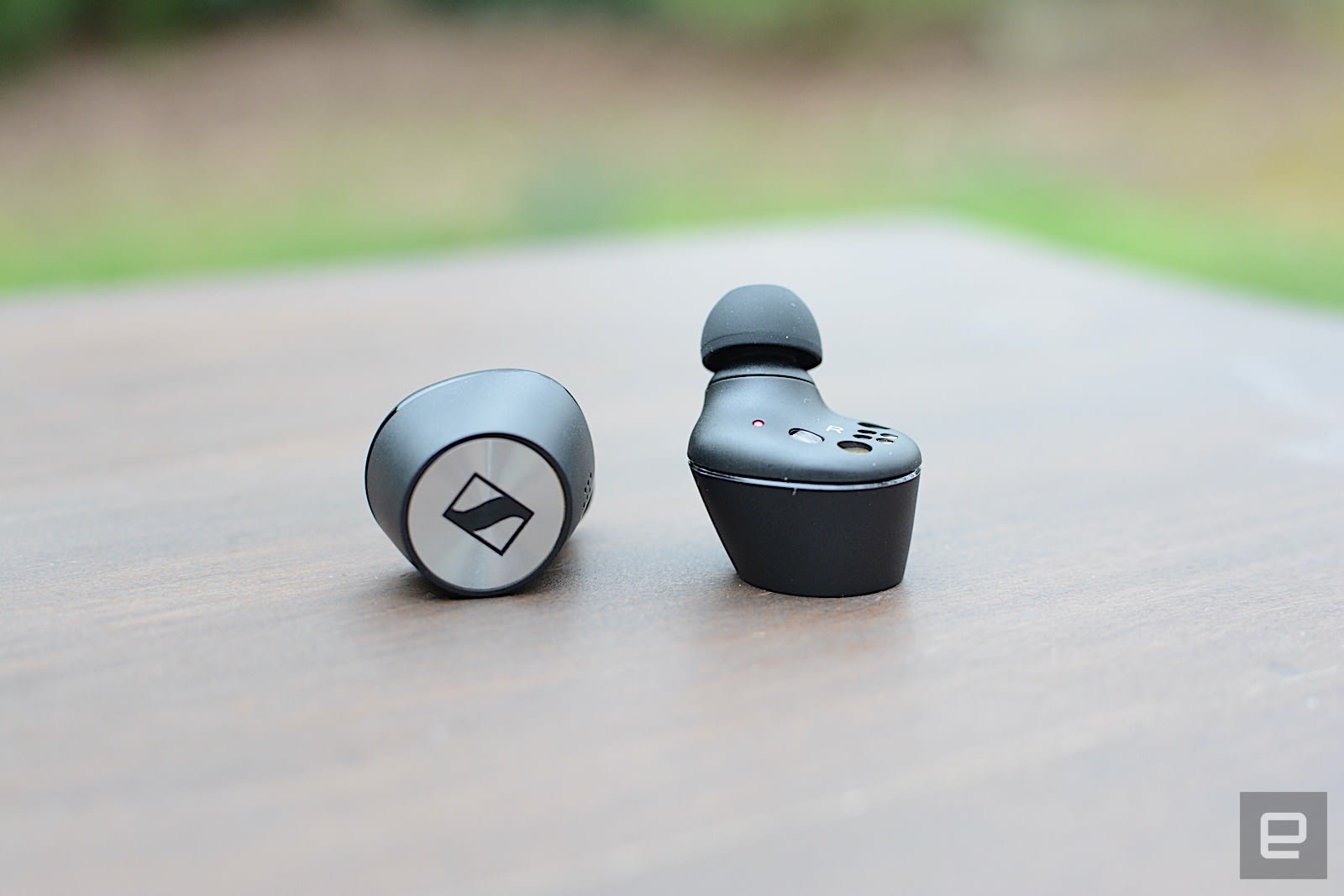 ANC is also nicely done on the MTW2. It doesn't kill all noise, but it does offer a noticeable improvement over passive noise isolation of the earbuds alone. The ability to control the level of noise cancellation would've been nice, but being able to turn it on and off is adequate. At least the Transparent Hearing feature works well. With much of the competition, it still sounds like you're listening to the world with earplugs in. But with the MTW2, I almost felt like there was nothing between me and my surroundings. I could hear everything clearly, and the sounds weren't particularly muffled. I certainly didn't feel the need to compensate in conversations by raising my voice.

Sennheiser says it increased the battery life on the MTW2 to seven hours on the buds themselves -- up from four on the first model. While the competition is hovering around 10, with some offering even more than that, it's respectable that Sennheiser almost doubled the battery figure on this new version. With the volume at 80 percent or higher and ANC on throughout my tests, I managed just over six hours before the MTW2 needed a charge. The company is clear that active noise cancellation will impact battery life inside of its app. Thankfully, Sennheiser included a 10-minute quick-charge feature that gives you over an hour of listening time. The Smart Control app displays battery life of the earbuds, but it was showing 10 percent when they died on me. And the spoken warnings began not long after I hit that mark. 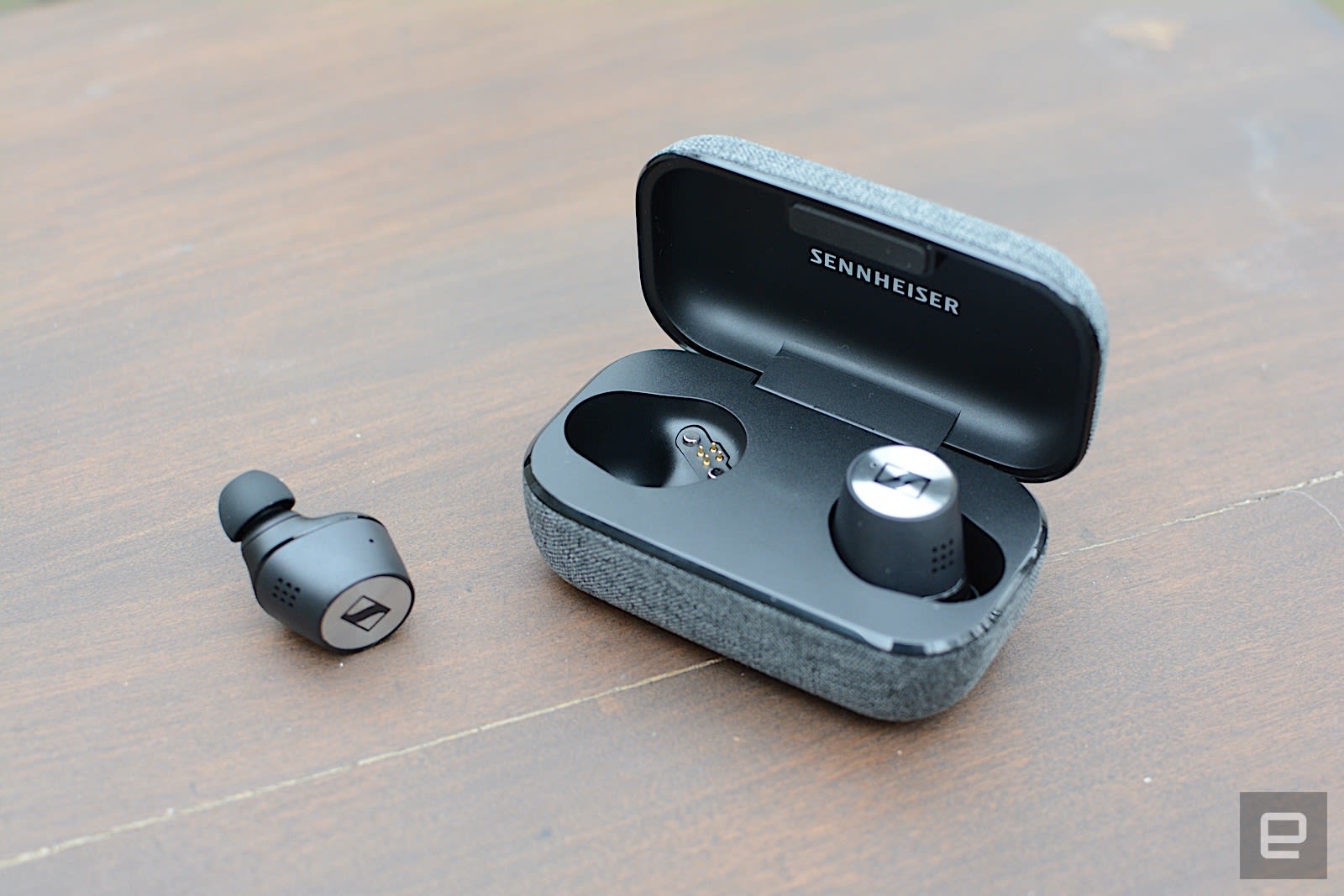 At almost $300, the MTW2 is firmly in the premium tier with the likes of Bang & Olufsen and Master & Dynamic. B&O's third-generation E8 sound good and come with a wireless-charging case, but they lack key features like automatic pausing and ANC. Those omissions make them hard to recommend at $349. Master & Dynamic's MW07 Plus ($299) are a big improvement over its first-gen version. The acetate shells aren't for everyone, and there's no companion app for customization, but the standard features are all there -- as is active noise cancellation. However, you can get a full set of features, including powerful ANC, with Sony's WF-1000XM3 for around $230 -- though they've been on sale recently for less than $200. Those earbuds will be a year old this summer, but they still hold their own against the latest models. The only thing the WF-100XM3 doesn't have is a wireless-charging case, which still isn't standard, though it's becoming more common.

Sennheiser's Momentum True Wireless 2 are definitely an improvement over last year's model. They're slightly smaller and have better battery life, and ANC does a solid job of reducing ambient noise. The company's handy app is back, and it allows you to customize everything from touch controls to the EQ. Thankfully, annoyances like touch controls on the previous version now perform more reliably. The MTW2 is an excellent set of true wireless earbuds, but when options with nearly identical features are available for much less, the nearly $300 price is hard to justify, even if the sound quality is stellar. It's clear that the competition has caught up to Sony though, and true wireless earbuds like the MTW2 are evidence of that. Of course, Sony still has the advantage in terms of price.