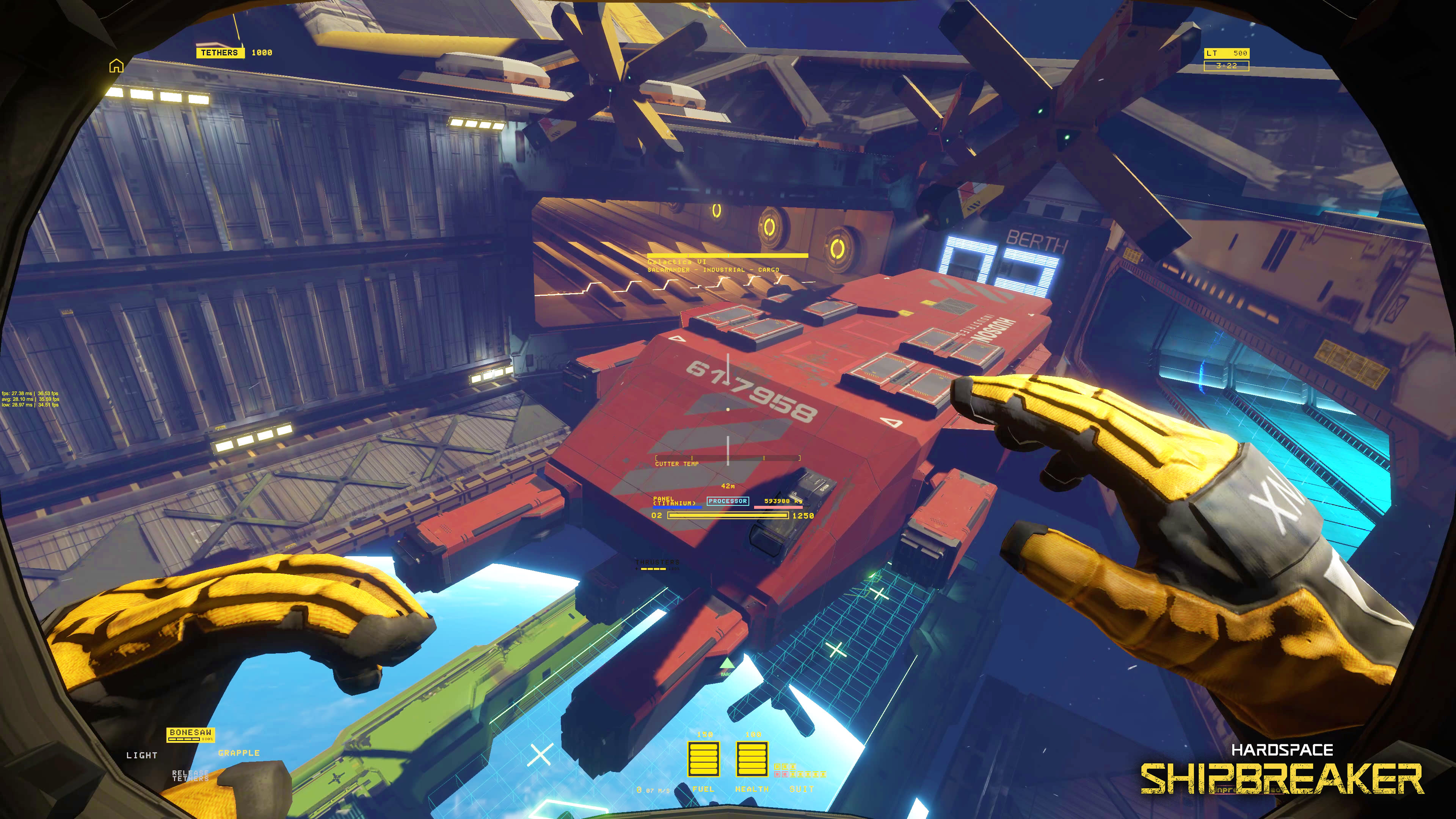 ‘Hardspace: Shipbreaker’ is a puzzle-solving parable

Hardspace: Shipbreaker is a game from Canadian studio Blackbird Interactive that launches in Steam Early Access on June 16th. You play as a shipbreaker, tasked with the dangerous job of cutting up disused spaceships to salvage their contents. Wearing nothing but a spacesuit and armed with a laser cutter and tether, your mission is to make enough money from these hulks to earn your freedom. But each vessel is packed with hazards that can kill you in an instant if you make a mistake.

In the game, you emerge from your habitat module and jetpack over to where today’s job floats in front of you. These vessels aren’t clean and tidy, however, and you have live electricals, fuel tanks and pressurized cabins to deal with. That means that you can’t simply go in blazing with your laser cutter — well, you can, but you’ll not live to regret it.

Instead, you need to act strategically, pulling apart the ship’s external equipment and hacking off any external hardware before venturing inside. Because the cabins are pressurized, you’ll need to gently find a way of getting the high-value gear left inside, like computers and chairs, outside. There, you’ll drop them into a barge that sits below the drydock and tells you how much cash you’ve earned. Only when you’ve picked it clean can you depressurize the hulk and start pulling the ship’s superstructure apart. That’s where the most volatile and valuable prizes sit, including the ship’s still-working nuclear reactor.

But one false move with your laser cutter, or if you dismantle a system in the wrong order, and it’s curtains. Hit a fuel line and it’ll explode, damage a power junction and you’ll get shocked, and puncturing the hull inside a pressurized cabin will cause it to explode. If a piece of flying debris hits you too hard, or you crash into it at speed, then you’ll feel it. And that’s before you get to the problems of your equipment failing and setting you on fire, or you run out of oxygen.

In my experience, the game works best when played with a gamepad rather than keyboard and mouse, all the better to move in zero-gravity space. Having 360 degrees of movement feels unprecedented for this type of game, and something you’ll need to master early on if you don’t want to feel lost. “It’s a really important part of the game to get your bearings in the salvage bay,” says Trey Smith, the game’s director, “because [otherwise] it’s the Ender’s Game thing where you don’t know which way is up.”

The game’s main conceit is that you — the game asks for your real name when you start — have escaped a miserable life on a deserted, ruined Earth. To do so, you signed your life away to the omnipresent, sinister Lynx Corporation, which, essentially, now owns you. By covering the millions of dollars to get you into space, Lynx subsequently charges you for everything, so you are in the company’s constant debt.

And, every time you die, Lynx resurrects you at a substantial cost, which is added to your total debt. Plus, every time your shift ends, you have to pay costs to the company, including renting your equipment (which you pay to maintain) and your living quarters. You’re essentially signed up to a life of bonded labor, a form of modern slavery that the International Labour Organization says affects millions of people all over the world.

“There’s a part in the progression where it feels like you're getting buried, and that was by design,” says Smith. “But as you progress and earn certifications and get better tools, and can access these more expensive ships,” he said, “you’ll see a light at the end of the tunnel.”

I’ve been playing for around eight hours now, and I know my way around the game’s first class of vessel relatively well. There are moments when a plan comes together, and you make the right cuts in the right order and everything floats to their intended destination. When you’ve mastered the initial game and things start to click for you, it’s hard not to get engrossed in it. The kick you get from successfully deboning a starship is strong enough that you just can’t wait to get back to do it again.

In fact, a quick one-hour session to test the game quickly spirals to eating a whole evening as you get engrossed in your current project. “We target flow,” said Smith, “the player just gets immersed into the experience and the real world melts away.” It’s serene and satisfying to float around making a plan and working out how best to tackle each ship in turn.

The one annoyance is that the game caps your oxygen supply to a level I found frustrating at best, and punishing at worst. Finish the tutorial section and you’re given a 250-second window to do some salvage and race back to the habitat module to buy another oxygen canister. Smith says that this is to help players learn the geography of the bay with the constant shuttling back and forth, as well as teaching them to use the grapple to get there and back faster.

The tight window is also to help reinforce Smith’s notion that this is “blue-collar” work — a 15-minute shift, broken up into 250-second loops. The further up the tech tree you go, the bigger your oxygen tanks can get to extend the loop when the ships get more complex. It’s the one thing that didn’t click for me as it acts as a needless distraction that breaks up the puzzle-solving elements of the game. It’s tough enough already, I think, to extract the gear from each vessel without dying, before you add the busywork of running back and forth to top up your air.

You’re free to try some big or clever ideas to make your shipbreaking more efficient, but don’t be surprised if they blow up in your face. In one attempt, I tried to fill a pressurized room with all the high-value items while I depressurized the rest. My grand plan was to try to tilt the ship to face the barge, force an explosive decompression and send all the prized items hurtling down to the recovery barge in one go. It didn’t work, and I blew the ship up, killing me in the process and leaving a dead husk to clean up after my resurrection.

Smith says that there is no right or wrong way to tackle each salvage operation and his team has been surprised at the variety of approaches taken. While showing the game off at PAX East, the team ran a competition to see who could salvage the most in the shortest time. “This was a very simplified ship,” he said, “and even with the simple systems that were inside, we saw crazy ways that people were doing things,” which were “completely different than any of us on the dev team had done.”

BlackBird Interactive was founded by former members of Relic Entertainment, the makers of the original Homeworld. It first began work on a spiritual successor to that title called Hardware: Shipbreakers. After much corporate wrangling, the RTS was renamed Homeworld: Shipbreakers and then Homeworld: Deserts of Kharak. Work began on Hardspace: Shipbreaker shortly after finishing Deserts of Kharak, but despite the recycled name, the games are entirely unrelated.

“It started with a game jam,” explains Smith, “after shipping Deserts of Kharak about four years ago, the studio broke into groups of five for a week.” The game his team developed was called Hello Collector, “where you floated around and collected space wreckage,” he explained. Studio heads liked the idea enough to put a small team on working out the concept, and it snowballed from there.

Because a relatively small team made the game, the crew totaled fewer than 10 for a big chunk of its development. Consequently, a mix of hand-made creation and procedural generation built the game’s legion of trashed ships. “In the early days of development, all of our ships were handcrafted,” said Smith, “the ships were beautiful to look at and we could script ‘wow moments’ into them.”

But the rigors of making hundreds of ships was too much for such a small team, so they tried procedural generation instead. But these vessels didn’t offer the quality and playability that the handmade ones did. So the team “took the best from both worlds,” said Smith, with hand-designed models offering the basic parameters that the procedural generation could then fill in as it desired when a new ship is requested.

“BlackBird has a ‘thing’ for ships, spaceships and otherwise because of our deep roots in Homeworld,” said Smith. “We wondered what shipbreaking [in space] would look, sound and play like,” drawing inspiration from the Gilded Age of America. Despite the enormous prosperity such an age would bring, “all of those things came at a human cost,” said Smith. And so they took that idea to its logical conclusion out in the future of space.

But, says Smith, “It’s not a political game.” Instead, he says it’s just about creating an emotional story that helps connect with the players. Smith used the example of people who say that to make an omelet, you have to crack eggs, “Well, we don’t want to just blast through the egg-cracking bit.” Instead, the game’s focus is on telling “the stories of the hardship and some of the people that it wasn’t great for.” Indeed, it’s much like the stories of real-world shipbreakers who earn just dollars a day to break apart vessels in Bangladesh or the colonists who left Europe for indentured servitude in British America.

“Early Access” is often shorthand for a game that’s half-finished, broken or otherwise not worth your time. Hardspace, however, already feels like a finished product, bar the fact that your grapple sometimes disappears when you’re too close to a ship’s hull. Smith expects the game to remain in Early Access for a year to help build out the rest of its story and add modes beyond the regular single-player campaign.

Buy the title at launch and you’ll be able to play the first “act” of the game’s three-part story, “We’re aiming to have a definitive end to our campaign, but we also want to allow players to keep playing if they wish,” said Smith. That initial part will cover around 15 hours of gameplay, with the other chapters play times yet to be determined. As well as that, the finished game will have multiple difficulty levels, daily challenges and a “Hardcore” mode where people only have one life to complete the story.

And, in the finished game, there will be a number of different vocalizations recorded to represent the player character. “Hopefully they find a vocalization that they can relate to, and it makes them feel like [they’re in the game],” said Smith. “You’re not just playing as ‘Cutter Guy,’ or Master Chief or Gordon Freeman,” he added, “that’s why we put your name on the contract. It was important for us, too, that the things that are happening in the game are happening to you, not the character you are playing.”

Hardspace: Shipbreaker will launch June 16th on Steam Early Access at $19.99 for a limited time. After that, it will sell for $24.99, with PlayStation and Xbox editions penciled in for some point in the far-flung future.