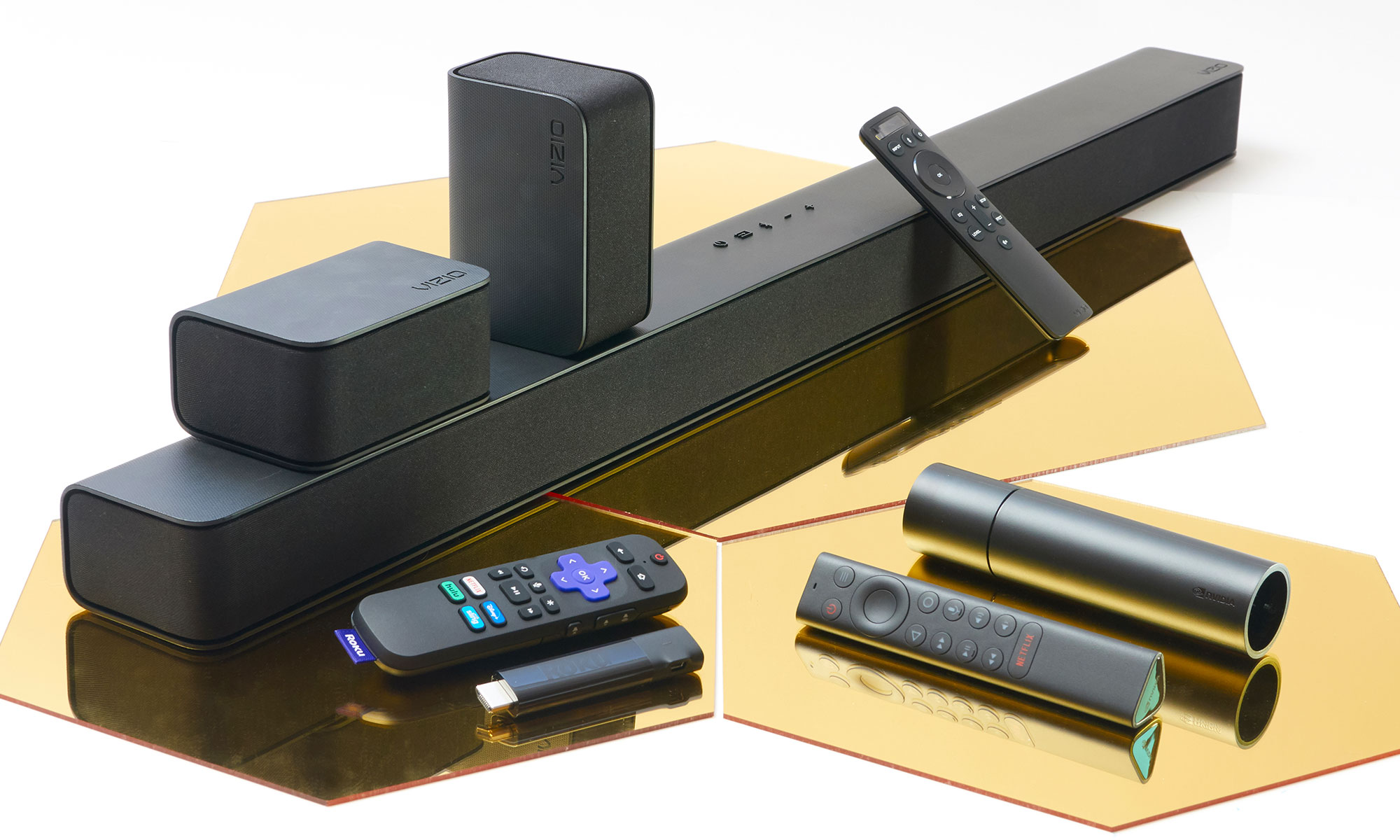 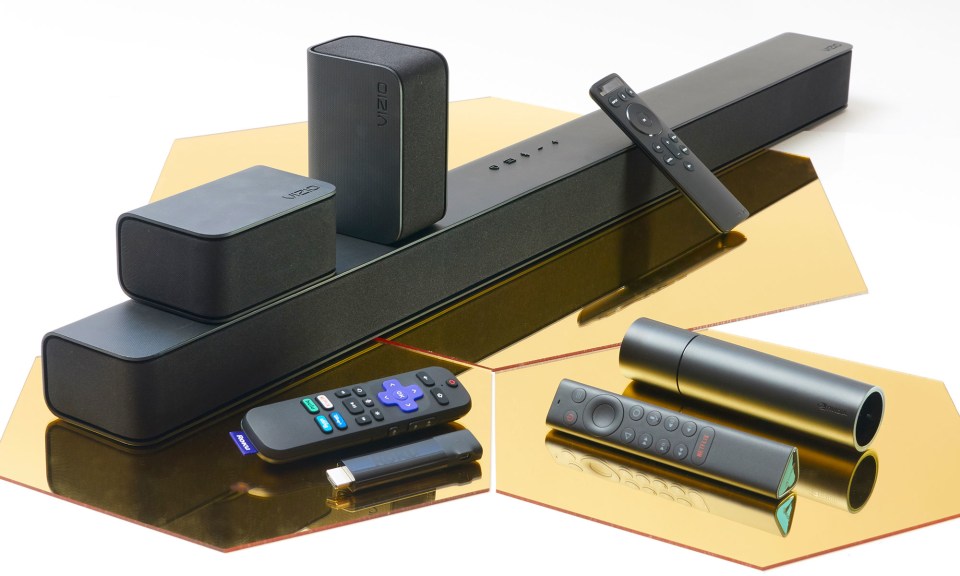 With movie theaters largely off the table and new game systems on the way it’s the perfect time to upgrade to your home theater. Whether you’re looking for a $50 stocking stuffer, a big-ticket new TV or something in between there are plenty of ways to improve the room where you spend a lot of your time. Faster apps, bigger screens and more control are right at your fingertips, so let’s take a look at some of the best devices available right now.

If you're looking for the simplest upgrade for your TV, the Streaming Stick+ fits the bill. It's USB-powered so you may not even need to find a nearby outlet and it's small enough to fit in a pocket when you're taking a trip (or staying with relatives) so you can bring your own apps and queues along for the ride. And with the addition of Peacock, Roku's software platform is close to getting back to the universal app support it's always enjoyed (we're looking at you, HBO Max).

The Shield TV is more expensive than most dongle-sized devices, but its Tegra X1+ processor provides enough power to handle everything the Android TV platform can throw at it, along with Dolby Vision HDR and Dolby Atmos audio.

The standout feature is AI-powered upscaling that's supposed to get better with updates, and since the device premiered last year, NVIDIA has already delivered some improvements. It works with Google Assistant and Alexa, and even has expandable storage if you'd like to bring along some content for offline viewing.

For the first time since it arrived a few years ago, Google has fully refreshed and rethought the Chromecast. While it's still a compact streaming device that you can operate almost entirely from your phone, the new unit is built to manage content across different apps, includes a remote control and only costs $50.

That's key for a lot of people who still might not be ready to manage all of their TV and movie watching via an app. If you prefer voice control then Google Assistant is a button press away. Eventually, there will be support for game streaming with Stadia to go with its existing Cast support, Dolby Vision HDR and Android TV platform to make for a more capable all-around streamer than any other device you can find.

If this gift is going to someone who just cares about picture quality, then TCL's 65-inch 8-Series TV can deliver that. It features mini-LED backlighting that can give deeper blacks than almost any other LED TV, which is perfect for watching 4K HDR streams. For a night in at home, not much else matters and this TV is uniquely well-suited for an eye-pleasing experience whether you're watching sports or the latest movie.

It doesn't include the HDMI 2.1 ports gamers with new consoles are looking for, but for everyone else, it's still an excellent option and the prices are continuing to drop.

For a cheaper option, TCL's 2020 6-Series TV also includes mini-LED backlighting. To accommodate the lower price, it has a more basic design as well as fewer lighting zones in its backlight. As a result it’s not quite as good at handling bright objects on dark backgrounds, but it’s still an impressive display that should deal with sports, gaming and TV just as well as pricier TVs.

What this has that the 8-Series doesn’t is variable refresh rate support which should enable tear-free gaming even at high frame rates. With Roku's smart TV platform and plenty of apps built-in, it's the 4K and Dolby Vision HDR-compatible upgrade you've probably been waiting for at a price that’s easy to handle.

For the best image quality around, LG's OLED TVs are still hard to beat. They come with HDMI 2.1 inputs that should make them an incredible combination with new gaming hardware, whether you're plugging in a PC with support for FreeSync or G-Sync, an Xbox Series X or PS5.

For movie fans the benefits are just as clear, with some of the best 4K upscaling and built-in Filmmaker Mode support that automatically ensures you're watching movies with the optimal settings. Finally, with sports schedules constantly shifting, the Sports Alert pop-ups that can direct you to the right channel at the right time are especially crucial. The LG CX series isn't the cheapest option available, but across the board, it's one of the best.

Over the last few years, Vizio has made a name for itself in audio with soundbars that deliver a big boost on a budget, and this year's lineup continues the trend. This 5.1-surround sound setup is available for less than $300 but it's ready to seriously expand anyone's home theater capabilities. It also includes an option that connects it to your smart speaker via Bluetooth or line-in audio.

The subwoofer is wireless and satellite speakers that connect over 15-foot cables should let you position things suitably in most rooms. At this price, you won't find Dolby Atmos audio, but it is a real surround sound experience and the built-in DTS Virtual: X can create the impression of 3D sound that usually requires a more expensive setup.

For someone who really wants to recreate the theater experience at home, a projector is the upgrade that will make the biggest difference. You can find ViewSonic's PX727-4K projector for well under $1,000, and enjoy all of your streaming or gaming content on the biggest screen you can find.

With support for HDR and 4K (via pixel-shifting), it's well-positioned for home viewing now and into the future. The low entry price means there's money left over to upgrade your speaker setup and snack situation to create a realistic theater experience without tickets and lines.

Who isn't frustrated by swapping through all of the different devices we're connected to? Logitech's Harmony Companion has been around for a while, and it's still your best option to tie everything together. Harmony Activities can tie together home automation magic -- imagine your living room automatically configuring itself for football on game day -- that works across whatever hardware you're bringing to the table.

WiFi, Bluetooth, IR? It connects via all of those and with the app, you still have control of what's happening even when you're away from home. Google, Apple and Amazon all have their own home automation assistants, but for an entertainment-focused approach the Logitech remote will get folks settled and watching TV more easily than the others.

Whether you know a home theater nut who has everything or someone who's just getting started, lighting might be a part of the experience they haven't addressed yet. Enter the C by GE smart light bulbs. A two-pack is available for less than $50 and allows full control with dimming and color-changing over Bluetooth.

If you add in a smart plug (or opt for the Direct Connect units that have yet to debut) then they can work with smart home assistants from Google or Amazon, and allow for control even when you're away. Whichever way you go, they can help set the mood for movie night, and with color control, they can tweak the ambiance to help you go from Doc McStuffins to an action movie, or even something in between the two.

The gear to get for your next winter adventure