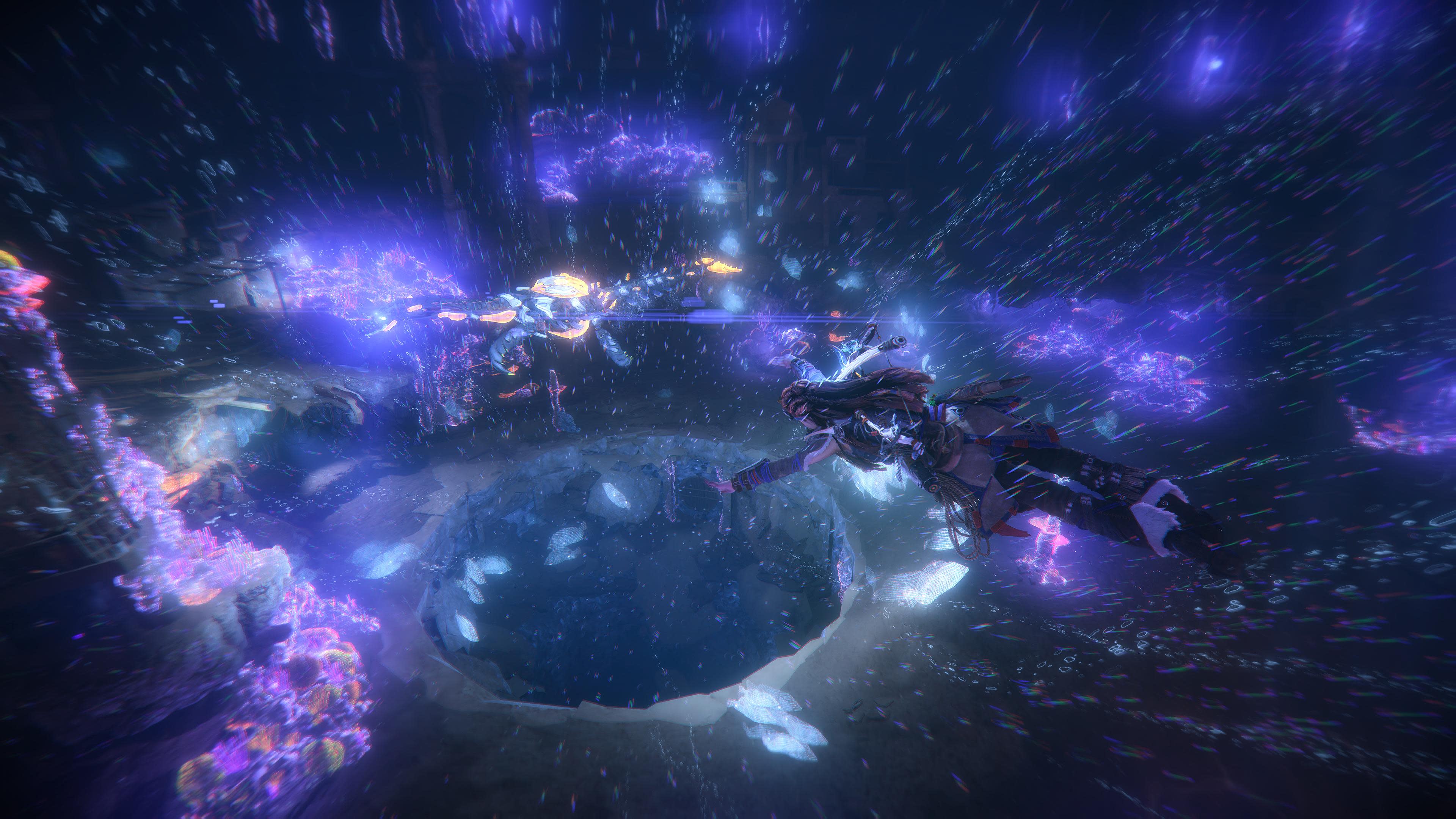 This time around, Aloy conquers land, air, sea and my heart.

When Guerrilla Games revealed that Horizon Forbidden West would have underwater gameplay, I was not excited. I was in the minority with this feeling, but I have a ridiculous, lifelong fear of large things in deep bodies of water, and games in these settings genuinely freak me out. I’m still recovering from the shark scene in Batman Arkham Asylum.

However, Forbidden West has won me over, thalassophobia and all. The underwater environments are terrifying and filled with gigantic robot monsters, but they’re also beautiful and rich, inviting Aloy to explore new layers of her world. From the submerged ruins of Las Vegas to a volcanic hot spring buried under a mountain, swimming is shockingly one of my favorite activities in Forbidden West. That, and overriding Tallnecks.

Forbidden West takes place right after the events of Horizon Zero Dawn, and Aloy is once again on a quest to save the world. She has to restore GAIA, a planet-wide AI system that will rid the lands of a devastating disease, and also investigate waves of murderous machines that are appearing across the continent. She has a Focus, which allows her to scan enemies and environments for information, unlocking the secrets of past civilizations.

Aloy travels to the southwest and west coast of the former United States, crossing snowy mountaintops and sand dunes dotted with Joshua trees before arriving at the ruins of the Golden Gate Bridge. Here, it has to be said: Forbidden West is gorgeous. I played on PlayStation 5, and some of the landscapes in the game left me breathless. There’s something special about sunsets in the southwest; they burn brilliant reds and purples in the thin desert air, and Forbidden West captures this essence beautifully. I should note that the game’s Photo Mode tends to blow out nighttime scenes, so it’s harder to save those moments as they appear during play.

As Aloy heads west, hostile tribes and violent machines regularly appear in her path, providing ample opportunities to level up, test new skills, collect special valuables and override some robots to make them rideable — yes, even the flying Sunwing that's heavily featured in the game's marketing.

My personal favorite mount is the Bristleback: It’s a big warthog-like machine with a plump booty and the ability to harvest metal shards as it waits for Aloy to finish a mission. Returning to piles of sparking Bristleback salvage is a necessary perk of saving the world, as far as I’m concerned.

Plenty of familiar faces join Aloy on her journey, including Varl and Erend, and she ends up collecting new companions like Pokemon at her west coast base. There are also new threats in this world, and without spoiling any story points, the game’s narrative arc covers class warfare on an extreme scale, with egocentric trillionaire technology leaders at its core.

The new friendly characters have distinct personalities, backgrounds and skills, and they’re incredibly charming. By the final missions, it feels like Aloy has her own little Scooby-Doo gang, Bristleback included.

However, Aloy is often on her own – and this is especially true when it comes to underwater levels. Aloy ends up crafting a breathing apparatus that allows her to dive infinitely, and with the whole oxygen problem out of the way, she’s free to investigate a series of vast underwater landscapes, slinking among massive Snapmaws in the process. Her Focus behaves differently beneath the surface, pinging like submarine radar when it’s left on. Underwater, it feels like Aloy is flying around an alien planet, and these moments are so quietly engaging I almost forget to be scared of the giant, murderous dinosaur robots that are also swimming around.

The most memorable underwater environment is Las Vegas. It’s submerged but still soaked in neon coral, with crumbling escalators leading nowhere and buildings cracked through with algae and seaweed. The base of the replica Eiffel Tower grounds the entire scene in a twisted kind of reality, and it makes Aloy’s fight to save the world feel more urgent. Once the water drains out of this space and Aloy has to fight off a contingent of amphibious robots, a new battlefield emerges with opportunities for parkour, sniping and sneaking on the ground. Water adds versatility to Forbidden West, not just terror.

Underwater gameplay is only a portion of Forbidden West, and most of the action plays out on land. This game is truly open world, with side quests, battles and interactive moments scattered around an expansive map. Aloy ends up at various villages and fortresses, where she’ll often find hunters, cooks, designers and weapons dealers to trade with, and a workbench to upgrade her equipment. Different outfits grant Aloy specific perks, while weapons and clothes can be infused with ability upgrades. Crafting and loadout customization are significant aspects of Forbidden West, and alongside the skill tree, these features put a generous amount of power in the player's hands, making each win taste even sweeter.

Two new tools stand out in Forbidden West for their fun factor alone: the Shieldwing and the Pullcaster. The Shieldwing is technically a glider, but in action it looks more like an illuminated umbrella, which is less hardcore but still perfectly effective. Whatever you call it, Aloy can use the Shieldwing to cover large gaps and leap from mountaintops, giving her more room to roam. The Pullcaster is a grappling hook that Aloy uses to open vents and snap to out-of-reach locations, and it’s especially helpful in the middle of intense fights against multiple machines. Both of these tools are reminiscent of The Legend of Zelda: Breath of the Wild, and they add a delicious layer of mobility and environmental puzzle-solving to Aloy’s journey.

Any area that looks climbable generally is, allowing Aloy to scale mountainsides and abandoned buildings with relative ease. Pressing R3 on the DualSense highlights areas that Aloy can grab onto in yellow, and there are usually multiple ways to reach the same destination.

This led to at least one instance where I got stuck – while hunting for valuables, I scaled an old tower and crouched through a suspiciously small crack in its façade. Inside, I found a crate and cracked it open, and then I tried to leave, only to find escape impossible. I jumped around for a few minutes before restarting from my last save, which thankfully wasn’t long before. Use those campfires, people.

My biggest glitch occurred in the middle of a big battle against a mammoth-like Tremortusk and its captors. Mid-combat, I activated my Valor Surge, a special ability tied to my skill tree choices, and instead of turning on camouflage, I entered a weird kind of developer view, where Aloy was invisible and I was able to fly around the battlefield, untethered. I eventually fixed this by selecting a new weapon, which brought Aloy back into view.

Given the sheer size and density of Forbidden West, these issues feel incredibly small, and they haven’t spoiled my positive perception of the game. I mean, I haven’t even talked about the Tallnecks yet – just like in Zero Dawn, I’m lowkey obsessed with these lanky loafs, and I will always detour to climb all over them. And override them, of course. The view from the top of that satellite head is worth it, every time.

There are plenty of new cyber-beasts in Forbidden West, including Tremortusks, an invisible bat called a Dreadwing, and massive cobras called Slitherfangs, and they’re all intimidating in their own special ways. Scanning enemies with the Focus reveals their weaknesses and strengths, including elemental damage possibilities and whether their weapons are detachable. My advice is to take fights slow and strategize, just like in Zero Dawn – use environmental traps whenever possible, take the time to investigate the machines before attacking, hide in the grass and Silent Strike when no one’s looking. And when that all flies out the window, Pullcast your way to safety.

Forbidden West is a triumph in many ways. Its world feels alive and packed with secrets, and the story advances swiftly as Aloy makes her way to the Pacific coast. Combat is frenzied, with an arsenal of elemental weapons at Aloy’s disposal and multiple ways to attack any situation. The environments range from flooded, neon-lit facilities to expansive deserts and thick jungles, complete with dynamic weather and time progression. The machines are as stunning as they are terrifying. And throughout it all, Aloy’s voice actor, Ashly Burch, tells an emotional, complex story of survival, collaboration and evolution, demonstrating incredible versatility along the way.

This is a game worth diving into, no matter how afraid of the water you are.