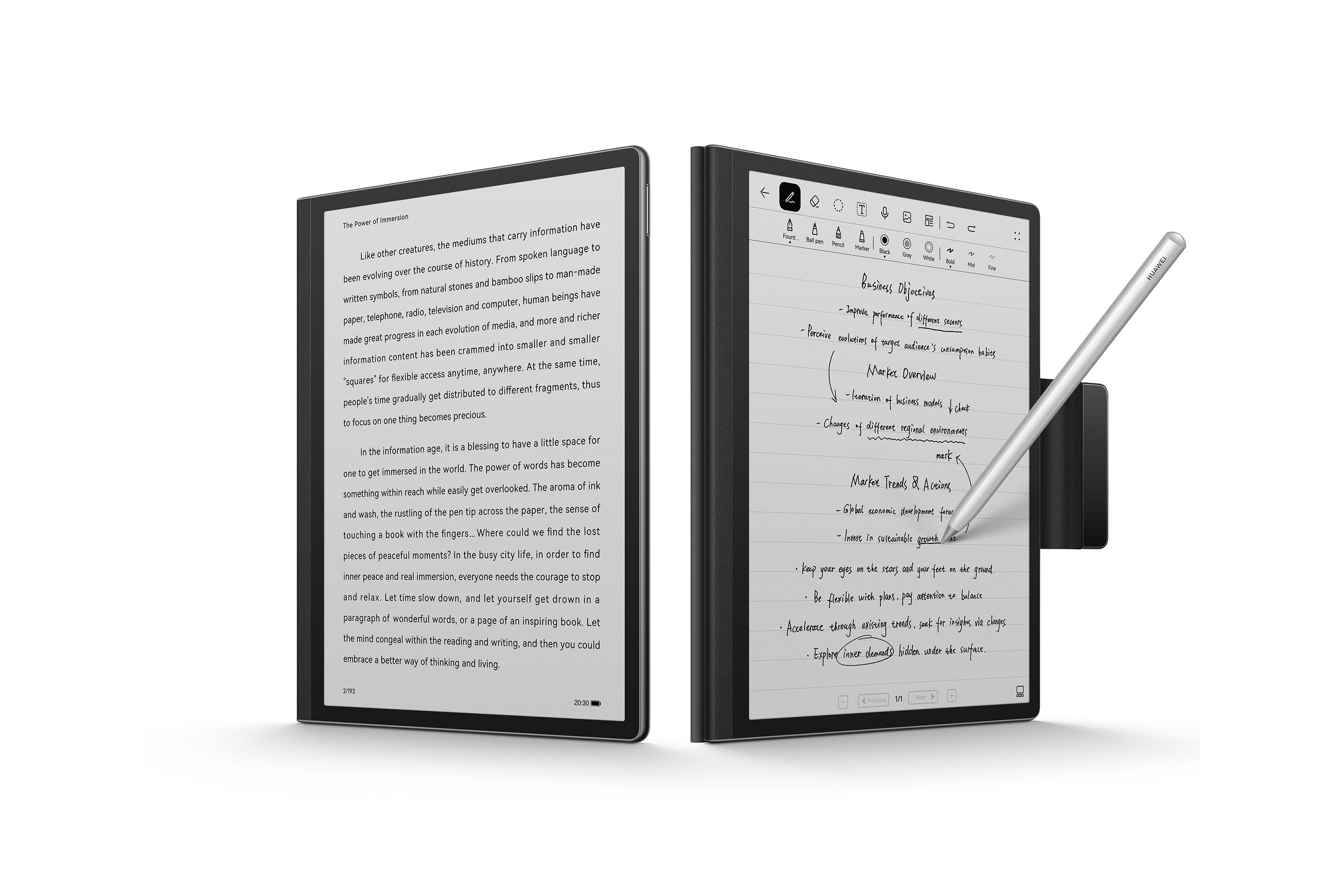 Huawei’s MatePad Paper is half e-reader, half tablet

And it works with the company’s stylus.

A lot of Engadget readers – and to be honest, Engadget editors – are obsessed with e-ink devices. Whether they’re productivity workhorses or digital canvases, the tech has slowly continued to inch beyond the one-handed e-readers of the last decade.

The latest addition is a substantially-sized e-ink tablet from Huawei. The MatePad Paper has a 10.3-inch grayscale screen with an anti-glare, reflective display to aid low-light use. The Paper can reproduce 256 shades of greyscale to display text and images – and even video — although I'm not sure why you'd want B&W video.

You probably already noticed it’s got surprisingly small bezels for an e-ink device. Huawei says it’s honed the tablet down to an 86.3 percent screen-to-body ratio, with a book spine-inspired design ensuring there's something for you to hold. All that e-paper, coupled with the size of the thing, sets it apart from most e-ink devices we’ve seen so far. (The Kindle DX was a long time ago.)

Alongside 32 levels of backlighting, the device is also compatible with Huawei’s M Pencil, which usually launches alongside its more typical tablets. This means you can scribble, annotate and edit your documents and books, which is a very useful tool when it comes to e-ink devices. Notably, Huawei has been able to refine the sensitivity of the textured screen to 26ms. It might not be quite as super smooth as an S22 Ultra – or even Huawei’s other tablets, but it's notable on a matte e-ink surface. Is this the perfect digital note-taking device?

Continuing Huawei’s push to connect all of its devices as seamlessly as possible, you can connect the MatePad Paper to the company’s laptops, PCs, tablets and phones. Huawei says the tablet will appear like a USB drive, and you can drag and drop your notes and annotated PDFs across to your laptop. This is possible thanks to the company's propriety operating system, HarmonyOS.

Huawei product announcements come with the usual proviso, however. The hardware is exciting – and tempting for anyone who works with lots of books, documents and digital paperwork — but you’ll be constrained by HarmonyOS.

The company says it's still growing out the ecosystem, but the onus remains on app creators and companies as to whether they’ll offer support. For example, There are a few ways I could check out my Kindle books on the MatePad Paper – maybe I could use the web-based reader? – but it won’t be as seamless as Amazon hardware. Then again, the MatePad Paper is also capable of more than a simple Kindle.

With M-Pencil and folio cover included, the MatePad Paper will cost €499 in Europe.