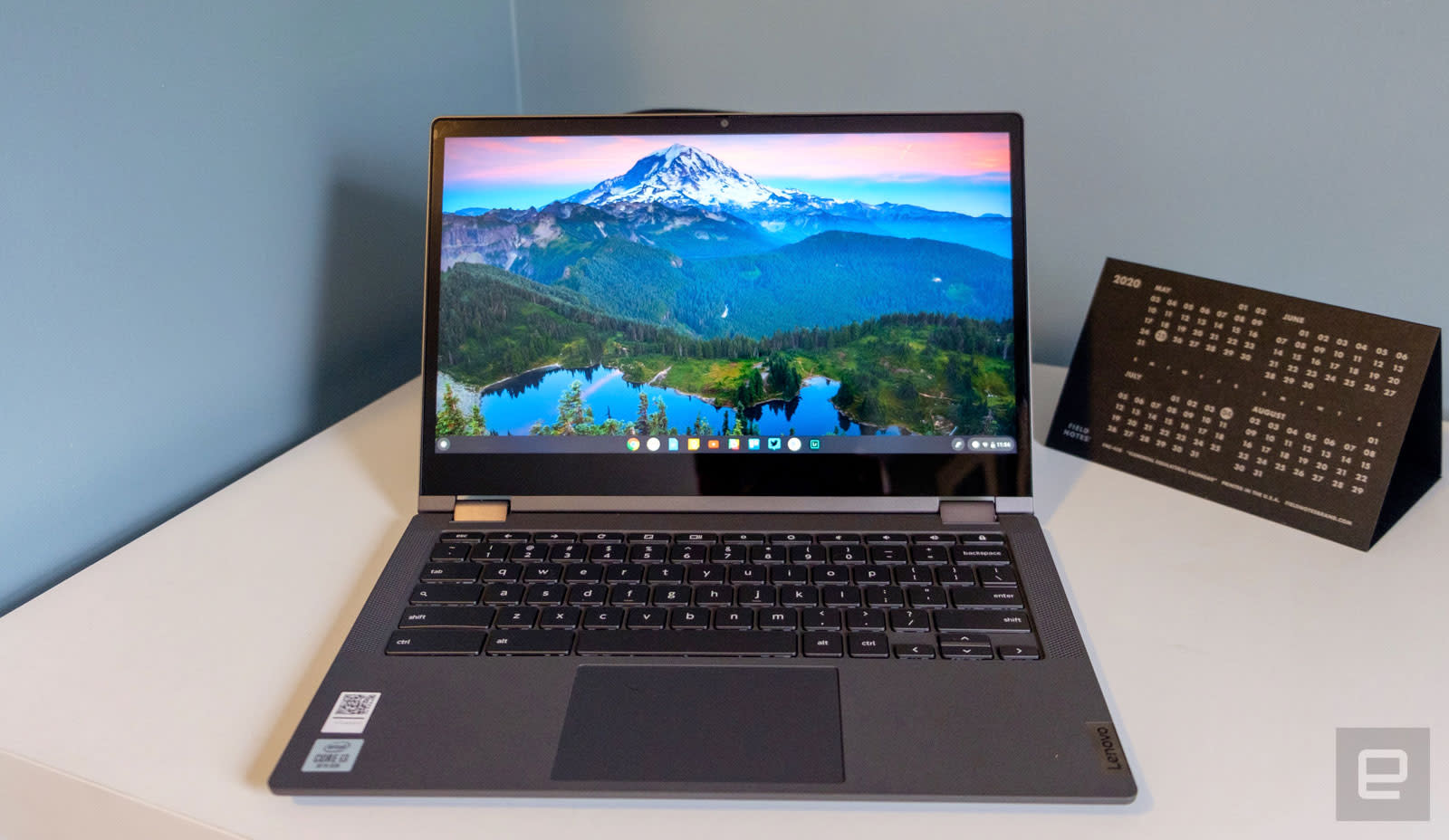 Chromebooks may have started out as inexpensive, cheaply-made laptops — but as they got more popular, manufacturers started making them more powerful, with better designs to match. Naturally, this sent prices up, and recently it’s been hard to find a Chromebook worth recommending that costs less than $500.

Enter Lenovo. The company’s Flex 5 Chromebook (from here on out the Flex 5) isn’t anything special on the surface. But digging a little deeper reveals what’s probably the best Chromebook for most people, and at $409 on Amazon (it’s not yet available directly from Lenovo) it’s a tremendous bargain for an everyday laptop.

As with so many Lenovo products, the Flex 5 is unassuming and understated. Closed, it’s your basic grey slab of a laptop, not too thin (.66 inches) or light (just under 3 pounds). The vibe is the same when you open it up. The 13.3-inch touchscreen has relatively small bezels on three of four sides, with a thick strip at the bottom and a webcam (complete with a physical slider to block it) up top.

The screen itself is pretty excellent for a computer in this price range. It doesn’t have the best viewing angles and reflections in bright light can be pretty harsh. But it’s relatively bright, colors and contrast make everything pop and the 1080p resolution is solid on a display this size.

The Flex 5 has a 360-degree hinge, so that screen can be flipped all the way around to use the device as a heavy tablet. You’ll find a volume rocker and power button on the side to make adjusting things easier when in tablet mode. There’s also a USB-C port on each side, a USB-A port, a headphone jack, and a microSD card slot. Nothing too exciting, but a standard USB port is always a good thing these days. 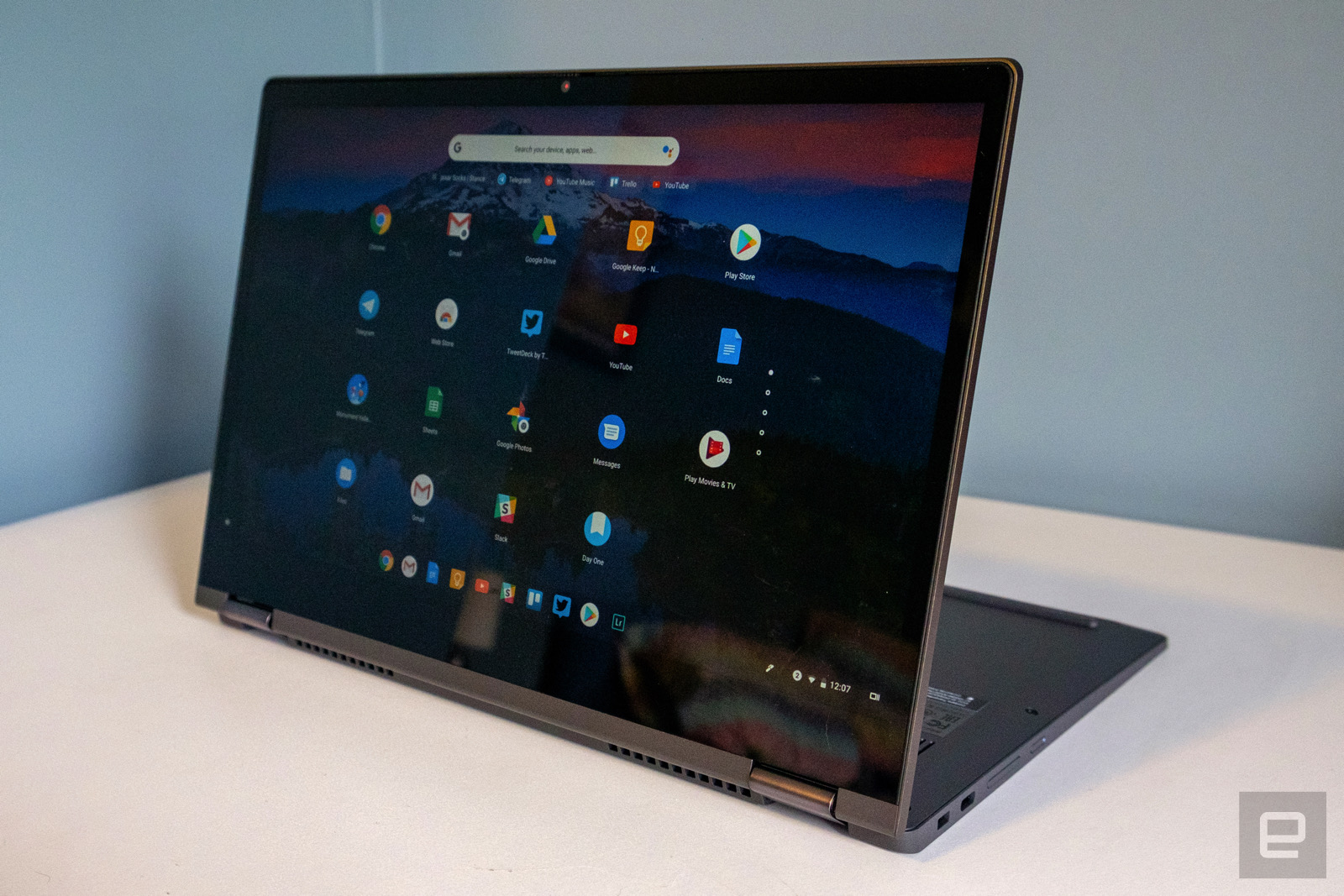 Lenovo has a reputation for excellent keyboards, and you won’t be compromising with the Flex 5 -- the backlit keys are nice and large with plenty of travel. Most of the Chromebooks I’ve reviewed lately have had excellent keyboards, but none of them have been as inexpensive as the Flex 5. Put simply, I can type on this computer all day long and not miss a beat. The trackpad is also big, comfortable, and had no trouble recognizing various clicks and swipes. A lot of Chromebook manufacturers build trackpads that are oddly short and wide, but this one has just a bit more vertical space, which makes a big difference.

Laptop speakers have gotten surprisingly good lately, but Lenovo isn’t pushing anything forward here. That’s ok, though. I don’t expect high-quality listening from laptop speakers. I just want to watch YouTube videos and hear my Slack pings, and these speakers are fine for that. Music sounds rather tinny, though you can crank the volume pretty high here if you need to. The fact that there’s no speaker on the bottom or sides means that the audio can get pretty muffled if you flip the screen around and watch a video in stand mode, however. 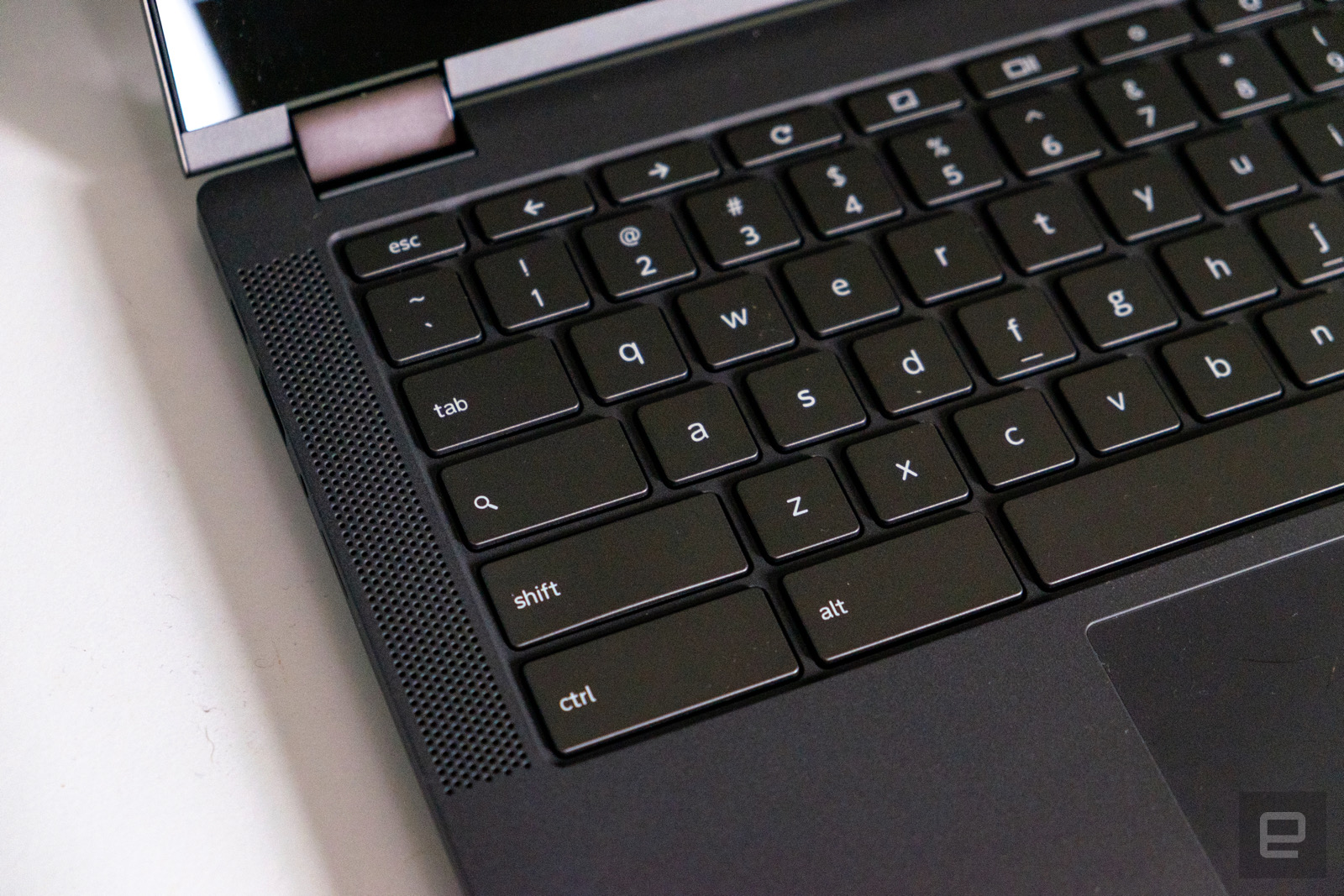 I was pleasantly surprised with the Flex 5 once I was logged in and putting it through my normal routine. Lenovo seems to have hit the sweet spot of specs and price, making a Chromebook that has nearly the same performance as more expensive models while keeping the price affordable. The combo of Intel’s 10th-generation Core i3 processor, 4GB of RAM and 64GB of storage is pretty modest, but it handled my work needs with no issues.

Generally, I run a few Chrome windows with anywhere from five to 15 tabs as well as dedicated web apps for Slack, YouTube Music or Spotify, Keep, Trello, Todoist, Hangouts and Tweetdeck. I also run the occasional Android app like Facebook Messenger or Adobe Lightroom. I was worried that 4GB of RAM wouldn’t cut it, but the worst I encountered was that tabs would occasionally refresh if I hadn’t looked at them recently. Otherwise, the overall experience was smooth and trouble-free.

I don’t particularly find flipping a laptop into tablet mode useful, but the feature makes some sense on the Flex 5, since Chromebooks can run touch-optimized Android apps. If you think you’ll put that 360-degree hinge to use, the Flex 5’s hinge is strong and flips around nicely. Lenovo has lots of experience making two-in-one devices like this, so I have few build quality concerns here.

The Flex 5 succeeds in another area: battery life. It’s not the best I’ve ever seen, but it did last just over eight hours in our test looping an HD movie with the screen set to 65 percent brightness. I got similar results going about my normal day, as well, so I think it’s safe to say you can expect eight hours unless you’re spending the entire day on Google Meet or Zoom calls. (Come to think of it, you might be doing that, so just find an outlet from time to time.) That’s not quite as good as the 10 hours that Lenovo rates it for, but it does outlast the ASUS Chromebook Flip C436 and Samsung’s Galaxy Chromebook, both of which are significantly more expensive.

It doesn’t last quite as long as Google’s Pixelbook Go, but given the Flex 5’s relatively low price, I have no issues with the battery. That said, there are some budget Windows laptops, like Acer’s Aspire 5 and Spin 3, that get similar battery life, so the Flex 5 isn’t exactly punching above its weight. It’s just better than multiple Chromebooks I’ve tested recently.

There’s not a lot else to say about how the Flex 5 works -- but that’s a good thing. It feels like any high-end Chromebook I’ve used in the last year, but without the high price tags that usually accompanies them. Put simply, the price to performance ratio here is excellent, not just for a Chromebook but for any laptop.

There aren’t a lot of Chromebooks that match Lenovo’s combination of specs and price. There are tons of cheap Chromebooks out there, but you are almost always trading design, power or display quality (or some combination of the three) to save money. Further complicating things is the fact that it’s hard to know which of the many variations offered by the biggest OEMs are available at any given time. You might see things listed on ASUS or Acer’s site (or Google’s own Chromebook page) that you can’t actually find for purchase.

That said, if you can find it, the ASUS Chromebook Flip C434 (pictured above) is worth a look. It’s currently available for $400 with an Intel M3 processor, 64GB of storage and 4GB of RAM. That processor isn’t as good as the one in the Flex 5, but the ASUS has an excellent, slightly larger display with very thin bezels. I reviewed that model in 2019, and it was one of the best Chromebooks out there; my main concern was the combo of 4GB of RAM and an M3 processor wasn’t powerful enough for the $579 ASUS was asking. However, given that it’s now priced at $400, it’s a much more reasonable option.

Another decent option is ASUS’s Chromebook C425. It doesn’t have the 360-degree hinge that the Flip and Lenovo’s Flex 5 do, but for $440 you’ll get twice as much storage. It also uses an M3 processor, so it’s not the fastest, but it should be fine for most basic tasks.

Right now, there is no Chromebook that I can recommend as easily as Lenovo’s Flex 5. It’s really quite simple: for $409, you get a laptop that works just as well as ones that cost hundreds of dollars more. You compromise a bit on storage and RAM, so power users who think they’ll need more should look elsewhere. But for anyone else, the Flex 5 is exactly the kind of Chromebook we should be seeing more of. Put simply, it’s a great everyday computer that can handle most modern, web-based tasks. Photoshop aficionados and video editors will continue to look elsewhere, but if you want a computer for basic tasks like browsing, word processing and watching videos that’s easy to use and simple to maintain, the Flex 5 is a great option.