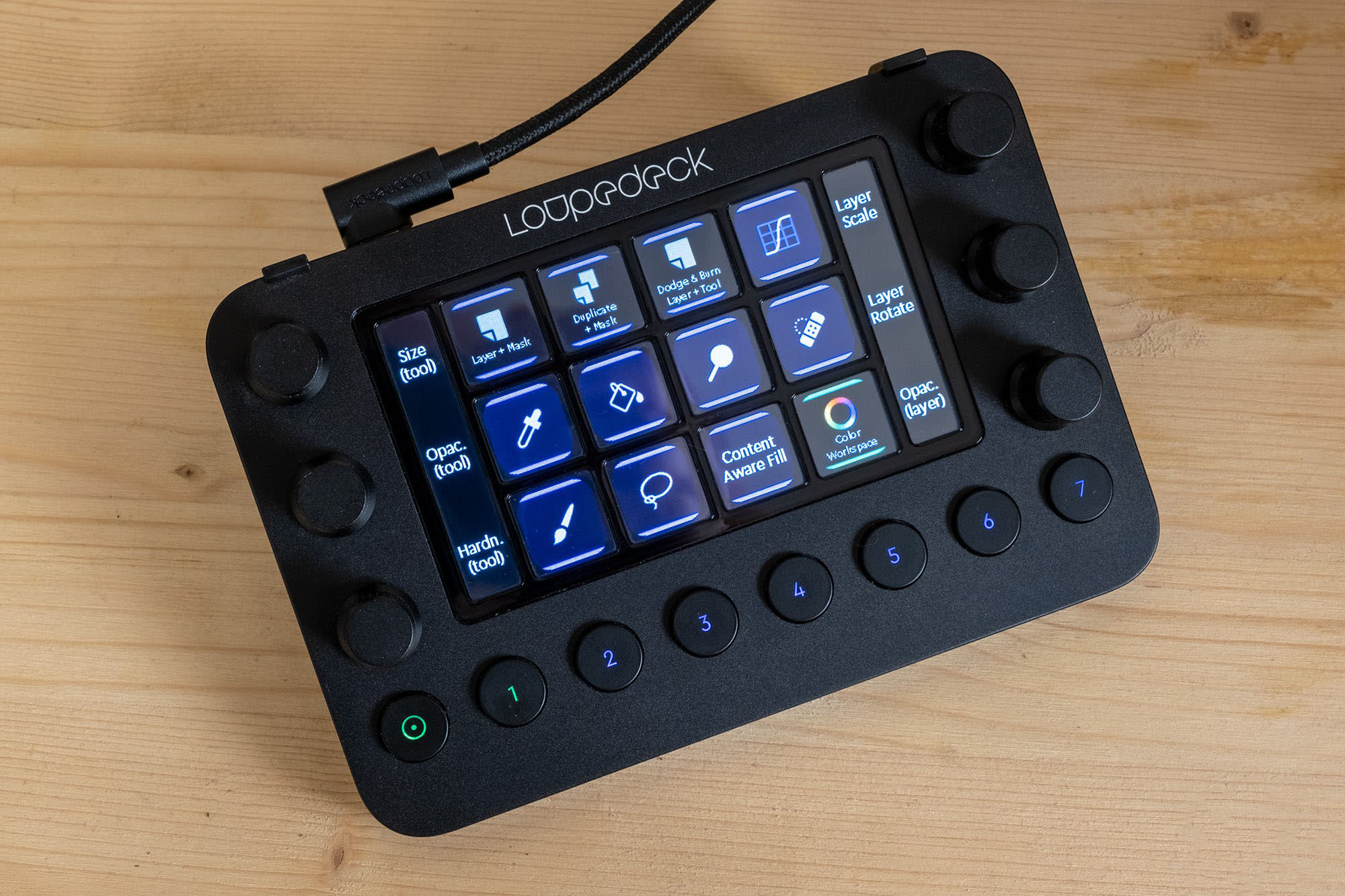 Loupedeck Live is a compelling alternative to Elgato's Stream Deck

More controls open up creative possibilities, if you have the patience.

Life’s too short to drag a mouse more than three inches or remember elaborate keyboard combinations to get things done. This is 2021 and you can have a pretty, dedicated button for almost any task if you want. And if you partake in anything creative, or like to stream, there’s a very good chance that you do. Loupedeck makes control surfaces with many such buttons with a particular focus on creatives. Its latest model is the “Live” ($245) and it’s pitched almost squarely against Elgato’s popular Stream Deck ($150). Both have their own strengths, and I’ve been using them side by side for some time now. But which one have I been reaching for the most? And does the Loupedeck Live do enough to command almost a hundred more dollars?

First, we should go into what the Loupedeck Live actually is and why it might be useful. In short, it’s a PC or Mac control surface covered in configurable buttons and dials. The buttons have mini LCD displays on them so you can easily see what each does with either text, an icon or even a photo. Behind the scenes is a companion app, which is where you’ll customize what each button or dial does. Many popular applications are natively supported (Windows, MacOS, Photoshop, OBS and many more). But if the software you use supports keyboard shortcuts, you can control it with the Live.

So far, so Stream Deck? Well, kinda. The two are undeniably very similar, but there are some important differences. For one, the Stream Deck’s only input type is a button; Live has rotary dials too. This makes Loupedeck’s offering much more appealing for tasks like controlling volume, scrolling through a list or scrubbing a video and so on. But there are also some UI differences that give them both a very different workflow, too.

Like Elgato, Loupedeck currently offers three different models. With the Stream Deck, the difference between versions is all about how many buttons there are (6, 15 and 32). The different Loupedecks are physically distinct and lend themselves to certain tasks. The Loupedeck CT, for example, has a girthy dial in the middle for those that work with video. The Loupedeck+ offers faders and transport controls and the Live is the smallest of the family with a focus on streaming and general creativity.

At a more superficial level, both the Stream Deck and the Live look pretty cool on your desk, which clearly is vitally important. Elgato decided to make its hardware with a fixed cable (until the MK.2), whereas Loupedecks have a removable USB-C connection. I wouldn’t normally bother to mention this, but it’s worth noting as that means you can use your own (longer/shorter) lead to avoid cable spaghetti. You can also unplug it and use it to charge something else if needed. Minor, but helpful functionality if your workspace is littered with things that need topping off on the reg like mine is.

Clearly, one of the main advantages with the Live will be those rotary dials. If you work with audio or image editing at all, they are going to be much more useful than a plain ol’ button for many tasks. For example, I wanted to set up some controls for stereo panning in Ableton Live. On the Stream Deck I need to employ two buttons to get the setup I wanted: pan left one step / pan right one step and it takes a lot of presses to move from one extreme to the other. With the Live, I can simply assign it to one of the rotaries (clicking it will reset to center). From there, I can dial in the exact amount of panning I want in one deft movement.

That’s a very simple example, but if you imagine using the Live with something like Photoshop for adjusting Levels, you can see how having several rotaries might suddenly become incredibly useful.

Another practical difference between these two devices is the action on the buttons. On the Stream Deck, each one is like a clear Jolly Rancher with a bright display behind it. The buttons have a satisfying “click” to them and are easy to find without really looking. The Live, on the other hand, feels more like someone placed a divider over a touchscreen. That’s to say, the buttons don’t have any action/movement at all, instead delivering somewhat less satisfying vibrations to let you know you’ve pressed them.

The real difference between these two, though, is the workflow. I had been using the Stream Deck for a couple of months before the Loupedeck Live. The Stream Deck is, at its core, a “launcher.” Assign a button to a task and it’ll do that task on demand. You can nest multiple tasks under folders to expand your options nearly endlessly, but the general interface remains fixed. So, if you wanted to control Ableton and Photoshop, for example, you might have a top-level button for each. That button would then link through to a subfolder of actions and/or more subfolders (one for editing, one for exporting actions and so on). These buttons remain fixed no matter what application you are using at a given moment.

With Loupedeck, it’s all about dynamic profiles. That’s to say, if I am working in Ableton, the Loupedeck will automatically switch to that profile and all the buttons and rotaries will change to whatever I have assigned them to for Ableton. If I then jump into Photoshop, all the controls will change to match that software, too. Or put another way, the Stream Deck is very “trigger” based (launch this, do this key command). The Loupedeck is more task-related, with pages, profiles and workspaces for whatever app is active. There is a way to associate profiles on the Stream Deck to a specific app, but it's a much more manual process.

The net result is, once you have things customized to just how you want them, the Loupedeck Live is much more adaptive to your workflow as it “follows” you around and has more breadth of actions available at any one time. But at first, I was trying to make it simply launch things and found that harder than it was on a Stream Deck until I figured out how to work with it.

This “dynamic” mode can also be turned off if you prefer to keep the same controls available to you at any one time, but for that you can also assign set custom “workspaces” to any of the seven circular buttons along the bottom — so if you want your Photoshop profile to open with the app, but also have some basic system/trigger controls available, they can just be one button push away.

This approach definitely makes the Loupedeck feel more tightly integrated to whatever you’re doing “right now” rather than a nifty launcher, but it also takes a bit to get your head around how it wants to do things. At least in my experience. With the Stream Deck I was able to get under its skin in a day, I am still reading up on what the Live can do after some weeks, and need to keep reminding myself how to make certain changes. As a reverse example, launching an app is something Stream Deck was born to do. With a Loupedeck, you have to create a custom action and then assign that to a profile you can access at any time (i.e. a custom workspace) or add that action to various different profiles where you want it to be available.

Both do offer the option for macros/multi-actions and work in very similar ways in that regard. If, say, you want to create a shortcut to resize and then save an image, you can do so with either by creating a list of actions to be carried out in order. You can add a delay between each step and include text entry, keyboard shortcuts and running apps — all of which allows you to cook up some pretty clever “recipes.” Sometimes it takes a bit of trial and error to get things right, but once you do it can simplify otherwise fairly lengthy/mundane tasks.

Where the Stream Deck takes things a little further is with third-party plug-ins. These are usually more complex than tasks you create yourself (and require some programming to create). But thanks to Elgato’s active community, there are already quite a few on offer and the number is growing every day. Some of them are simple: I can have a dynamic weather widget displayed on one of the keys, others are more practical — I use one that switches my audio output between my headphones and my PC’s built-in speakers. Some of my colleagues speak highly of a Spotify controller and the Hue lights integration — both of which came from the Stream Deck community.

Loupedeck offers a way to export (and thus share) profiles, but as far as I can tell right now, there’s no way to do anything more complex than what you can do with custom controls — if that were to change in the future that could really enhance the functionality considerably. Loupedeck has just revealed an SDK for developers, so we'll have to wait and see what the community comes up with in the future.

Beyond the hardware controls and the user interface, it’s worth mentioning that both the Live and the Stream Deck have native support for specific apps. “Native” means that the companion software already has a list of drop and drag controls for select apps. Elgato’s controller, unsurprisingly, has a strong focus on things like OBS/Streamlabs, Twitch and, of course, the company’s own game capture software and lights along with some social tools and audio/soundboard features (for intro music or effects).

The Loupedeck Live also offers native controls for OBS/Streamlabs (there's a plugin for Twitch) but tends to skew toward things like After Effects, Audition, Premier Pro and so on. The list of native apps supported is actually quite extensive and many more (like Davinci or iZotope RX) are available to download. If streaming is your main thing, Elgato’s solution is affordable and definitely more streamlined for that. The Loupedeck, however, is going to be more useful for a lot of other things — it’ll help with streaming, but also help you design the logo for your channel.

At this point, you can probably guess what the wrap-up is. Elgato’s Stream Deck offers less functionality overall but that can be greatly expanded as the number of plugins continues to grow. But likewise, it’ll always be somewhat limited by its singular input method (buttons). The Loupedeck Live is much more ambitious, but with that, trades off some of the simplicity. If you were looking for something that can take care of simple tasks and skews toward gaming or podcasting, save yourself the $100 and go with a Stream Deck, but if you want something that can pick up the slack for multiple desktop apps and tools, you probably want to pat your pockets a little more for the Loupedeck Live.

This article has been updated on 8/18/21 for clarity on some features.