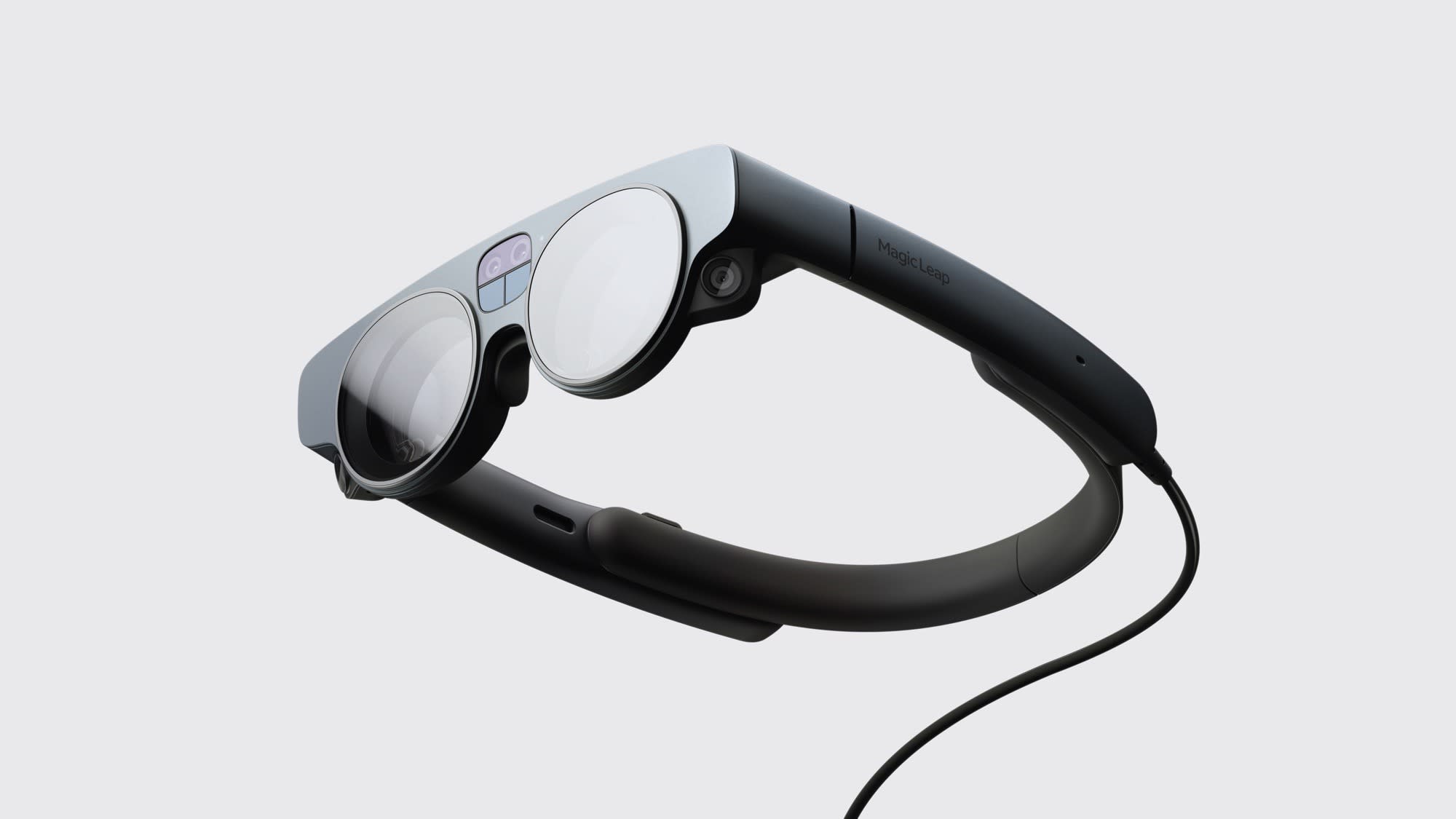 Magic Leap 2 is the best AR headset yet, but will an enterprise focus save the company?

The headset has custom AR projection with the unique ability to go dark.

Magic Leap's glasses were supposed to lead us into the augmented reality era, a world beyond screens where we could interact with digital objects as if they were standing right next to us. Too bad they failed spectacularly. By early 2020, the company had raised nearly $2 billion. But aside from a few flashy demos and wild art projects, there wasn't much of a reason for its target audience of developers and creators to buy a $2,295 headset. Like Google Glass before it, Magic Leap felt like a false start for AR, a solution to a problem that didn't exist.

But the company isn't dead yet. With a new CEO onboard — former Microsoft executive Peggy Johnson — it's aiming for something far more practical: AR for the enterprise. That may seem like a retread of the HoloLens playbook, which has focused on business customers for years, but Magic Leap has a shot at giving Microsoft some serious competition with its second-generation AR glasses.

The $3,299 Magic Leap 2 (ML2), which launched in September, is easier to wear, far more powerful and it offers a dramatically larger (and taller) AR field of view than any headset we've seen before. It has the unique ability to dim its display, allowing you to block out light and focus more on virtual objects. And it should be easier for developers to work with, thanks to a new Android-based OS. While it's still unclear if the company's new business plan will pay off, ML2 is still a significant achievement, especially now that Meta is also pushing into similar AR-like territory with the $1,500 Quest Pro.

In a Twitter chat with Engadget, Magic Leap's founder and former CEO, Rony Abovitz, said the company was always taking a dual-pronged approach to consumers and enterprise customers. He also noted that the new headset was being developed with an enterprise focus before the launch of the Magic Leap 1 Creator Edition in 2018. While Abovitz wouldn't divulge specific sales numbers, he claims that the damning sales report about the company selling only 6,000 headsets was also completely "made-up."

"It's been a long struggle," Magic Leap SVP and head of hardware Kevin Curtis said in an interview with Engadget. "When we came out of ML1, we learned a tremendous amount... Not just technically, but also from a market point of view. So that really was used to set the goals for ML2."

Some of those goals seemed impossible at the time. The company wanted to double the field of view (FOV) — the amount of screen area where you can actually see AR objects — as well cut the device's volume in half. Those moves would make its sequel headset even more immersive, while also being more comfortable for extended wear. According to Curtis, bumping up the field of view from 50 degrees to 70 degrees with ML1's projector and eyepiece technology would have required wearing something as large as an open hand. That's not exactly doable all day.

Magic Leap spent years exploring existing forms of projection, including laser-scan based systems, uLED arrays and LCoS (liquid crystal on silicon), but found them all lacking. Instead, it developed its own custom architecture, which uses LCoS together with LED RGB light modules and a complex system of concentrators and polarizers to bring images to your eyes. That works together with a new eyepiece design to achieve its lofty 70 degree field of view.

But what does that actually mean? The Magic Leap 1 headset featured a FOV of 50 degrees, which made it seem as if you were viewing AR through a car's cramped rear window. (That was comparable to HoloLens 2's 52 degrees of viewing.) With Magic Leap 2, the company hit a 70 degree FOV by increasing the vertical viewing area, allowing you to see taller objects without moving your head up and down. During my brief demo, it felt more like standing in front of an open doorway.

That's more akin to how you view things in real life, according to Curtis, and it goes a long way towards convincing you the AR objects you're seeing are real. I've tried a wide variety of headsets over the years (including the defunct entry from the startup Meta, which existed long before Facebook's name change), and the Magic Leap 2 is the first one that's delivered a genuine sense of presence. Whether I was viewing a large piece of medical equipment, or an expansive 3D model of downtown San Diego, I had to try hard to see the edges. It was almost aggressively immersive.

The new projection technology also helped Magic Leap achieve its goal of reducing ML2's volume by more than half, leading to a 20 percent weight drop (it clocks in at just 260 grams, slightly more than half a pound). The result is a pair of AR glasses that feel more like, well, glasses. While the original headset looked like a pair of enormous ski goggles, ML2 has flatter lenses and slimmer arms, making you seem less like a bug-eyed dork and more like an engineer or surgeon gearing up for a big project. (It's no wonder Magic Leap gave health startups a headstart with access to its new hardware and software.)

All of this custom development will also help Magic Leap deliver better headsets down the line. The company claims its eventual Magic Leap 3 glasses, which have no release date yet, will lose another 50 percent in volume and deliver a larger field of view. The technology can potentially be scaled beyond 80 degrees, allowing you to view a building-sized object unencumbered by any AR boundaries.

As I started demoing the Magic Leap 2 in a brightly lit hotel meeting room, it was mostly what I expected: A more comfortable and higher quality version of its predecessor. But at one point, I hit a button and the screen started to go dark, as if a shadowy cloud was blotting out the sickly fluorescent lights above me. I had flipped on the headset's global dimmer, which darkens the real world to better highlight virtual objects. The result is an almost VR-like experience. The virtual map I was viewing, which showed how first responders were dealing with wildfires in Colorado, all of a sudden looked sharper and more colorful. I wasn't distracted by the boring meeting desk in front of me, or the occasional bystander walking by.

Every AR solution adds light, Curtis explained, what's unique about ML2 is that it's able to add the color black. The dimmer module is another display that sits in front of the headset's eyepiece, allowing it to reduce light across the entire screen, or into specific areas, by a factor of 100. That'll let you use ML2 in brightly lit rooms, or even outside on a sunny day, without making the AR images seem washed out. Developers can also use the dimmer to add shadows to their objects, giving you an added layer of depth in AR.

As Magic Leap was working on making AR more VR-like, Meta was also doubling down on bringing the real world into VR with the Quest Pro. Thanks to new cameras and upgraded hardware, Meta is pitching that headset as a way to bring VR elements into your typical workflow (just imagine viewing VR windows dancing above your laptop's screen). Based on my time with the Quest Pro so far, that's not something I'd actually want much of. The cameras just aren't good enough yet. But it's funny to see Meta tackling a similar problem as Magic Leap from another angle. Somewhere between these two headsets is the ideal balance between the immersion of VR, and the real world integration of AR.

I was so distracted by Magic Leap 2's expanded field of view and dimming capabilities, I barely noticed that its controller felt more ergonomic. And I didn't think much of the headset's computing pack, which can now be worn across your body like a messenger bag. Naturally, it has faster hardware inside (specifically, a quad-core AMD Zen 2 processor and RDNA 2 graphics). But my main takeaway, after years of AR and VR testing, and the seemingly endless drumbeat of metaverse hype from an increasingly desperate Mark Zuckerberg, is that it’s nice to be genuinely surprised by a new headset.

But of course, tech alone won't make a successful product. Magic Leap isn't targeting ML2 towards consumers at all, instead it's being pitched to doctors who may want a bit of AR assistance during surgery, or engineers who would like to pull up schematics when they're standing in front of complex machinery.

"I think it's improved a lot, [Magic Leap is a] different company," said Chief Marketing Officer Daniel Diez, when I asked about the state of Magic Leap today. Amid dismal sales of its first headset, and increasingly dire financials, founder and CEO Rony Abovitz left in 2020. But now, thanks to more than $1 billion in additional funding and a new leader in Peggy Johnson, it has another shot at the AR market.

At the very least, it’s clear the metaverse isn’t a problem Meta can solve on its own. Magic Leap is one of the few established competitors out there, making it a company that’s still worth watching. And if the enterprise play doesn’t work out, there’s a chance a large company like Google (one of its original investors) may have some use for all of this AR tech.

"Magic Leap One, Creator Edition was aiming at developers and partners — to let them explore many uses cases and markets — so that we would get feedback and have data to support which markets would grow faster and sooner," Abovitz told Engadget over Twitter, while also claiming it was wrong to call the earlier headset a failure. "It succeeded very well at that — which was its mission. It was our Mercury, ML2 is Gemini, and hopefully Peggy will launch the Apollo one day :)."

All products recommended by Engadget are selected by our editorial team, independent of our parent company. Some of our stories include affiliate links. If you buy something through one of these links, we may earn an affiliate commission. All prices are correct at the time of publishing.
View All Comments
Magic Leap 2 is the best AR headset yet, but will an enterprise focus save the company?