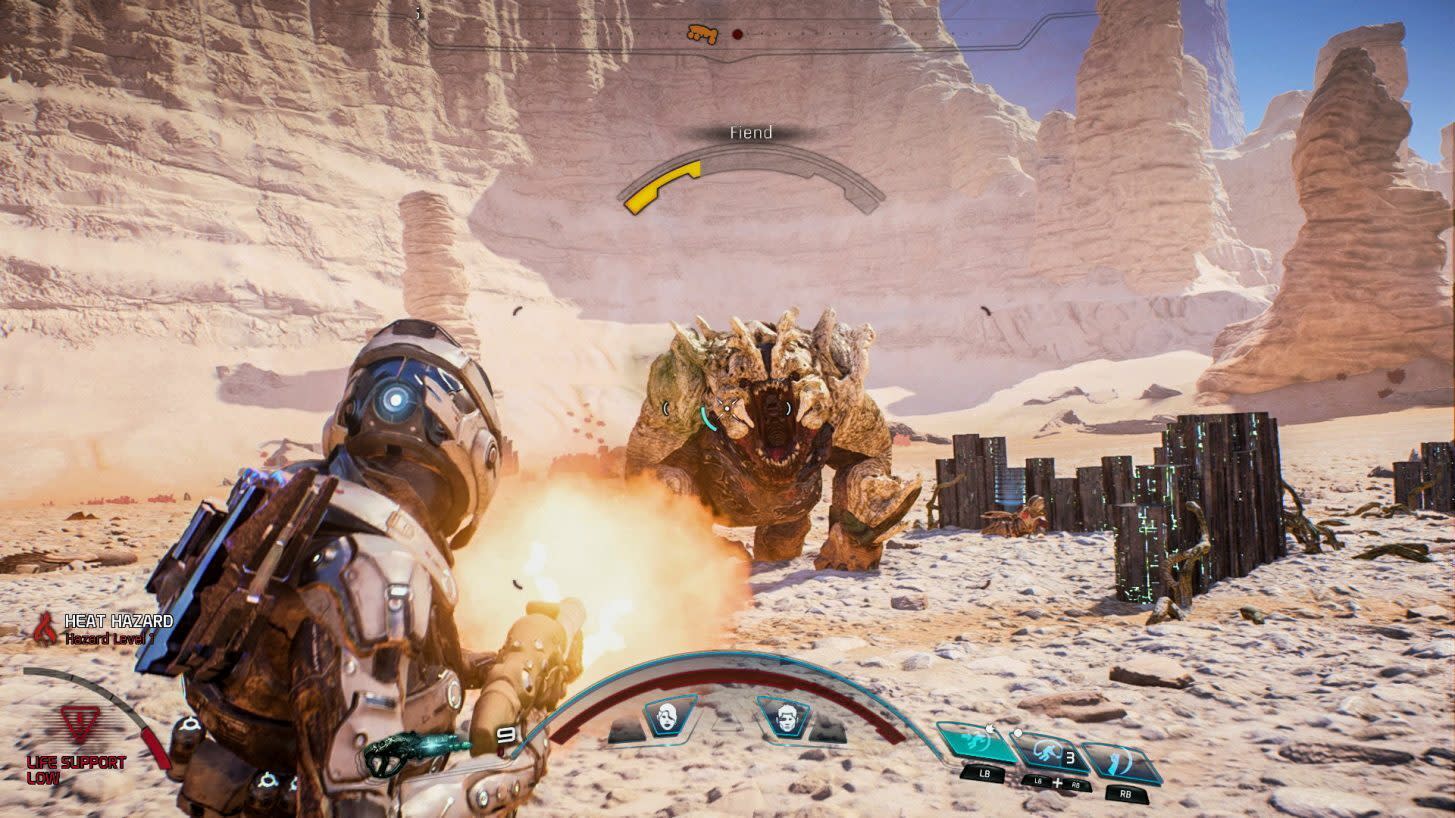 It's not awful, it's just not the original 'Mass Effect' series.

I can’t wait for the high-definition Mass Effect trilogy. I’m so excited, in fact, that I caved and tried to play Mass Effect Andromeda, a game I intentionally avoided at launch. It wasn’t due to the wobbly-faced gifs, though that didn’t help but more because of the collective ‘meh’ it elicited from everyone who’d played (including my colleagues).

When I went to grab the game a few weeks back, I realized that I’d already bought it — two years ago. I picked up Mass Effect Andromeda: Deluxe Recruit Edition in 2019, for under ten bucks, direct from the PSN store. (If you want an easy sign that a game didn’t do well, check how quickly that online price drops.) But I still hadn’t played it. I think I was coming off a run of lengthy games and wasn’t up for the time investment, especially with a game that might ruin a series for me.

But living alone during this pandemic has given me ample (read: too much) time to play through my gaming backlog, and it was now time to explore Andromeda.

Now I’ve finished exploring, and I realize it’s not a bad game. It’s just not good enough for anyone that loved the series. Quality varied hugely through the game. Some planets and sections seemed lovingly designed and planned out, while others seemed like one-note areas with a random environmental hazard. (Don’t get me started on all repetitive parts that seem to pad out half the game, like the ‘remnant’ temple structures you need to activate to settle your pioneers.)

I could just tell when a planet was given more love and attention than others. The first one was Elaaden, the Andromeda-based home to the warlike Krogans, a desert wasteland with huge pits, squishy bugs, scavengers, and a surface temperature that wasn’t geared towards human biology. Side quests on here had a wild-west flavor, with new political twists, and touch on your relationship building with your Krogan squad member, and the mystery behind what went wrong on the Nexus, the collective space base for all the species that made the trip to Andromeda.

Without spoiling anything. the final location, too, looks utterly gorgeous, with luscious plant life, space battles overhead and a hectic race that rushes you through the entire thing. I later discovered that couldn’t return to this location to explore in the post-game section. What a waste.

Other planets and locations are typically smaller than Elaaden, and the same critique could be leveled at most parts of the original games, which didn’t have the raw power to render bigger areas.

But it’s these bigger areas that tap into what was new with Andromeda: exploration. It doesn’t surprise me that Bioware had planned to focus on exploration with this game, building on the narrative and action base refined in the first three titles. (Kotaku published a great deep-dive on its troubled development.)

I loved touching down on a planet, with a map, some landmarks and little clue of where to go next. I’d hop into my galactic 4X4 vehicle and dash into the unknown. The unknowns were sometimes giant acid lakes that killed me immediately, giant chasms that I plummeted into, or hidden-away memory triggers that offered me a vignette of my dead dad’s life — if I was willing to head back to the Nexus base and chat to my AI buddy.

The latter was an entire sub-quest in and of itself, dragging you across the galaxy to sniff out these memory prompts. It was a laborious quest, but I was coaxed along by hints that it would lead me to the real story of why a chunk of the Milky Way decided to take its chances on the other side of space. If you didn’t chase those memory triggers, you’d beat the big bad space emperor at the end of the game, and still be clueless as to exactly why you’re in Andromeda.

Compared to the original games, there is more to do. Sadly, a lot of it repetitive fetch quests and tagging locations. But there was a moment, in the middle of the game, where I changed tack. Instead of tackling the game like a chore list, I went where I wanted to, or where I felt my protagonist, a ginger-haired Ryder sibling, should go. I truly felt like I was exploring. I didn’t have to soak up all the points of interesting filler quests, less destroying enemies’ bases or finding corpses hidden in water.

Nope, let’s find that Asarian general and find their ark! Let’s be a hero! Let’s get drunk with a sleazy Han Solo knock-off who’s definitely hiding something, and then make-out with him anyway.

For those moments, the game was fun. It just needed more of these, and less repetition. Andromeda’s new squad of characters was a mixed bag, but if you’d played the old games, recruiting a very casual, blase Asarian, or a Krogan that seems to understand the value of life, shakes up the cliches established for these alien species. I can’t compare them to the original trilogy’s roster, which had the chance to develop across the span of three games (and pretty much half a decade).

Mass Effect Andromeda also lacked lots of alien species from the game’s history, and only really added two new types of alien in the game, which seemed kind of cheap. Any hope of seeing a Quarian or a Drell in Andromeda was dashed when DLC was officially canned.I can read a book about them, but I’m not going to.

The game did what I wanted it to: get me excited to replay the series in higher resolution, and make some different, probably terrible, decisions, and see how they play out across the three games. Hopefully, the consequences of my decisions in Andromeda will play out in the next Mass Effect game, whenever that eventually arrives.