Dual-screen devices have always been held back by their software. From the Kyocera Echo and the Samsung Henessy, to the ZTE Axon M and Lenovo’s Yoga Book, companies have come close to delivering a physical design that might work. But in the real-world, these multi-display devices have failed to deliver. They’ve typically run a tweaked version of Android that has been woefully inadequate at making use of bigger screens, not to mention extra panels. Yet, Microsoft chose Android 10 to power its dual-screen debut, the Surface Duo.

On paper, this is an intriguing union. Microsoft is known for its powerful apps like Excel, PowerPoint and Word -- more than half of businesses in the world use Office software. But Windows hasn’t found a footing in the smartphone world, with failures like Windows Phone and Windows Mobile haunting Microsoft.

Meanwhile, Android is used on more than 2.5 billion devices worldwide. But Google has struggled with making the system work for tablets and 2-in-1s.

The Surface Duo is our first look at the result of these two companies collaborating, and it gives me hope for future dual-screen phones. The software here is “the Microsoft you love and the Android you know,” Microsoft’s chief product officer Panos Panay said in a press briefing. “We built it for people who love Microsoft Office, Teams, Outlook,” he said. “But it's also for those who use Android apps or mobile apps in general.”

The first thing you’ll see when using the Surface Duo is its home page, which looks almost exactly like any other Android home screen, except for a Windows-esque taskbar at the bottom. You can pin your favorite apps here, similar to Android’s bottom row of apps. Microsoft’s skin here also features square icons and lots of straight lines that are more reminiscent of Windows Mobile than Google’s Material UI. This is all familiar -- the Surface Duo is an Android phone at heart that’s wearing Microsoft clothes.

But dual screens are still uncommon, and Google and its partners have struggled to make Android work well on these types of phones in the past. With Microsoft’s help, the Duo offers a refined take on familiar features like “Book” mode for reading and “Tent” for presentations. You can also make an app stretch across two screens (a mode Microsoft is calling “Span”), or have a link that you tap in one window open in the other screen. 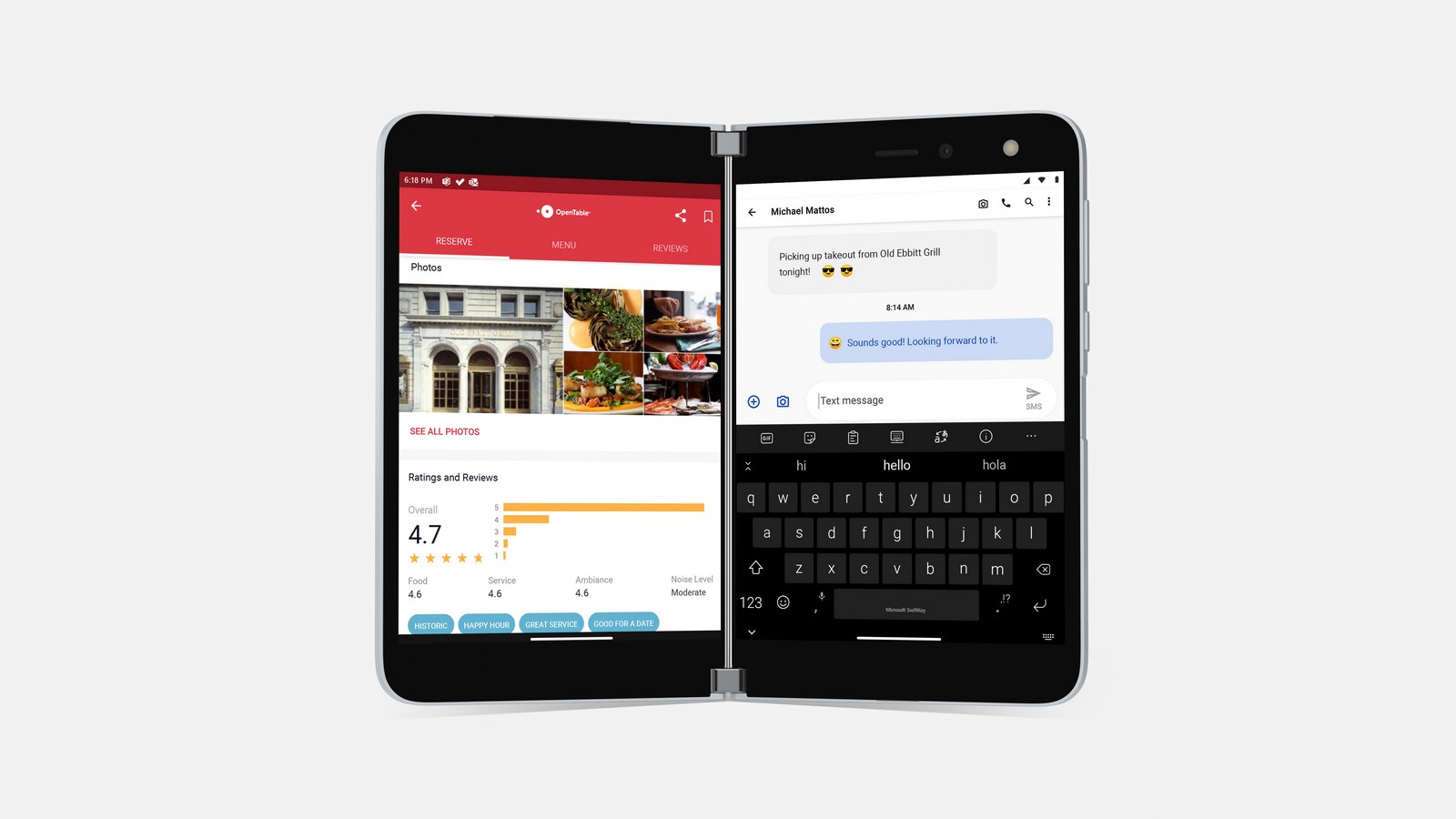 These features aren’t new, but Microsoft offers some fresh tweaks, like a keyboard that appears only on the screen where you tapped the input field and is aligned to the respective bezel, making the letters easier to reach. Another addition is something Microsoft calls App Groups that lets you pair apps to launch in each screen at the same time. And of course, its own Office apps take advantage of the various modes as well. When you have the company’s To Do app and Edge browser open side by side, for example, you can drag and drop text between the windows.

These are ideas we’ve seen or heard about on dual-screen devices for years, and it seems like with the Duo they might finally be coming to a phone that people would actually want to use. This software won’t be exclusive to the Surface device, either. “We didn't create them just for Duo, we created them in the Android code base,” Panay said. This means that the features Microsoft and Google worked to build could also roll out to any other company’s dual-screen phone that uses Android in the future.

It’s still unclear which pieces of what Microsoft calls the Duo UI are built into the Android code base and which will remain specifically for Microsoft, but Panay said the collaboration with Android chief Hiroshi Lockheimer was “very deep.”

“We really do want Android to continue to adopt these pieces and kind of light up the best Microsoft experiences,” he said. It won’t just be Microsoft that benefits from the collaboration, either. Google and its partners with dual-screen ambitions stand to gain too.

But Android offers a compelling advantage to Microsoft. When asked why the company chose to go with Android as the Duo’s operating system, Panay simply replied “Apps.” He added, “Mobile apps. Having the Play Store is critical.” The multitude of apps available via Google’s store will all work on both of the Duo’s screens, Panay said, and developers won’t have to do extra work to take advantage of some of the basic new interface features. “In the APIs we created, you can do more magic if you're a developer,” he added, pointing to Amazon’s Kindle and Spotify as some third-party options that have tweaked their apps for the Duo.

That’s good news, since not all developers want or can afford to do extra work for a platform that isn’t proven. The lack of apps that properly make use of dual-screens has been a major obstacle in the category succeeding. Apps are also a huge part of making an OS enticing to users.

Microsoft needs to reach a wide audience for the Duo to succeed, and if it were to rely only on its own apps, it risks sending the message that this is a business-first product. With Android and the vast number of apps that welcomes into the fold, Microsoft is astutely positioning the Duo as a lifestyle gadget that has the productivity chops to handle work when you need it to. As foldable phones start to gain traction, dual-screen devices like the Duo could ride those tailwinds to find mainstream success at last -- this time backed by software that finally looks ready to roll.

All products recommended by Engadget are selected by our editorial team, independent of our parent company. Some of our stories include affiliate links. If you buy something through one of these links, we may earn an affiliate commission. All prices are correct at the time of publishing.
View All Comments
Android-plus-Windows could be just what dual-screen devices need