We had an inkling that the Surface Duo would be coming soon, and — after letting things slip a little early — Microsoft just confirmed it. The dual-screen Android phone is officially arriving on September 10th, with a starting price of $1,399. Pre-orders begin today. It’s rare to see a long-awaited device released earlier than expected, but it makes sense why Microsoft might be rushing things: It’s aiming to launch right in the middle of peak iPhone season. Last year’s iPhone 11 launch event was also on September 10th, which is also close to previous debuts.

To recap, the Surface Duo features two screens connected by a 360-degree hinge. It's meant to be an adaptable device: You can fold it up to use it like a normal smartphone, hold it open like a booklet (similar to Microsoft's long-lost Courier project), or splay the two screens open like a tablet. And yes, you can even use one screen as a stand to prop it up on a table. Microsoft is taking the same approach with the slightly larger Surface Neo, a portable PC that'll run Windows apps (and is reportedly delayed until next year). But the Duo is the potentially more interesting device, since it marks Microsoft's return to smartphone hardware after Windows Phone fizzled so spectacularly.

The Surface Duo features Qualcomm’s Snapdragon 855 processor, 6GB of RAM and starts with 128GB of storage (you can get a 256GB model for $1,500). Its two 5.6-inch AMOLED screens sport a resolution of 1,800 x 1,350 each — together they form a 8.1-inch display (with a hinge in the middle, of course). Microsoft says it’s the thinnest Surface device yet, measuring 4.8 millimeters when it's opened. At 0.55 pounds (250 grams), it's a touch heavier than the iPhone 11 Pro Max. But really, what else did you expect from a device that's wrapped in Gorilla Glass around two screens?

As Panos Panay, Microsoft's Chief Product Officer, demonstrated the Surface Duo in a media briefing, it was difficult to tell if the hardware changed much since it's debut last October. The software, on the other hand, seems far more polished for multi-tasking than any dual-screen or folding phone we've seen yet. If you're following a link from a text message or email, it'll pop open in a web browser on the other screen, so you won't be distracted. You can pair apps to open up together from together Android launcher (Panay says Microsoft CEO Satya Nadella is regularly using the Kindle app alongside a note-taking program).

You can also drag over content easily between the screens — in the demo, Panay pulled over recipe ingredients from a website that instantly transformed into a bullet list in Microsoft's To Do app. That's something that would involve copying text, swapping apps, and pasting on a normal smartphone. Microsoft is clearly banking on the need for better multi-tasking in phones. Who wouldn't want an extra screen to browse the web without leaving a video call? Wouldn't email be easier to deal with if you could view all of your messages in one window, while reading them in another? 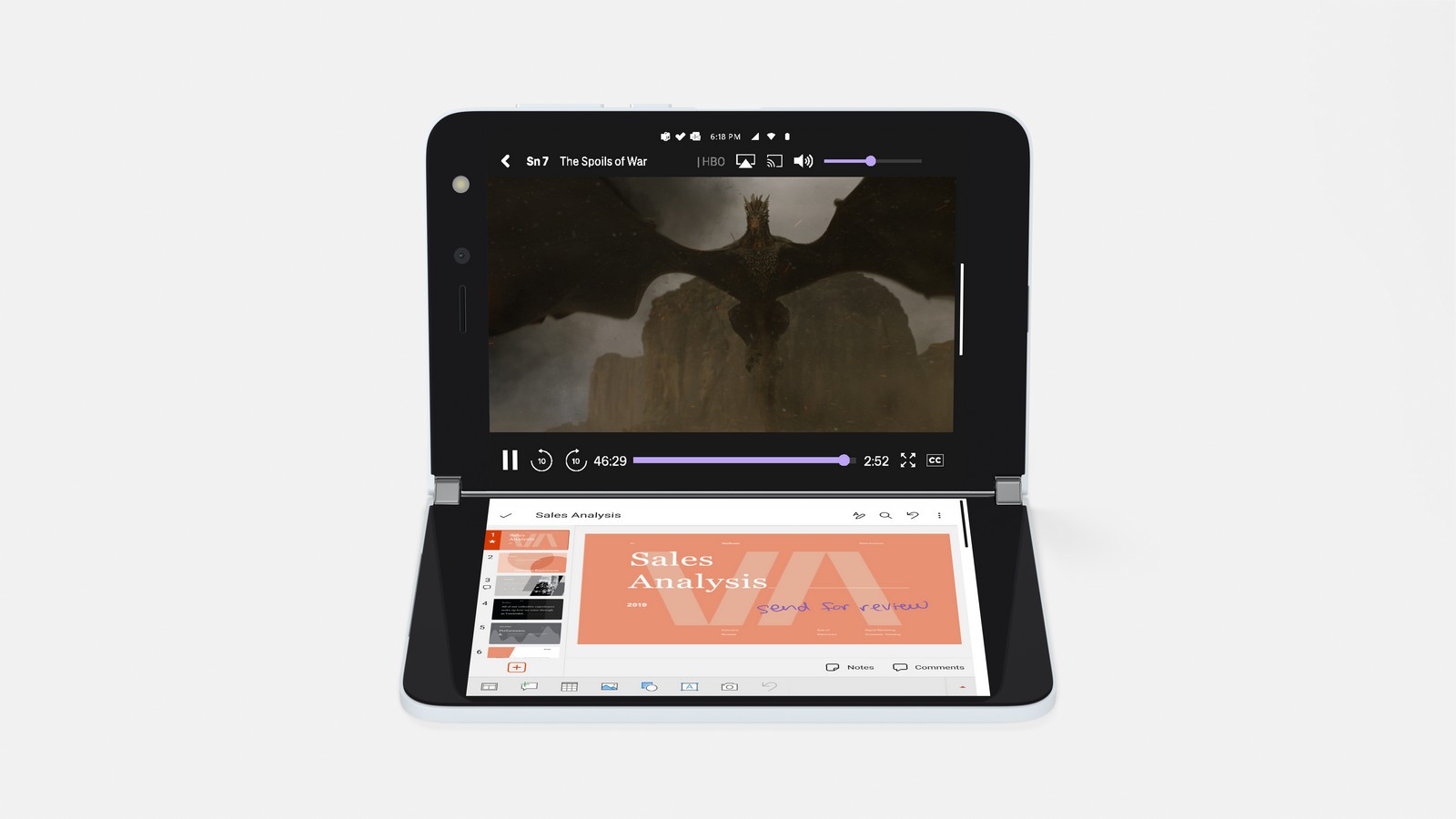 Still, as intrigued as I am, I can already see a few potential issues with the Surface Duo. For one, typing might be a bit annoying in certain orientations. If you click a text field on the left screen in booklet mode, you'll get a one-handed keyboard that's aligned to your left thumb. That seems like a good idea, but I can't imagine typing much with a single finger, and it seems too awkward to lean over with your right hand. Instead, you'll have to flip the Duo around into landscape mode to get a large keyboard suitable for both thumbs. You can also use any Surface Pen to jot down notes, but that's something you'll have to buy separately and carry around in your pocket, since there's no way to attach it to the Duo.

Microsoft is also going directly against the multi-camera smartphone trend. The Surface Duo just has a single 11-megapixel shooter located above its right screen. It looks a typical front-facing lens — to use it as a rear camera, you just have to fold the screen back. While Microsoft says the Duo has a portrait mode and can shoot multi-frame HDR photos, that's all software based. It won't be able to take advantage of different lens lengths like other premium smartphones. There's no mention of any night shooting mode either, so you can likely forget about decent low-light performance. While Microsoft could still end up surprising us with the camera, the specs don't give me much hope.

The Surface Duo might also seem a bit quaint now that Samsung has unveiled the Galaxy Z Fold 2, its third attempt at making flexible phones work. But Panay, ever the company man, thinks there's a very clear reason why Microsoft opted to build devices with two separate, hinge-connected displays. "I do believe in windows," he said. "I believe in windowing." The company has found that users multi-task differently when they can organize their work across two separate displays, instead of a single screen. And of course, it also helps that the Duo is much cheaper than the original Galaxy Z Fold, which cost well over $2,000 (we still don't know the pricing of the Z Fold 2). The $1,380 Galaxy Z Flip is a bit more reasonable, but it's smaller screen isn't nearly as useful as the Surface Duo's.

You can pre-order the Surface Duo at the Microsoft Store, AT&T and Best Buy. It'll also work on T-Mobile and Verizon's networks, if you nab an unlocked model.