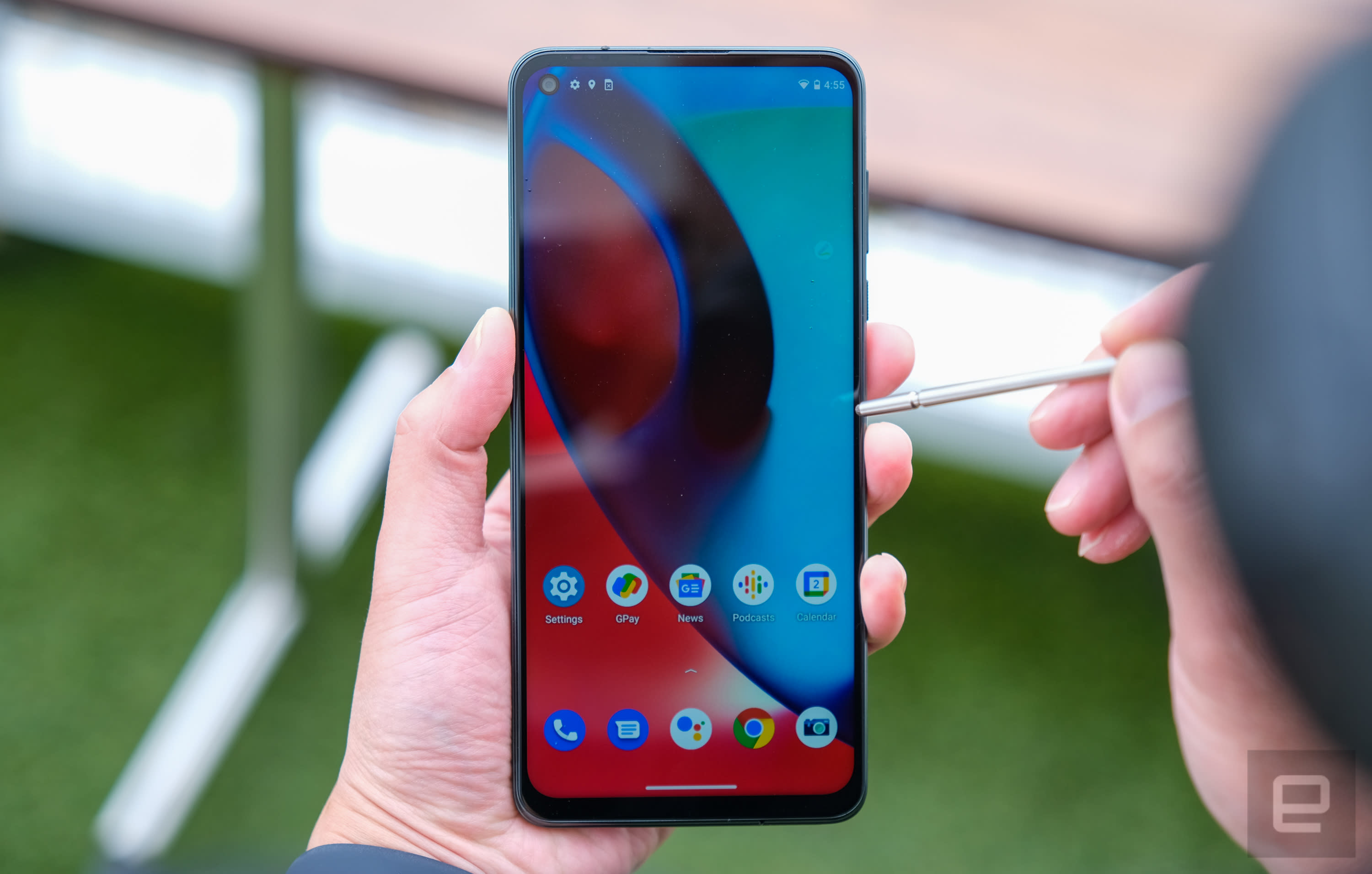 Motorola reveals yet another Moto G Stylus, this time with 5G

But can it compete with tough new low-cost rivals?

We weren’t quite sure to make of Motorola’s first Moto G Stylus when it was announced back in 2020, but the company was clearly onto something: the subsequent 2021 model quickly became the best-selling phone in its G-series lineup. Maybe that’s why Motorola was so keen to announce yet another new Moto G Stylus today. The new Moto G Stylus 5G will set you back $400 when it goes on sale on June 14th, and we went hands-on to see if it has the chops to compete with a new wave of affordable 5G devices.

The first thing you’ll notice about the Moto G Stylus 5G is how big it is — that’s all thanks to its enormous, 6.8-inch Full HD+ display. Normally, a nearly 7-inch screen would feel pretty daunting, but the Moto G Stylus 5G manages to subvert those expectations a bit thanks to the display’s 20.5:9 aspect ratio. Make no mistake: it’s still a handful, but on the whole, it’s more manageable than you might expect.

Meanwhile, the LCD screen itself is capable of producing some pleasantly punchy colors and offers plenty of room for your videos to stretch out, but there’s one notable caveat to keep in mind. When we took the phone for a spin last week, the skies over New York City were ominously overcast. Even so, the Moto G’s screen simply bright enough to be all that helpful outdoors, so we’re naturally pretty skeptical about how it would hold up under more intense sunlight. That said, the screen performed more respectably once we brought it inside and started mucking around with the stylus.

Using the redesigned capacitive stylus was mostly a pleasure on this big screen, though you’d do well to keep your expectations in check — there was no way the G Stylus could outperform the S Pen in terms of precision. Still, an on-site caricaturist had no trouble using the stylus to sketch my face in the Moto Notes app, so fledgling smartphone artists and note-takers shouldn’t have too much trouble getting their work done here. (In case you were wondering, no, you can’t see his portrait. It was extremely unflattering.)

That screen also provided plenty of room to frame up shots with the Moto G’s quad-camera system. The headliner here is a 48MP main sensor with an f/1.7 aperture that managed to take some surprisingly detailed shots during a quick trip to a Yankees-Rays game. We’ll need to test this thing more seriously before passive judgment, but overall, this main camera seems plenty respectable. The same could be said for the 8-megapixel ultra-wide camera, which rendered the field and the mostly empty seats at Yankee Stadium quite nicely. There’s a notable lack of detail here, but that’s true much of most ultra-wide cameras anyway — for now, consider us cautiously optimistic.

Rounding out the package is a seemingly paltry 2-megapixel macro camera (because people apparently enjoy these things) and a depth sensor that helps give portrait photos a decent dose of bokeh. Also new here are a slew of cutesy video modes, including one that records with the front and rear cameras simultaneously, and a Spot Color mode that did a fine job locking onto a single color in the frame and greying everything else out. Are these must-use features? Probably not, but they’re fun to muck around with all the same.

Inside the phone lurks one of Qualcomm’s new Snapdragon 480 5G chipset, plus 6GB of RAM and 256GB of internal storage. This obviously isn’t the company’s fastest silicon, but it benefits from enough generational changes that we’re seeing quite a few other smartphone makers embrace it for their own lower-mid-range devices. (Here’s looking at you, Nokia X20.) The 480 offers enough horsepower to keep all the on-screen action moving at a comfortable clip, but it’s worth noting rivals like Samsung’s Galaxy A42 5G pack more powerful processor for around the same size. If nothing else, though, this combination of chipset and a 5,000mAh battery should yield pretty great battery life — Motorola says the phone is rated for two full days of use off a single charge.

With the flagship phone market largely centered around two brands, it’s no surprise we’re seeing much stiffer competition in the lower end. The Moto G Stylus 5G is shaping up to be yet another solid option in the sub-$500 space, but do yourself a favor and have a long think about whether you need a stylus before shelling out $400 for one.