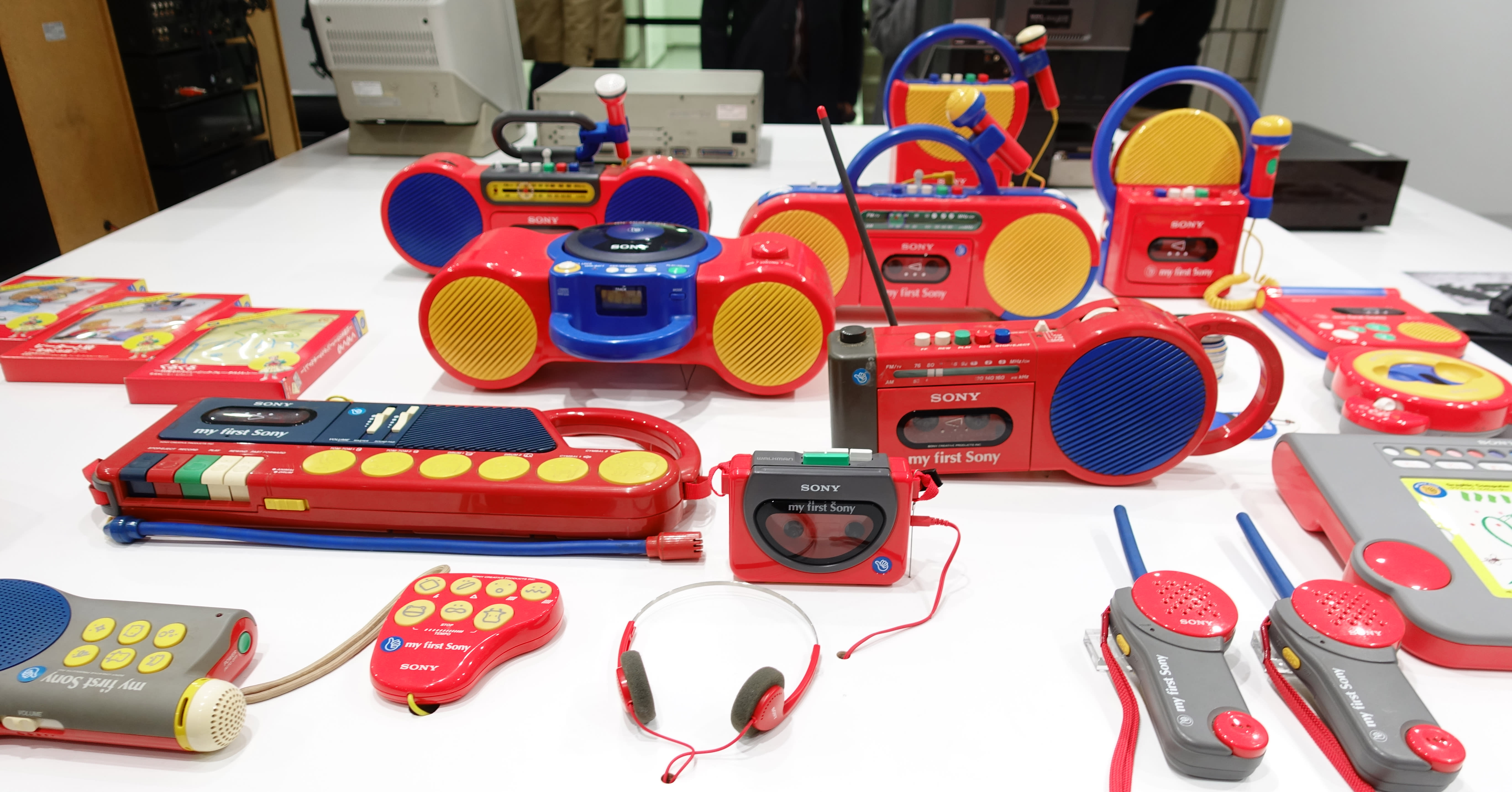 My first Sony was My First Sony

The line was a bold(ly colored) stab at building lifelong brand loyalty.

We all have that first cherished gadget, like a game console or a CD player. If you were lucky you got one pretty young, and one built for kids specifically. Today’s children generally end up with electronics from Leapfrog and VTech (or a purpose-built kid’s audio player like Yoto or Toniebox). But when I was young there wasn’t a lot of choice: For basic computing products you’d turn to VTech or Texas Instruments, and for audio devices you’d go with a Fisher Price record player or tape deck. I had one of the latter, and it served me pretty well. But when it was time to upgrade, I still wasn’t quite ready for an “adult” boombox. Luckily, Sony had just started up its My First Sony line, and the tape player my parents bought me was my first introduction to the storied electronics brand.

Introduced in 1987, My First Sony was a diverse line of products aimed at younger audiences, with rounded shapes, big buttons and lots of chunky plastic and rubber that could survive a drop. The initial color scheme adopted across the line was intended to be gender-neutral, with lots of red and accented with yellow for the speakers and blue for the working parts. It would later switch the roles of blue and yellow and add in some gray for a more “mature” and less toy-like look.

Despite the playful designs and kid-friendly features Sony was adamant that these were not toys. They were full-fledged electronics, so the company aimed most of its advertising at parents, not the children themselves, since the products ranged in price from a low of $35 to as high as $199. (Adjusted for inflation that’s $78 and $445.) It even specifically avoided airing commercials on Saturday mornings, since only kids would be watching at that time and not their mothers or fathers. However, the My First Sony line was sold in chains like Toys ‘R’ Us and Child World in addition to department and electronics stores, which meant that kids were still exposed to the products on a regular basis while out shopping for toys.

The line included a number of tape players like the CFM-2000 “Radio Cassette-Corder” that my parents gave me, which had a built-in FM radio and could also record. (The “record” button was helpfully a bright red, as a sign that I should not press this while listening to my favorite Debbie Gibson tapes.) It had a large round handle on the side so the player could be easily carried around. Handles were actually a common feature among the line’s cassette players, with the blue grips on the earliest products eventually giving way to a more streamlined red and sometimes even gray. A few of the tape players came with a lollipop mic that could be plugged into the player so a child could hear their voice through the speaker or record themselves onto a blank tape. Some of the players, like the TPM-8000, even eschewed a standard volume wheel in favor of three buttons for “low,” “middle” and “high,” a way to protect little ears from excessive volume. (The volume wheel, incidentally, was the first thing to break on my player, and I had to wedge a folded piece of paper underneath the dial to get sound out of the unit at all.)

There were of course, Walkmans, which might stand among the prettiest media players Sony ever made. They featured large clear windows so you could see the tape spooling inside, and incorporated Sony’s Automatic Volume Limiter System (AVLS), which became a standard feature across future Sony products like the Discman and the PSP. As cassettes were the most kid-safe media at the time they formed the line’s bread and butter, though it expanded out into a few other categories. There were My First Sony CD players, sound pads, alarm clocks, walkie talkies and even graphics tablets that let kids draw images with the included stylus to be viewed on a television set.

In case it wasn’t exceedingly obvious, the intention behind the line was to introduce kids to the Sony brand and hopefully make them lifelong customers: Once they outgrew their primary-hued tape players they would then graduate to an “adult” Walkman or Discman, having become accustomed to the brand’s high quality and cultural cachet. This was, after all, the company that had invented the Walkman and the CD player, so why wouldn’t you want to continue to buy into such an innovative brand? And though as a teenager I used a boombox from Toshiba and a cassette player from Aiwa, when I could finally afford to buy a personal CD player in college, I bought a Discman. It was a silver D-CJ01 with a rounded shell of clear plastic that reminded me a lot of some of the My First Sony Walkmans.

While Sony never made a formal declaration of the discontinuance of the My First Sony line, its decline in the mid-‘90s coincided with the rise of another company brand that would become a big hit with kids: the PlayStation. The introduction of the first generation PlayStation console in 1994 gave Sony another “in” to a group that was already being weaned on video games, one that was far more lucrative for the company thanks to the long-tail licensing and sale of games. When it sold a tape player, Sony couldn’t guarantee that every cassette put in it would be from Sony, but with a proprietary game system it could get a cut of every title purchased for it. And for many the PlayStation love has proved to be long-lasting, with people upgrading each generation up to the most recent. I’m not an Xbox person and I’ve missed a few Nintendo systems here and there, but I’ve always kept up with my PlayStation console. Too bad the PS5 doesn’t come in a bright candy apple red.