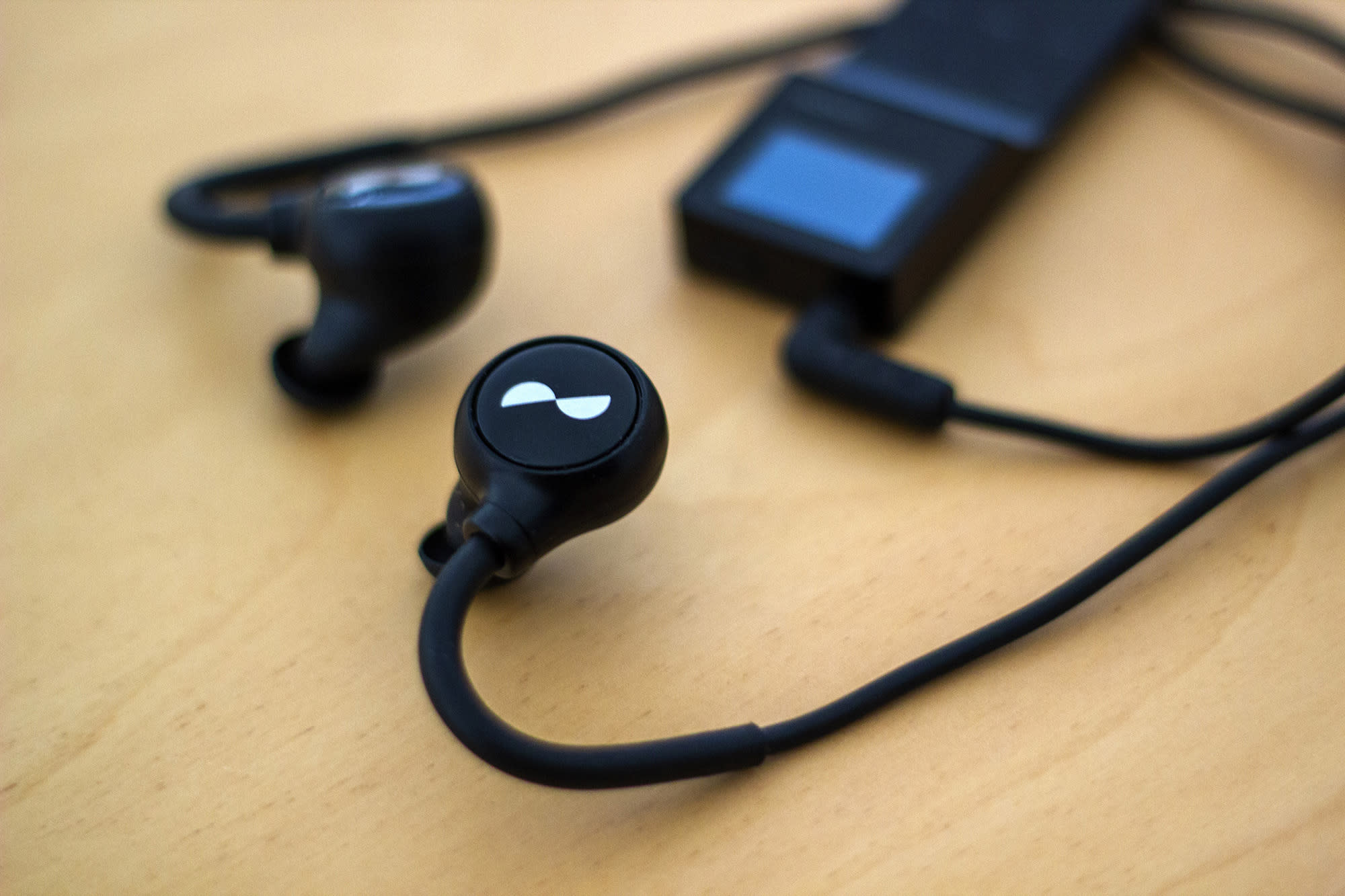 Audio designed for your ears only, now in a smaller package.

Nura was an unknown entity when it debuted its first-gen, semi-eponymous Nuraphone headphones. The quirky, tech-filled cans had a design like no other and a spec sheet to rival most headsets at the same price ($399), plus its personalized audio feature. A year or so later, the company’s second headset, the Nuraloop ($199/£199), promised all the same personalized audio tech in a much smaller form factor. For reasons unbeknownst to us, the Nuraloop took a little longer than expected to arrive, despite being teased at CES for two years running. Finally though, the wait is over, and the headset is ready to ship. Can the smaller buds open the young company to a wider audience? Mostly, yes, but there are still some decisions to be made for those looking for custom audio in a smaller package.

As with the Nuraphone, the headline feature with the Nuraloop is the customized audio. When you set up the headphones for the first time, the companion app guides you through a hearing test. Unlike rival products, you won’t need to interact with the test. It’s all automatic. Once that’s finished, it’ll create a profile that you can switch on or off as you choose. I loved how this worked with the Nuraphone, and the same is true here. I have no idea why you’d want to turn it off, other than for comparison. The Nuraloop sounds pretty bad without the profile, almost as if to deliberately convince you how much better the bespoke profile is. The difference is that stark.

This makes it a little hard to objectively define the audio, given that theoretically they output different sound for every individual. All I can say is that for in-ear buds, my profile delivers a pleasing experience. The mids and highs feel coherent and balanced while the bass is a little lacking for my taste. That’s no problem though, as the Nuraloop has an “immersion” mode that is effectively a bass boost you can set to a level you like. This feature on the Nuraphone was haptic. Here it’s more subtle, and even dialed right up, it doesn’t sound like ridiculous bass; it’s surprisingly natural.

Rather than jump on the true wireless bandwagon, Nura decided to go for a more classic over-ear hook configuration with the buds connected by a cable, like in the good old days. Despite my having been an early fan of true wireless, there’s no major benefit for me in losing the last wire. Also, unlike TWS headphones and even most sport buds, the Nuraloop can also connect via 3.5mm jack via a magnetic attachment. It’s a clever solution (it’s also how you attach the charging cable), but it means the cable runs down your back, which can get tangled if your phone is in your front pocket or connected to a laptop. Still, it’s good to have the option; it makes the Nuraloop a more versatile headset.

In wireless mode, you can expect up to 16 hours of battery life, which just bests the Powerbeats’ rating of 15 hours per charge. One small annoyance, though, is that the magnetic charging cable means you must have this one cable with you at all times. It was the same with the Nuraphone: A proprietary charging cable means you can feel anxious about forgetting, losing or breaking it. A regular micro-USB (or Type-C) charging port might not allow for such a seamless design, but it would be comforting to know I could charge them with one of the thousand cables I have at home.

Two more features that the Nuraloop has inherited from the Nuraphone are transparency mode and touch controls. Both of these can be found on other headphones as well, but they’re less common on buds this size, and the implementation is often not so great. Here, Nura has done a pretty good job of boiling it down to the smaller form factor, but it’s not perfect. Transparency, or “social” mode, works as advertised. You can dial in the exact amount of background noise you want to hear too. If you’re out in the street and want to be conscious of traffic, for example, you can add a low amount of background noise. If you want to speak with someone with the headset on, you can turn it up.

These controls can be assigned to the touch-sensitive surfaces of the buds, and this is where things can get tricky. You can assign various functions to each of the buds’ touch surfaces (tap or dial): pause/play, social-mode toggle, volume control and so on. The touch controls generally work pretty well. I have them set so tapping the left enables social mode and tapping the right stops or starts the music. This way I can switch from full music immersion to a conversation with a well-timed tap on both ears.

The dial control is a little trickier. A few over- and on-ear headphones have implemented similar controls: Rotate your finger around the edge of the cup to change the volume, et cetera. But as the Nuraloop buds are so small, it’s kind of tricky to move your finger around the edge in one fluid motion. It’s also easy for a dial to become a tap, wherein you accidentally activate social mode or stop the music. The same is true if you want to adjust the position of one of the buds in your ear or even if you casually make contact with the touch surface. A few times I found myself thinking, “Why is the music so quiet?” only to find I had accidentally activated social mode. It’s not a dealbreaker, but it’s something you’ll likely encounter.

One thing you won’t accidentally do is turn active noise cancellation on or off. It’s on by default, and the option to disable it is hidden away in the app’s settings. It’s not even one of the options you can assign to the touch controls. This is a good thing. The ANC on the Nuraloop is one of the best I’ve tried on buds this size. The Nuraphone also has ANC, but I never found that it made a huge difference, partly because there are already two layers of passive cancellation. On the Nuraloop though, I often found myself stopping my music at my desk, keeping the headphones on and working away in delightful near silence.

With all these smart features, plus personalized audio, ANC, 16 hours of battery life, touch controls and social mode, the Nuraloop has a lot to offer, especially at this price point. The Powerbeats and Powerbeats Pro cost $150 and $250, respectively. Neither has ANC, and the Nuraloop outperforms both on battery life, for example. Sony’s WF-SP800N TWS set does include ANC and “adaptive” audio features, plus configurable controls, ambient mode and decent battery life for the same price. They’re also sport-friendly, making them a viable alternative if you’re looking for something totally wire-free. So there are options but few, if any, with as loaded a spec sheet as the Nuraloop.

Does that make them the clear choice? It depends. There’s definitely a lot to like here. Just the fact that they have ANC and can be both wired and wireless puts them in a fairly exclusive club. The personalized audio works really well in my opinion, but there will always be those (blessed with perfect hearing?) who prefer their audio untouched. Then there are the minor UI quirks, like the ease of mis-touching the controls, the placement of the cable when using them wired and a few other quirks (play/pause doesn’t seem to work when wired, but other touch controls do?).

All that said, there’s no doubt that the Nuraloop is a comprehensive option that music-loving sport fans would be remiss to overlook.

Update (9/22/2020): Since this review, Nuraloop has added the following features via a firmware update.