But it makes me happy anyway.

A few weeks ago during a post-earnings call, Liz Fraser, the CEO of Kate Spade, told a two-sentence story I haven't been able to stop thinking about. "We've got a best-selling bag right now that's a pineapple, and it's $348," she said. "And she's happy to pay for that because it makes her happy." Intrigued, I started looking at the bag's reviews. "It is small, so it's not my everyday purse," one reads, before concluding with "I LOVE IT TO PIECES" anyway. Another proclaims that "although it's not as convenient as I would like, I enjoy having this bag a lot."

After living with it for a few days, I've decided the reMarkable 2 is my pineapple purse.

Like the original before it, this is a pricey tablet with an e-paper display that does a fraction of what other tablets can do for the same $400 or so. It's more reasonably priced than the first model, and to get the most out of it, you basically have to buy a $50 stylus. You'll get one for free if you preorder the reMarkable, but you're SOL after that. By every metric that counts, this thing should be absolutely obnoxious. And yet, it's made so well, with such fine attention to detail, that I can't help but like it anyway. What can I say? It just makes me happy.

Author's note: reMarkable provided us with a pre-production version of its new tablet, so it might exhibit bugs or behavior that shouldn't appear in final retail models. The company also announced yesterday that its first shipments of the v2 tablet would be delayed, with the earliest pre-orders shipping in "early September." In other words, we don't actually know when we'll get to use a "final" model, so don't look at this as a full review -- it's more of an early look at what the company got right and what it flubbed. 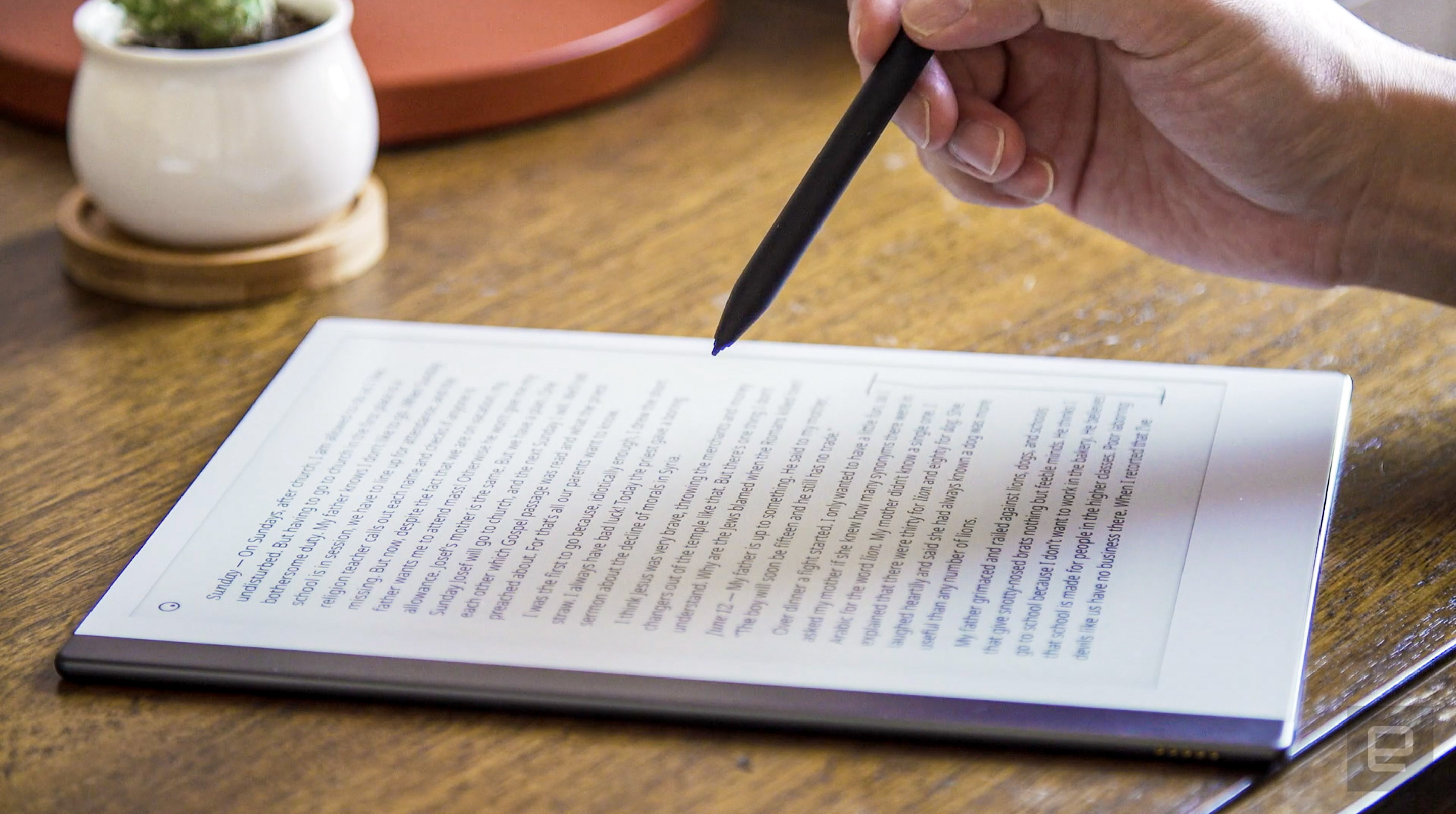 Before we go any further, it's worth spelling out exactly what reMarkable was trying to build here. For years, the company has been talking about "paper" tablets, devices that -- because of their limited lists of features -- help you focus more on the task at hand. In this case, those tasks are largely limited to note-taking, sketching, annotating documents, and reading PDFs and eBooks. There are a few more advanced features on the reMarkable 2, like the ability to sync articles to the tablet via a Chrome extension and convert your handwriting into text, but even those just solidify the tablet's intent. This is a device for people who care about writing and reading to the exclusion of just about everything else.

It’s also prettier than ever. With its 10.3-inch Canvas display and bright white plastic body, the first reMarkable tablet looked like an old, super-sized Kindle. (And I mean that with all possible fondness.) And just like the Kindle, the reMarkable has undergone an impressive physical transformation -- that white plastic is gone, replaced by a handsome aluminum frame that adds some reassuring heft. reMarkable also shaved a few millimeters off the tablet's waistline, resulting in what the company eagerly calls the "world's thinnest tablet." At 4.7mm thick, there's no denying the reMarkable 2 will make an iPad feel chonky by comparison, but considering this thing a "tablet" in the traditional sense is sort of a stretch.

The makeover doesn't end there. Most of its physical buttons are gone -- the only one left is the sleep/wake button on the tablet's top left corner and the microUSB port has been replaced with a USB-C port.

Magnets embedded into the sides of the tablet let you attach the Marker (assuming you bought one) for easy storage, and help the reMarkable 2 latch into a handsome leather folio case. And curiously, a smattering of pogo pins on the tablet's bottom-left edge hints at future expansion plans -- not that the company was willing to talk about them yet. 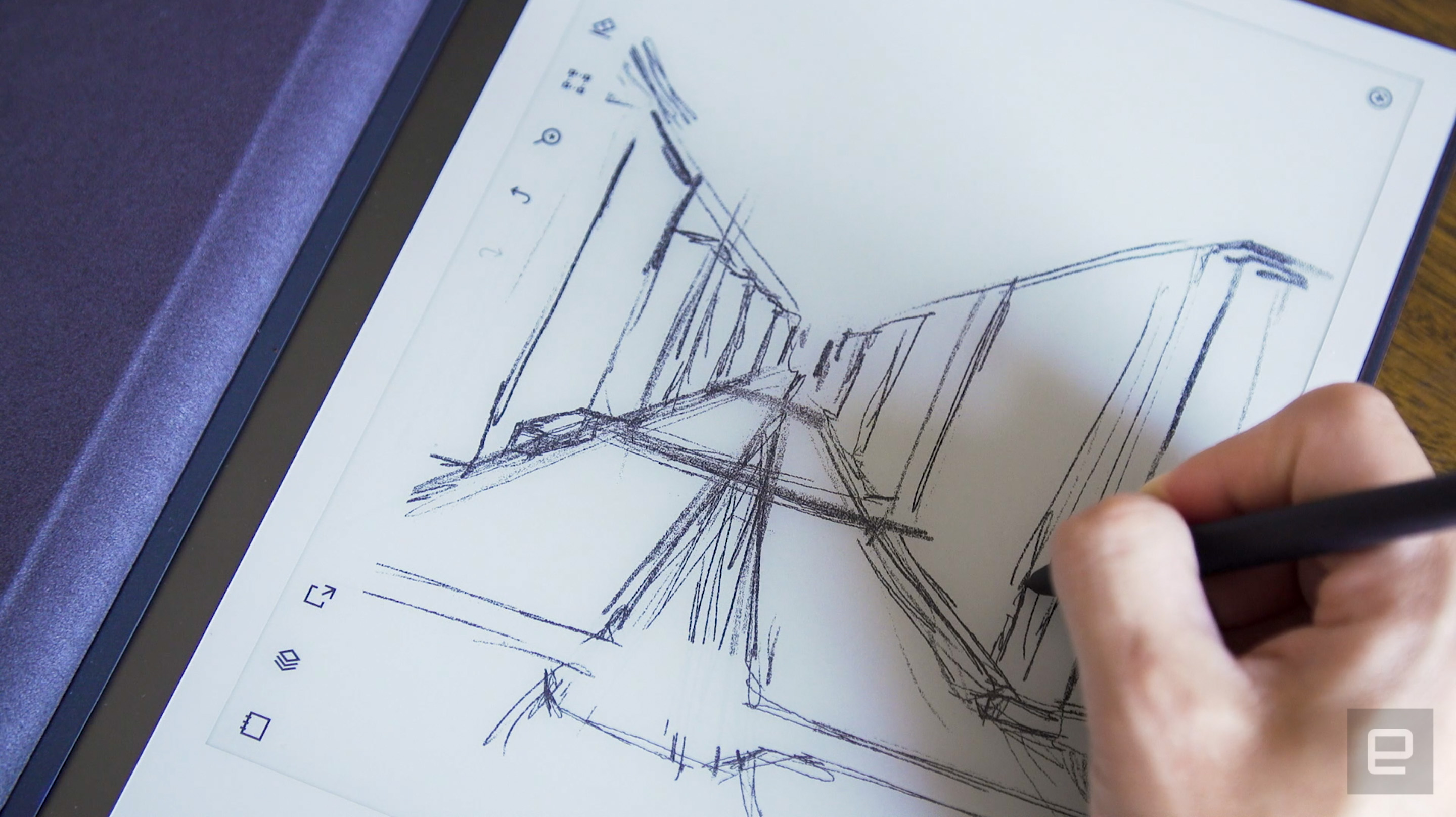 Then there's the screen. It's the same size and resolution (1,872x1,404) as the one found in the original model; there's still plenty of space to scrawl and doodle. There are some significant benefits that come with using the reMarkable 2’s more modern display, though: Text looks a little clearer, and when used with the new Marker, the tablet can detect 4,096 levels of pressure for more precise shading. More importantly, thanks to a newer Canvas panel and some improved internals, the latency between the Marker and screen has been cut nearly in half, from about 40ms to 21ms here.

I don't doubt that some will benefit from that upgrade; artists, in particular, will notice the difference as they lay down long, sweeping lines. I'm more of a frenzied note-taker, so I deal mainly with short, staccato strokes. In situations where I'm just trying to get everything down fast, this combination of screen and Marker didn't feel appreciably better. Still, I'm glad reMarkable put in the work. And I'm especially glad the company changed how the screen feels.

The company says it used a new textured resin layer on top of the glass to make writing on the reMarkable 2 feel more like writing on paper, which I don't buy. If anything, the original reMarkable's screen had a more pronounced, paper-like grittiness that doesn't come through here. That's hardly a dealbreaker, though, because writing on the r2 still feels absolutely fantastic, I think this one strikes a better balance of tactility and flow.

There's a subtle feel to writing on this that's missing from devices like the iPad Pro, and it goes a long way in making the very act of using the Marker feel more natural.

Again, I really can't overstate just how nice this hardware is. reMarkable did an amazing job elevating its tablet's design, and more importantly, all that work serves the purpose of keeping your eyes locked right on that screen. It's clean, it's functional, and I'm here for it. But that's not to say the reMarkable 2 is the upgrade everyone has been waiting for.

For one, there's still just 8GB of internal storage here, of which roughly 6GB is available to play with, out of the box. That's been plenty so far, but considering this thing's price, a bit of a boost here wouldn't have been out of line. Meanwhile, a 1.2GHz dual-core CPU replaces the pokey processor found in the original, and the 1GB of RAM is double what the first reMarkable shipped with.

On paper, that sounds like the leg up this tablet has long needed. In practice, the difference in performance feels negligible. Popping in and out of notebooks feels equally quick on both models, as does poking through menus and all of the typical navigation bits. Really, the only times I noticed a difference in performance was when it came to dealing with files I loaded onto the reMarkable 2.

As I mentioned, you can use the reMarkable 2 as an enormous e-reader if you're willing to sniff out DRM-free ePub files. (In other words, don't bother trying to get your Kindle library onto this thing.) In my experience, the formatting of ePub files tends to look a little screwy on the reMarkable, which makes tweaking the font, margins, justification, and line spacing a must. That all happens only slightly faster on the reMarkable 2, but unless you're testing an older model right next to it, you will not notice the difference. Ditto for loading and reading PDFs: The reMarkable 2 will render certain pages (particularly those with graphics or diagrams) marginally quicker than the original model, but again, it's almost a dead heat between the two. 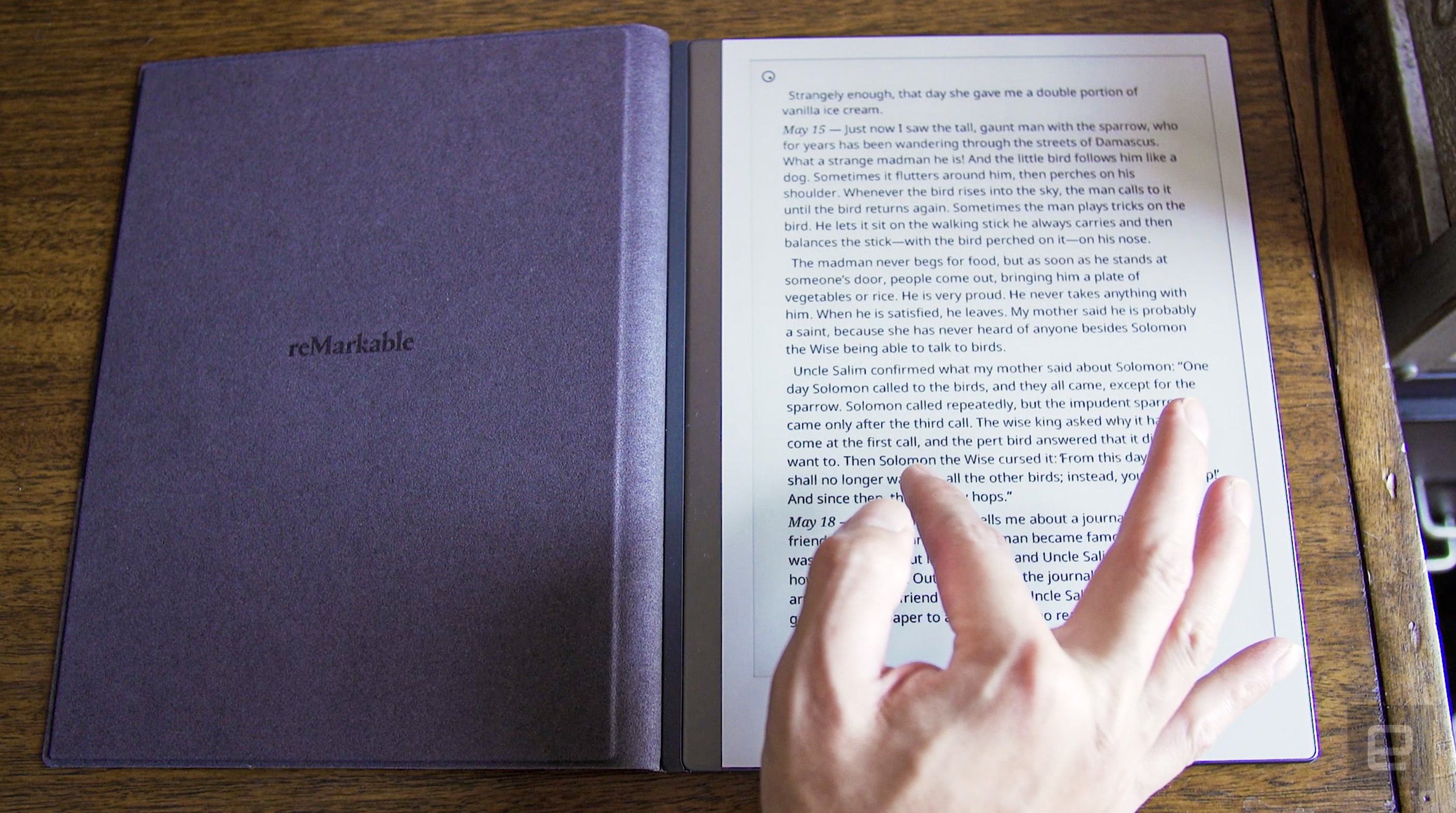 I guess I shouldn't be surprised, though. I'm told software running on this new hardware is basically identical to what you'd find on the older model -- no exclusive features or tweaks were added. That will almost certainly change over time, but for now, it means none of the reMarkable 2's underlying code was optimized for this improved hardware. That's a shame when you consider the company's fans have been waiting about two years for a follow-up, and right off the bat, I can think of a few features I'm surprised didn't make the cut.

This screen might not look like it, but it supports multi-touch inputs -- I would've loved to see pinch-to-zoom controls here to make honing in on passages in PDFs less laborious. Some sort of syncing to external cloud storage services would've been nice, too -- I know plenty of note-takers who swear by OneNote, and I would love the option of exporting my marked-up files directly to Dropbox or Google Drive. (In fairness, reMarkable has its own cloud syncing service, which works well enough but requires to you use a separate app.)

This is a device for people who care about writing and reading to the exclusion of just about everything else.

I've spent a lot of time comparing the reMarkable 2 to its predecessor, because, well -- I'm a reviewer. I professionally pick nits. If you're walking into this story totally cold, though, know that this tablet is an astonishingly good note-taking tool. You can create multiple notebooks for different projects or classes, and you have access to different templates to help the reMarkable work equally well as a sketchbook or weekly planner. Marking up PDFs is a breeze, and reading e-books, while janky sometimes, works passably.

Put another way, the reMarkable 2 manages to get a lot right, even if the most meaningful differences right now are cosmetic. And to someone like me who’s been trying to jump-start a long lost passion for writing by hand, the experience is largely delightful. Whether that's enough to warrant $400 on a super-niche tablet is up to you. Thankfully, you'll have plenty of time to chew on your decision: If you haven't already pre-ordered one of these things, you're not getting one until November at the earliest. With any luck, reMarkable will address some of these shortcomings with new software before people even have to deal with them.