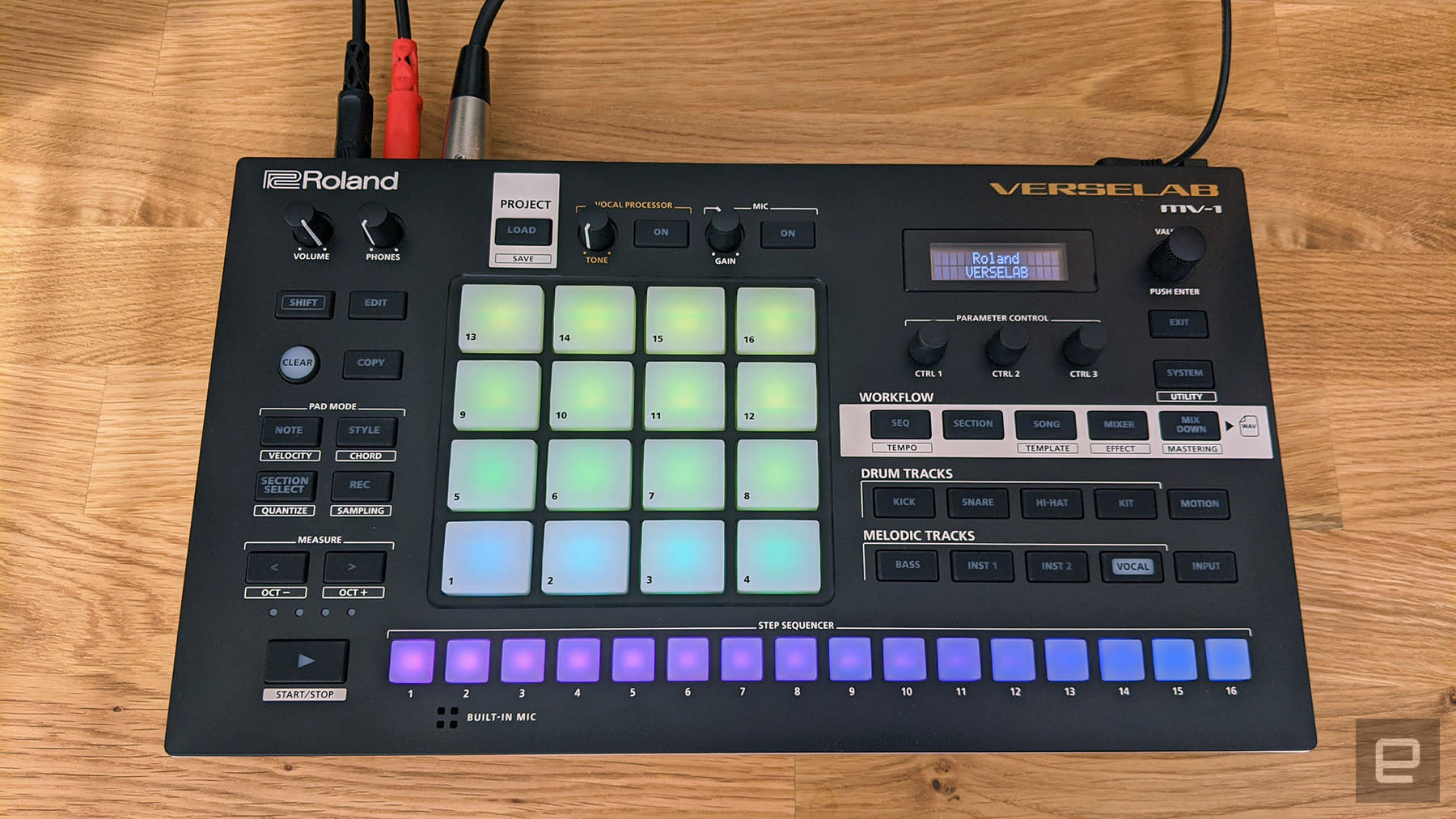 Roland's Verselab is a groovebox built for vocalists

Keeping track of Roland’s various drum machines and grooveboxes is getting tough. But its latest, the Verselab MV-1 is unique for a number of reasons. For one, it’s the company’s only instrument that combines the classic TR-style 16-step sequence with a four-by-four grid of playable pads like you’d find on its SP series of samplers on an MPC. But it also has a built in vocal processor and microphone.

Where other grooveboxes are content to let you string together a few rhythm patterns and melodies, the Verselab aims to be an all in one production studio for singers, songwriters and rappers. The built in mic is fine for laying down a quick demo vocal while you’re working out an idea, but around back you’ll also find an XLR input for connecting an external microphone. And it even has phantom power for your condenser mics.

The vocal processor is definitely the star here. It had a host of effects, including reverb and compression to give your voice a more polished edge. But there’s also more out there effects like an over-the-top autotune and harmonizer. I can neither sing, nor rap, but I can confirm these effects sound decent enough. But, no, you won’t hear me warbling off key in the demos here.

I wasn’t able to figure out how to use an effect on a live vocal. I had to record a take, then apply the autotune after the fact. But, I had limited time with the Verselab and no official manual to work from. It’s also worth noting that the level of control and customization you have over the vocal effects is fairly limited and/or buried in menus.

Update 10:34AM ET: Roland provided a preview copy of the MV-1 manual and you can in fact apply effects to a live vocal from the vocal processor menu.

That also applies to the sound engine. The heart of the Verselab, like the MC-707 and MC-101 before it, is Roland’s Zen-Core which combines virtual analog, physical modeling and sampling. There are some great sounding presets and you can tweak them a bit, but you can’t really get under the hood -- Zen-Core isn’t built for detailed sound design. The specifics of how it works though, are less important than the fact that it brings a host of classic Roland sounds with it, including iconic drum machines like the 808 and 909, along with the Juno synth line. (Roland also apparently heard my complaint about the TR-6S and included percussion from the CR-78 here, thank you.)

Some of the presets are definitely better than others, but there’s plenty of variety. You’ll find everything from abrasive EDM bass, to glassy FM electric piano, to wobbly faux-analog pads. There are also some “acoustic” sounds on here, but they’re really only useful for a particular brand of retro-cheese.

If you need a broader sound palette the Verselab also has sampling abilities. You can use the built-in mic, an external microphone or the line in around back to capture audio from anything you happen to have lying around. Want to build a drum kit out of you banging on plastic buckets, capture sounds from your favorite softsynths on your computer or chop up a soul sample -- you can do all that on the Verselab. The one problem is, the tiny two-line display makes cropping samples pretty painful. And I haven’t quite figured out how the sample slicing feature works.

That itty-bitty screen makes a lot of tasks more difficult than they need to. Considering the amount of sounds and effects, plus the sequencing and arranging tools, a larger display really feels called for. One can only hope that promised future integration with Zenbeats will help simplify things somewhat.

The screen though is my only complaint on the hardware front. While the Verselab is all plastic, it feels solid. The buttons all have a nice clickiness to them and, while the encoders don’t have a ton of resistance, they don’t feel cheap. The sequencer keys and the pads also feel great. In fact, the pads are probably the best I’ve encountered this side of an Akai device.

One final way the Verselab tries to shift the focus from beatmaking to songwriting is by simplifying the actual process of coming up with musical ideas. You can quantize the pads so that you’re always in key, there’s a one-pad chord mode for laying down harmonies and “style” mode spits out a bunch of rhythmic patterns and arpeggios.

The Verselab will start shipping this month for $700, putting it smack in the middle of Roland’s line up, along with the TR-8S. But it comes in well under the company’s flagship groovebox, the $1,000 MC-707.