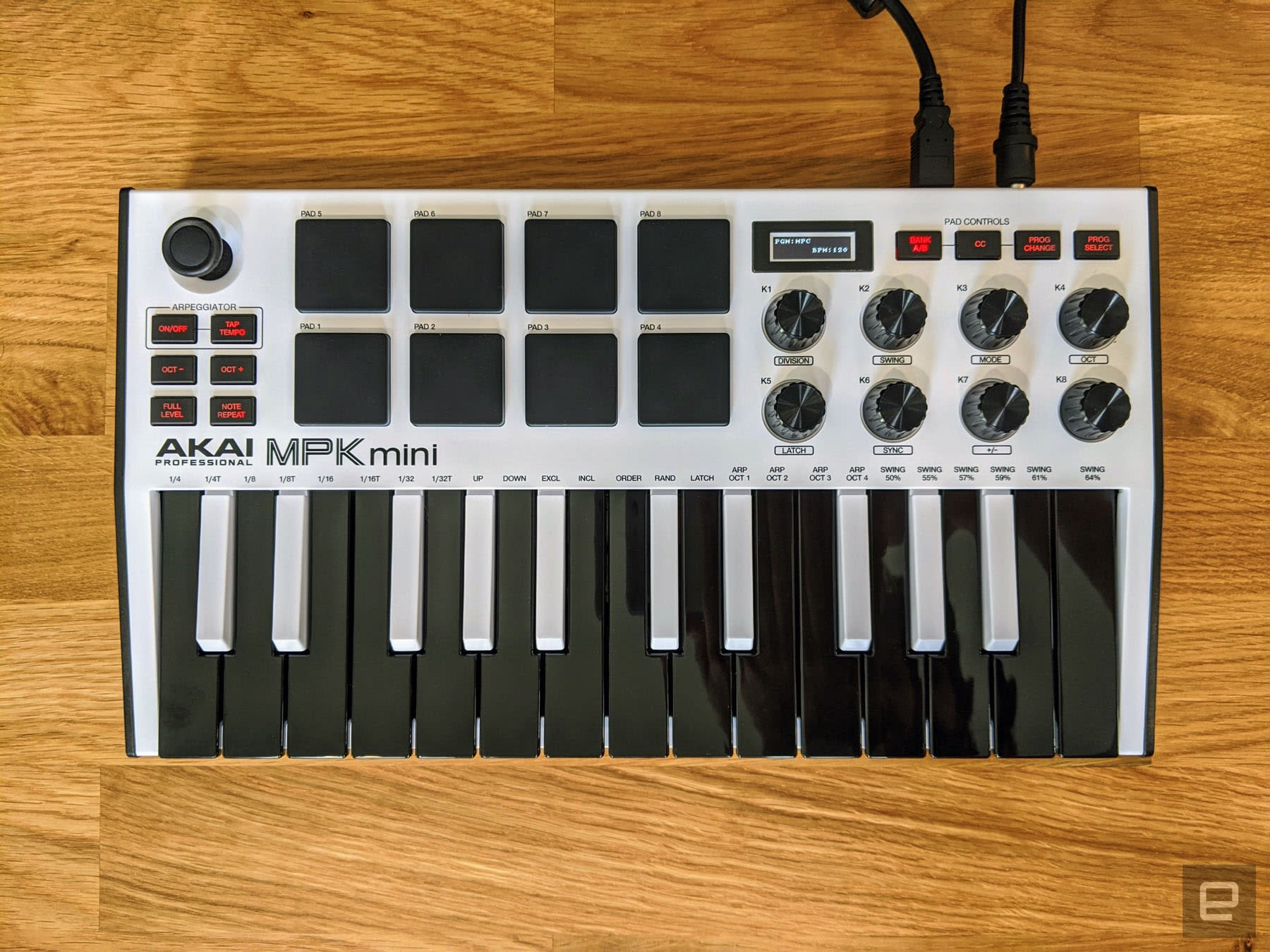 Akai is trying to reclaim its crown in an increasingly competitive field.

Akai’s MPK Mini mkII is one of the best-selling MIDI controllers out there. It’s small, affordable, and has a solid arpeggiator plus the best pads on any budget or midrange controller. But, it’s also over five years old. The portable MIDI controller field has gotten a lot more crowded, not to mention more competitive. The MPK Mini mk3 attempts to keep Akai toward the top of the heap, not so much by adding features, but by improving the look and feel of the hardware.

The main features are virtually unchanged from the previous model. There are 25 velocity sensitive keys, eight velocity sensitive pads, eight knobs, an X/Y joystick (instead of pitch and mod wheels), an arpeggiator and a note repeat function. The most obvious difference here is the addition of a small screen that provides some feedback for parameters as you change them. But right now, at least, the screen is of limited utility and doesn’t really reflect anything happening on screen in a meaningful way.

The thing is, all these components feel much more reliable on the mk3. As much as I love the MPK Mini mkII, it was never going to be mistaken for a premium piece of music making gear. The keybed, knobs and general build felt cheap and flimsy. The mk3 doesn’t suddenly feel like a $500 keyboard, but it does bring a little more heft and polish. And the keybed is improved, if only slightly. It still feels a bit hollow, but the return action on the keys is less aggressive and springy.

The joystick and knobs, on the other hand, are huge improvements. The cheap-feeling pots of the last model have been replaced with endless encoders that are larger and feel a lot less toy-like. And the joystick has a bit more resistance, which makes it easier to get subtle movement out of your notes. Interestingly, the already stellar pads have gotten even better. They have a little more travel, which improves feedback while playing, and the texture feels a little more upscale as well.

One huge improvement is simplified external syncing. Previously, getting the tempo of the on-board arpeggiator to line up with your DAW could be a challenge. Honestly, I could never get it working at all with Ableton Live. And an arpeggiator that isn’t tempo synced is only so useful. On the mk3, it’s a simple button press and a knob turn away, and it works flawlessly.

That being said, I do wish the arpeggiator offered some new features. It’s exactly the same set found on the mkII, which is still very good, but has since been bested by the Launchkey line as the best on-board arpeggiator. Also, while other controllers are adding TRS MIDI for controlling hardware synths directly, Akai is sticking with USB only. Even just the addition of transport controls for recording and playback would have been a huge welcome addition to the MPK Mini.

Still, one of the biggest selling points of the MPK Mini remains its price. At $99, it’s one of the best bang-for-your-buck portable MIDI controllers out there. Nobody offers the same combination of finger drum-friendly pads and a piano-style keyboard at that price. And the integration with Akai’s free new MPC Beats software, plus the small bundle of free softsynths and sample packs that come with it, only sweetens the deal. Just be aware that the MPC workflow is relatively unique, so if you’re coming over from Ableton or Logic, there’s a bit of a learning curve. But, in addition to being a standalone app, you can also use it as a plugin in your DAW of choice. So you can take advantage of the legendary MPC swing and sample chopping features, without completely abandoning your existing workflow.

Akai didn’t do quite enough to make the MPK Mini the clear king of the portable controller hill again. But, the improvements it did make mean you probably won’t feel disappointed if you buy one.

Update 12:20 PM ET: Akai has revised the pricing for the MPK Mini up to $119. It still remains a solid controller for the price. But perhaps a bit less of a clear leader in the bang-for-your-buck department.