Samsung Galaxy Chromebook 2: A better balance of premium and practical

Samsung fixed the issues with last year's model and lowered the price at the same time.
N. Ingraham|03.01.21

Samsung’s first Galaxy Chromebook was a thing to behold. It had an incredibly sharp and vivid 4K screen, a wonderful keyboard and a thin, light, well-designed body. It was almost everything you could want from a laptop — but its $1,000 price and embarrassing battery life made it a non-starter.

Wisely, Samsung went back to the drawing board for the sequel. This year’s Galaxy Chromebook 2 looks very similar to the original, but under the hood there are significant changes, none more so than the new display. Gone is the gaudy, eye-popping 4K resolution. Instead you get a more pedestrian 1080p screen. Samsung made a number of other compromises on this computer too — but the good news is that they’re all smart changes that make the Galaxy Chromebook 2 both cheaper ($699 as reviewed) and better than its predecessor.

Before powering the laptop up, I took note of a few other things missing. There’s no camera on the keyboard deck, so if you flip the laptop around into tablet mode, you won’t be able to take pictures. Not a big loss. Same goes for the lack of a built-in stylus — it’s just not something I find that useful on a Chromebook. But if you do miss it, the Galaxy Chromebook 2 works with any Universal Stylus Initiative pen. Finally, there’s no fingerprint sensor on the keyboard like there was on the original. That’s the first thing I really missed here, as using a fingerprint to log in is way easier than using a password. Fortunately, you can also set a six-digit PIN to login or use an Android phone to unlock the laptop.

When I powered the laptop up, I briefly forgot that it didn’t have a 4K screen, because the 1080p QLED touchscreen looks outstanding. Colors are bright and saturated without being exaggerated and viewing angles are solid. It’s also a very bright screen which helped a lot when working on a sunny morning. Yes, the resolution is lower, but the quality of the screen makes up for it — and given what a huge drain a 4K screen is on a laptop’s battery, this is a trade-off that almost everyone will be in favor of. In what was likely another cost-cutting measure, Samsung cut the Ambient EQ feature that automatically adjusted the screen’s color temperature to your surroundings. Given how aggressive it was on the original Galaxy Chromebook, I’m not missing it too much here.

The display still has minimal bezels, at least on three sides; the chin below the screen remains an eyesore and I really wish the display stretched more vertically. I’ve said many times how much I prefer a 16:10 (or taller) aspect ratio on a laptop, but the vast majority of Chromebooks still stick with 16:9. I’m used to it, but I still sigh a little and miss the 2017 Pixelbook’s 3:2 display.

I believe Samsung used the same keyboard and trackpad as it did on the original Galaxy Chromebook, which I don’t have a problem with. The keyboard isn’t the best — it’s a little shallow, like Apple’s old butterfly keyboards. But it’s a lot softer to type on and I got used to it pretty quickly. I still wish the whole keyboard was shifted up a bit higher than it is to make room for a larger trackpad, but it’s still a good (if not exceptional) experience. One thing that did give me pause was that I got double-spaces occasionally when I was typing, which reminded me of the stuck keys the old MacBook Pro was plagued with. Everything seems fine right now, but it’s definitely something I’m keeping an eye on during longer-term testing.

(Also, allow me to rant for a moment about a giant promotional sticker on the left side palmrest. Having a sticker beneath your palm is not a premium experience. I tried removing it but it didn’t come off cleanly, so I left it where it was for the sake of getting better photos. But if I paid $700 for this laptop and left a mess from peeling off a pointless sticker the day I bought it, I’d be infuriated. Let’s say it loudly: there is no need for stickers on a laptop in 2021.)

As is often the case with convertible laptops, Samsung put speakers on the bottom rather than facing up from the keyboard. There are two smaller ones on the left and right as well as a large, long one running through the middle. They’re not the best I’ve ever heard, but they sound good for a relatively small computer. Samsung says it’s using a technology called Smart Amp to crank these speakers up to 178 percent louder than “standard laptops” without experiencing distortion. I don’t know what they’re measuring off, but they are impressively loud and pretty clear. They’re not as good as the speaker in Apple’s recent MacBook Pro models, but those computers cost a lot more than the Galaxy Chromebook 2. Rounding things out are two USB-C ports (one on each side), a microSD card slot, a headphone jack, a volume rocker and a power button. Those side-mounted buttons are meant to be used when the laptop is in tablet mode — but given that the Galaxy Chromebook weighs almost 3 pounds, I never used it as a tablet.

Samsung is selling two models of the Galaxy Chromebook 2; the $699 I tested has a 10th-generation, dual-core Intel Core i3 processor, 128GB of storage and 8GB of RAM. There’s also a $549 model that has a 10th-generation Intel Celeron 5205U processor, 64GB of storage and 4GB of RAM. The i3 model adds a lot in terms of future-proofing your investment, so I’d wager most people should spend the extra $150. While I haven’t tried a Celeron-powered Chromebook recently, the lower-end model should be fine for most basic computing, though.

Last year’s model had a Core i5 processor, so this is another place where Samsung cut a corner to save some money. Like the rest of the changes to the Galaxy Chromebook 2, I think this was a wise one, as a Core i3 was plenty of power for my workflow. To be fair, my needs aren’t terribly processor-intensive. Most days I have a couple Chrome windows going with 10-15 tabs in each, plus web apps for Hangouts, Slack, Trello, Tweetdeck, Keep and YouTube Music. I also run a handful of Android apps, including Telegram, Facebook Messenger, Spotify and Adobe Lightroom, though most of those aren’t running at all times.

The Galaxy Chromebook 2 handled all these tasks without slowing down. I’m sure I could open enough tabs to make an impact, but unless you’re the kind of person who needs 30 or 40 tabs going at a minimum, the Core i3 processor and 8GB of RAM are more than up to the challenge. Performance was smooth across other apps even when pushing a higher-than-normal number of tabs — things like Lightroom stayed smooth and my music didn’t have to buffer at all.

Since the Galaxy Chromebook 2 doesn’t come with a stylus, I was unable to test how drawing apps worked and how responsive the screen is. But as I say almost every time I use a convertible Chromebook, the vast majority of people will likely just use this as a laptop. And, maybe occasionally watch a video in tablet mode. In case it wasn’t clear, I don’t consider tablet mode on a Chromebook a huge selling point.

The biggest question I had going into this review was whether Samsung improved the Galaxy Chromebook 2’s battery life. I’m happy to say the answer is a resounding yes, but unfortunately it’s not all good news. In our video playback test, where we loop a 1080p video continuously until the battery dies, the Galaxy Chromebook 2 lasted an impressive 11 hours and 49 minutes. That’s not quite the 13 hours Samsung promises — but given that last year’s model only lasted 5 hours and 11 minutes, that’s a huge improvement.

Real world performance was unfortunately a little mixed. I got between six and seven hours of life before I had to reach for the charger. Something as simple as a 20-minute video call really hurt the battery, but that speaks more to how power-hungry Google Meet is than any serious deficiency with the Galaxy Chromebook 2. Overall, I still wish that the battery life on this laptop regularly exceeded eight hours without having to baby it.

The most obvious competitor to Samsung’s latest is last year’s ASUS Chromebook Flip C436. It’s essentially identical spec-wise to the Galaxy Chromebook 2. For $799, ASUS offers the Flip with the same processor, RAM, storage and screen size. The Flip C436 has minimal bezels, a 360-degree hinge, and similarly mediocre battery life. That said, I don’t see much reason to recommend the ASUS model over Samsung’s latest, given it costs $100 more.

Even though it’s a year and a half old, Google’s Pixelbook Go remains easy to recommend thanks to its outstanding keyboard, excellent battery life, and solid overall design. It’s noticeably thinner and lighter than the Galaxy Chromebook 2, and I still regularly get well over eight hours of battery life from it. For $650, you can get it with an eighth-generation Intel m3 processor, 8GB of RAM and 64GB or storage; spending $50 more on Samsung’s newest gets you a better processor and twice the storage space. You can also spend $850 and get a Core i5 processor and 128GB of storage.

Somewhat surprisingly, Samsung plans to continue selling last year’s Galaxy Chromebook. The company told me it still wants to offer a Chromebook with all the bells and whistles it has, like the 4K screen, built-in stylus and more powerful processor. But given the poor battery life, I still can’t recommend it, even at the new lower price of $700.

Lenovo is still selling what I think is the overall best value Chromebook out there, the Flex 5. It costs about $400 on Amazon and has the same processor as the Galaxy Chromebook 2. The display isn’t as nice, and it only has 4GB of RAM and 64GB of storage. But for a lot of people, that’s plenty for a Chromebook. It’s also not as attractive, but it’s a study, affordable option that is one of the best out there. 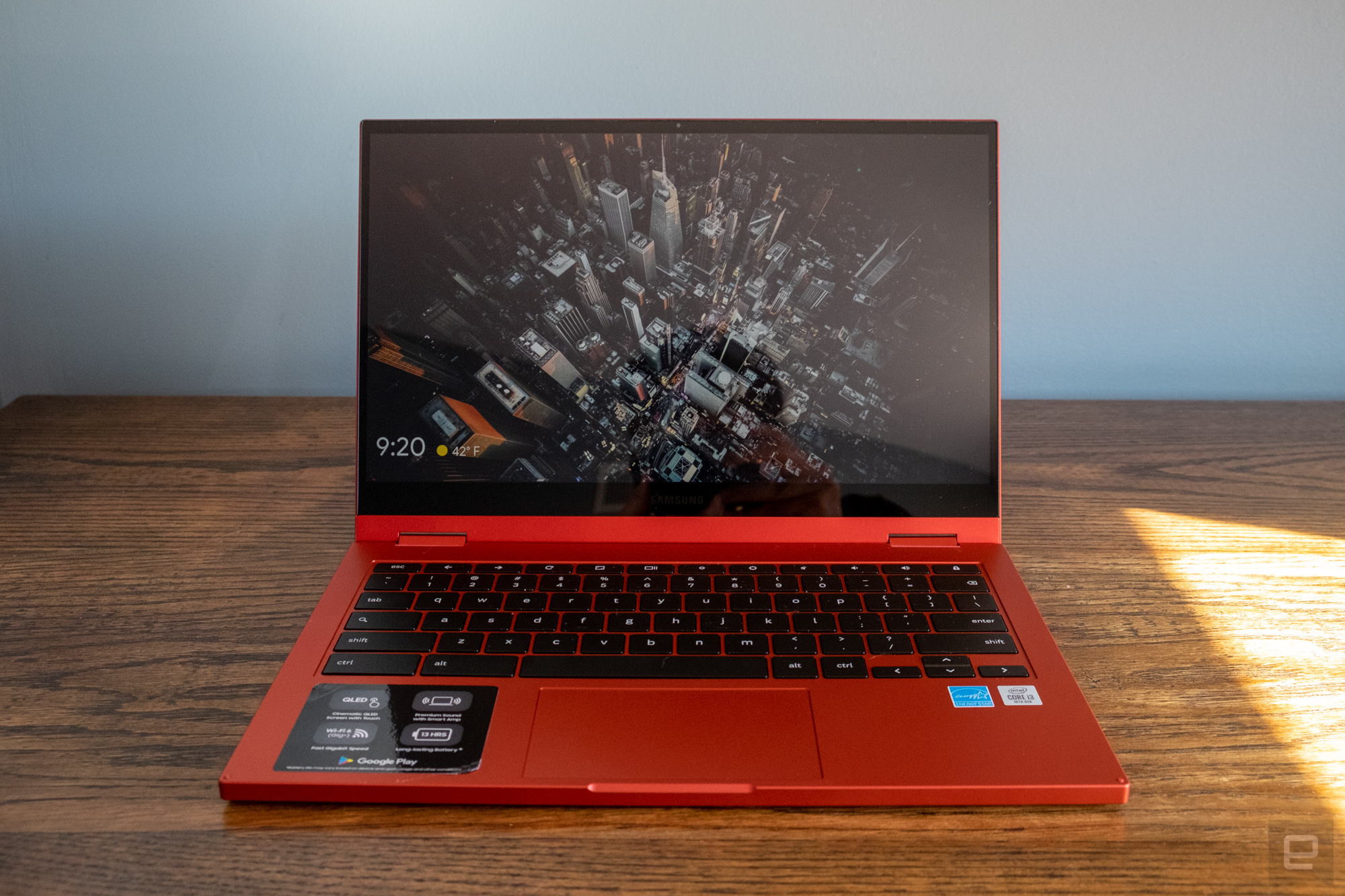 Samsung’s Galaxy Chromebook 2 is much easier to recommend than the original. The company made smart choices about what to prioritize with this model, making it a computer that should satisfy a much wider swath of potential customers. I definitely wish the battery lasted an hour or two longer, but that’s my only major complaint. Besides that, it’s about as good of a premium Chromebook as you could ask for in 2021. There are much cheaper Chromebooks out there, but if you don’t mind spending extra for a great screen, sound and industrial design, the Galaxy Chromebook should be on your list.