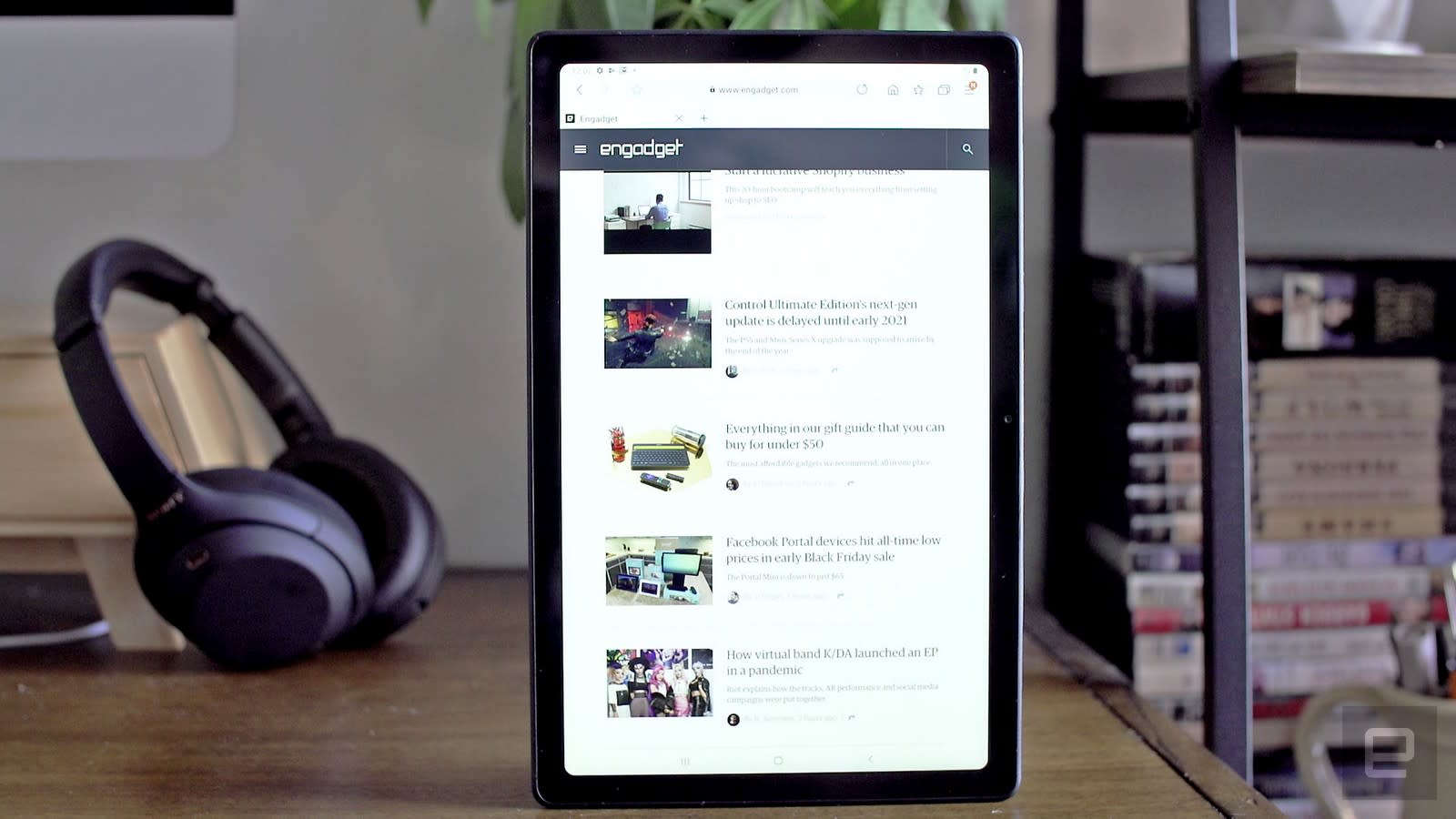 Galaxy Tab A7 review: You get what you pay for

Few companies are even making budget Android tablets anymore. Amazon’s Fire series is the best-known in the space, and its sub-$200 devices are great for kids to play on. But Amazon’s Fire OS might not be good enough for those who live in Google’s ecosystem, which is why affordable Android tablets from companies like Samsung still matter to some shoppers. The $230 Galaxy Tab A7 runs Android 10 on a 10-inch screen and has a sturdy yet lightweight frame. Samsung says this thing was “made to entertain,” so if you’re looking for a budget-friendly device for watching movies or playing games, this could be up your alley.

Unlike recent Samsung tablets like the Galaxy Tab S6 Lite or the S7 and S7+, which cost hundreds more, the Tab A7 looks pretty bland. My review unit’s dark gray metal frame lacks the shine and sleek lines of its more expensive stablemates, which is understandable given the lower price. That said, you can opt for snazzier color options like silver and gold, which might make things more interesting. The Tab A7 has a more premium build than Amazon’s plastic tablets, too, and the Tab’s display bezels are half the size of the Fire HD’s. To be fair, though, the Fire HD 10 starts at just $150 (that’s with ads; it’s $165 without).

Headphone jack hold-outs will be glad to find one on the Tab A7’s impressively thin edge, along with a microSD card slot, power and volume buttons. There’s also a USB-C port at the bottom, but sadly it charges at USB 2.0 speeds. (More on that in a bit.) There’s no fingerprint sensor here; you’ll have to rely on the 5-megapixel front camera for face unlock as the only biometric login option. There’s also an 8-megapixel sensor on the back if you really want to shoot slightly sharper pictures with your tablet. Frankly, despite weighing just 1.05 pounds, the Tab A7 feels surprisingly premium and sturdy for the price.

One of the biggest trade-offs here is the 2,000 x 1,200 LCD display. Samsung’s made a name for itself with its gorgeous AMOLED panels on flagship devices like the Galaxy S and Note phones and the Tab S7 series, so it was surprising to see such a lackluster screen this time around. If the brightness is set to 50 percent or lower, the viewing angles become considerably narrower. It was strange to see images fade in and out when I tilted the tablet back and forth — I felt like I was back in 2015.

Crank the brightness past 50 percent, and things get a bit better. I could see the leaves on trees in the background of The Good Place, while the vibrant sets on Blackpink’s music video for How You Like That simply popped. When I was watching darker scenes like Netflix’s Haunted, though, the A7’s screen was so dim that all I saw was my face staring back at me. Max brightness improved visibility, but some clips were still hard to see in sunlight.

Just like the display, the A7’s quad-speakers are underwhelming, which I expected for the price. Songs like What You Waiting For by R.Tee and Anda as well as The Weeknd’s Blinding Lights sounded hollow and tinny. The speakers were still good enough for me to hear birds chirping in the background while Ted Danson recited dialog in an episode of The Good Place.

Another tradeoff to expect when you buy a cheaper tablet is a slower processor. The Tab A7 uses a Snapdragon 662 chipset with 3GB of RAM, and it was noticeably laggy compared to the higher-end tablets I’ve tested. Searching for an app will result in a one- or two-second delay, and I had to wait a beat after tapping a tile in the open apps page before it would expand. Apps also often took a bit longer to launch than I’m used to, though once they started they generally ran smoothly. I kept up on election results and my Instagram feed on the tablet and the delays I encountered were mostly related to switching between apps.

Thanks to a 7,040mAh battery, the Tab A7 is a long-lasting machine. It clocked 11 hours and 35 minutes on our video rundown test, which means plenty of episodes of your favorite TV show or a decent Avengers binge before you need to plug it back in. The bad news: Because it uses USB 2.0 speeds, the Tab A7 takes forever to charge back up. I only saw an increase of a few percent after connecting it to a power outlet for 30 minutes or so.

Since the Tab A7 is currently on sale for $155, it’s actually a serious competitor to the Amazon Kindle Fire HD 10, which starts at $150. Samsung’s tablet has the advantage of offering Google’s Play Store and Android 10, along with some nifty software like the company’s own Notes app. With the Tab A7, you can also connect your Galaxy phone or Samsung TV to get your notifications on your tablet or stream your content to your big screen. It also has a generally nicer build.

At this price, there aren’t many other Android tablets to compare against. TCL’s 10-inch TABMAX costs €249 and offers similar features but isn’t available in the US yet. If you’re willing to spend a bit more (especially if you’re considering paying in installments), consider the $350 Tab S6 Lite. It’s faster, has a much better screen and comes with a useful S Pen.

The Tab A7 is a straightforward device. It’s a basic, no-frills Android tablet. If you can get it on sale, this is a solid purchase. At its retail price of $230, Samsung’s budget tablet is about $80 more than the Fire HD 10 but doesn’t offer much more than the convenience of easier access to Google apps. Those who want something cheap and want Gmail, Drive and Chrome built in will find the Tab A7 satisfactory. But if you can afford it, plenty of better, slightly more expensive tablets await.