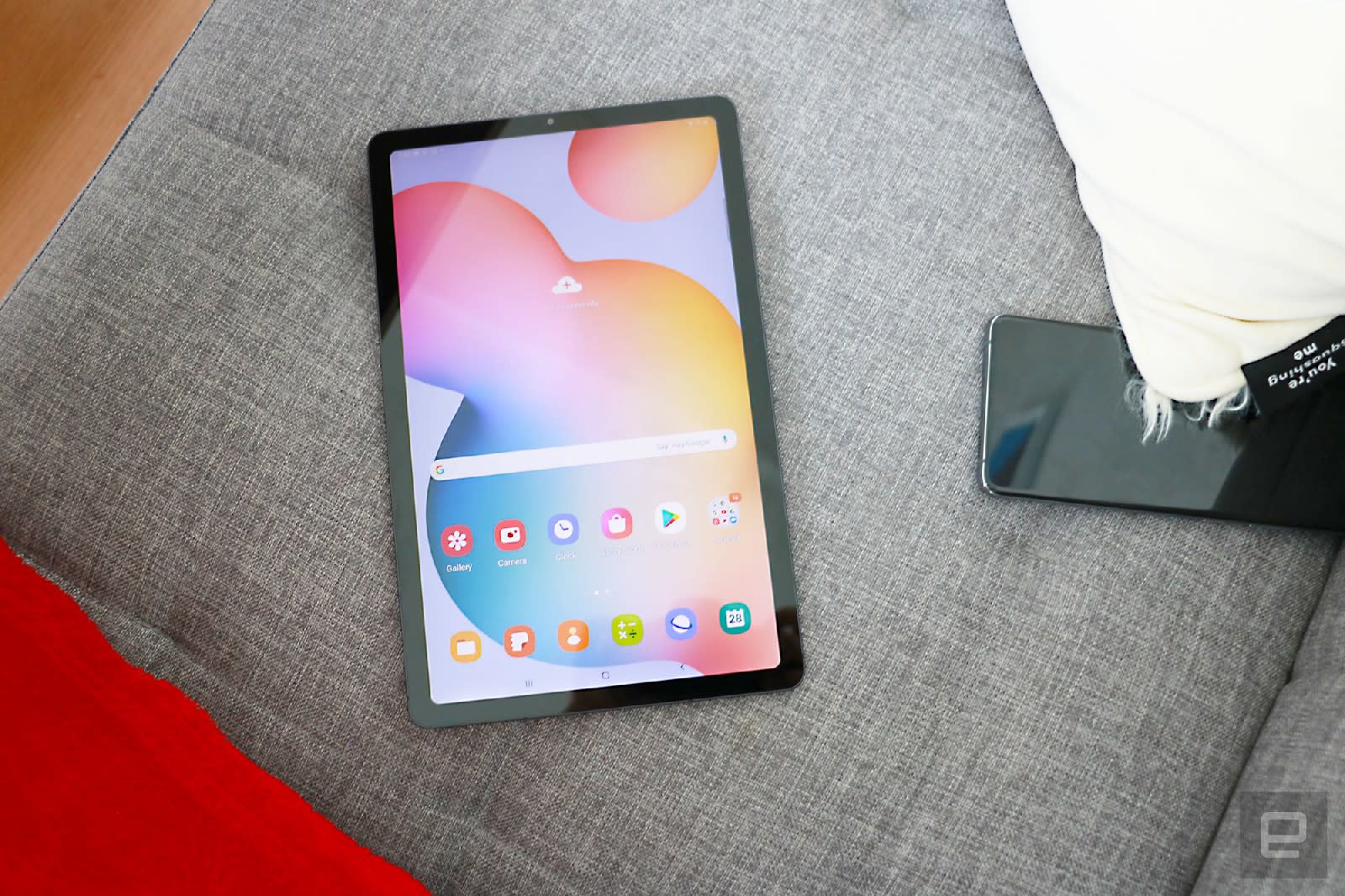 It’s been years since I have reviewed an Android tablet that didn’t come with a keyboard cover. The idea of a plain old tablet is nice, in a retro kind of way. Just because the Surfaces and iPad Pros of the world are being pitched as productivity powerhouses in tiny 2-in-1 bodies, that doesn’t mean all tablets have to be beefy machines. People still want tablets. Samsung’s latest Galaxy Tab, the S6 Lite, promises to be just that: a straightforward device offering good performance, a sumptuous display for Netflixing and, as has become essential lately, a decent webcam for Zooming. Plus, for $350, the Tab S6 Lite comes with an S Pen for intuitive note-taking and digital sketching. Pure Android tablets with modern specs are becoming a rare breed, so it’s nice to still see companies offer updated models.

One of my favorite things about the S6 Lite is that, despite its relatively low cost, the device still looks modern and feels premium. Last year’s 10.2-inch iPad, which costs about the same at $329, still has thick bezels around its screen that make it look outdated. It even has a home button -- remember those?

The Galaxy Tab S6 Lite looks pretty much the same as its pricier cousin, the Tab S6. It has thin bezels on all sides around its 10.4-inch screen and no home button on the front. Along the edges you’ll find volume control keys, a power button, a microSD card slot, a USB-C port and -- great news for wired audio hold-outs -- a 3.5mm headphone jack.

Despite offering so many connectivity options, the S6 Lite cuts a sleek 7mm (0.27-inch) profile and weighs just 460 grams, which is equivalent to just over a pound. That’s a little lighter than the iPad though the Lenovo Chromebook Duet we just reviewed weighs even less at 0.99 pounds

A lightweight design is important for most devices, but all the more so for a tablet you’re going to be holding for long periods to read or write on. With the included pen, I spent hours doodling random clouds and honing my Chinese calligraphy. My handwriting is still terrible, but that’s not Samsung’s fault. The S Pen the company includes with the Tab S6 Lite is a larger stylus than what you’d get with a Note phone or Galaxy Book laptop. It’s basically the same size as a real pencil and can magnetically snap onto the Tab S6 Lite so you don’t have to worry about losing it.

I enjoyed creating dubious works of “art” on the S6 Lite, but it was the note-taking experience I found most useful here. It’s similar to the Note 10 and Tab S6, where if you write something down in the Samsung Notes app, the software will automatically recognize your handwriting and index what you’ve written so you can easily search it later. I jotted down a quick shopping list, a bunch of to-dos and a selection of my go-to karaoke hits, then searched for the words “review,” “karaoke” and “bread.” Samsung’s app returned the correct list every time, and even highlighted the search term when I opened up the corresponding note. Like I said, my chicken scratch is ... not the best, so I was impressed that the Tab S6 Lite could understand what I scrawled.

I already liked this feature on the Note 10, but it’s even easier to use on the larger canvas that the Tab S6 Lite provides. This time around, the S Pen doesn’t support Bluetooth for motion controls like it did with the Tab S6, but that’s OK since I didn’t use those much anyway. My one gripe about Samsung’s software here is I wish its palm rejection were better so I wasn’t leaving stray dots and strokes all over my artwork. If Samsung could improve this, the company would have me fully convinced that the S Pen’s note-taking prowess is bar none.

I didn’t just use the Tab S6 Lite for drawing and taking notes, of course. I also had it propped up next to my laptop as a makeshift second screen for my minimal work-from-home office. Samsung provided a cover with my review unit, which let me prop it up at a couple of angles for easier hands-free Netflixing or YouTubing. It attaches magnetically to the Tab S6 Lite and offers a neat slot to tuck your S Pen away. This $70 case is the only one Samsung makes for this device; if you want one with a keyboard built in, you’ll need to look for third-party accessories. I don’t mind this omission, by the way. Samsung did improve its keyboard case for the Tab S6, but the buttons were still too small for typing to be comfortable for prolonged periods of time. The Tab S6 Lite is a tablet first, which is perfectly fine. 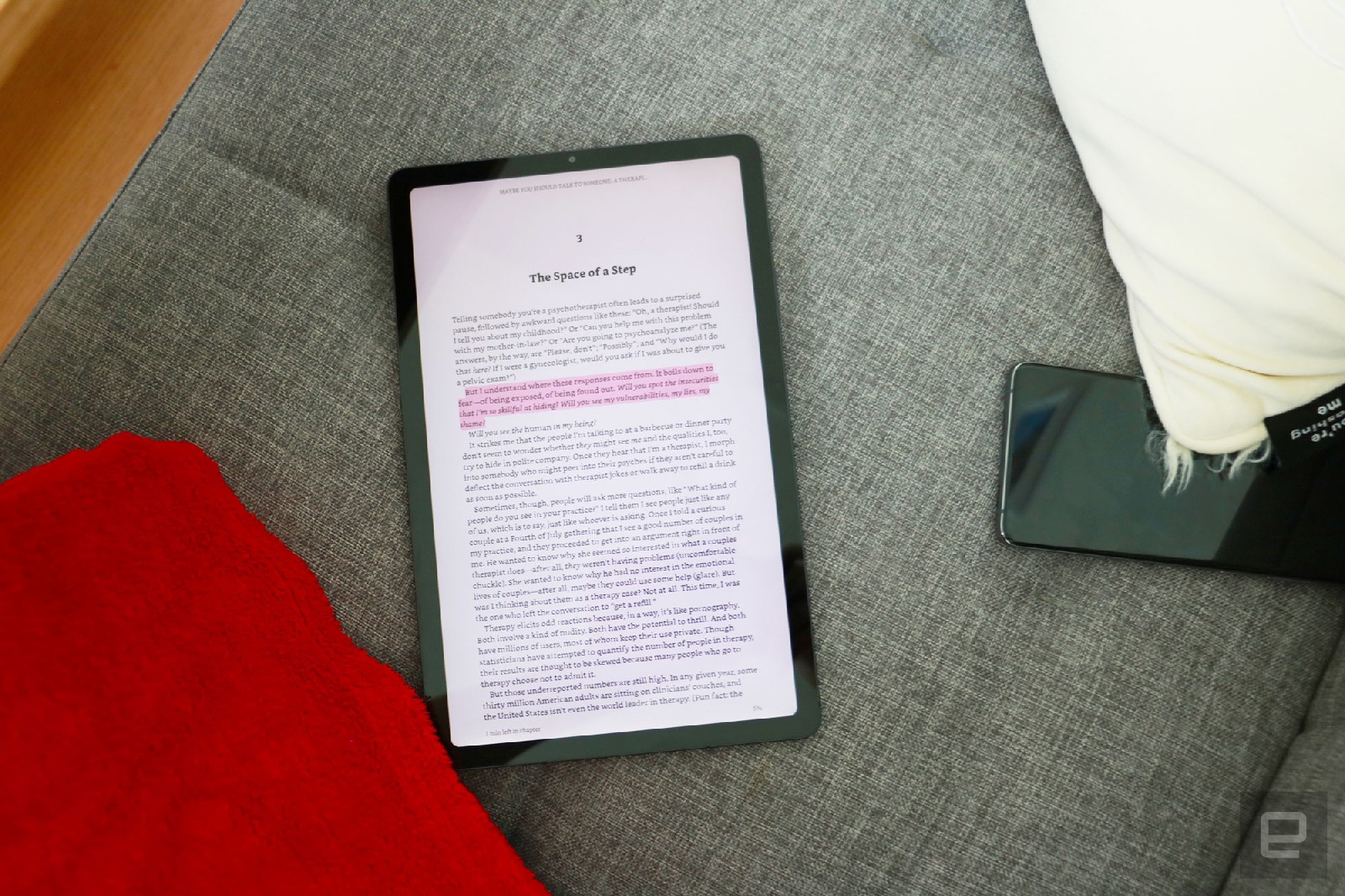 In fact, being a tablet is where the S6 Lite shines. I used it to watch The Weeknd’s music videos for The Hills and Blinding Lights and found the 2,000 x 1,200 display to be crisp and colorful. I was slightly disappointed Samsung used a TFT panel here instead of an AMOLED, but for the price I won’t complain too much. Besides, it still offered respectable image quality: details like blood dripping from The Weeknd’s teeth and the texture of his face were easy to make out. Unfortunately, the screen was harder to see in direct sunlight, even at max brightness. I did appreciate that the speakers pumped out clear, rich audio. It was plenty loud, though I wish the bass were slightly stronger.

I also liked using the Kindle app on the Tab S6 Lite to read books while lying on my couch -- this is one of the main reasons I find a tablet so appealing. I can Netflix on my TV, play mobile games on my phone, but without pulling out an e-reader, the tablet is the best device for reading. It’s also great for the current moment, with all these quarantine calls over Zoom, Skype, Google Meet, or what have you.

For those relentless video calls, the Tab S6 Lite offers a 2-megapixel front camera, which captured surprisingly detailed selfies. The device also has a 5-megapixel sensor on the back, which I didn’t use much. (I’m not a monster, after all.) But based on my testing, the rear camera is good enough for Instagram Stories or videos if you really must -- just don’t expect the superior exposure and colors you’d get from pretty much any other phone.

Since it runs Android 10, the Tab S6 Lite has access to a wealth of mobile-friendly apps. Google still has work to do to make its OS more tablet-friendly -- Instagram just refuses to flip to landscape mode, for example -- but for the most part I didn’t have major complaints about the software.

Since it doesn’t have a fingerprint scanner, the Tab S6 Lite only offers face unlock as a PIN/password-free login option. This uses the front camera, which, if you’re holding the tablet in portrait mode, is placed above the screen. When you’re holding the Tab S6 Lite horizontally, the camera is on the left. Thankfully, face unlock worked pretty much the same in either orientation, although it was a little slow in recognizing me in both modes, often taking a second or two to let me in.

In almost every other way, the Tab S6 Lite was satisfyingly speedy, thanks to its octa-core Exynos 9611 CPU. I jumped back and forth between Instagram, Chrome, the Criminal Minds mobile game and recipe videos on YouTube without delay. The 4GB of RAM Samsung provides here is on par with Lenovo’s Chromebook Duet and 1GB more than what you’ll get on the 2019 iPad. If you’re not pushing it too hard with intense multitasking and, say, playing Wheel of Fortune while on a Zoom date, you’ll find the Tab S6 Lite a speedy machine.

It’s not just fast -- the S6 Lite is long-lasting, too. It clocked 10 and a half hours on our video rundown battery test, beating the Chromebook Duet and matching the iPad. In general, too, the S6 Lite hung around longer than a day before needing to be plugged in. That’s after fairly light tasks like playing a ton of Criminal Minds, drawing for a collaboration with my friend and reading a book on Kindle, though.

Ultimately, the Tab S6 Lite is good because it’s simple. It isn’t striving to be a 2-in-1 that might require better hardware and multitasking software. Those looking for a well-designed, long-lasting and capable Android tablet will find the Galaxy Tab S6 Lite a satisfying option. Plus, the S Pen is a huge bonus for the price, especially for those who like drawing or note taking. Those looking to save a little more money should consider something from Amazon’s Fire series, though you’ll have to make do with a slightly less powerful device. With the Galaxy Tab S6 Lite, Samsung is bringing back the basic tablet, and I’m here for it.

Update (at 1:24pm ET on May 29th): Samsung clarified after publication that the Tab S6 Lite’s processor is an Exynos 9611 not Exynos 9610 like it previously told Engadget. We have updated this review with the right CPU model.