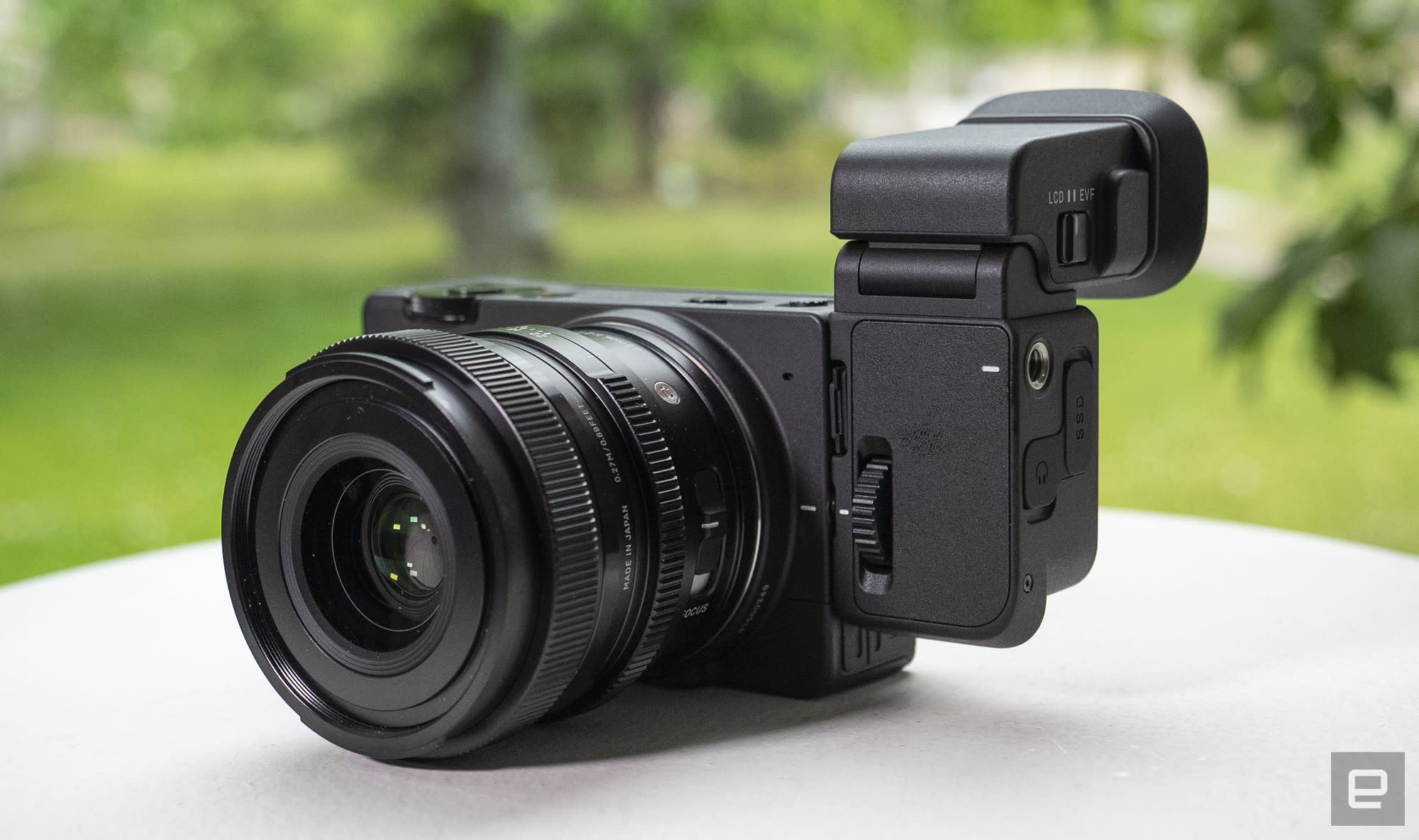 The body isn’t fit for the purpose.

Sigma created some buzz with the original 24-megapixel FP thanks to the cool, diminutive body and high-end video capabilities including RAW recording. Now, it has introduced the $2,500 fp L with the same body but a much higher resolution 61-megapixel sensor. Along with the camera, Sigma unveiled an external electronic viewfinder, which was the original model’s most-requested feature.

As before, the Sigma fp L is the smallest full-frame mirrorless camera you can buy. More impressively, it’s also the highest resolution full-frame model, period, in a tie with Sony’s A7R IV (which likely shares the same sensor). Is the size too small for the sensor? I got my hands on one for a week, along with several of Sigma’s best lenses, to find out.

The fp L has a weird, boxy shape like a squished Leica rangefinder. Manual controls are sparse, with just a front dial to adjust exposure settings, along with a video record, stills/video and power switch on top. Around back is another (fiddly) dial with a center “OK” button, plus eight buttons for the AE lock, quick menu, menu, mode, color, tone, display and playback.

The 24-megapixel fp was designed as a video and a street camera and the small, square body suited that purpose. However, the fp L has a 61-megapixel sensor, so it’s less useful for video (more on that shortly) and better for portraits and landscape shooting.

The lack of a proper grip and tilting screen is problematic for those situations, however. Though small and not heavy compared to rival cameras (427 grams compared to 665 for the Sony A7R IV), it’s not very comfortable to hold. The lack of a grip makes it easy to drop, though it does have a tank-like build.

Another issue is that a 61-megapixel sensor is begging for heavy, high-quality glass. For instance, Sigma loaned me its excellent 35mm f/1.2 GN DN Art lens and it weighs 1,090 grams or 2.4 pounds. Without a decent grip, it’s difficult to hold onto the camera and lens without a tripod or other support.

While manual controls are sparse, I figured that the top and back dials could handle most of my exposure settings. However, the back dial's D-pad controls are too sensitive. When trying to rotate it to adjust ISO or other settings, I was constantly activating the focus setting by mistake.

With the fp L, Sigma introduced the EVF-11 external electronic viewfinder that also works on the original fp. It attaches to the camera on the side, connecting to the HDMI and USB-C ports.

Connecting the EVF was tricky, as I had to wiggle the connectors into the ports and then screw it into a standard tripod-type receptor, which is a lot to juggle. Once connected, though, the 3.69-million-dot display offers decent resolution, color accuracy and refresh speeds. It tilts all the way through 90 degrees, making it possible to use it for both regular and low-angle shooting.

As for the touchscreen, it’s reasonably bright and color accurate, but unfortunately it’s fixed so it doesn’t tilt or swivel. As a result, I found it difficult to use for high and low-angle shooting, particularly for video.

Touch functions are limited to focus selection, much like older Sony cameras. However, it’s relatively laggy and not terribly accurate for that purpose. Since it lacks a joystick, though, you’re stuck using either that or the rear dial/D-pad — and the latter is pretty slow, too.

The menus aren’t terribly well designed, either, as it’s difficult to tell at a glance whether you’re in the main or sub-menus. To that end, the quick menu will be your friend when you’re using this camera.

Performance is not ideal. The specs don’t sound too bad, with burst speeds at up to 10 fps, along with a new phase detect autofocus system that supports face and eye-detect autofocus. However, despite the shift in technology, the AF system didn’t lock onto my subjects very quickly and often failed to track moving subjects. As a result, I missed quite a few photos and had quite a few others that were out of focus.

In any event, the lack of a mechanical shutter means that burst shooting is nearly out of the question, because the rolling shutter on this camera is pretty bad. If you’re trying to pan on a moving subject, you could get a large amount of skew or distortion that renders shots unusable. The lack of in-body stabilization doesn’t help, as it forces you to rely on lens stabilization. And many L-Mount lenses you’d want to use with this camera lack that feature.

If you shoot subjects that don’t move too fast (i.e. landscapes or portraits) the fp L does deliver in terms of image quality. The 61-megapixel sensor allows for sharper photos than any other full-frame camera except, of course, Sony’s A7R IV.

Colors and skin tones are clinically accurate, making it easy to warm or cool them as needed. A lot of shots that I grabbed, and those taken in a studio by my pro photographer friends, needed very little touchup after the fact (above). As before, the fp L delivers great JPEGs straight out of camera and offers several preset color modes (natural, portrait, landscape, monochrome, etc.) that remove the need for post-processing.

The RAW DNG files are easy to tweak in post if you need to recover highlights or shadows. As with the Sony A7R IV, it’s not as bad as you’d expect in low light considering the small pixels. In many cases, you’re better off underexposing a bit and pulling up the shadows in post.

The fp L has great specs for video on paper, like 4K 30p recording to 8-bit RAW DNG or H.264, or even 12-bit 4K RAW DNG recording if you hook up an SSD via the USB-C port. However, the 61-megapixel sensor has slow readout speed and about seven times more resolution than you need for 4K, making it poorly suited for video.

Sigma appears to use oversampling rather than line-skipping like Sony does with the A7R IV. That does produce very sharp video, but terrible rolling shutter because the sensor has relatively slow readout speeds. There’s less rolling shutter if you export video to an external recorder via the mini-HDMI port, but then it shifts to a line-skipping mode that delivers much softer video.

In the right circumstances (internal 12-bit RAW recording to an SSD without much camera or subject movement), video quality should be solid (a DNG video frame is shown below). However, as Gerald Undone has pointed out, and as I’ve seen myself, it seems like you can either have decent dynamic range or good color accuracy, but not both.

If Sigma simply introduced a color-accurate 10-bit log mode with internal recording, as Panasonic and Fuji do, for instance, then the camera would be usable for shooting the occasional video despite the rolling shutter issues. As it stands now, though, the fp L is not a great option for video. The original fp is better in this regard, and it costs $800 less.

One good thing that Sigma has done with the extra resolution is create a unique digital zoom that gives you anywhere from a 1.0 to 2.5 times crop, depending on the video resolution. With that mode, you can effectively transform a 24-70mm zoom into a 24-175mm lens with very little loss in quality.

As you may have guessed by now, it’s hard to recommend the Sigma fp L. Used correctly, it could be a decent landscape or portrait camera, especially if you’re looking for a small form factor. But with the external EVF it costs $3,000, which just happens to be the price of Sony’s A7R IV. And the latter camera, with better handling, in-body stabilization, a mechanical shutter and far superior autofocus, is a much better choice.

It’s even harder to recommend the fp L if you’re looking for a hybrid video camera. In that price range, there’s a wealth of choices in full frame (Panasonic’s S1 and S5, Canon’s EOS R6) that cost considerably less. And if you’re willing to go down in sensor size, Blackmagic’s $2,495 BMPCC 6K Pro delivers RAW recording with much better image quality, while Fujifilm’s X-T4 offers 10-bit 4K at up to 60 fps.

It’s too bad this camera isn’t more practical, because I like the idea of an ultra-small, well-built mirrorless full-frame camera. Sigma has proven over time that it makes fantastic lenses across a wide range of cameras and mounts, giving users more choice. However, a camera is another level of difficulty that Sigma has yet to master — hopefully, it’ll make some adjustments and keep trying.

All products recommended by Engadget are selected by our editorial team, independent of our parent company. Some of our stories include affiliate links. If you buy something through one of these links, we may earn an affiliate commission. All prices are correct at the time of publishing.
View All Comments
Sigma fp L hands-on: Tiny camera, big sensor, enormous compromises