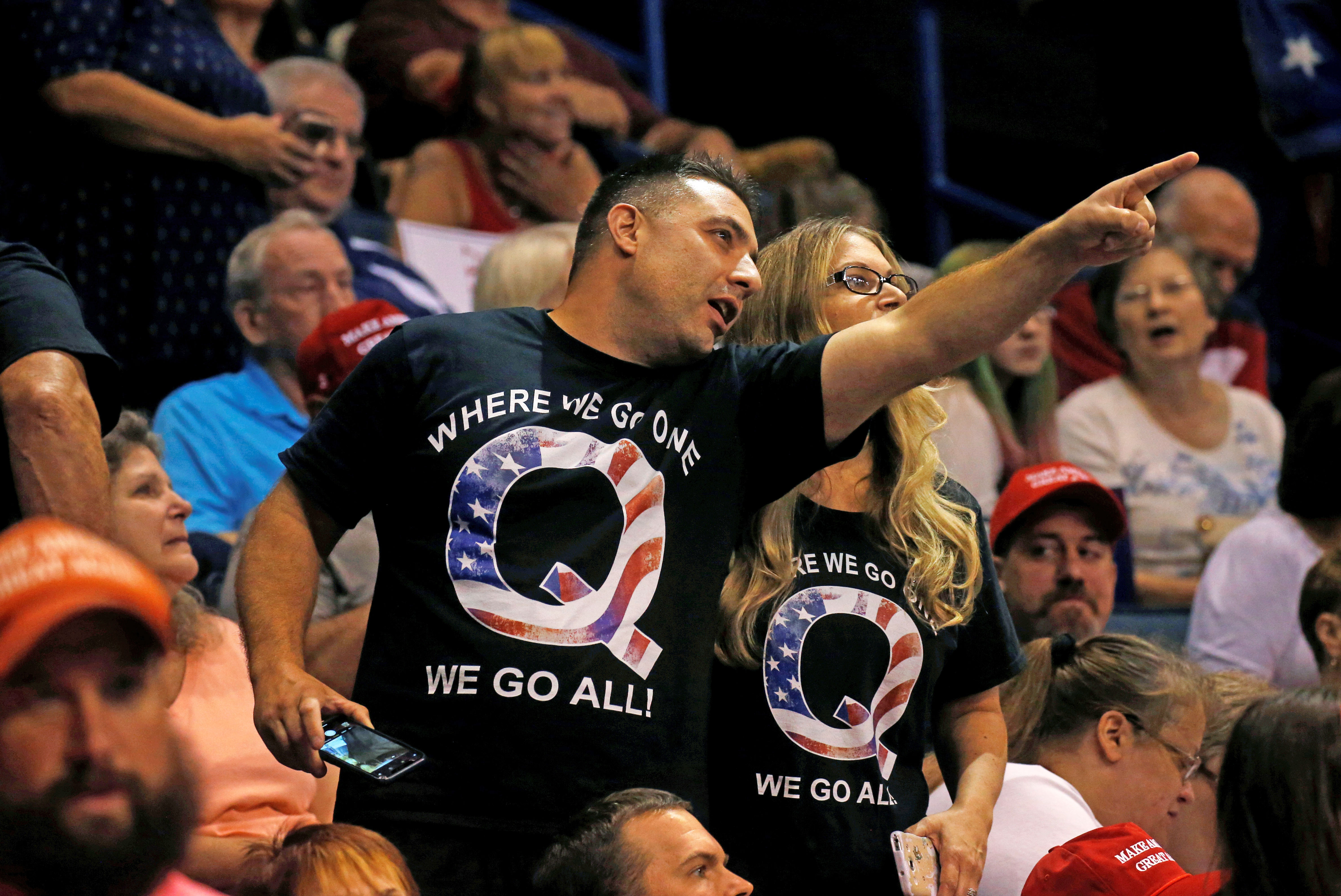 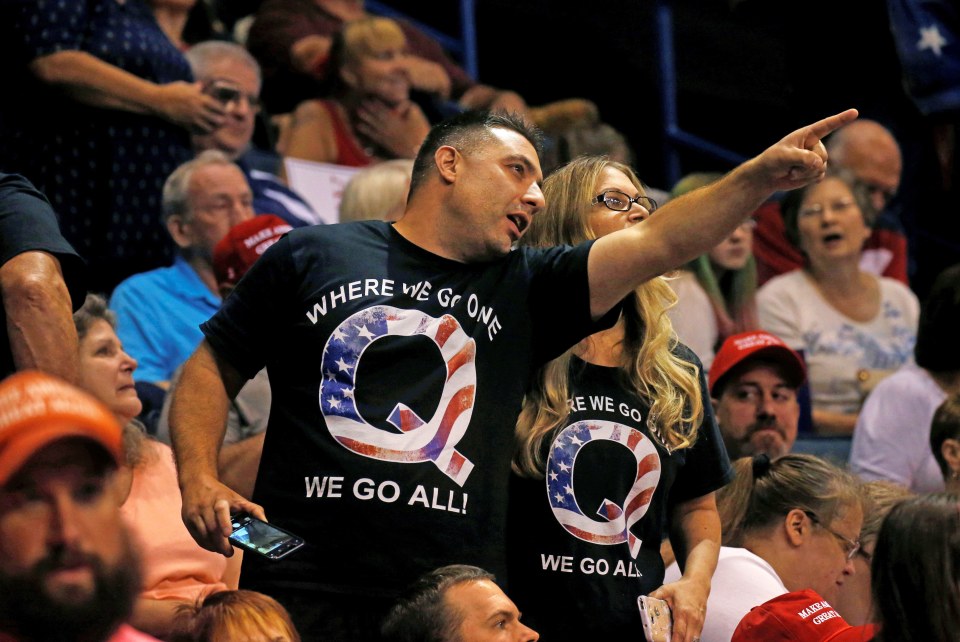 When Republican Marjorie Taylor Greene won a primary contest for a Georgia House seat, it made national headlines for more reasons than a hard-fought campaign. The victory will also likely give her the distinction of being one of the first members of Congress to back QAnon.

Greene isn’t alone. Across the country, several vocal QAnon followers have run for office this election cycle. While her likely victory — her district is “one of the most Republican in the country” — may be the exception, QAnon is no longer confined to the fringes. And with the most recognizable politician in the country — Donald Trump — amplifying QAnon content more than 200 times, according to Media Matters, it’s become even harder to contain.

That QAnon, a far right conspiracy theory that originated on 4Chan in 2017, could gain so much prominence might sound ridiculous. Proponents of QAnon believe the government is run by a ring of pedophiles/child-eating cannibals who will ultimately be brought down by Donald Trump. QANon’s favorite targets are somewhat predictable: the Clintons, George Soros and Bill Gates frequently star in their memes. But Hollywood celebrities like Tom Hanks, Chrissy Tiegien and Oprah also play a central role in the conspiracy.

The conspiracy theory may have started on the darker corners of the internet, but it flourished on social media. Facebook and other platforms have played a central role in fueling the growth of QAnon, and the coronavirus pandemic has only accelerated its spread.

“It is certainly more mainstream than it's ever been before, says Katy Byron who runs the digital literacy initiative MediaWise, which teaches people how to spot misinformation and disinformation online. “You can find support for the theories that feed the QAnon beast on any given day, it’s not that hard. It is hard to bat down.”

It’s perhaps unsurprising, then, that the coronavirus pandemic presented a unique opportunity for QAnon to spread its theories about the dangers posed by the global elite. Even before widespread lockdowns and shelter in place orders, QAnon took “a significant interest in several aspects of the coronavirus outbreak,” according to researchers at Graphika. “The community was highly engaged on the topic of the outbreak even in its early stages,” noting that #coronavirus was the fourth most popular hashtag among QAnon supporters in the month of February.

Besides conspiracies about the Chinese origins of the virus, there were also “attempts to incorporate the coronavirus outbreak into the wider QAnon structure using the hashtag #StormIsHere,” Graphika writes. (The “storm” refers to a widespread belief that there will be a global reckoning when there are mass arrests of the supposed pedophiles running the government.)

As coronavirus conspiracy theories continued to spread, so did interest in QAnon. Data from Google Search trends shows that searches for QAnon spiked in mid-March around the start of widespread lockdowns and shelter in place orders. QAnon’s Wikipedia page saw similar spikes during the same period, as noted by Mother Jones.

It’s not clear exactly why interest in QAnon skyrocketed at the start of the pandemic.  It’s possible that many people, seeking out alternative explanations on the complex cause of the pandemic, were exposed to QAnon content for the first time. A simpler explanation is that people had much more free time on their hands and QAnon inadvertently found itself a much more captive audience than it might normally have. Facebook reported in March that it was struggling with “unprecedented” demand for its services.

Regardless, the interest translated to new social media followers. Some of the most popular QAnon Facebook groups and Instagram accounts saw a huge influx of followers that coincided with lockdown orders, according to The Wall Street Journal.

At the same time, other groups that regularly traffic in conspiracy theories, such as anti-vaccination groups, seized on coronavirus conspiracy theories in March and April. Many of these have become intermingled with QAnon, often helped by Facebook’s recommendation algorithms. (Facebook says it removes accounts that break its rules from recommendations.)

As Engadget reported in May, Instagram’s algorithm pushes followers of anti-vaccine conspiracies to QAnon pages and hashtags. The same has happened in Facebook groups, where QAnon has an even bigger presence. There are thousands of QAnon groups with millions of members, according to data obtained by NBC News. While on Instagram, the most popular QAnon pages have hundreds of thousands of followers each. The hashtag #WWG1WGA, a reference to a popular QAnon mantra, has more than 1 million posts on the app.

The (sort of) crackdowns

It’s not just Facebook, either. QAnon has also had significant influence on Twitter, which recently announced a widespread crackdown on the movement in order to prevent “offline harm.” Even TikTok has tried to limit the visibility of QAnon content in its app.

But unlike Twitter and TikTok, Facebook has done little to slow QAnon’s momentum. The company has removed a handful of accounts for breaking its rules against platform manipulation and took down a 200,000-member group for breaking harassment and hate speech policies. But the company has so far declined to take any broader action, despite hinting that it may do so.

“We take action against accounts, Groups, and Pages tied to QAnon that break our rules,” a Facebook spokesperson said in a statement. “Just last week, we removed a large Group with QAnon affiliations for violating our content policies, and removed a network of accounts for violating our policies against coordinated inauthentic behavior. We have teams assessing our policies against QAnon and are currently exploring additional actions we can take.”

Meanwhile, QAnon has attached itself to issues with a more “mainstream” appeal. Recently, #SavetheChildren has become a rallying cry for QAnon believers, who have inundated Facebook groups and Instagram pages with memes about supposed child trafficking.

Though human trafficking is a real and serious problem, QAnon believers’ obsession has twisted the issue to fit the broader Q conspiracy. Perhaps the clearest example of this was when rumors started spreading that furniture retailer Wayfair was using expensive industrial cabinets as a front for selling actual children.

According to BuzzFeed News, it originated on Reddit, but quickly took off on Instagram thanks, in part, to lifestyle influencers. Fact checkers quickly debunked the hoax, but not before it went so viral that Polaris, the group behind the National Human Trafficking hotline, had to issue a press release begging people to stop reporting the bogus theory because it was making it more difficult for them to help actual victims.

This underscores what experts warn is the most worrying part of QAnon: that it has been linked to real-world harm. As the conspiracy theory has gained steam, its followers have been involved in real-world violence. The FBI said last year the group posed a domestic terror threat.

But even if most QAnon supporters never turn to violence, the effects could still be damaging, says West, the conspiracy theory researcher and author. For individuals, believing in conspiracy theories like QAnon can lead to social isolation or even financial distress, if they are duped into supporting the causes financially. Distrust of the medical establishment can have health consequences.

But these beliefs can also be bad for society when they become widespread,  West says, pointing to Greene’s recent election win.

In this article: Misinformation, TikTok, coronavirus, qanon, internet, Social media, Facebook, Twitter, Conspiracy theory, instagram, Covid-19, news, gear
All products recommended by Engadget are selected by our editorial team, independent of our parent company. Some of our stories include affiliate links. If you buy something through one of these links, we may earn an affiliate commission.