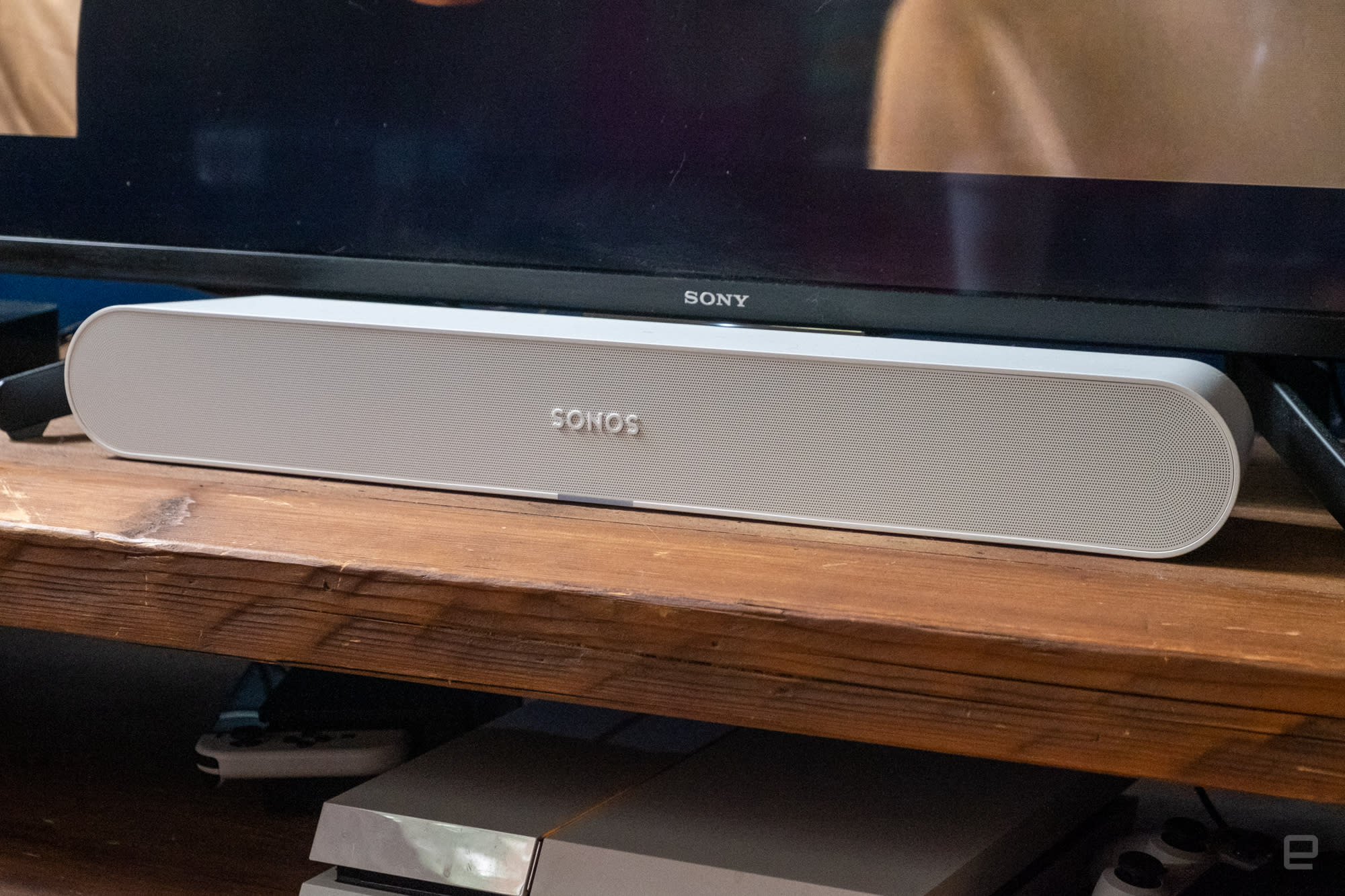 Sonos Ray review: A soundbar that nails the basics

The Ray gets the most important things right, including sound quality.

With the $279 Ray soundbar, Sonos is going after a new market. The company’s previous home theater products have all been $400 or more and have primarily been geared toward people intent on getting the best sound possible. The Ray, meanwhile, is more accessible for people who want better sound than their TV speakers can provide, but don’t necessarily care about things like Dolby Atmos support or room-shaking bass. The Ray isn’t exactly a budget speaker, though, so I set out to discover if Sonos made the right compromises here in its effort to make a more mainstream soundbar.

Physically, the Ray is smaller than the already-compact Beam, with a tapered design that’s wider in the front than it is in the back. Unlike other Sonos soundbars, though, the Ray’s speakers are all forward-facing; in this way, it reminds me a bit of a wider and flatter version of the Sonos Five speaker. This design means you can tuck the Ray into a media stand and not have to worry about the sound bouncing off of nearby surfaces. Since the Ray doesn’t have a mic for voice assistants, you don’t need to worry about whether it can hear you if you place it in a media stand, either.

As with just about every other Sonos product, the Ray has touch-sensitive buttons on top to start and pause music and adjust the volume. There’s also an LED status light on the front, rather than on the top as it is on most Sonos speakers. Again, this is in case you put it on a shelf that would otherwise hide the light if it was on the top. On the back, there’s a power jack, setup button, ethernet port and optical audio jack; Sonos left out HDMI support to cut costs, and since the Ray doesn’t support more advanced audio formats like Dolby Atmos, the additional bandwidth HDMI allows wasn’t needed here.

The setup process was simple: I just plugged the Ray into the wall and connected it to my TV with the included optical audio cable. From there, I finished setting it up in the Sonos app on my phone. The process will take a bit longer if you’ve never set up a Sonos speaker in your home before, because you’ll need to do things like authorize the various streaming music services you want to use. But I simply needed to wait for the app to recognize there was a new speaker to set up, tell it which room the Ray was in and then wait for it to get connected to my wireless network.

Once that’s done, you have the option of tuning the Ray using what Sonos calls Trueplay. This uses the microphone on an iPhone or iPad to balance the speaker’s audio based on how your room sounds. It’s a bit of a weird process, walking around your space slowly raising and lowering your phone, but I’ve found it always makes my Sonos speakers sound better, so it's worth the five minutes it takes to set it up if you have a compatible device on hand.

How do movies sound?

I’ve spent the last week or so watching movies and shows with the Ray and it’s an obvious improvement over my TV’s built-in speakers. Sonos said it focused on dialogue quality, bass response and a wide soundstage, and it definitely succeeded on two of those fronts. Dialogue sounds extremely clear, whether I was watching a drama like HBO’s The Staircase or enjoying Galadriel’s narration at the beginning of Lord of the Rings: The Fellowship of the Ring. The latter also provided a great chance to hear how the Ray performed in more intense, action-filled sequences. As the prologue of Fellowship continued to its massive battle against the forces of Sauron, swordplay and arrows flying filled the space around the narration in a well-balanced mix. And the rumbling explosion and massive thud of Sauron’s helmet hitting the ground after his defeat were a good opportunity to hear the Ray flex its bass muscles.

Another favorite of mine for testing soundbars is the 15-minute intro of Pacific Rim. The beginning of this over-the-top movie has it all – huge battles between giant robots and monsters, cities being destroyed as panicked citizens flee and a solid heroic narration, all of which the Ray faithfully reproduced in a well-balanced mix.

The Ray pulls this off despite having much simpler acoustics than the Beam: it includes two center midwoofers, two tweeters with split waveguides to broaden the speaker’s soundstage, a bass reflex system that provides a surprising amount of low-end performance, and four Class-D amplifiers. It’s an effective system, but my main complaint is that the waveguides and computational audio can only do so much to widen the soundstage. While the Ray clearly has a solid stereo presence, it’s not nearly as immersive as the first-generation Sonos Beam that I usually use. Even though my older Beam doesn’t support Dolby Atmos, its larger size and more complex speaker array give it a big advantage over the Ray.

The Ray is also not the loudest speaker out there. Again, this isn’t a huge surprise, as Sonos is marketing this device for use in relatively smaller space. That doesn’t mean it was too quiet for me, but I did usually have its volume up over 50 percent for it to be loud enough. If I really wanted to kick things up while watching a big movie, I might get closer to 70 percent. If you’re the kind of person who really wants theater-style audio, you’ll be better off with a more powerful device.

The good news is that, as with all other Sonos home theater devices, you can pair the Ray with the Sonos Sub to improve bass performance. You can also use two Sonos One speakers as rear surrounds to make for a much more immersive experience. The Ray might be an ideal choice for a first soundbar to upgrade your TV’s audio and then use it to build out a more complex setup down the line. That said, the Sonos Sub costs a whopping $749; it’s hard to imagine someone buying a Ray and then spending three times as much on a subwoofer.

While the Ray is meant to be hooked up to your TV, it’s also a capable music speaker. Sonos says that when it builds its home theater products, music quality is just as important as how it works with movies and shows. In my testing, the Ray sounds great – songs like Dua Lipa’s “Future Nostalgia” and Carly Rae Jepsen’s “Cut to the Feeling” have plenty of low end and super-clear vocals. Meanwhile, the hard left- and right-panned guitars in Metallica’s “Wherever I May Roam” were quite distinct. While it’s still not the loudest speaker, the Ray is more than capable of filling a medium-sized room with clear and lively music.

Naturally, the Ray has all the same multi-room audio features as other Sonos speakers. This means you can simultaneously stream the same music to multiple speakers on your WiFi network, or play something different on each one. You can set up custom speaker groups (just the speakers on your first floor, for example) and stream audio directly to the Ray using AirPlay 2. The only real feature it’s missing compared to most other Sonos speakers is voice control. There’s no mic, which means you can’t control the speaker directly with Alexa, Google Assistant or the upcoming Sonos Voice Control feature. That said, if you have other smart speakers, including any other Sonos speaker with a mic, you can use them to control the Ray.

There’s no question in my mind that the Ray is a serious upgrade over a TV’s built-in speakers. What’s less clear is how much better it is compared to other small soundbars, like Roku’s $180 Streambar Pro. Sonos has a long history of delivering excellent sound, and the Ray continues that tradition. And just as the portable $179 Sonos Roam is a good gateway drug into the Sonos ecosystem, the Ray is a good first Sonos for someone who wants to improve their TV audio. Yes, you can find cheaper soundbars, but Sonos is betting its reputation for excellent sound quality will make the Ray a success. After spending some time with it, I’d have no problem recommending the Ray to anyone who wants an easy way to upgrade their TV’s audio but doesn't care about having the best speaker that supports the most formats. For a lot of people, particularly those with smaller living rooms, the Ray will be just the right soundbar for their space.