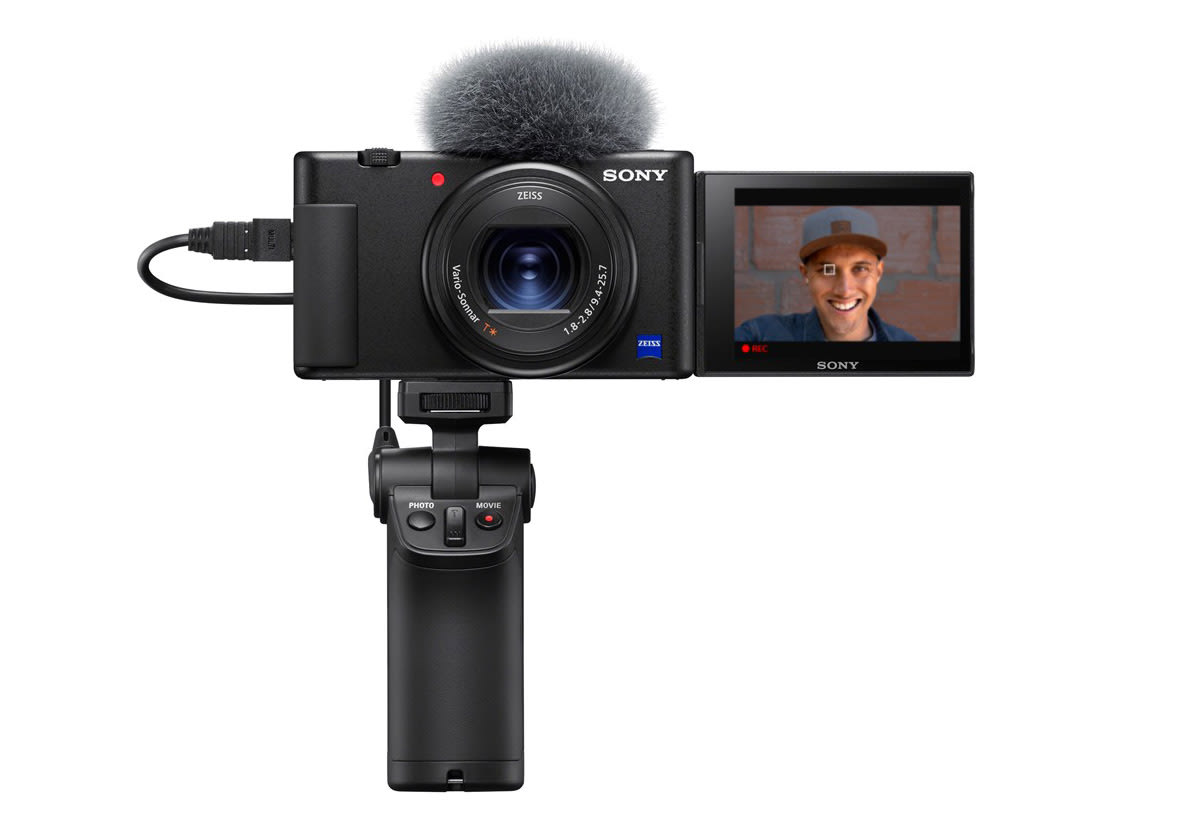 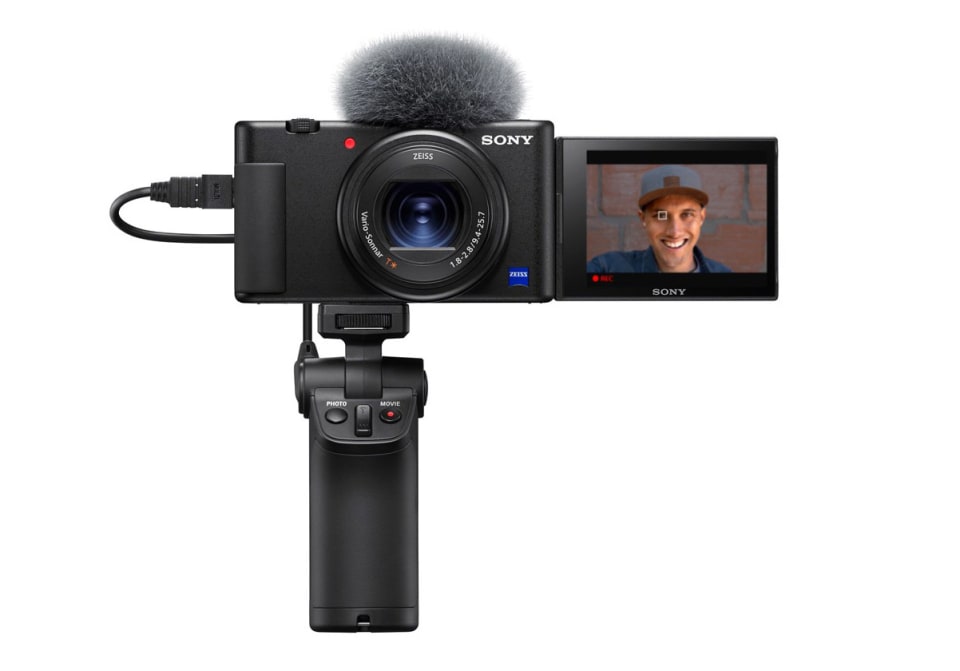 As it teased, Sony is going all-in on vlogging with the ZV-1, a video-centric compact that fuses features form the popular RX100 V and RX100 VII cameras. It has a 20-megapixel 1-inch sensor that’s big enough to deliver decently blurred backgrounds, along with a fast 24-70mm f/1.8-2.8 lens. It also supports 4K recording at up to 30 fps with a full pixel readout, or 1080p video at up to 120 fps.

The ZV-1 has a couple of extra tricks, too. It’s one of Sony’s first cameras with a pivoting flip-out screen that makes vlogging a whole lot easier. That display has touch-focus control (though not touch menu control), letting you easily select a region to focus on. Given its vlogging purpose and price point, however, it has no electronic viewfinder.

The record button is placed prominently on top, rather than around the back like before and it even has a small grip, unlike all other RX100 models. All that makes the ZV-1 just a smidgen bigger than the RX100 VII.

On top of that, it offers real-time autofocus tracking and real-time eye AF in movie mode, much like the A7R IV, A6600 and other recent Sony mirrorless cameras. It can handle photos, too, with shooting speeds of up to 20 fps with autofocus and auto-exposure enabled. 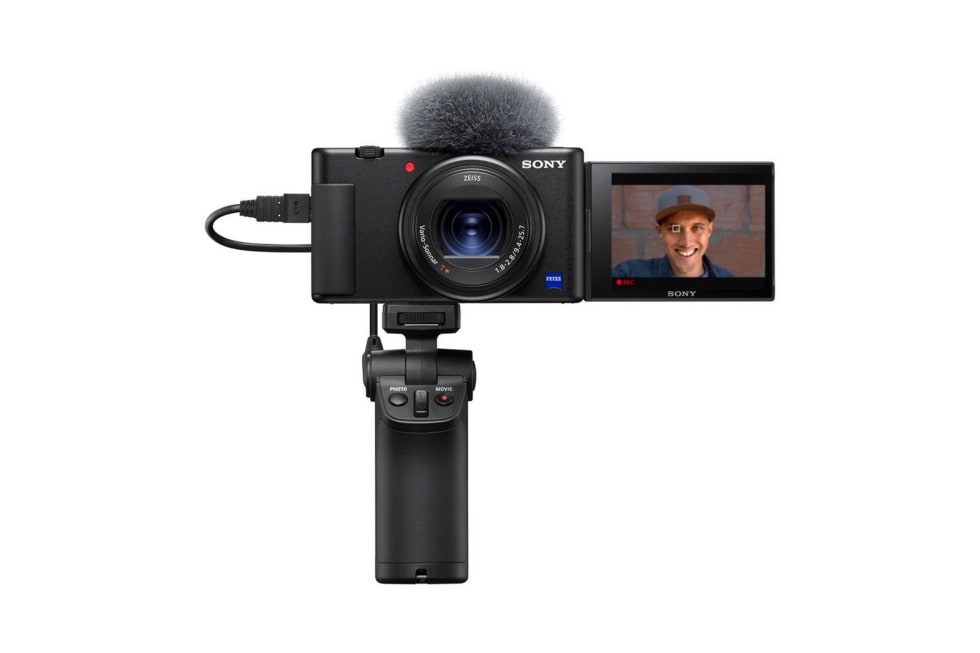 With most cameras, focus will stay persistently on your face with the eye autofocus engaged. However, if you flip on the ZV-1’s “product showcase” setting, it will instantly switch focus from your face to any foreground object, letting you show off products in a YouTube vlog, for example. It also has a “background defocus” function that opens the aperture to its widest setting. Since the camera also has a built-in neutral density filter, you can get shallow depth of focus even in fairly bright light.

Another video-oriented feature is face priority autoexposure. When walking through changing light conditions, the ZV-1 will make sure your face is correctly exposed and ignore everything else. Sony also geared the color science toward faces to deliver more natural results, no matter your skin tone.

The ZV-1 has a built-in 3-capsule microphone with better quality than the built-in mics on any of its mirrorless or DSLR cameras, Sony said. It also comes with a sock to muffle wind noise. If that doesn’t cut enough wind or other noise, it has a built-in noise-reduction setting pulled from Sony’s NR headphones.

That should deliver good enough audio quality for many vloggers, but if not, it has a 3.5mm external microphone port and a multi-interface shoe that supports Sony-branded microphones. It also has a micro-HDMI port, but no headphone jack, as Sony told me that wasn’t a priority feature for vloggers (I’d beg to differ).

The ZV-1 comes with HLG/HDR and S-Log3 and S-Log2 settings, letting you shoot to maximize dynamic range. It doesn’t support 10-bit video, however. It also uses Sony’s image stabilization active mode (optical and electronic), to smooth out any jarring footsteps while you’re vlogging.

Compared to Sony’s RX100 lineup, the ZV-1 is surprisingly inexpensive at launch. It costs $799 (or $749 if you order before June 28th), with shipping starting on June 11th, 2020. You can also get a vlogger accessory kit with the GP-VPT2BT wireless shooting bluetooth grip and a 64GB UHS II memory card for $100 until June 28th, or $150 afterwards.

In this article: 4K, vlogging, video, cameras, ZV-1, eye AF, Sony, RX100 V, compact, news, gear
All products recommended by Engadget are selected by our editorial team, independent of our parent company. Some of our stories include affiliate links. If you buy something through one of these links, we may earn an affiliate commission.