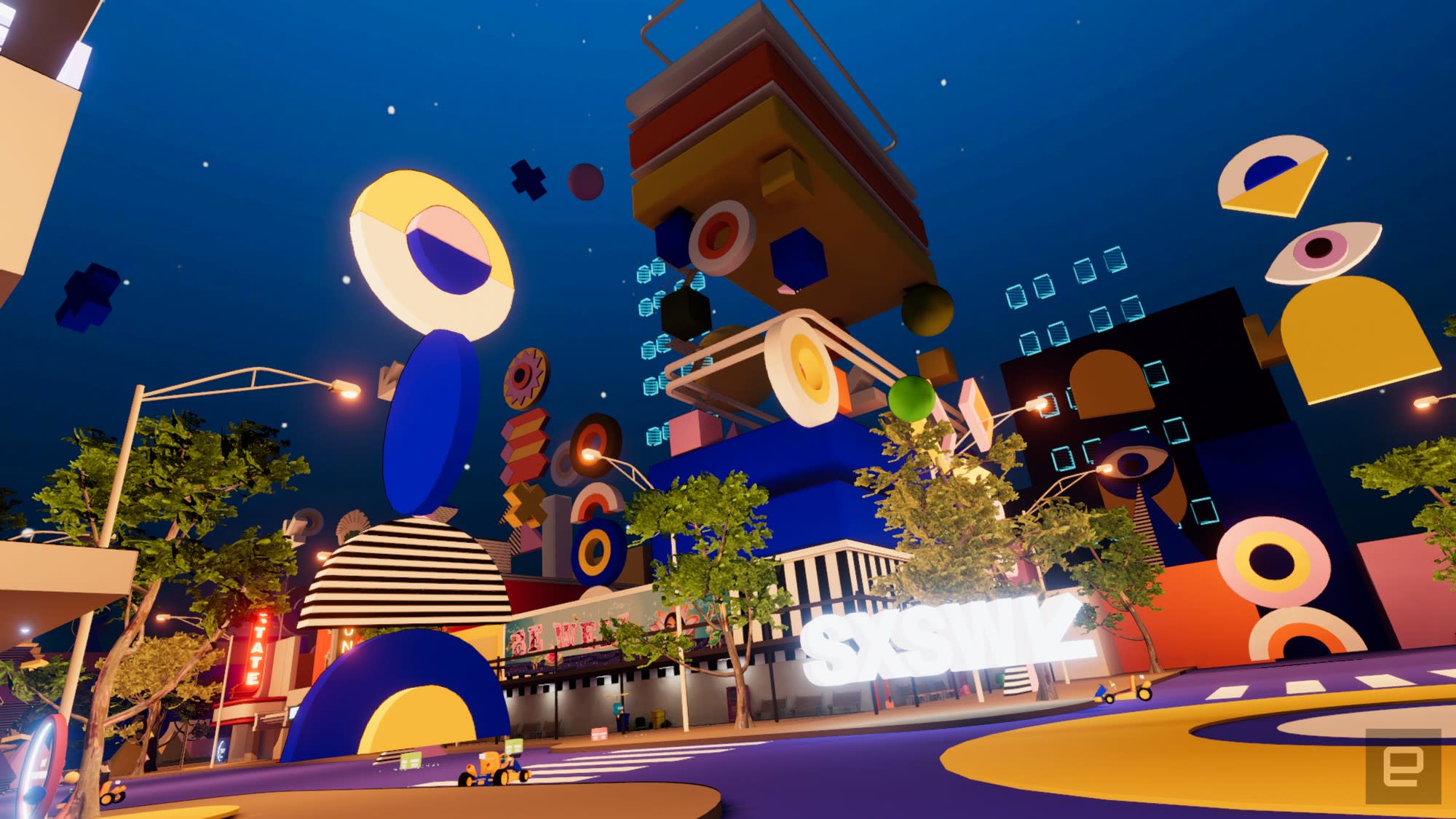 It captured the loneliness of SXSW more than the joy.

One year into the COVID-19 pandemic, with widespread vaccine availability and a return to some semblance of normalcy in sight, film festivals and tech conferences are embracing virtual reality more than ever. At Sundance, we jumped into a custom VR platform to chat with other cinephiles and explore mixed media art projects. Microsoft's recent Ignite conference featured an immersive VR keynote, as well as the debut of Mesh, the company's new platform that could power our future AR/VR meetings.

But as I stood in a VR recreation of Austin's Congress Avenue, the main drag for the iconic SXSW festival, I felt a wave of emotion come over me. It's the best virtual rendition of a conference I've seen yet, but it also felt like an apocalyptic wasteland, one inhabited mainly by digital detritus and brand sponsorships. Virtual reality may be a good stop-gap solution when we can't meet in person, but it's in no way a replacement.

Maybe I was just feeling the effects of my pandemic lockdown anniversary. But as I explored SXSW's VR playground, which let visitors ride go-karts, hop on drones and traverse a variety of venues, I found myself missing the lack of human contact. That may be due in part to the cultural variety at SXSW; it's a film festival, a musical celebration, an art show and a celebration of technology (often overbearingly so). SXSW is a mashup of everything I love in one place: you can go from chatting with filmmakers you admire, to hearing, to bumping into your favorite comedians at a crowded bar. In VR, the magic of SXSW disappears the instant you take off your headset and find yourself back at home.

The social mixed reality company VRrOOm built SXSW's virtual experience atop VRChat, a massively multiplayer game for virtual worlds. Like AltSpaceVR and similar offerings, it lets you customize an avatar (I chose a naked gray alien), and hop into a variety of locations. After befriending a few of the festival's VR admins, I hit a button and was transported right to them at the virtual Congress Avenue. At first glance, it looked like Austin by way of Disney World. I could see the city's iconic locations, like the Paramount Theater and Mohawk bar, but it was all filtered through a neon theme park aesthetic. Visiting those venues was particularly disorienting. The VR Paramount Theater was so accurate, I was able to my usual midnight screening balcony seat.

I'm not going to knock the aesthetic choice, and I think the SXSW team deserves credit for crafting a genuinely immersive VR experience. But the large size of the virtual map may have worked against them. During my visits, I only ever saw a handful of other VR attendees. They rarely stopped to chat. Instead, everyone just wanted to run around and take VR selfies with VRChat's built-in camera. (In that respect, I suppose it's not too different from the real SXSW, which is overstuffed with social media influencers trying to one-up each other with cute pics.)

I imagine SXSW VR would have been more fun if I were hanging out alongside friends. Then it wouldn't just be me riding a go-kart, or checking out a creepy crypto-art museum on my own. The sheer size and scope of SXSW feels a bit isolating even during a normal year, but like many geeky pop culture events, it isn’t that tough to strike up a conversation with a complete stranger as you're stuck in a line together for hours. To be honest, the pandemic has broken me down so much I even miss waiting in those interminable lines. (In 2019, the Engadget crew spent over two hours waiting to get into the premiere for Jordan Peele's Us, only to be turned away when the Paramount reached maximum capacity. It was frustrating at the time, but it sure was a bonding experience!)

Outside of the main SXSW VR environment, I spent some time dabbling in other virtual exhibitions at the show. A few were holdovers from Sundance, but one stood out in particular: Finding Pandora X, an interactive theater performance which already won the 2020 Venice Film Festival's award for best XR experience. Produced by Double Eye Studios, and directed by Kiira Benzing, it puts you in the place of a Greek Chorus member who has to help the last two gods, Zeus and Hera, find the reincarnated form of Pandora. It also takes place in VRChat, but since it relies on live actors, the entire experience feels a bit more immersive than a standard VR film or game.

While I was joined with a handful of other VR attendees, what really makes Finding Pandora X work is the lively performance by the cast and Alyssa Landry's script. My fellow chorus members would occasionally be tasked with shouting a prayer for Pandora, or solving simple puzzles, but I had the most fun watching Jonathan David Martin (Believeand Broadway's War Horse) take on the role of Zeus as a believable pompous blowhard, while Hero (Pamela Winslow Kashani) tried to keep him in check. Finding Pandora X reminded me of a bold and experimental off-Broadway production, the sort of thing I miss dearly these days.

As we move toward normalcy, I still hope these major conferences keep pushing remote opportunities. Just like with Sundance, I genuinely appreciated being able to watch SXSW film premieres and panels in my living room. That infrastructure shouldn’t go to waste, as it opens things up to people who can’t easily travel or afford spending a week in Austin. But I’m also eager to see how SXSW comes back to life next year, perhaps with a smaller in-person offering.

For me, the roaring 2020s will probably be less about partying as hard as I can, and more about being mindful about how I experience everything in person. Give me theaters filled with eager pop culture fans; concerts too loud to hold a conversation; and late-night tacos with friends. Give me something that can’t be simulated in VR — at least, not yet.