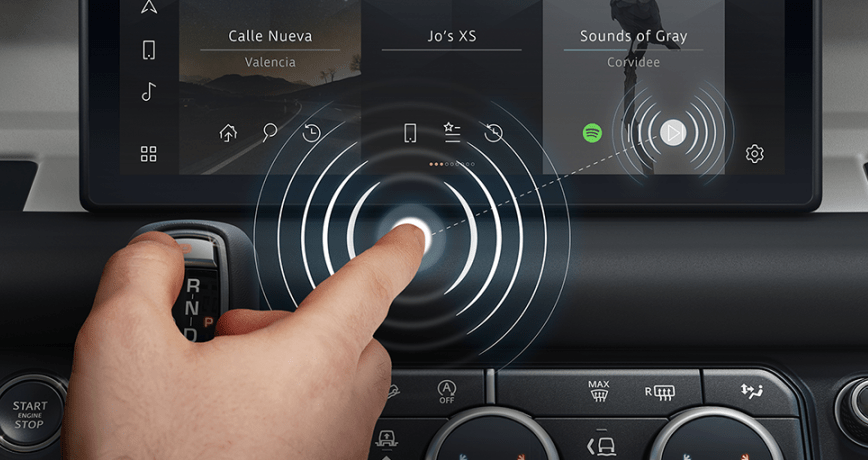 Jaguar Land Rover and Cambridge University have developed a touchscreen system for cars that you don't actually have to touch at all. That might sound odd at first, but touchless technology concepts have been around for at least a decade, and there are plenty of practical applications for this artificial intelligence-powered system.

JLR and Cambridge researchers suggest that the “no-touch touchscreen” (it seriously needs a proper name) would help reduce the spread of pathogens from surfaces, which could prove especially useful in the wake of the COVID-19 pandemic. They said it’d help keep drivers’ attention on the road as well.

A gesture tracker (which uses either vision-based or radio frequency-based sensors) works in concert with other factors, like eye tracking and other contextual information, to figure out which button you want to tap. The "predictive touch" system could come in handy, for instance, when you're on a bumpy road and it's hard to tap the correct part of the screen.

Tests and trials showed the technology could reduce the time and effort it takes a driver to interact with a touchscreen by up to half, the researchers said. They suggested it’d benefit people with a “motor disability which causes a tremor or sudden hand jerks, such as Parkinson’s disease or cerebral palsy” as it’d help them select the right option.

The tech won’t completely negate the driving distraction of looking at a screen, so it can’t entirely address its core intended use case. And how many people are actually using your car’s touchscreen to potentially spread pathogens on it anyway? Still, with more and more cars having touchscreens, reducing the interaction time would help drivers focus more on the road.

The software-based system could be "seamlessly integrated into existing touchscreens and interactive displays," researchers said, as long as those setups have the right sensor data. Beyond cars, the tech could be useful on all types of public touchscreens. It might, for instance, resolve whatever unease people may have right now about using self-checkouts at the grocery store or self-service check-in kiosks at airports. The researchers suggest the tech could also be used for displays without a physical surface, such as holograms or projections.

In this article: coronavirus, covid-19, jaguar land rover, jaguarlandrover, cambridge university, cambridgeuniversity, touchscreen, touchless, transportation, cars, news, tomorrow, gear
All products recommended by Engadget are selected by our editorial team, independent of our parent company. Some of our stories include affiliate links. If you buy something through one of these links, we may earn an affiliate commission.