It took better videos and photos than Samsung’s flagship in the dark.

Ever since Vivo started preaching the virtues of its micro gimbal camera on its APEX 2020 concept phone, I had been keen to try it out myself. In a nutshell, this is OIS (optical image stabilization) on steroids, with the X- and Y-axis tilt angles being three times that of traditional OIS, which should in turn produce stabler videos and sharper photos.

Today, Vivo is finally offering this unique feature to international markets by way of the mid-range X50 Pro, and I’ve been able to put its micro gimbal camera up against Samsung’s flagship Galaxy S20 Ultra, which uses both electronic and optical stabilization for video capture on its main camera. Spoiler: the results are a little surprising.

My comparison focused on the supposed benefits of Vivo’s micro gimbal camera, which means in most cases, it’s the X50 Pro’s 48-megapixel f/1.6 camera versus the S20 Ultra’s beastly 108-megapixel f/1.8 shooter. Coincidentally, both main cameras output 12-megapixel images by way of pixel-binning, except the latter uses 3×3 combos instead of 2x2 to mimic even larger pixels for higher efficiency. The S20 Ultra switches to its 12-megapixel f/2.2 ultra-wide camera for its “super steady” mode, which I’ll talk about as well later.

For the sake of convenience, I mounted both phones side by side onto the same handheld rig, which I used mainly for video shoots and general still shots. For long-exposure shots in the dark, I would hold the phones one at a time instead to ensure maximum handheld stabilization.

Before I headed out, I walked around my apartment with my makeshift rig to get familiar with it, and I also used that opportunity to see how the cameras performed indoors with natural lighting. As I expected, the X50 Pro’s camera had better video stabilization, and as a bonus, it offered more natural colors and better dynamic range.

That said, Vivo’s footage was too soft -- I struggled to make out the titles on my bookshelf even when I went up close. On the other side of the fence, the S20 Ultra did well with sharpness -- it could perhaps even go a little easier on the sharpening, but it was certainly better than the X50 Pro’s, nonetheless.

I made the same observation with the footage I got from walking under the nice weather. The X50 Pro once again beat the S20 Ultra with more realistic colors but fell behind in sharpness. With more background noise present, I started noticing that the X50 Pro had better audio quality as well; the S20 Ultra’s footage sounded muddier and lacked details in the higher frequencies.

Whenever I picked up my pace or made sudden movements, the micro gimbal camera proved its worth by keeping the video steadier than the S20 Ultra’s jumpy video, but it could only handle so much stabilization -- it eventually struggled to keep up when I started sprinting.

This is where the S20 Ultra’s “super steady” mode comes in. Once you toggle this, the camera app switches to the ultra-wide camera, in which it uses purely electronic stabilization and cropping to compensate for extreme movements. In this mode, the S20 Ultra easily tamed the shakiness from my sprinting, with the trade-off being reduced sharpness and slight wobbling from electronic stabilization.

The X50 Pro has a similar mode dubbed “ultra stable,” but rather than switching to its 8-megapixel ultra-wide camera, it continues to use the main camera but with a more powerful electronic stabilization (by increasing the cropping angle). Sadly, this couldn’t cope with my sprinting, and it didn’t seem to make much difference compared to normal mode. Vivo’s product manager admitted that such a mode would be more effective on an ultra-wide camera, which would provide more headspace for cropping, but the team opted for the main camera’s better image quality instead.

Switching back to normal video mode on both phones, I was later surprised that the S20 Ultra managed to have better stabilization than the X50 Pro when I walked down a set of stairs. This is likely because Vivo’s micro gimbal only does dual-axis stabilization, so it lacks the third axis to dampen this particular motion. This just goes to show how far we’ve come with electronic stabilization. But of course, maybe someday a future iteration of the micro gimbal will be able to cover all three axes.

I got to the harbor soon after it went dark, and things got interesting. While the S20 Ultra aced the X50 Pro in terms of sharpness during the day, it was the opposite at night. The Samsung phone applied heavy noise reduction to its night-time footage, so a lot of fine details on both distant skyscrapers and nearby banners were missing. Distortion from Samsung’s stabilization also became more apparent as the surrounding got darker -- the whole footage would shake with almost each step I took.

While the X50 Pro’s night time footage appeared a little darker, it easily beat the S20 Ultra in all other aspects. More details were preserved, colors were more accurate, and stabilization was better. The cleaner audio quality came in as a bonus to better capture the atmosphere of the light and sound show.

I once again switched to “super steady” / “ultra stable” mode on both phones to see how they would perform in the dark. Again, the difference wasn’t apparent on the X50 Pro, but at least the image quality was similar. The S20 Ultra’s footage, on the other hand, was severely under-exposed, to the point where most of the skyscrapers had almost disappeared into the dark. Such is the limitation of the slower f/2.2 ultra-wide camera used in this mode.

I then shifted my focus to still photography, in order to test Vivo’s claims of better low-light shots using the gimbal camera. Indeed, much like the videos, the X50 Pro’s stills produced more accurate colors and preserved more details on the buildings. The S20 Ultra tried to make up ground by artificially sharpening its shots, but you can’t save what’s already lost.

Long exposure is apparently also a strong suit of Vivo’s micro gimbal camera, so I shifted to another location to try some late night street photography. Even with exposures of as long as 0.5 seconds, the X50 Pro still took sharper and more natural images than the S20 Ultra in most occasions. The gimbal camera’s better dynamic range also meant billboards were less washed out in the X50 Pro’s shots. 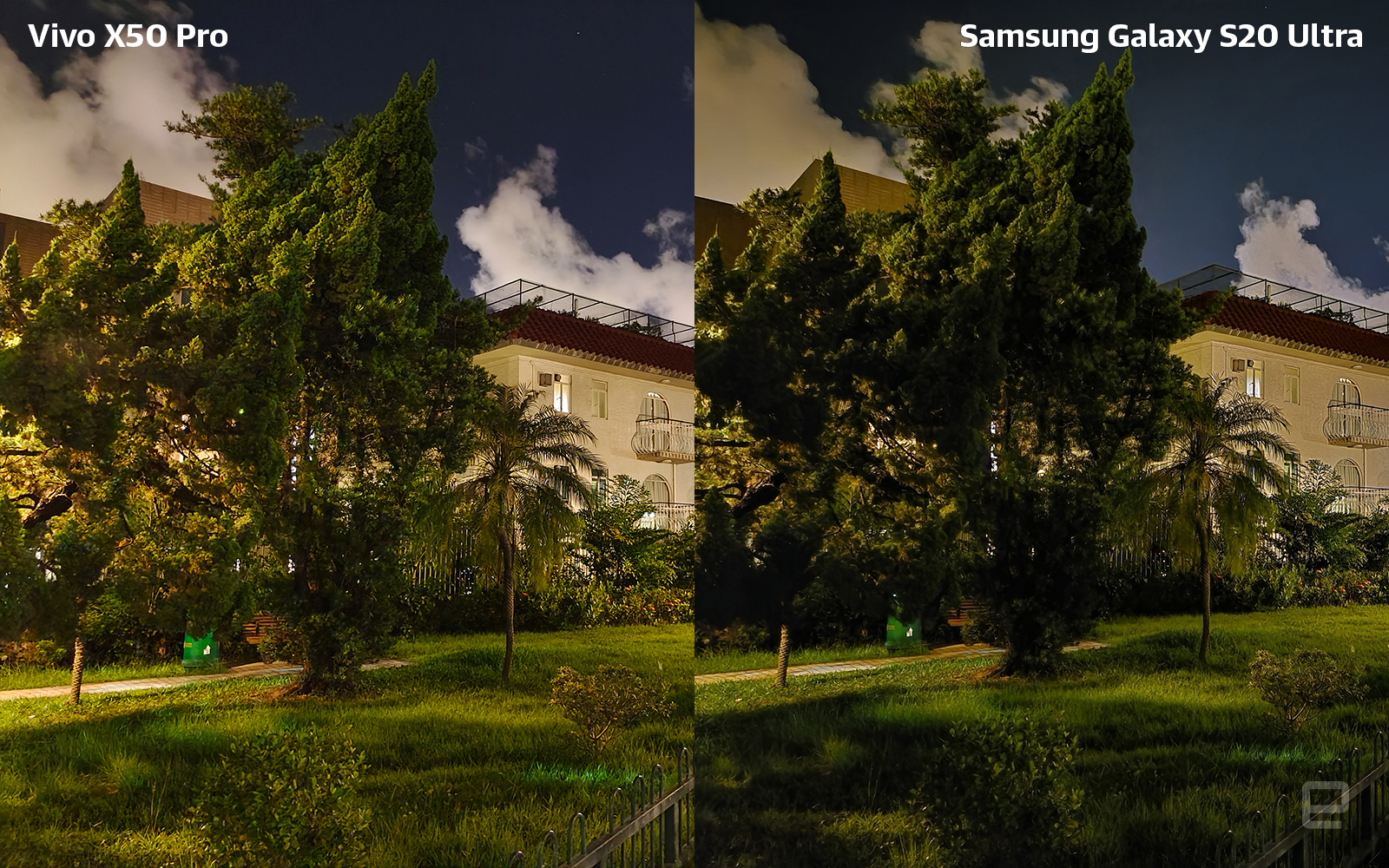 Before calling it a night, I swung by an almost pitch-black garden near home to push the cameras to their limits. With the same 0.5s exposure, the X50 Pro was able to take in more light -- basically matching what I saw with my own eyes. It was also able to keep fine details on trees, and this was most apparent on the spiny leaves. With the S20 Ultra, those leaves were rendered to mush, but to Samsung’s credit, it somehow managed to preserve more detail on distant windows -- likely thanks to its sharpening methods.

This was a perfect spot for me to try night mode on both phones, and Vivo was often the winner. Where the S20 Ultra struggled to capture the shaded parts of a tree, the X50 Pro was able to brighten them up with some details preserved, while applying a more natural sharpness in the overall image. Having said that, there were times when Samsung’s sharpening methods and HDR algorithms helped preserve certain types of details, namely building patterns and signages, but I still preferred the more natural results by Vivo. Simply put, night mode requires a bit of luck on either phone.

Just to cover all bases, I also did a quick comparison with indoor (with natural light) and outdoor stills the next day, and the results were mixed. Earlier I mentioned that the Vivo’s indoor videos were too soft, but its indoor stills actually had the right amount of sharpness. While Samsung’s photos here suffered from a slight over-sharpening, the colors were more accurate, but some might prefer the more vibrant colors -- especially reds and yellows -- from the Vivo in this case.

As for daytime outdoor stills, the X50 Pro had a similar issue as its video capture in terms of detail loss, especially with general sharpness and patterns from bricks and tiles. Vivo also applied a warmer tone to these stills, and I wasn’t a fan of the automatic “Sky” filter which oversaturated the otherwise beautiful blue sky. The S20 Ultra is the clear victor here with its more accurate shots.

It’s safe to say that Vivo’s micro gimbal camera showed off its full potential in low-light environments. While the stabilization benefits applied to video capture during both day and night, the X50 Pro managed to beat the S20 Ultra with sharper and more detailed night shots (along with better audio). Strangely enough, it was the other way round during the day, with the S20 Ultra being the outdoor champion. As for indoor environments with natural lighting, the X50 Pro did slightly better with stills, but it clearly fell behind when it came to videos.

So does Vivo’s micro gimbal camera work? Yes, but obviously with room for improvement -- mainly on the sensor. It appears that despite the supposedly powerful 3x3 pixel binning on Samsung’s massive 108-megapixel chip, it still needs adequate light for image processing, which would explain the S20 Ultra’s better daytime outdoor performance. That’s not to say Vivo’s decision to go with a 48-megapixel sensor here was a bad one; it was a compromise made for the sake of aesthetics.

In an ideal world, it would have been nice for the flagship X50 Pro+ to share its massive 50-megapixel Samsung GN1 sensor with the lesser X50 Pro, as the large 1.2um pixels would significantly boost sensitivity -- it’s a big jump from 0.8um on the Pro’s Sony IMX598. But Vivo’s product manager pointed out that the Pro+’s camera module is already at around 9mm thick (whereas the Pro’s body is only 8.04mm thick), and by fitting the massive GN1 into a micro gimbal structure, “the thickness would be beyond our imagination.” Perhaps it would be interesting to see the Pro and Pro+ going head to head with their main cameras, but my guess is the Pro’s micro gimbal would still bring better stabilization, regardless.

For those who are interested in getting hold of an X50 Pro, chances are you’ll have to import one yourself. Vivo announced today that it is rolling out this phone (along with the more affordable X50 and the TWS Earphone Neo) to major markets in Eastern Europe (Russia, Ukraine and Kazakhstan), Middle East, Africa and APAC (India, Indonesia and more) over the next three months, but it currently has no plans to bring it to the US. Well, at least this is an international model, so you wouldn't have to fiddle with Chinese firmware to add Google services. For reference, the Chinese version starts at 4,298 yuan which is about $610.