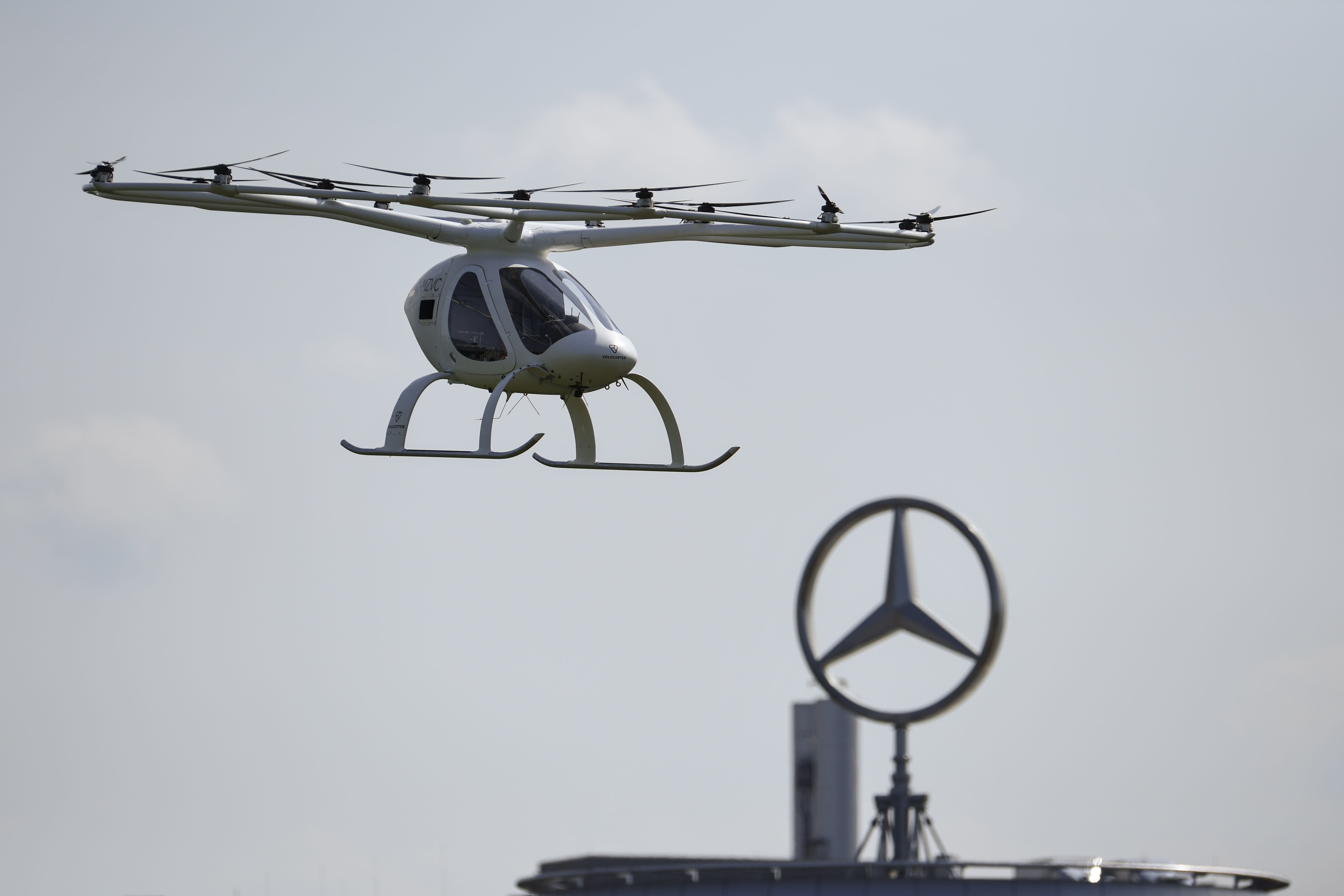 We won't have electric airplanes until battery tech improves

They're still too heavy and underpowered to make electrified air travel feasible.

Today’s commercial airliners are not exactly fuel efficient. The average 747, for example, burns through a gallon of kerosene-based fuel every second that it flies. And with 8.2 billion people expected to take to the skies annually by 2037, carbon-free alternatives to Jet A-1 will be necessary in order to offset the industry’s impact on global warming. We are nearing the age of electric airplanes.

Pioneering researchers, scientists and entrepreneurs have been working on the dream of electrified flight since the latter part of the 19th century when heavy lead-acid batteries were loaded onto early airships to power their propellers. We’ve also seen a number of, ahem, novel means of powering aircraft while in-flight throughout the years, from conductive tethers stretching back down to the ground to solar panels to microwave energy transmission but it wasn’t until the advent of relatively more power-dense Nickel-cadmium (NiCad) battery technology that human-scale free-flying electric planes became technically feasible.

But even as battery chemistries have evolved and energy densities have risen over the past few decades, today’s state of the art Lithium-ion cells pose the same quandry to the aviation industry as they do to the automotive: how to properly balance the energy-to-weight ratio of their batteries.

“If a jumbo jet were to use today’s batteries, 1.2 million pounds of batteries would be required just to generate the power of the jet engine it would be replacing,” University of Houston Energy Fellow, Emily Pickrell, opined in Forbes earlier this year. “This weight would effectively need an additional eight jet planes just to carry that weight!"

And as Li-ion technology has fully matured, further increases to its energy density have fallen to below five percent with each annual iteration, which is why a number of researchers and battery companies are already looking for the next breakthrough battery chemistry — whether that’s Sodium-ion (Na-ion), Lithium-metal (Li-metal), Lithium-Sulphur (Li-S), or Zinc-air (Zn-air).

Regardless of composition, batteries need to get a whole lot lighter and more energy dense if they’re going to attack and dethrone jet fuel which, with an energy density of 9.6 kWh/L, makes the flammable liquid about 50 times as energy dense as today’s best li-ions. To be fair though, due to inefficiencies inherent to internal combustion engines, that figure drops to around 14 times the energy density of a li-ion battery if you’re comparing equal weights of fuel and batteries.

For example, a Tesla Model 3’s li-ion-based battery boasts an energy density of 260 Wh/kg while CATL announced earlier this year that it had built a sodium-ion battery with 160 Wh/kg density (though it hopes to get that up to 200 Wh/kg by 2023). Lithium-sulfur batteries have shown the capacity to hold up to 600 Wh/kg, though that technology faces significant longevity hurdles (i.e. the chemistry tends to eat through electrodes) before they can be widely used. Currently, 2- and 4-person small aircraft outfitted with electric power systems typically operate at 250-270 Wh/kg of specific energy but industry experts expect energy densities will have to hit 350 - 400 Wh/kg before the electric aviation industry really takes off — something that could happen within the next few years, according to Tesla CEO, Elon Musk.

Preventing and mitigating thermal runaway is another critical test for electric aviation. When a battery cell, or even an area within a single cell, malfunctions due to mechanical, thermal, or electrochemical failure, its temperature can rise beyond safe levels causing the cell to first produce lithium off-gasses, causing the cell walls to bulge, then rupture, releasing the entirety of its energy reserve. When a cell bursts it can damage and overheat surrounding cells, setting off a cascading failure that results in explosion and fire. When that happens to a Chevy Volt, the car will likely be a write off (fingers crossed it didn’t also set your house on fire) but if such a failure were to occur in-flight on an electrified 747, the loss of life would be catastrophic.

To minimize the chances of a full-blown runaway from occurring, early detection of cell failures is key. As off-gassing typically occurs minutes before a cell ruptures, the presence of a monitoring system which compares sensors positioned close to a li-ion battery against those collected by a reference sensor further away can alert for the presence of a failing cell. And to negate any gases that have already been released, fire suppression systems armed with inert gas — to prevent the offgasses from reaching combustible levels when mixed with atmospheric oxygen — can be employed as well. Of course regular maintenance and robust inspections also help prevent cell failures before the situation becomes explosive.

Battery electric planes will also provide unique challenges in balancing air speed and range, though for Rolls-Royce, it’s not even a question — speed all the way. Over the past few years, Rolls-Royce has been quietly working on Project ACCEL (accelerating electrification of flight), building a battery-powered racing plane, dubbed Spirit of Innovation, in an effort to set a new world air speed record.

The record was previously set in 2017 when an electric-powered Extra 330LE, using a Siemens eAircraft-built power plant, notched a 209.7 mph (337.5 kph) top speed over a 3-kilometer-long course. The feat was certified by the World Air Sports Federation (FAI) as the fastest electrically powered flight by an aircraft weighing less than 1,000 kg at takeoff, beating the previous record (set in 2013) by just over 8 mph (13 kph).

In addition to the 3-kilometer record, Rolls-Royce has the opportunity to also set FAI records for a 15km distance and “time to altitude,” basically how quickly the plane can take off and reach a specific height. “It needs to be a significant number,” Rolls-Royce Director of Engineering and Technology – Civil Aerospace, Simon Burr, told Aerosociety. “We’re planning to fly over 300mph. We’ll see how high we can get to.”

For its attempt, Rolls-Royce — which is partnering with the UK’s YASA electric motor manufacturer and start-up Electroflight, which makes bespoke battery systems — has acquired a pair of Sharp Nemesis NXT twin-seat air racers. One has been used for ground testing while the second will conduct the actual flights. The Nemesis NXT already holds the 3km FAI record with a recorded top speed of 415mph (667.8km) using a 400hp Lycoming internal combustion engine.

The Rolls-Royce team has swapped that Lycoming engine out for a trio of YASA 750v electric motors producing around 400kW (530hp) while the fuel tank has been replaced with three independent battery packs.

“The main challenge of electrification is weight,” Rolls-Royce Flight Test Engineer Andy Roberts said during a September media briefing. Not only did the 6,000-cell battery system aboard the Nemesis NXT shift the aircraft’s center of balance, the 450kg battery system also doesn't get lighter over time as conventional fuel tanks would, which could impact the plane’s performance during the later stages of the run. The batteries are so substantial that Rolls-Royce Chief Test Pilot Phill O’Dell had to lose 2kg of bodyweight to help keep the overall aircraft weight within operating margins.

Thermal runaway is a very real concern for the Rolls-Royce team, as they’ll be pushing these batteries to their absolute limits during the flight. In order to mitigate this issue cells are separated by liquid-cooling plates and stored in cork-wrapped fireproof cases (the porous cork material helps diffuse heat). Should a cell overheat to the point of venting off-gasses, the plane is equipped with an inert gas suppression and ventilation system as well.

On September 15th, the Spirit of Innovation made its maiden test flight from the UK Ministry of Defence’s Boscombe Down airfield, flying for 15 minutes. The company hopes to have the Nemesis ready for an official run at the record before the end of this year.

“The first flight of the Spirit of Innovation is a great achievement... We are focused on producing the technology breakthroughs society needs to decarbonize transport across air, land and sea, and capture the economic opportunity of the transition to net zero,” Warren East, Rolls-Royce CEO, said in a statement. “This is not only about breaking a world record; the advanced battery and propulsion technology developed for this programme has exciting applications for the Urban Air Mobility market.”

Rolls-Royce is far from the only company pursuing electric aircraft technology, no matter how much faster it is than the competition. From tiny startups to industry stalwarts — even NASA — companies and governments around the world are racing to develop commercially viable electric aircraft both for passenger flights and cargo hauling.

Bye Aerospace, for example, builds electrified 2-seat trainer planes called the eFlyer, similar in function to Diamond Aircraft’s eAircraft. Slovenian aircraft manufacturer Pipistrel has been selling its $140,000 Alpha Electro, the first electric plane to earn FAA certification, since 2018. On the other end of the spectrum you have aerospace giants like Airbus developing the Air Race E, which the company claims is the world’s first all-electric air race series when it starts up later this year (better get with the times, Red Bull Air Race), and demonstrators like the City Airbus, a 4-seat eVTOL. These electric vertical take off and landing capable vehicles have become a popular option for fossil fuel-free air travel, such as Cadillac’s single-seater concept, the build-it-yourself Jetson Aero, China's EHang AAV, Uber’s since-abandoned air taxi scheme or Volocopter’s ongoing air taxi scheme.

Unfortunately, despite all the research into and hype surrounding electrified air travel, many industry experts remain skeptical that we’ll see its widespread adoption for at least a few more decades — at least for large-scale airframes like the Boeing 787 or Airbus A350. Until battery technologies become sufficiently robust, we’ll most likely see eVTOLS restricted to short-hop intracity duties for the foreseeable future, eventually expanding out to inter-city jaunts and regional commuter jets. Still, it beats sitting in traffic.