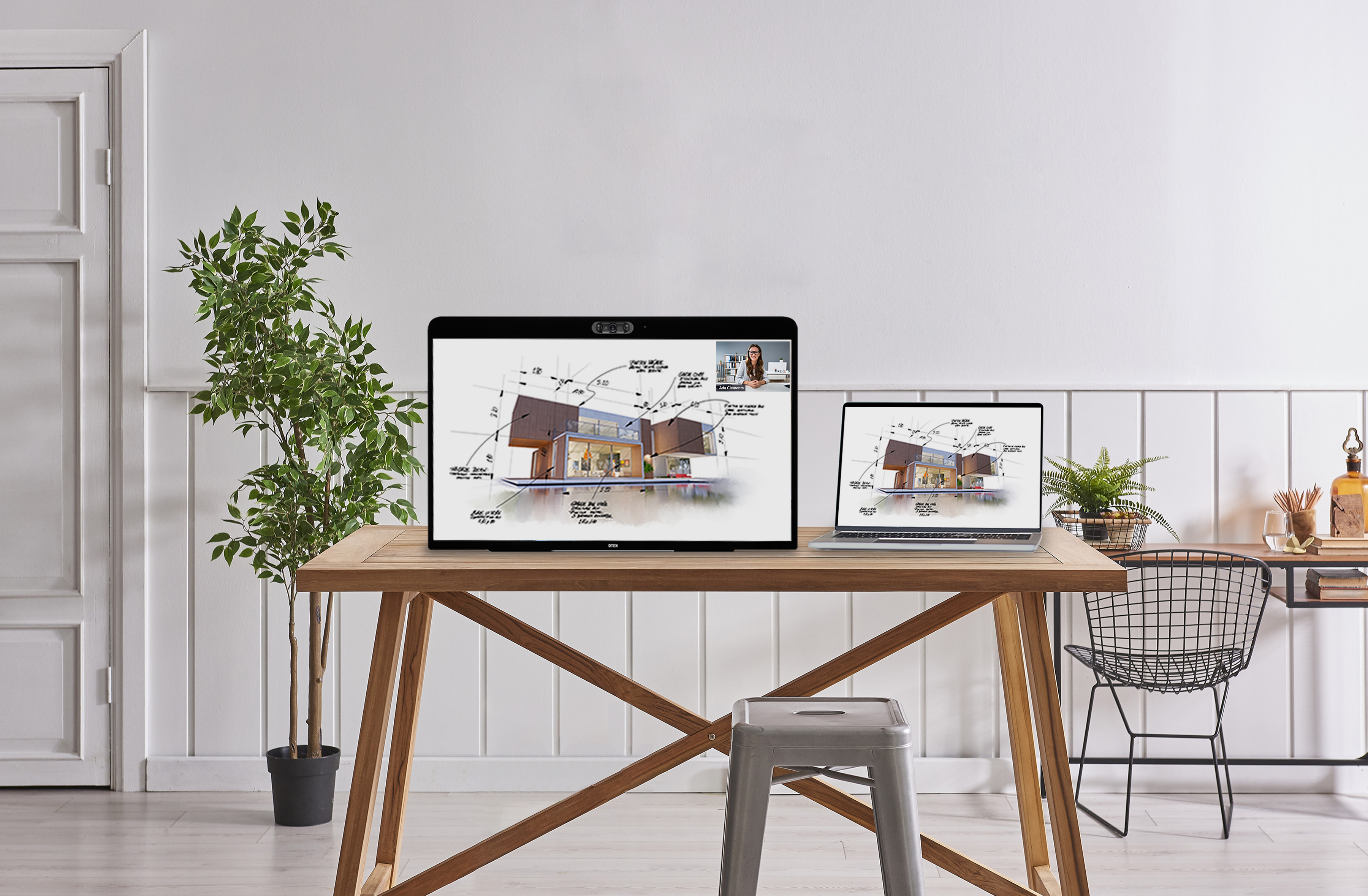 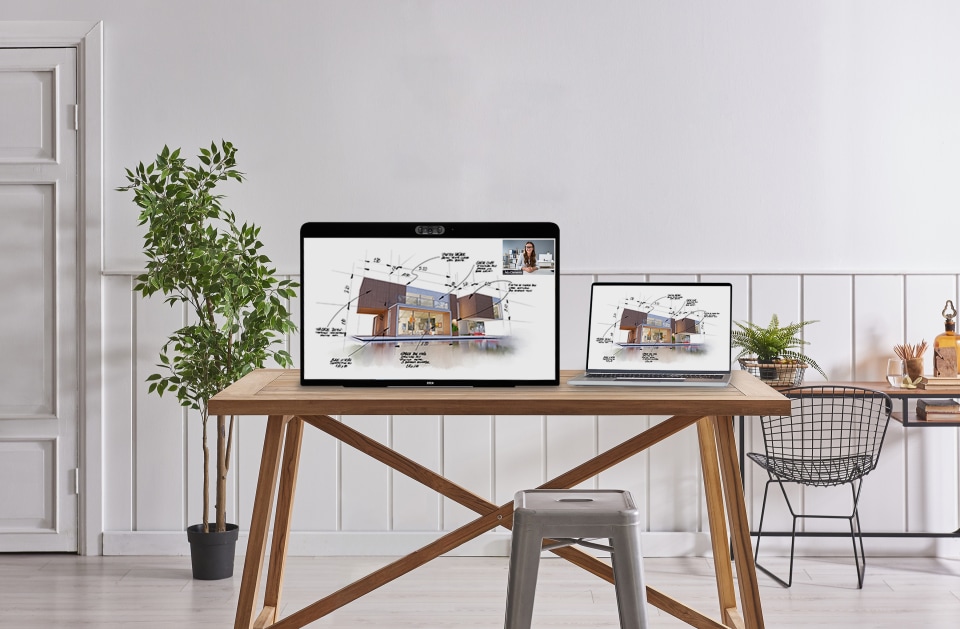 One of the biggest success stories to come out of this pandemic is the video-conferencing company Zoom. As many of us transitioned to working from home, Zoom saw its user base grow exponentially. According to a recent earnings report, it went from 10 million daily users in December 2019 to over 300 million in April 2020. Now, the company is ready to make its next move. It’s announcing a new category of products called “Zoom for Home,” which consists of both a software interface as well as a line of hardware devices made specifically for the work-from-home crowd. And, while it’s designed mostly for business professionals, there’s no reason why everyday consumers can’t use it as well.

To be clear, Zoom isn’t making the hardware; it’s partnered with third-party manufacturers. The very first Zoom for Home product is the result of a collaboration with DTEN, a company that typically makes products for conference rooms. It’s called the Zoom for Home DTEN ME and, at 27-inches wide, it really does seem like a scaled-down version of the typical video conference hardware you often find in offices. The all-in-one device comes with three built-in wide-angle cameras, an 8-microphone array and a touch screen display that you can use for presentations, whiteboarding and annotation. Think of it as a smart display, but in a more professional setting.

“The hardware has to be an all-in-one thing, without a lot of assembly,” said Jeff Smith, the head of Zoom Rooms, the company’s conferencing room system (To be clear, the Zoom for Home product is not the same as Zoom Rooms, which is a separate subscription-based product made just for office conference rooms). Smith contrasts that to other enterprise-level setups that often require multiple pieces of hardware like separate cameras, soundbars and monitors. Though it’s not specifically made for consumers, the Zoom for Home hardware is definitely designed to be user-friendly.

As for setup and installation, that varies a little depending on your organization. If you work in a corporate setting for example, then your IT group could mostly set it up for you. When you receive the hardware at home, you can plug it in, enter in a few details about your local WiFi network, sign-in and you’re ready to go, with all of your Zoom settings and calendars synced up. The IT manager would then be able to manage the software versions and control some of the settings remotely.

If you work for yourself or if you’re in the consumer/prosumer category, the process is relatively simple, too, but with a few extra steps. You’d have to sync the calendars on your own, for example, and configure the settings yourself, but Smith said none of it requires deep technical knowledge.

Another key differentiator between the Zoom for Home product and the typical conferencing room system is the interface. For one thing, conferencing room software is designed to be shared with multiple people, Smith said, while claiming Zoom for Home is highly personalized. Additionally, anyone with a Zoom account can use Zoom for Home; you don’t need to have a paid subscription or a Zoom Meeting license. Even those with a Basic (free) Zoom account can use it.

When you log in to a Zoom for Home device, you’ll see your profile picture on the upper left corner, indicating that it’s your account. It’ll automatically sync with your calendar, so you can see a list of your upcoming appointments right on the screen. Your contacts are synced as well, of which you can configure a set of “favorites” for the people you chat with most often. Plus, since the Zoom for Home device could be used in a family environment, it also has a lock with PIN code feature, so that your kids can’t go messing around with it.

Last but not least, one of the key requirements of Zoom for Home products is that it should be affordable. “You can’t have a $10,000 workstation for each employee,” said Smith. Instead, the Zoom for Home DTEN ME is priced at around $599. Though that’s more expensive than even the higher-end consumer smart displays -- the Google Nest Hub Max is $229, the 10-inch Echo Show is also $229 retail (currently $180), and the large Portal+ is $279 -- the DTEN ME is also significantly bigger at 27-inches wide, plus it has the aforementioned multiple cameras, microphones and a touch-screen interface. It’s not inexpensive of course, and one could argue that using a laptop would probably suffice for most people. But if you spend most of your day on video conferences, then a dedicated device for it might make more sense.

Plus, the Zoom for Home system shouldn’t really be seen as a smart display. It lacks some of the more consumer-focused features like YouTube, weather, smart home controls and photo album integrations. It also doesn’t have voice commands like Google Assistant or Alexa. Instead, Zoom for Home is very much geared towards video-conferencing and not much else.

But that doesn’t mean it’s only for work. As even Smith admits, people are now using Zoom for far more than just meetings. They’re used for fitness classes or virtual happy hours or hanging out with friends. And there’s no reason Zoom for Home can’t be used for that too. You could potentially have it set up in your living room instead of the office.

“From a messaging and position perspective, Zoom for Home is very much work-first,” Smith said. “But, you know, Zoom as a platform is being stretched to a lot of different use cases. Last year, I would have never imagined a fitness instructor using Zoom. But now, there are all kinds of uses, and they’re all very applicable to Zoom for Home as well.”

Zoom is planning on incorporating additional features to its hardware later on. For example, Smith said that the face-tracking tech that is on the Portal and Nest Hub Max could eventually arrive on the Zoom devices. “There are a lot of smart camera features that are on this particular product roadmap, and we absolutely have that in mind,” he said.

The Zoom for Home DTEN ME is available for pre-order now, and is expected to ship in August this year.

In this article: dten me, dten, zoom, news, gear
All products recommended by Engadget are selected by our editorial team, independent of our parent company. Some of our stories include affiliate links. If you buy something through one of these links, we may earn an affiliate commission.