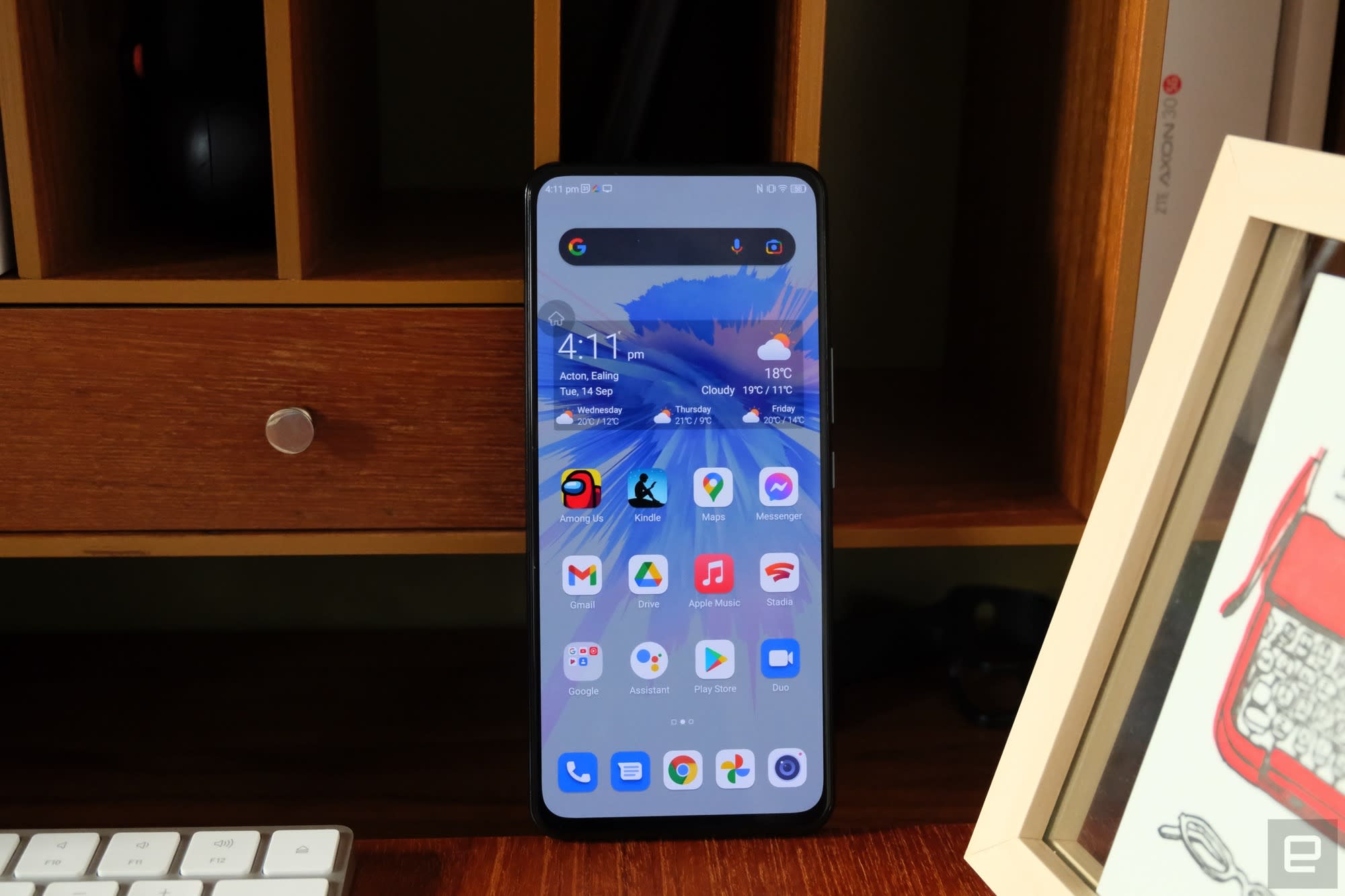 Shame about the selfies.

ZTE’s family of devices is a little confusing at the moment. The Axon 30 is a direct sequel to the Axon 20, which was the first phone to feature an in-screen camera. However, the company has subsequently released the Axon 30 Pro and Ultra in some territories. So, weirdly, the vanilla Axon 30 is the last of the Axon 30 family to appear.

At $500, it’s also the cheapest — another attempt by ZTE to slide underneath the priciest smartphones around and offer a mixture of compelling features, albeit tempered by some compromises. The Axon 30’s headline feature is a much-improved under-display camera (UDC), which is almost invisible. It’s also a ZTE smartphone that’s launching in the US, which doesn’t always happen.

But with increasingly strong midrange phone competition from the likes of Samsung, OnePlus and Google, does ZTE’s Axon 30 offer more than just a hidden selfie camera?

So what’s all the fuss about that camera anyway? Well, the under-screen 16-megapixel selfie shooter on the $500 Axon 30 puts the one on Samsung’s Galaxy Z Fold 3 to shame. ZTE’s implementation is imperceptible unless you really, really look for it. No punch hole, no notch, no pop-up camera.

In comparison, the Fold 3’s selfie cam has a pixelated effect that signposts where the camera is and ruins the whole effect. (Yes, in Samsung’s defense, there’s another front-facing camera on the Fold 3 when it’s closed and you’re using the smaller screen.)

The difference seems to be pixel density, or according to ZTE, the composition of them, with a “special pixel matrix” that ensures the screen appears at 400 PPI — double that found on the Axon 20. If the light catches the unit just right, then yes, you can see it. You’ll probably never notice it again.

There’s also a dedicated UDC chip that apparently works to keep the camera area looking consistent with the rest of the screen. To get a closer look, I used Oppo’s Find X3 Pro, which has a microscope phone camera — perfect for visually explaining what could otherwise get very technical.

As you can see, some pixels seem slightly smaller, or dimmer, than those surrounding them. In this close up you can see the outline of the UDC area, but at this magnification, it’s impressive that it doesn’t look more out of place. I’ll touch on the camera’s performance later, but spoiler: While it might look the part, it’s not quite capable enough.

The hidden sensor also complements the expansive 6.92-inch AMOLED screen, uninterrupted by the presence of any camera notches or holes. With a 2,460 x 1,080 resolution panel and 120Hz refresh rate, the Axon 30 is offering a flagship screen for mid-range prices. You can switch between 120 and 60Hz modes, with an automatic option letting the Axon 30 decide when to increase the frequency. On more expensive phones, like the OnePlus 9 Pro and the recently-announced iPhone Pro 13, there are more refresh rate options that dip even lower, but at this price, this seems like a fair compromise.

Leaving it on auto is probably the best fit for most folks, but the manual options are nice — especially as there seems to be a tangible battery life benefit to the lower setting.

The phone itself is pretty big but feels solid despite its plastic back. ZTE added a translucent reflective effect across the rear of the Axon 30, which I like. I’m less enamored with the giant camera unit, however, which protrudes a few millimeters from the phone, and is likely to be more easily dinged and scratched. Sadly, this design is now everywhere.

The screen might be comparable to a high-end phone, but there are some features that didn’t make the cut at this price, like wireless charging and certified resistance against dust and water.

There are further compromises. The Axon 30 is powered by Qualcomm’s Snapdragon 870 processor — which is a little underpowered compared to the Snapdragon 880 and 880 Plus we’re seeing in flagship Android smartphones now.

But at $500, phones like the Pixel 5a (and its Snapdragon 765G chip) are a better comparison to make. The Axon 30 has a more powerful chip than Google’s latest device, though it’s hard to notice a difference in performance between the two.

The Axon 30 handled everything I threw at it, whether that was video streaming, Stadia or playing games on the phone itself. (The Stadia app did flag that the phone wasn’t officially supported, although it worked fine for me.) There was some visible slowdown when recording video at full 4K resolution, and hopping into the gallery, but otherwise, I didn’t have many complaints.

I also have to mention that the Axon 30 isn’t exactly great for 5G support in the US. It only works on T-Mobile’s midband 5G. If you’re on Verizon or AT&T, you’ll be relegated to 4G.

ZTE does know what it’s doing with smartphone power, though. The phone has a 4,200mAh battery that, when I turned the 120Hz refresh rate off, lasted a good two days of typical use before I needed to recharge. And when I did need to, it took hardly any time.

The Axon 30 supports incredibly fast charging speeds of up to 65W with the appropriate charger, which (thankfully) the phone comes with. ZTE estimates it can charge the phone to 100 percent in under an hour, but getting to 50 percent takes proportionately less time — around 20 minutes.

Software is pretty innocuous, which is generally a good thing. ZTE keeps pretty close to the stock Google experience. Its new MyOS 11 skin, based on Android 11, is pretty close to what you’d find on a Pixel. There are a few gesture quirks (shake the Axon 30 for the flashlight!) and a floating shortcut widget that can be minimized to the edges of the screen. It’s similar to Samsung’s Edge panel on its bigger phones. ZTE’s version is called Z-Pop and you can tweak the four shortcuts for system commands and app switching. That said, it’s not something that makes you think “Mmm what a memorable experience this is.”

While the front-facing 16-megapixel camera is technically impressive, it doesn’t take great selfies. Don’t get me wrong, it shoots far better pics than the UDC on both Samsung’s Galaxy Z Fold 3 and the Axon 20. The work done to pixel-bin for low light performance, as well as algorithms to help the camera ‘see’ through the AMOLED panel make this the best UDC so far. But it still offers up middling to poor photos. It’s a bit of a time warp, to be honest, giving me the kind of pictures I used to get on smartphones years ago. Details are fuzzy, and any strong backlighting leads to lens flares and washout.

There’s also an AI assist mode that doesn’t seem to help much — if anything, modes like brightness seem to wash out skin tones even further, and they’re a little gray to begin with. Even if you turn this off, images seem pretty unnatural.

It does still capture enough detail to offer face unlock functionality if you prefer that method to fingerprint unlock. And yes, there’s also a fingerprint reader built into the screen. Face unlock worked fine for me nine times out of ten, and was plenty fast enough, but I used a combination of the two. Fingerprint unlock seemed more reliable in darker environments.

But what about the rest of the cameras? On the back, the Axon 30 has a four-camera array, led by a 64-megapixel Sony sensor. While you’ll mostly be taking pictures that fuse a lot of these pixels together for less noise and better performance in low-light, ZTE has kept the ability to take full-resolution stills if you want to. There’s also an 8-megapixel wide-angle camera, a 5-megapixel macro camera and finally, a 2-megapixel depth sensor to aid your bokeh photography efforts and help with focus. You get up to 2x optical zoom, which is what you’d generally expect at this price point.

While shooting pictures with the Axon 30 during a family event, images of friends and family seemed particularly good. There is a softness to some shots, likely due to the photos being shrunk down from the 64-megapixel original, but the phone was able to handle most things I threw at it.

There’s a night mode — of course — but the Axon 30 takes pretty functional shots in low light without having to resort to using it. It did help further reduce noise and improve detail a little, but I’d also advise testing shots with AI mode on and off, as sometimes I found it meddled a little too heavily, especially with people as subjects.

And the macro camera isn’t worth your time. I suggest using the primary camera with zoom for generally better results in most situations. The problem with the macro camera seems to be that the phone has to be so close to the subject that it blocks a lot of light. That’s not great for detail-oriented photography.

Video camera modes are generally the same across most mid-range phones in recent years, and the Axon 30 isn’t hugely different. It can handle up to 4K at 60fps and a multi-camera mode lets you record from both the wide-angle and the primary camera at the same time, which is a nice trick we’ve occasionally seen on flagship phones. Due to sluggish autofocus, however, the recording quality isn’t great. If you’ve got a stable subject and good light, videos will generally come out nicely. At other times, you’ll struggle to record anything functional. Just because a phone can record 4K, it doesn’t mean you should.

With the Axon 30, ZTE has proved it can successfully camouflage its under-display camera. But that doesn’t mean it’s up to the task. Image quality from the secretive selfie lens really isn’t good enough, even if the implementation is impressive. Aside from that, the Axon 30 has a gorgeous, fluid screen and a decent rear camera setup. The lack of wider 5G support in the US is frustrating in a 2021 phone, but there is still a lot here for $500. The bigger challenge is that competition is tough in the middleweight phone arena. Google’s latest Pixel, the 5a, rings in at $450, and offers better-performing cameras, front and back. If you’re struggling to pick between the two, the decision loosely boils down to a bigger screen or better selfies.