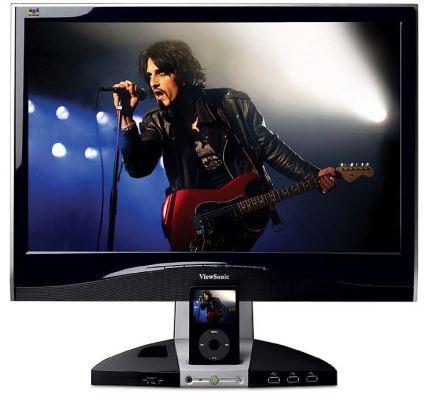 We can't say with absolute certainty that every single device type known to man has now been outfitted or retrofitted with an iPod dock, but we sure are getting pretty dang close. ViewSonic's new ViewDock display series brings the iPod to your LCD, allowing you to view video, photos and those oh-so-cute menus at up to 65 times larger than an iPod screen. The displays also feature multiple USB 2.0 ports, an 8-in-1 card reader, a microphone, integrated speakers and a subwoofer to really bring the convergence. Of course, the average computer has most of those features already, along with copies of your iPod media if you're docking at your traditional computer, but what's the fun in that? We're otherwise slim on details for the new displays, with ViewSonic merely claiming "ultra-fast" response times, "high" brightness and contrast ratios and "wide" viewing angles. We've also yet to find a pic of these ViewDocks, but we'll be sure to update when we find one.

[Pic courtesy of bit-tech, thanks Ben D.]
In this article: ipod, ipod dock, ipod video, IpodDock, IpodVideo, portable audio, portable video, portableaudio, portablevideo, viewdock, viewsonic
All products recommended by Engadget are selected by our editorial team, independent of our parent company. Some of our stories include affiliate links. If you buy something through one of these links, we may earn an affiliate commission.
Share
Tweet
Share