Caltrain will finally go electric thanks to FTA funding 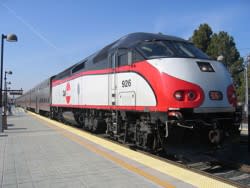 WiFi trains aren't anything new, and even WiMAX has made an appearance across the pond, bringing sweet, sweet Internets to those lucky commuters. Well now we're getting our own taste of the action, and the specs couldn't be sexier. The Caltrain commuter rail service has hooked up 16 miles of their track between Millbrae and Palo Alto, using WiMAX backbone from Redline, connectivity from Nomad and in-train WiFi routers from Sensoria to provide speedy connections to commuters while traveling at 79 mph. Tests of the system seemed to work dandy, with several commuters watching streamed video, pulling large file downloads and even answering email simultaneously. Now that the tech has been successfully demonstrated, they're planning on building it out across the rest of their line. The future is indeed nigh.

In this article: caltrain, nomad, redline, sensoria, train, wifi, wimax
All products recommended by Engadget are selected by our editorial team, independent of our parent company. Some of our stories include affiliate links. If you buy something through one of these links, we may earn an affiliate commission.
Share
Tweet
Share
Save