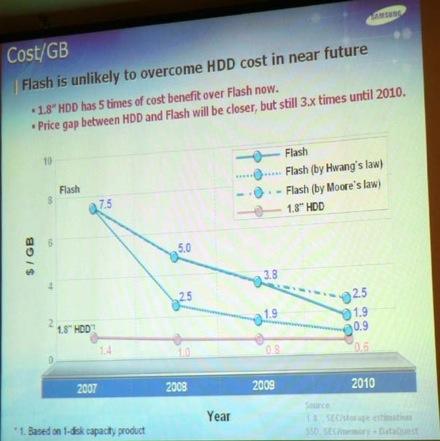 So in addition to dropping a couple of high-capacity disks this morning, Samsung also gave us some interesting (albeit, depressing) insight into their thoughts on Solid State Disk penetration at a session on SSD vs. hard drives at a product conference in Japan. Big stuff when you consider Samsung's pioneering role to supplant traditional 1.8-inch hard disk drives with flash-lovin' SSDs. We've already heard from Sandisk that SSD prices should fall by about 60% annually. Nice, but SSDs are currently 5x the cost of their mechanical brethren: $7.5/GB compared to $1.4/GB for HDDs. Even by 2010, Samsung (backed by DataQuest research) still estimates at least a 3.x gap: $1.9/GB for SSDs vs $0.9/GB for HDDs according to Hwang's law. In other words, we'll be paying a significant premium for flash memory's lickity quick boots and greater reliability long into the future. Still, a 128GB SSD for $243? Give us two, please.
In this article: 1.8-inch, dataquest, flash, hard disk drive, HardDiskDrive, hdd, nand, samsung, ssd
All products recommended by Engadget are selected by our editorial team, independent of our parent company. Some of our stories include affiliate links. If you buy something through one of these links, we may earn an affiliate commission.
Share
Tweet
Share