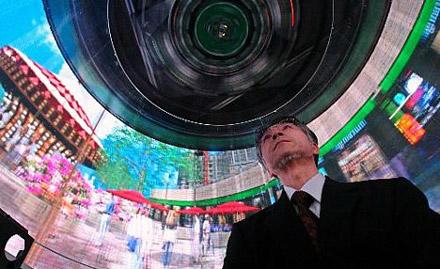 In a device eerily akin to teleportation machines seen in major motion pictures (seriously, check it after the break), the Telexistence Wide-angle Immersive STEReoscope aims to "immerse viewers in a 3D video environment" sans those pesky goggles. Developed by a team at the University of Toyko, TWISTER is being hailed as the "world's first full-color 360-degree 3D display that does not require viewers to wear special glasses," and it's finally coming together after a decade of work. Within the cylindrical, rotating device, you'll find some 50,000 LEDs that give off the illusion of a three-dimensional object without any ocular aids. Moreover, the team is already looking into the possibility of adding 3D videophone technology to spruce up video telephony, but we'd be totally content with a couple rounds of Halo in this thing.

In this article: 3d, 3d display, 3dDisplay, led, panoramic, STEReoscope, stereoscopic, tokyo, twister, university
All products recommended by Engadget are selected by our editorial team, independent of our parent company. Some of our stories include affiliate links. If you buy something through one of these links, we may earn an affiliate commission.
Share
Tweet
Share