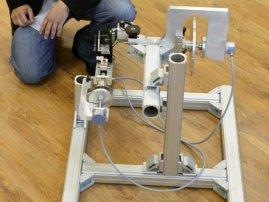 Here we go, after months of doubt over claims of a magnetic machine promising "infinite clean energy," Steorn will be putting their wares on display for public scrutiny in London. A physics defying perpetual machine, if you will. Starting tomorrow, rumor has it that the Kinetica museum will host the Orbo device for a ten day long public demonstration of the technology. We're expecting a formal announcement at 6pm 11pm London (1pm 6pm New York). iPhone shmiPhone, this is going to be good.

Update 1: Still nothing from Steorn yet, but Irish RTE News has also "confirmed" the impending announcement. Moreover, a "very simplified version" of the technology will be viewable by streaming media over the Intertubes. So get ready kids, they say you'll be able to watch janky video of a prototype "lifting a weight" from four different angles starting at 6pm London Eastern Time. Otherwise, you can view the device live at Kinetica from Thursday 5 July to Friday 13 July.

Update 2: First picture of the mystical device! [Thanks, Jordy]

Update 3: CEO Sean McCarthy tells SilconRepublic how it works. Namely, the time variance in magnetic fields allows the Orbo platform to "consistently produce power, going against the law of conservation of energy which states that energy cannot be created or destroyed." He goes on to say "It's too good to be true but it is true. It will have such an impact on everything we do. The only analogy I can give is if you had absolute proof that God wasn't real." Whoa. Link to demonstration site now added below.

Update 4: Well, 6pm London time has come and gone. However, Steorn's site now says that the video will go live at 6pm "Eastern Time." Apparently, their demo is aimed at the US. A fossil-fuel Independence Day? Riiiiight.

Update 5: Jeebus, what a non-event. Even though they wield supreme control over the laws of physics, Steorn had to cancel tonight's event "due to technical difficulties." We'd laugh if it wasn't so pathetically tragic. The live stream is now rescheduled ambiguously to the 5th July. Now move along folks, there's nothing to see here.

Read -- Kinetica museum (not announced yet)
Read -- rumored announcement
Read -- world's first "free energy" live demo (just not live yet -- hey is Orbo powering the London Eye!)
In this article: breaking news, BreakingNews, orbo, steorn
All products recommended by Engadget are selected by our editorial team, independent of our parent company. Some of our stories include affiliate links. If you buy something through one of these links, we may earn an affiliate commission.
Share
Tweet
Share