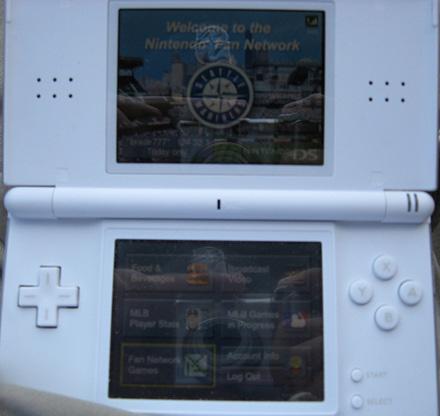 Those looking for a little more interaction at Safeco Field this season need only bring their DS Lite and a few extra bucks. This season, Nintendo is trialing the Nintendo Fan Network at the home of the Seattle Mariners, which enables onlookers to "order food and drinks, watch the live television feed of the game, access stats and scores, and play trivia from the comfort of their seat." The quietly introduced pilot program has brought several kiosks to the park, which uploads a program to the DS Lite and enables the WiFi-equipped handheld to take part in the bonus festivities. Eventually, the Big N hopes to expand the system into other stadiums, but for now, Mariners fans can get in on the action for $5 per game, or $30 for ten games.

[Image courtesy of Flickr]
In this article: cisco, DS Lite, DsLite, fan, interactive, Major League Baseball, MajorLeagueBaseball, Mariners, mlb, nintendo, Nintendo Fan Network, NintendoFanNetwork, pilot, research, Safeco Field, SafecoField, seattle, study
All products recommended by Engadget are selected by our editorial team, independent of our parent company. Some of our stories include affiliate links. If you buy something through one of these links, we may earn an affiliate commission.
Share
Tweet
Share