Creating the first 3D map of the heart's 'brain' 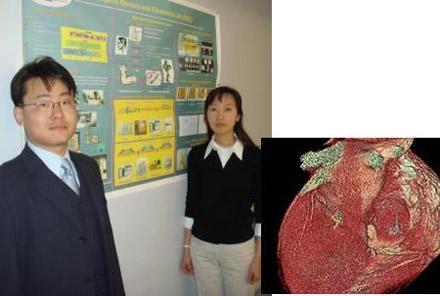 Have you ever been halfway through a heart attack and thought "If only my shirt had been laced with wireless sensors that monitored respiration and body temperature, this cheese-stick-related incident might have been prevented"? Well now, next time you have one-too-many wings while tailgating, a fabric developed by researchers at the University of Arkansas might be able to alert medical professionals to your condition before you go code red. The technology, based around an "organic semiconductor" called pentacene (a hydrocarbon molecule) and a comparative instrument known as a Wheatstone bridge, can be embedded in fabrics such as undershirts and coupled with wireless transmitters. In the garments, body temperature is monitored through a thin-film transistor, while respiration is gauged using electrical resistance, but both technologies employ the pentacene as a sensing layer. Researchers hope to further develop the technology so that doctors can get to you long before you eat a fatal piece of cheesecake.

[Via Medlaunches, thanks, Geetu]
In this article: heart, medical, monitoring, pentacene, research, respiration
All products recommended by Engadget are selected by our editorial team, independent of our parent company. Some of our stories include affiliate links. If you buy something through one of these links, we may earn an affiliate commission.
Share
Tweet
Share